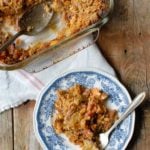 Rhubarb Crisp is an easy, relaxed dessert recipe perfect for rhubarb season! This family recipe has a little twist with a ‘secret ingredient’ that makes the topping taste and crunch like toffee. 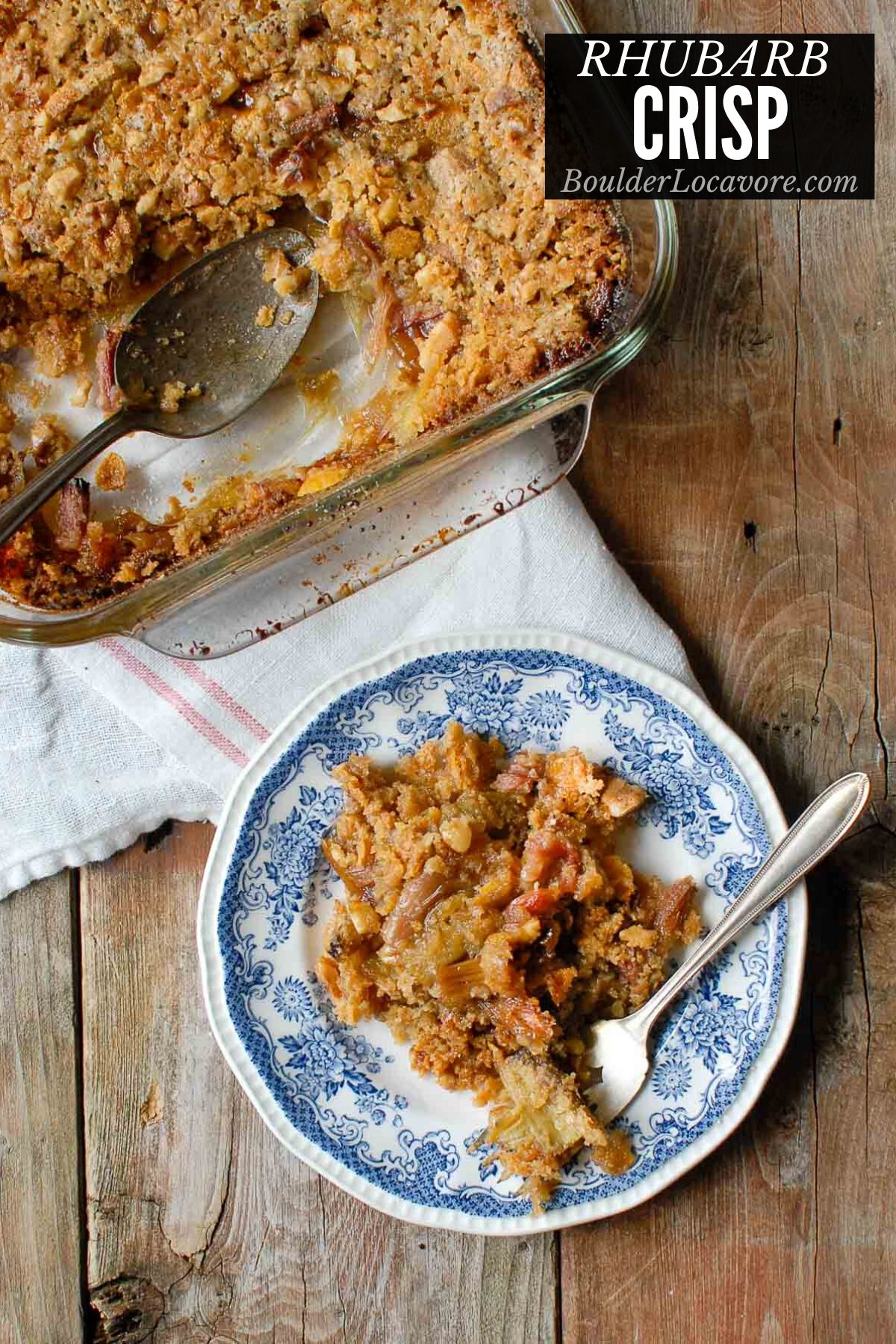 Rhubarb is only in season for a short time and this is the dessert you’ll want to make with it!

Rhubarb Crisp is easy to make.

It’s not a fussy dessert but is bursting with rhubarb flavor with a delicious topping!

If you are looking for down home comfort food, this is it!

What is Rhubarb Crisp?

A ‘crisp’ is in the family of Americana desserts like cobbler, pandowdy, slumps and crumbles.

The Rhubarb Crisp is a relaxed easy dessert that is perfect with a scoop of vanilla ice cream on top!

This Rhubarb Crisp recipe is special for multiple reasons!

This one in particular is straight from my grandmother’s recipe box.

Most crisp recipes use rolled oats. This one uses crushed Cornflakes cereal!

This gives the topping a sweet flavor and distinct crunch!

The mixture of the topping ingredients forms a toffee topping when it has baked and cooled.

Both in texture and flavor.

The crisp bakes to be less than one inch deep making it a scoopable dessert.

Pile it onto a plate and top with ice cream if desired.

If you want a pretty dessert, try Strawberry Shortcake. 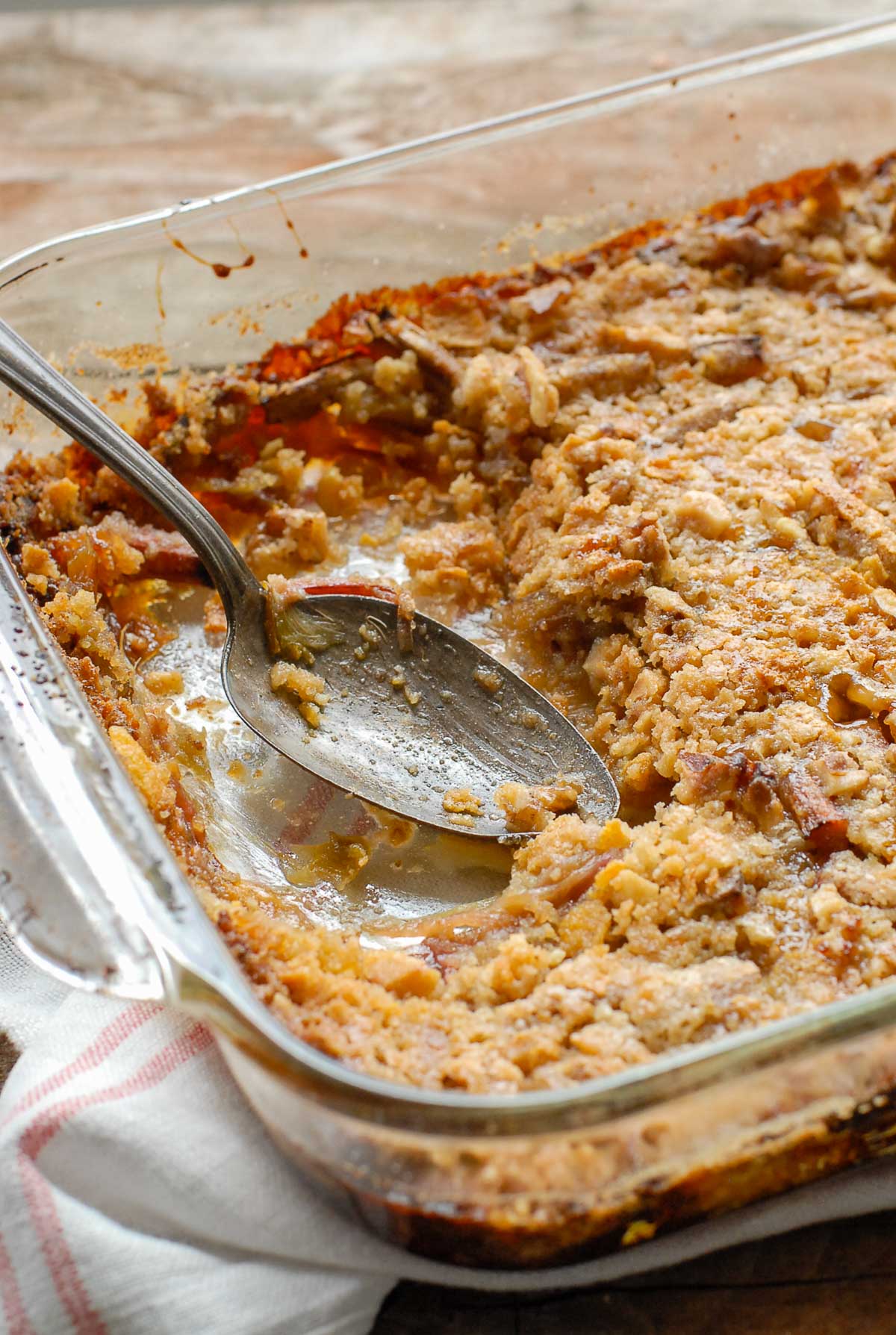 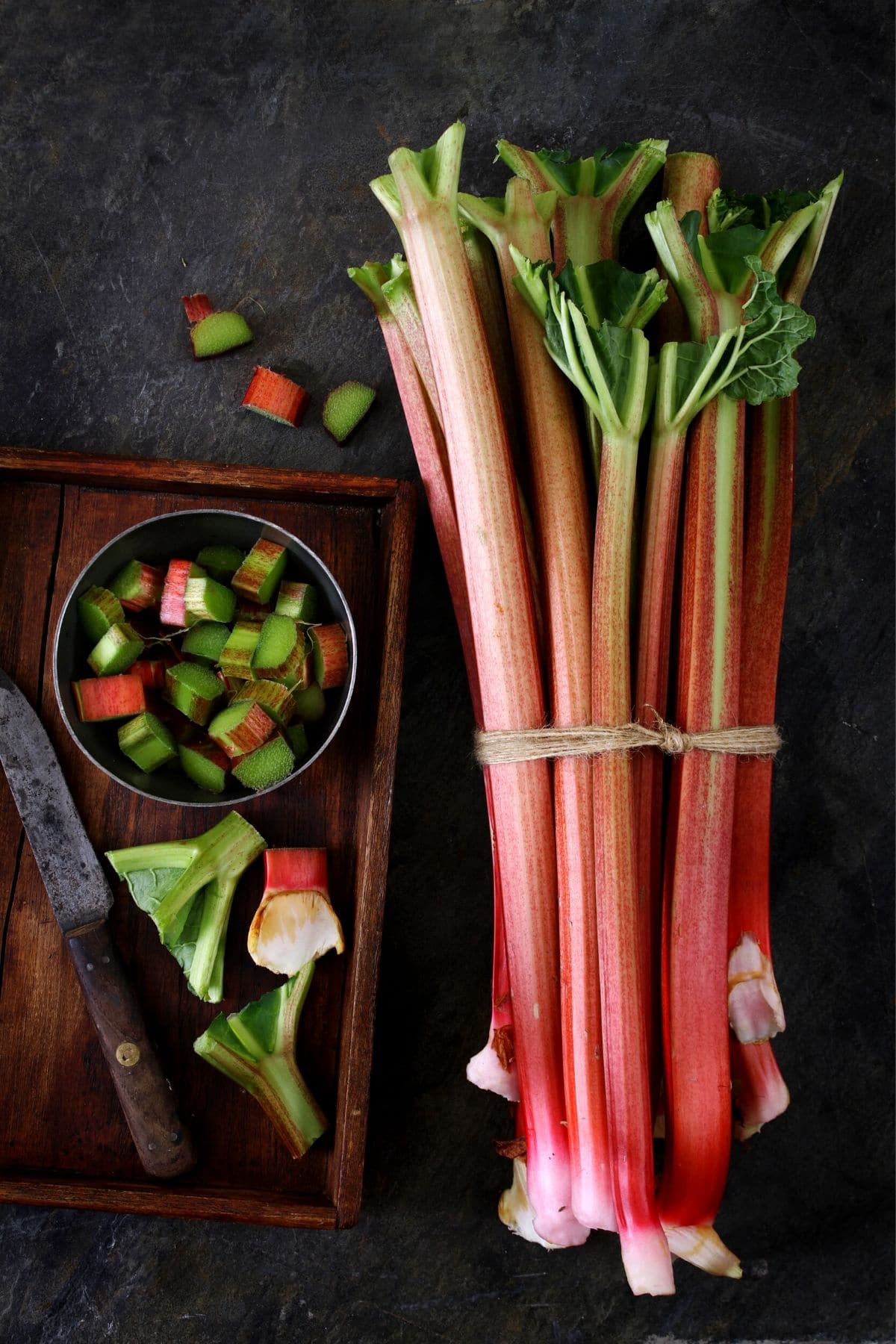 This recipe is perfect for fresh rhubarb.

Rhubarb is very tart and not edible without cooking it.

Also the leaves of the plant are poisonous and should never be eaten.

When is Rhubarb in Season?

In the United States rhubarb is grown either outside or in a hot house.

The availability of the two types overlaps making rhubarb available from around March through July.

Either regular All Purpose Flour OR gluten-free measure-for-measure flour blend may be used.

Regular or gluten-free cornflakes cereal may be used.

STEP 2: Cut the rhubarb into 1-inch pieces and place them in the prepared pan. Drizzle with honey and salt. Bake until tender approximately 30-40 minutes. 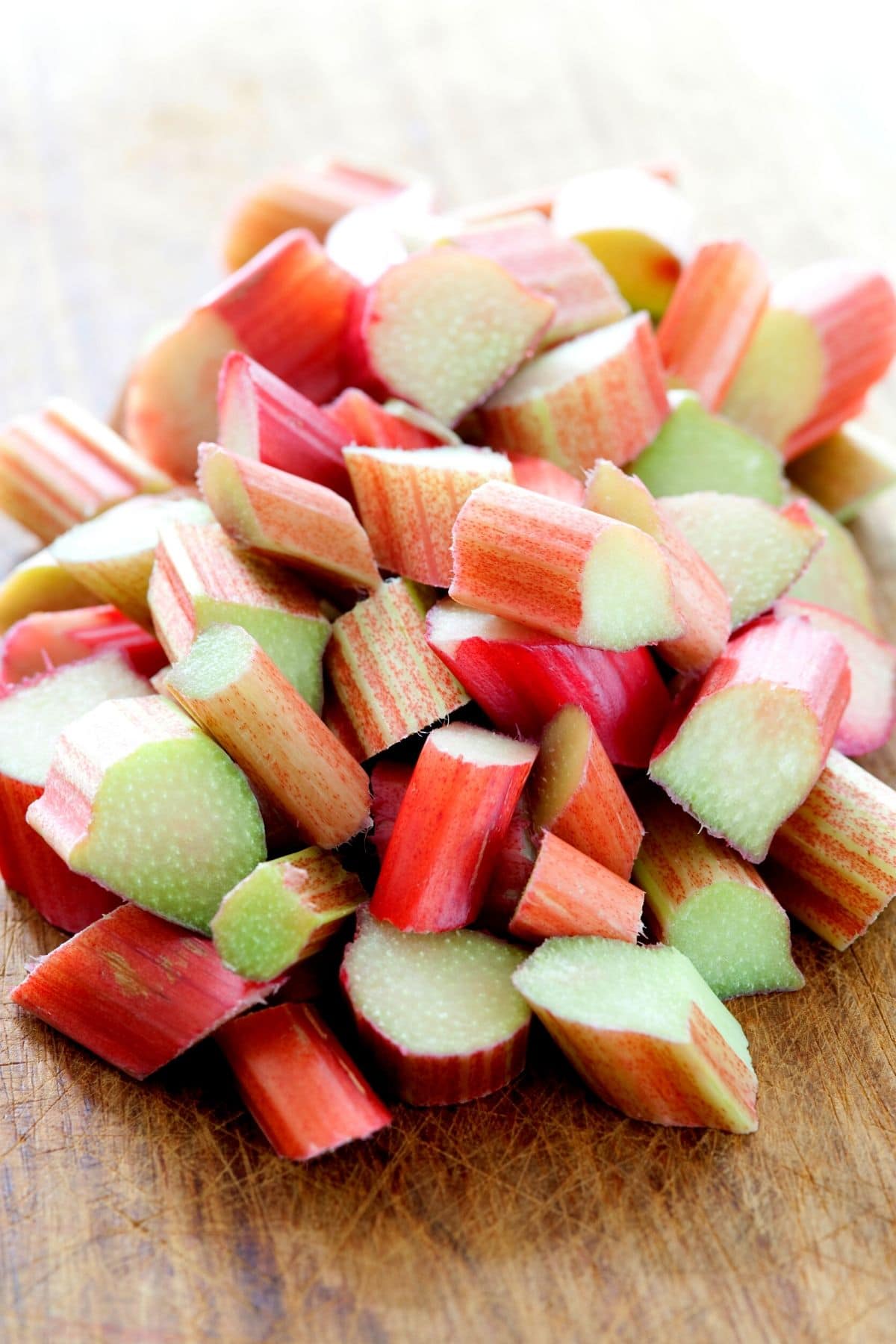 STEP 3: While the rhubarb bakes, combine the following in a large mixing bowl: flour, brown sugar and butter. Use a pastry blender to cut the butter into the other ingredients forming a coarse texture like small stones.

STEP 4: Mix in the cornflakes and nuts.

STEP 5: Sprinkle the topping mix over the rhubarb and bake uncovered at 400 degrees F until the top begins to brown (aproximately 15 minutes).

STEP 6: Remove and allow to cool almost to room temperature. NOTE: this allows the top to become crunchy.

Rhubarb Crisp is best eaten when freshly made.

Leftovers can be stored for 3-4 days in an airtight container in the refrigerator.

The topping won’t be as crunchy but it will still be delicious.

I do not recommend freezing this Rhubarb Crisp recipe. 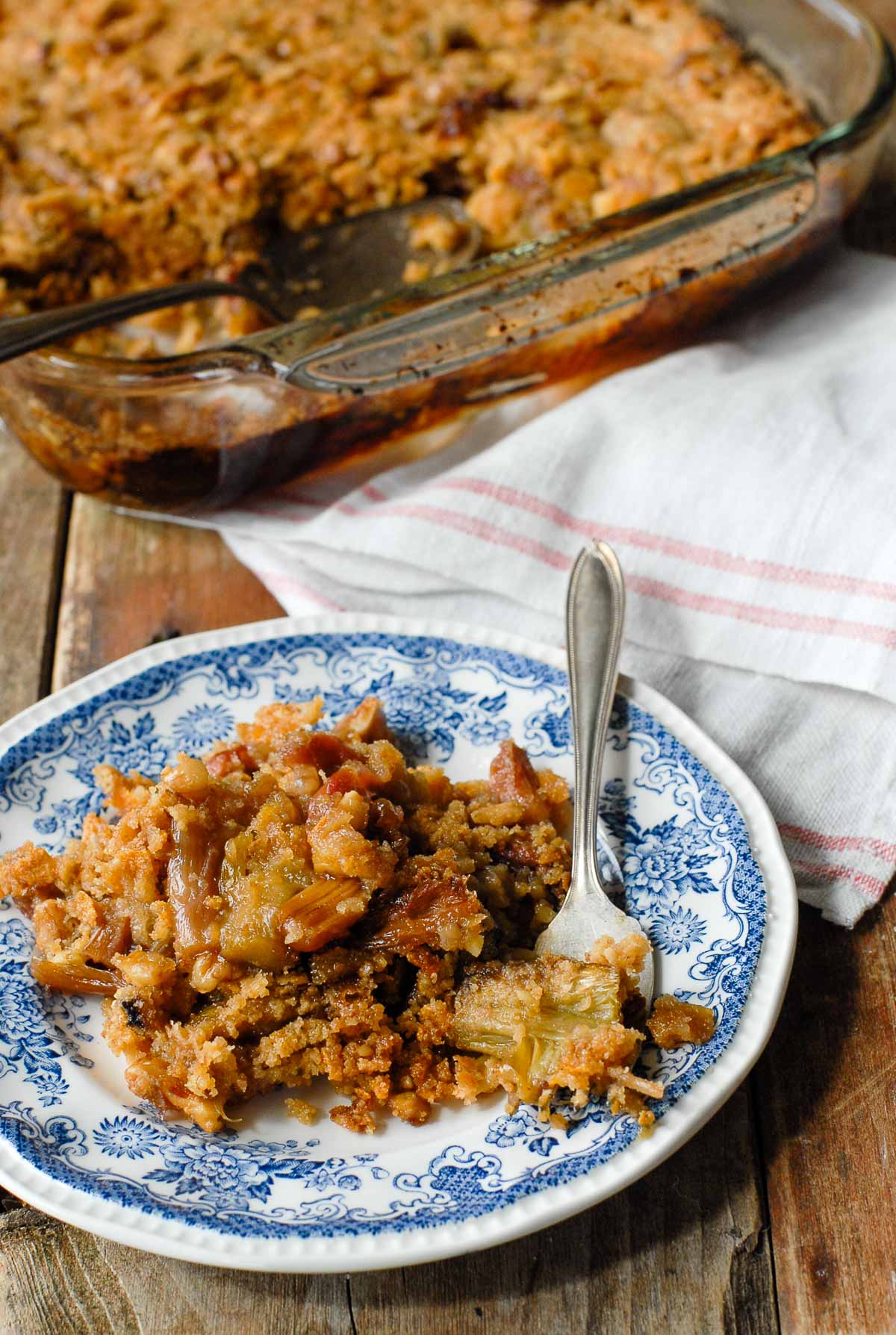 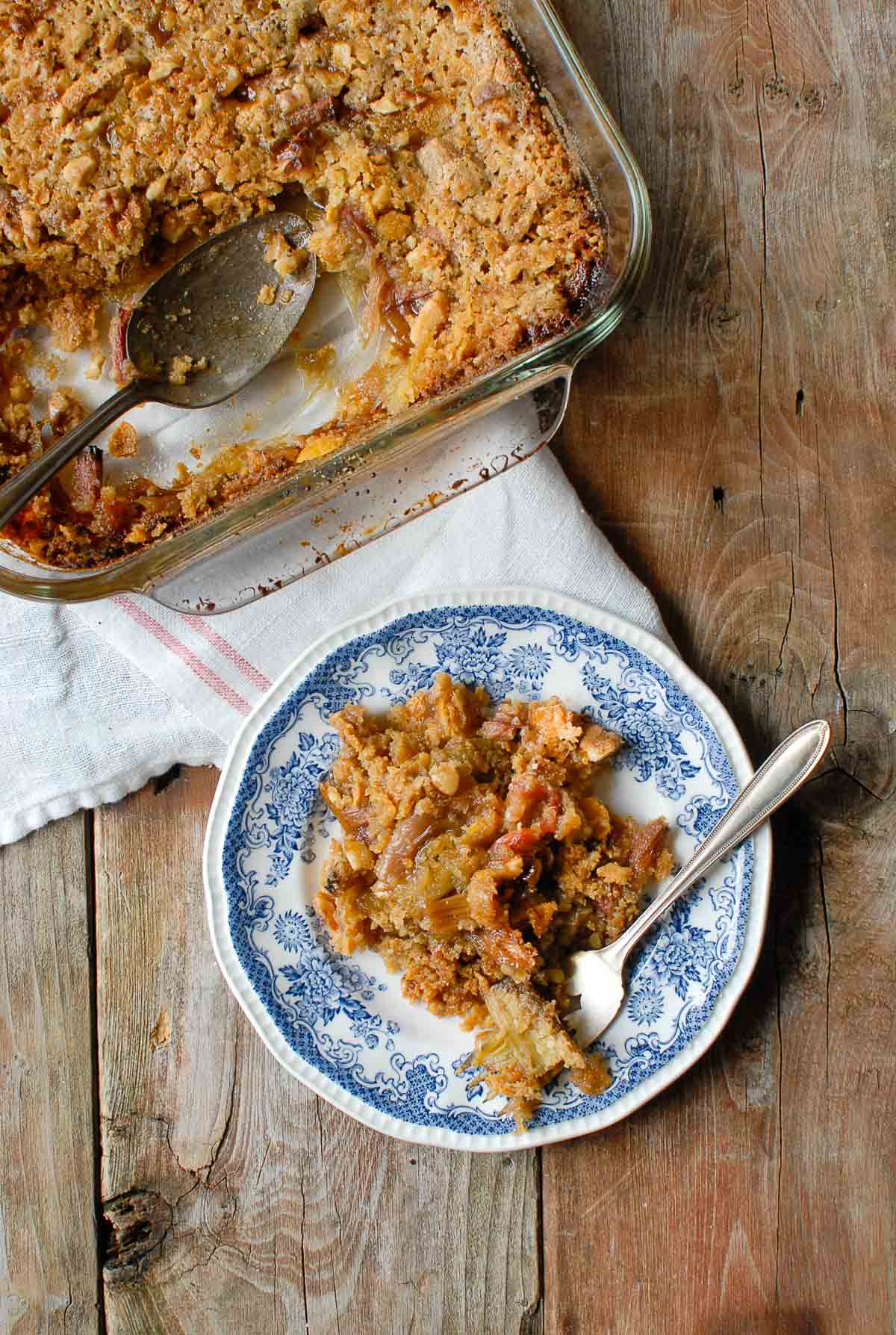 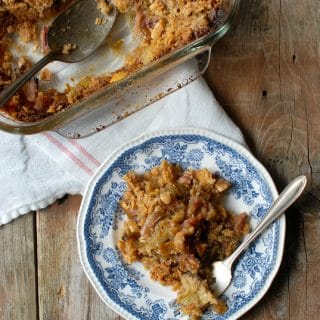