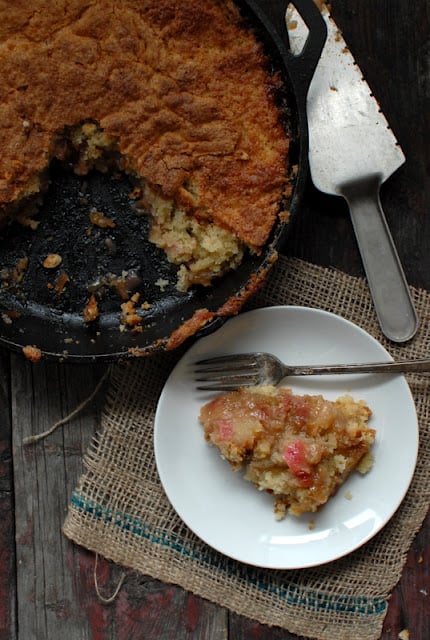 Our Farmer’s Market has now been open for a few weeks and the parade of fresh things has begun again.  Something I’ve appreciated about eating as a locavore is the specific period of time a given produce item is available.  I realize it seems that it might be more convenient to have things available indefinitely but you can liken it to a favorite holiday; if it was around all year, the spikes of appreciation of what comes with it would be missing.
Over the winter I grouped newly discovered vintage recipes into mental categories by fruit or vegetable, waiting for the right timing to give them a whirl.  With the onset of rhubarb I’ve dipped into the wooden recipe box that produced Dark Honey Cake to try my hand at Rhubarb Upside Down Cake.  The recipe resides on a fragile, browned newspaper clipping I’m guessing from the 1930’s after seeing dates in that range on similarly aged clippings in the box.
The recipe suggests the cake can be prepared in a pan or skillet.  I have not prepared an upside down cake in a skillet before but feeling I’d ‘right side up’ piece by piece, rather than turning out the cake in its entirety, I ventured that method.  I felt the rustic use of a cast iron skillet mirrored the charm of the original recipe.  The cake is delicious with exactly the right amount of tartness from the rhubarb. 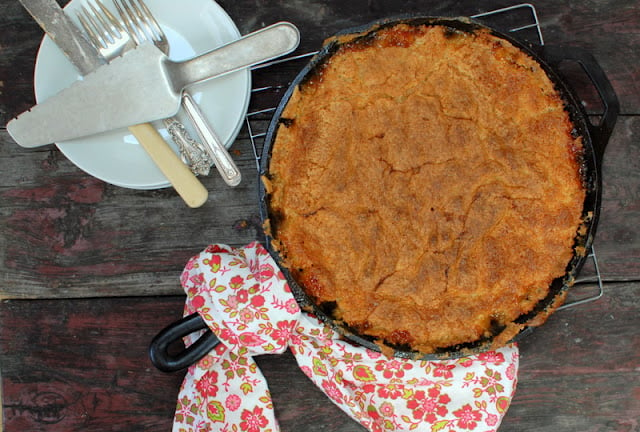 RHUBARB UPSIDE DOWN CAKE
Based on other upside down cakes I’ve made, if you would like to turn out the entire cake I would suggest using a 9-10 inch pan (square or round), placing the pan in the heated oven for the first step of melting the sugars and butter.  Then proceed with the rest of the recipe not using the stove top.  Suggested instructions to free the cake from the pan after it is baked are included at the end of the recipe below.
Cooking and preparation time: About one hour
Ingredients:
·         ½ cup light brown sugar
·         ½ cup plus 1 cup granulated sugar
·         ½ cup butter
·         4 cups rhubarb, trimmed and rough chopped
·         Nutmeg, sprinkle, preferably freshly grated
·         1 cup heavy/whipping cream
·         1 egg
·         1 ½ cup flour (gluten free or regular)
·         2 teaspoons baking powder
1.       Preheat the oven to 350 degrees.
2.      (This method uses a skillet and does NOT turn the entire cake over at the end.  If you would like to use a pan or turn the cake over, see header notes above).  In a 10 inch oven proof skillet (I used cast iron), melt brown sugar, ½ cup of the granulated sugar and the butter over medium heat stirring occasionally.
3.      While the sugar and butter are melting, in a large bowl combine the remaining 1 cup of sugar, cream, egg, flour and baking powder; stir until fully combined.
4.      When sugar-butter mixture is completely melted, add the rhubarb and stir to combine.  Sprinkle with nutmeg.
5.      Spoon the cake batter over the rhubarb mixture and spread to cover as much as possible (note: the batter is thick more like a biscuit batter so try to form a layer but it will end up cooking together so don’t worry of there are some spots open).
6.      Cook for 40-45 minutes.  Cake is done when a toothpick inserted in the middle comes out clean and the cake has begun to brown on the top.  Allow to cool before slicing.  When serving turn the slice over on the plate, exposing the rhubarb side on the top.  Fabulous with a scoop of Vanilla Bean ice cream!
TO REMOVE FULL CAKE FROM A PAN:  If you have baked the cake in a pan and wish to turn the entire cake over, allow cake pan to cool for 5 minutes on a cooling rack (note: do not allow it to sit longer or it may be difficult to remove from the pan). Run a dinner knife along the sides of the pan to ensure it is freed up and turn onto a serving plate. Be careful as the cake and pan will still be quite warm. Cool about 45 minutes.
Recipe attribution:  Mrs. Clarence Hicks 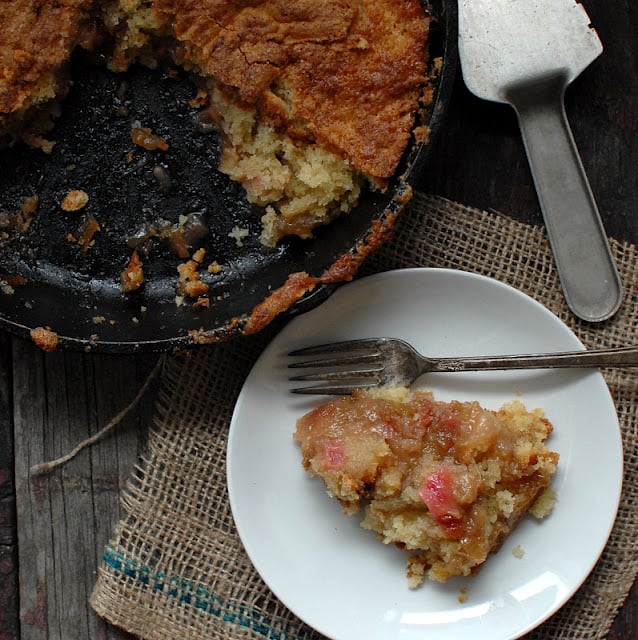