There is nothing better than an easy, homey dessert made with seasonal fruits in my opinion. Plum Slump (don’t let the name turn you off) is an Americana classic dessert recipe that is a cinch to make and even better to eat!

I have a personal soft spot for vintage recipes, often reinvigorating those from my multi-generational family recipe box or from vintage recipe collections I’ve purchased online. I’m not a fussy baker; I admire a pristine, flawless Martha Stewart caliber cake but it’s just not in my DNA to produce one myself. I also love a rustic recipe that seems like real people have and would enjoy eating it. This Plum Slump recipe is no exception.

For quite some time I’ve been enchanted with rustic Americana desserts gone by the wayside. Their names are captivating and strange; Pandowdy, Brown Betty, Grunt, Slump and Buckles. Each name has very practical roots despite not leaving the dish sounding incredibly enticing! These desserts all center on seasonal fruit, are generally simple and fast to prepare (all the better in my book).

It is plum season in Colorado and despite sounding like a dish featuring fruit with bad posture this Plum Slump is a lovely dessert; not too sweet, simple and relaxed. This same recipe is either known as a ‘Slump’ or a ‘Grunt’ depending on where in the U.S. it is consumed.

The south would call it a slump because as it cooks, the sweet dumpling atop the fruit relaxes into a slump. In New England it’s referred to as a ‘grunt’ due to the sound made by the steam escaping through the dumpling as it cools. Regardless of the less-than-tantalizing names, the dish stands on its own and does not disappoint!

This is a very versatile dessert really able to be made with any type of fruit or a fruit mixture. Instead of varying from the plums I used four varieties turning the thickened fruit on the bottom a gorgeous red tone. The recipe calls to simmer the fruit then add a bread topping which cooks into a soft, sweet dumpling. 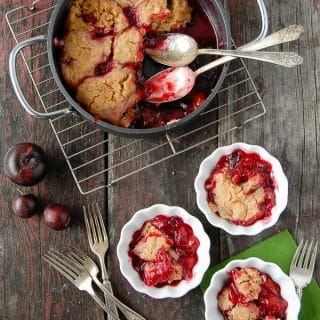 Plum Slump is a fantastic, relaxed dessert to ease into fall. The combination of fresh simmered plums and a sweet biscuit topping is homey and easy to make. Since this recipe was originally shared as part of a Guest Post in the UK, I’m including a a conversion chart for those outside the U.S. to adapt the measurements. Gluten-free or gluten flour may be used.
5 from 3 votes
Print Save Recipe Recipe Saved! Pin Rate
Course: Dessert
Cuisine: American
Prep Time: 10 minutes
Cook Time: 25 minutes
Total Time: 35 minutes
Servings: 6 -8 servings
Calories: 251kcal
Author: Toni Dash
Prevent your screen from going dark

*should you want to experiment a bit, substituting a light dessert wine for some or all of the water would add some unique flavor to the plum mixture.

This post has been updated from its original publication in September 2012 as a Guest Post for blogging friend and colleague Caroline Taylor, creator of All That I’m Eating in Berkshire England. We met online and found a kinship through our mutual love of Farmer’s Markets, seasonal eating, developing recipes from our personal garden’s bounty and infusing liquor. I’ve recreated such things as Hedgerow Gin which Caroline guided for Colorado substitutions to the traditional ingredients. I have fancied her Victoria Sponge Cake with Strawberry Balsamic Jam for years, admiring its ingredients combined by weight rather than specific measurements. Caroline shares recipes, dining reviews and travel on All That I’m Eating. Here is the link to the original Guest Post.