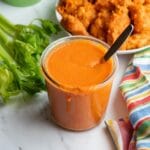 Tangy, spicy Buffalo Sauce is a classic and so EASY to make at home. It takes only 5 minutes! This version has passed the ‘die hard friends from Buffalo’ test as being very close in flavor to the original secret recipe. 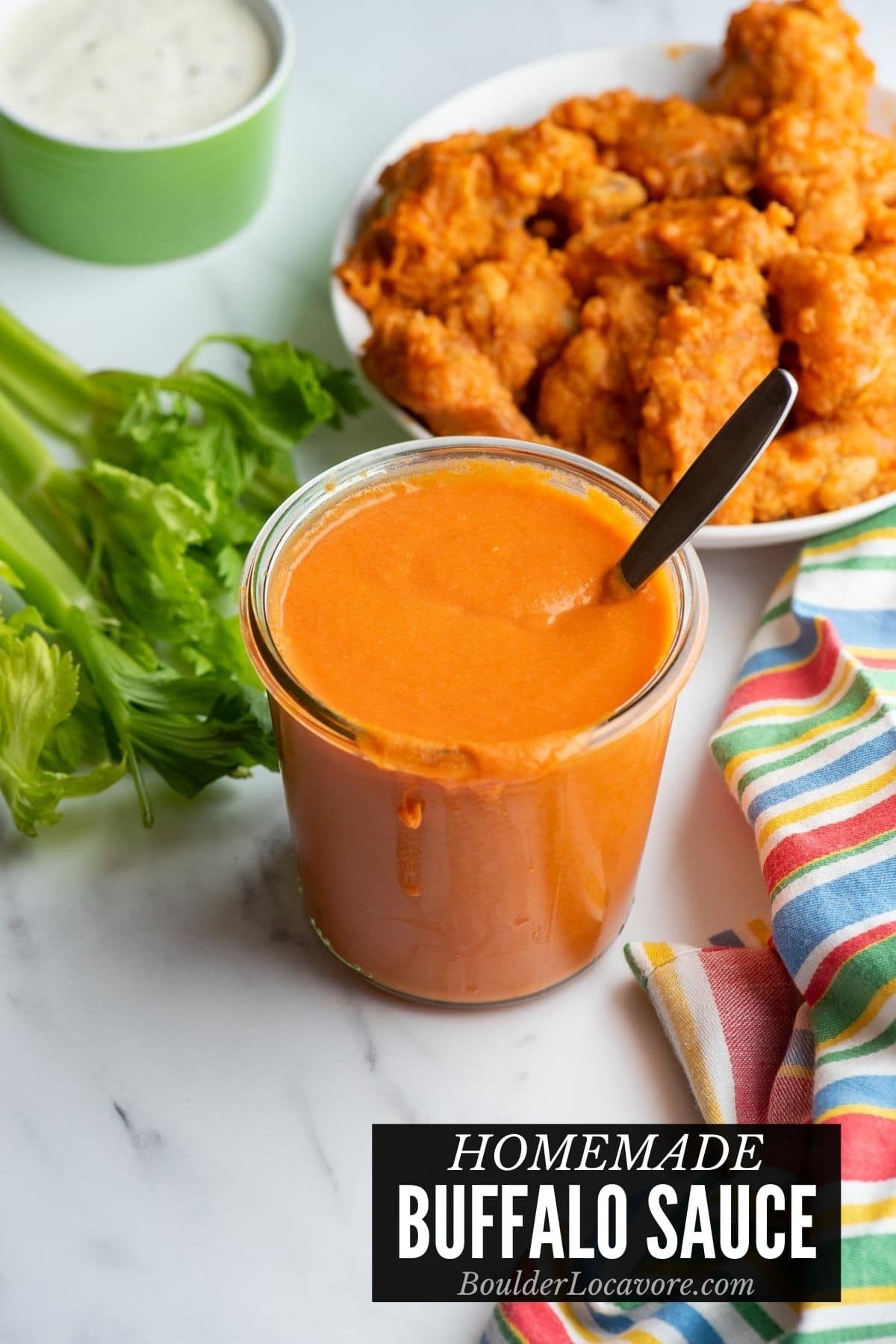 Every person I’ve ever known from Buffalo New York has been passionate about two things: bowling (and/or hockey) and Buffalo Wings.

No surprise since buffalo wings were invented there.

After a great deal of research and experimentation I’ve come up with a homemade Buffalo Sauce that has passed the test of my friends from Buffalo.

It’s perfect for wings but so many more things. Suggestions included below!

It’s fast and easy to make at home.

Why is it Called ‘Buffalo Sauce’?

Because of where it originated. The Anchor Bar in Buffalo New York is the home of the original buffalo wings.

One evening in 1964 some friends of the bartender came in late and starving. He asked his mother to whip something up for them.

Low on options late at night, she deep fried some chicken wing portions with a ‘secret sauce’ and the rest is history. 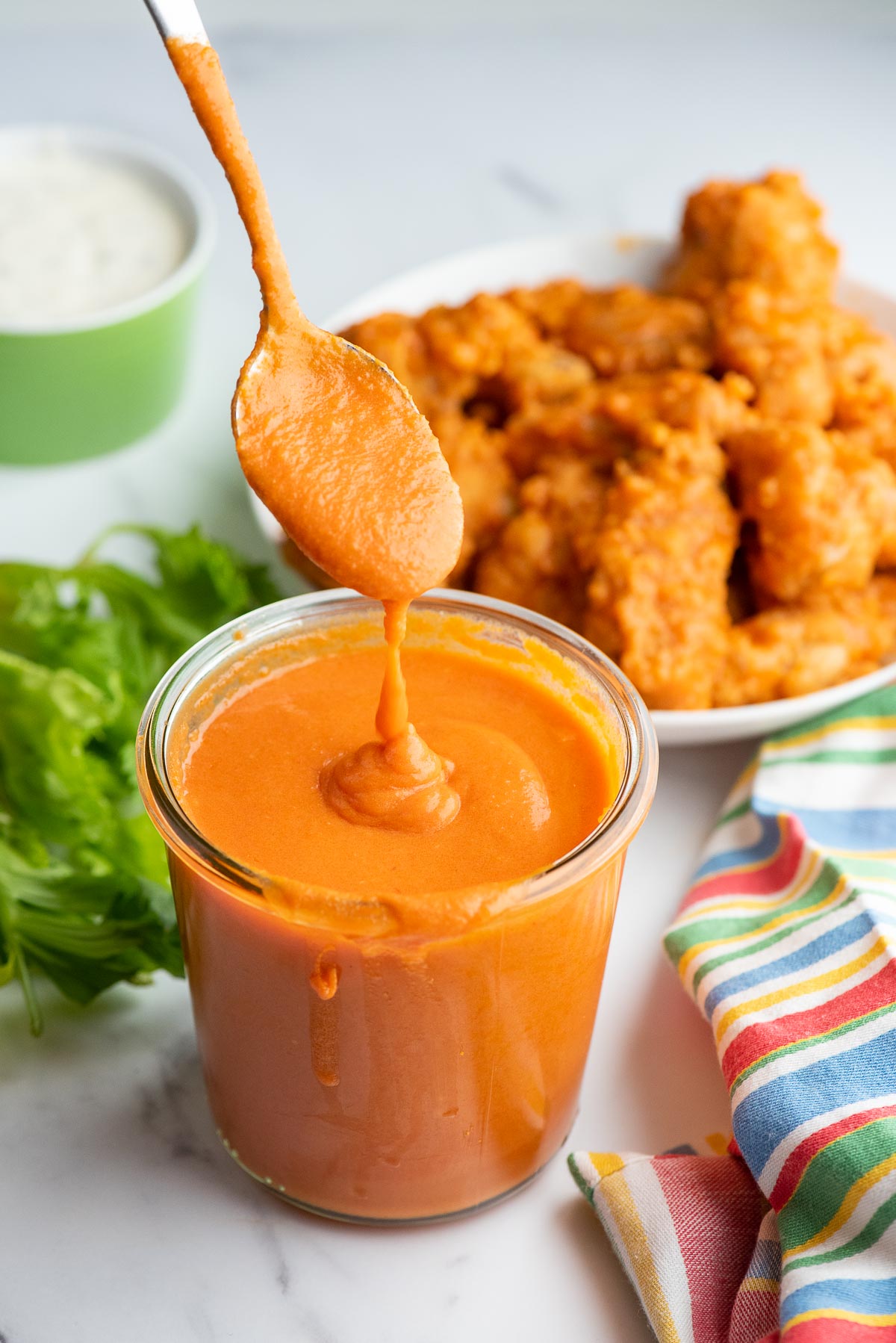 What IS Buffalo Sauce?

It’s a tangy, spicy sauce. Think hot sauce with vinegar and some seasonings to make the flavor deep and delicious.

The original buffalo sauce recipe has never been published.

However locals often have a friend, or friend of a friend, who will tell you buffalo sauce has to be made specifically with Franks HotRed Original Cayenne Pepper Sauce.

They insist that was in the original sauce and that it’s a crime to make it with any other hot sauce.

Frank’s hot sauce packaging also says: “The great flavor of Frank’s RedHot made it the secret ingredient used in the original Buffalo Wings created in Buffalo, N.Y. in 1964.”

It’s a medium hot sauce with an earthy cayenne flavor. It makes a delicious base for the recipe. 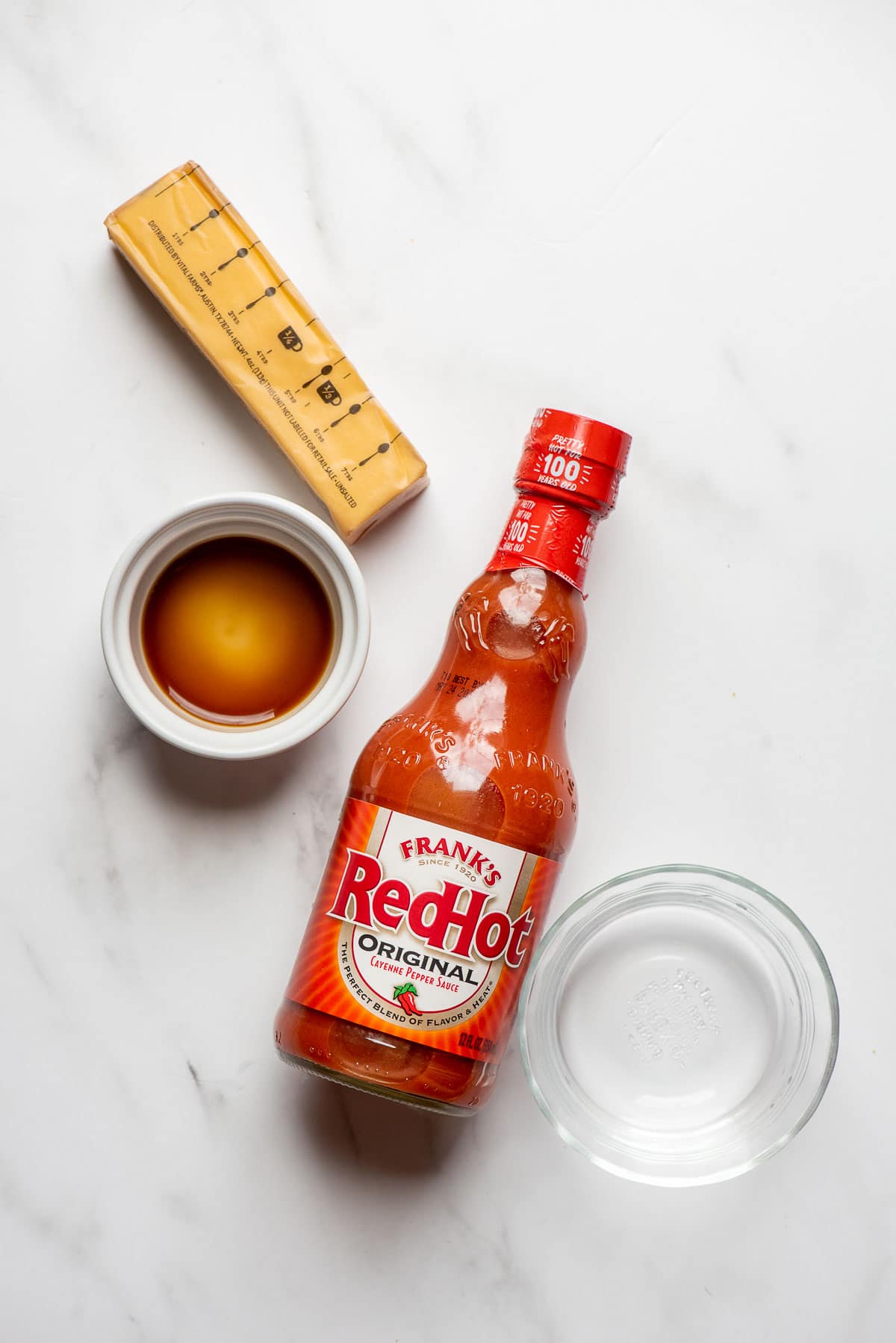 The recipe is really simple especially when using Frank’s Hot Sauce as a main ingredient.

Some maintain all that is needed is the hot sauce and butter but I think this combination is truer to the real original sauce:

How to Make it Spicier

This recipe is medium spicy. For those who want a super hot sauce add 1/4 teaspoon Cayenne Pepper to the sauce.

Always taste before adding spices to not over add spices.

It will take less than 5 minutes to make this delicious sauce!

STEP 1: In a saucepan over LOW heat, melt the the butter. Do not allow butter to simmer or boil. REMOVE FROM HEAT.

NOTE: if the butter is hot when added to the other ingredients the sauce will not mix together well. 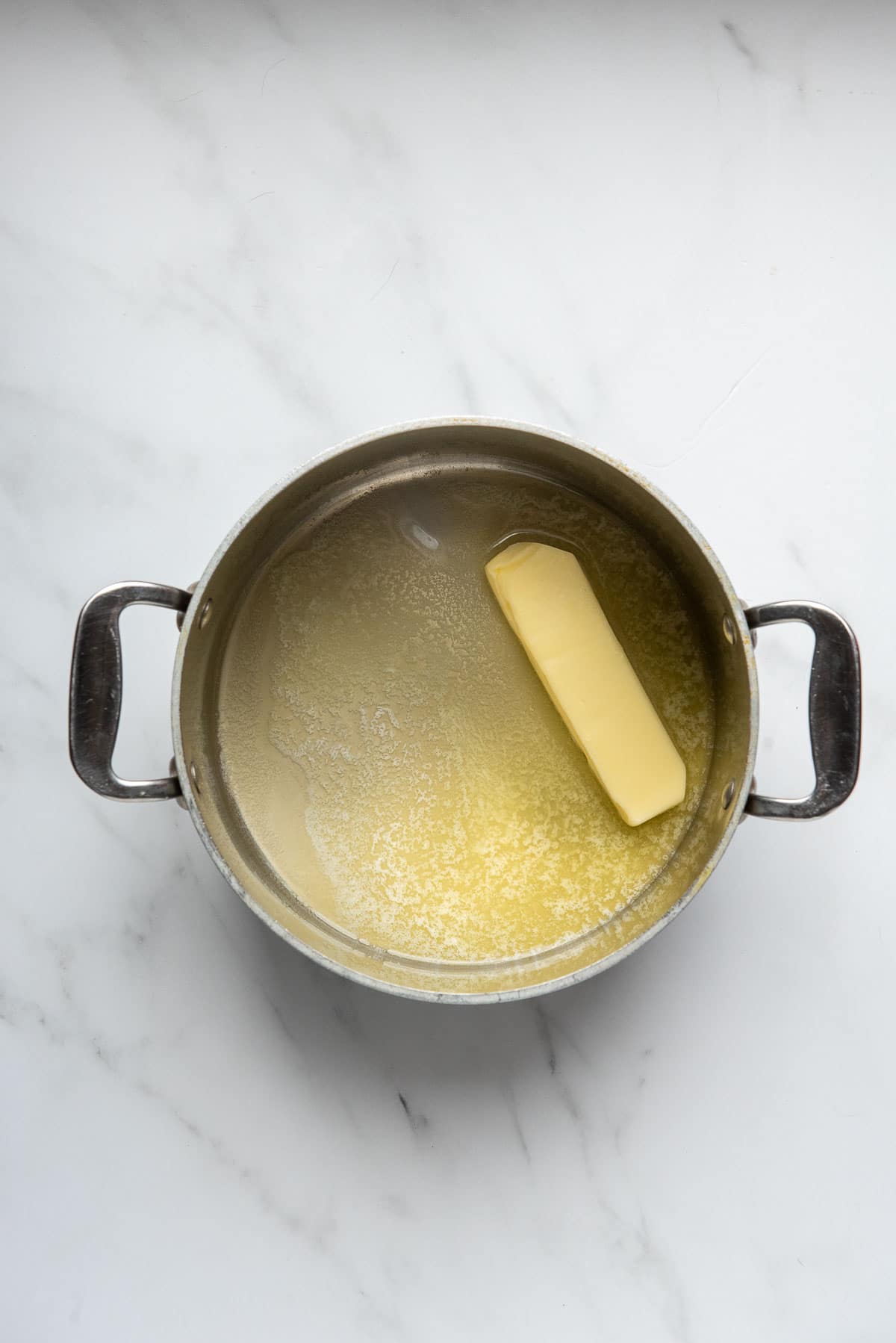 STEP 2: (Off the heat) Add the rest of the ingredients: Frank’s hot sauce, distilled white vinegar and Worcestershire sauce. 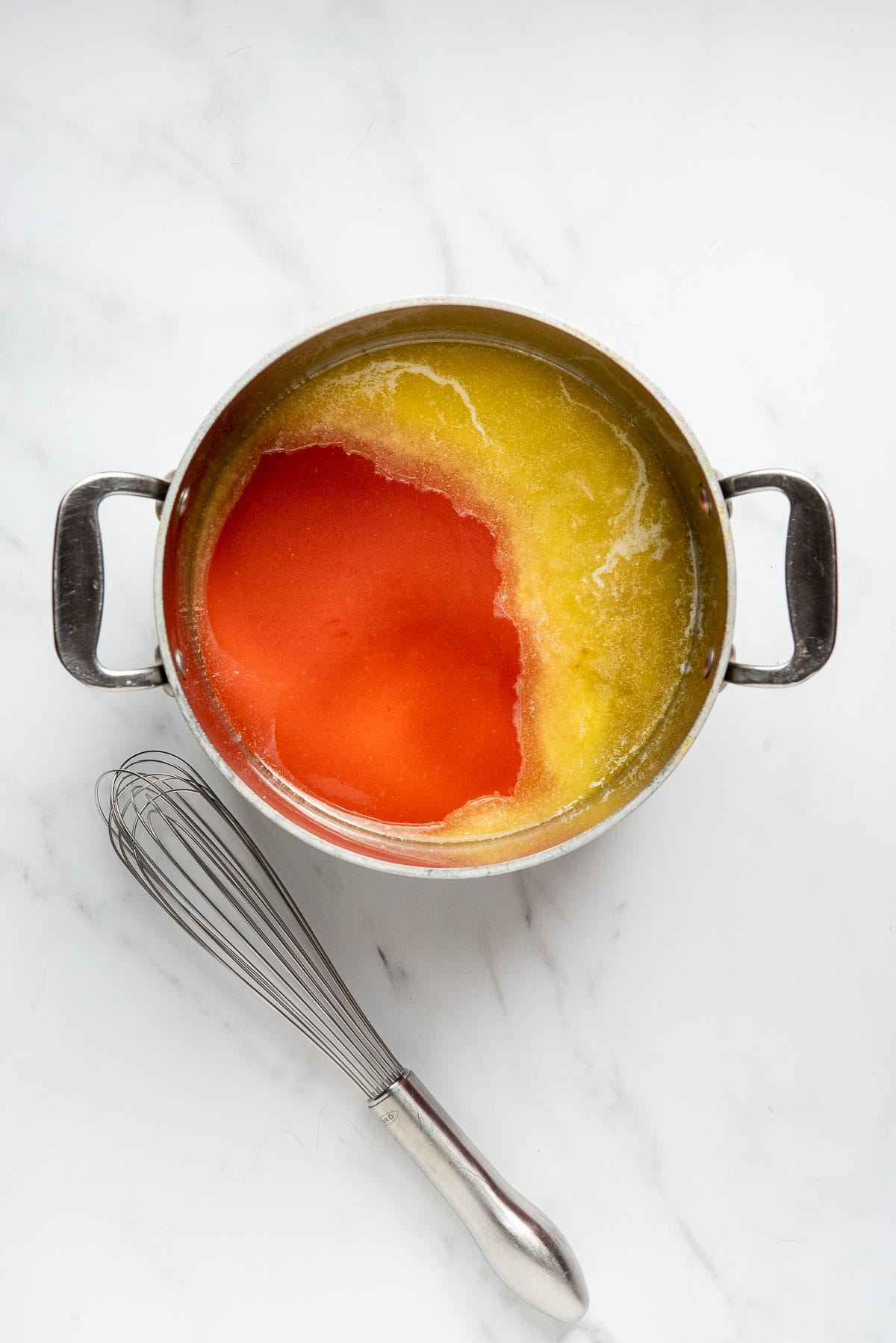 STEP 3: Whisk until the sauce fully incorporates and is smooth. 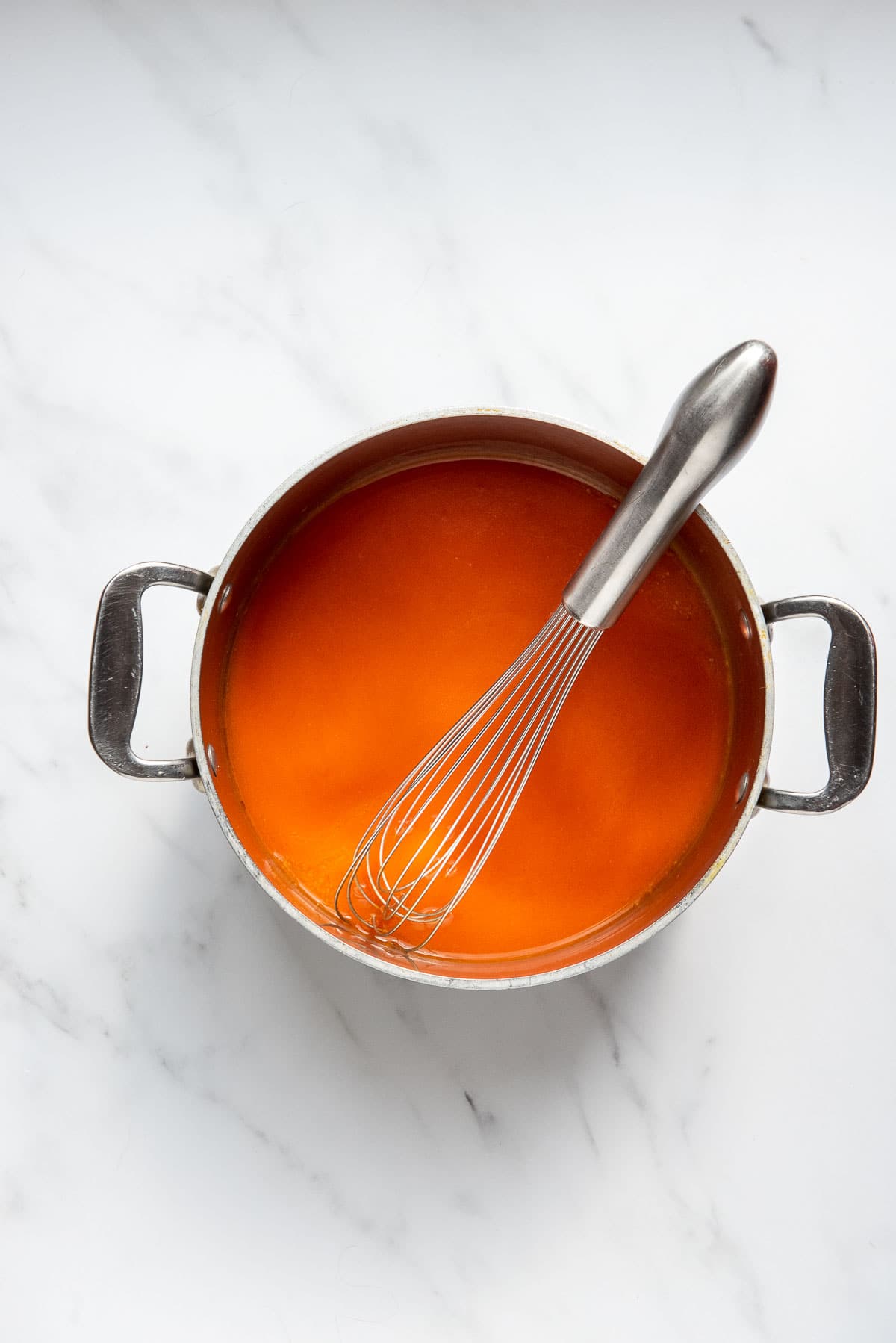 Try some Honey to sweeten the sauce

How to Use it

Recipes to Use it 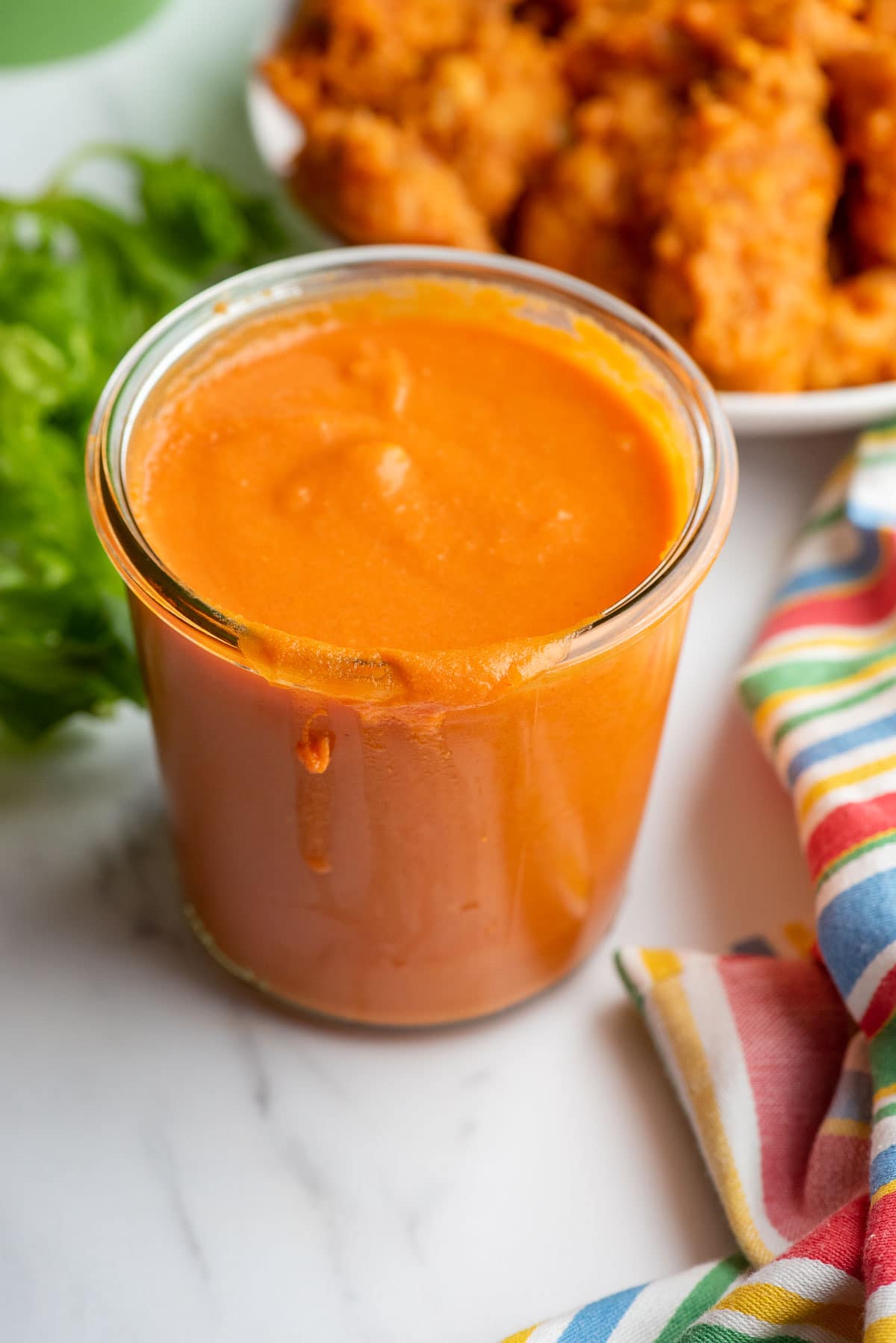 Do not keep the butter on the heat and add the additional ingredients. The sauce will ‘break’ or separate and will not fully combine.

The butter may also be microwaved to melt it and then the other ingredients whisked in. The sauce will not be warm if doing this however.

Store sealed in a glass container for up to 1 month.

It should not separate when sealed but if it does, stir to combine.

To reheat do so over low heat so the sauce does not separate. 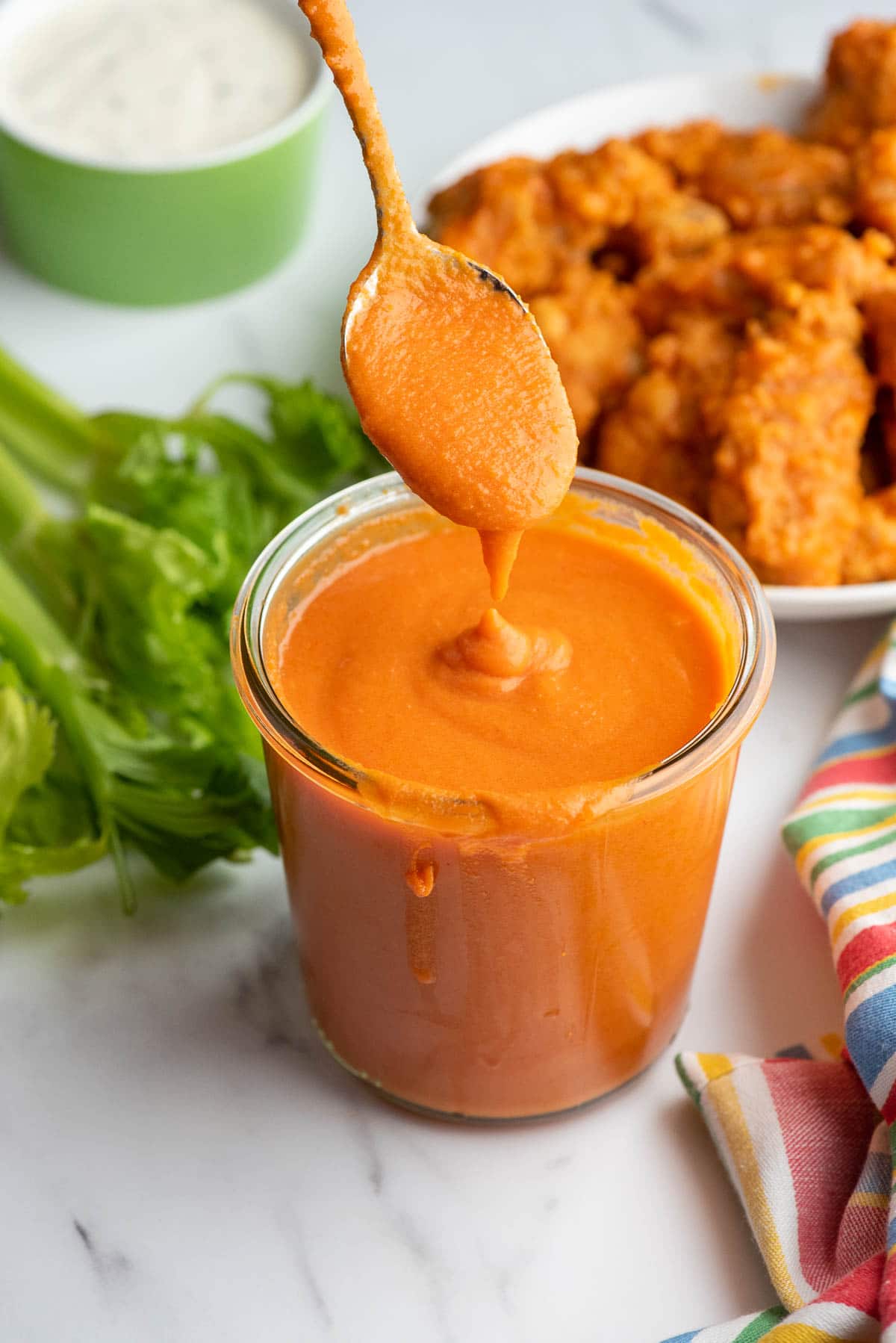 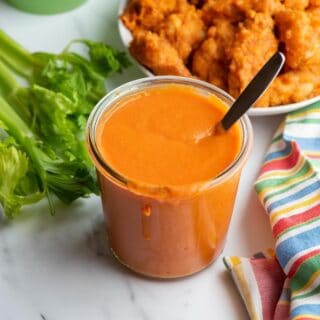 Optional (to make it hotter/spicier)