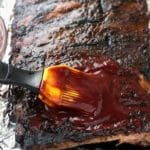 St. Louis Ribs are a favorite during grilling season. This shortcut method takes hours out of the process too! Slathered with Homemade barbecue sauce made with whiskey and blueberries that’s spicy, tangy, sweet, and delicious!

Ribs are always a favorite during grilling season.

Normally they take 3-4 hours to make but this Shortcut Method has them on the table in about 60 minutes!

What are St. Louis Ribs?

St. Louis-Style Ribs are a pork spareribs that are trimmed to be rectangular removing any excess cartilage.

They are flatter than baby back ribs which makes them easy to brown.

There is also less meat but higher fat so the flavor is fantastic!

St. Louis Ribs are more affordable rib than baby back ribs too.

A ‘rack’ of ribs is a group of ribs still attached to each other.

Ribs are cooked in a rack then sliced into separate ribs for serving.

How Many People Does a Rack of Ribs Feed?

St. Louis Ribs are usually around 2 1/5 pounds per rack.

One rack serves between 3-4 people.

How to Cook St. Louis Ribs – the Shortcut

Typically ribs should be cooked for 3-4 hours, low and slow, but I used a quicker version inspired by Julia Child.

If you want to try a traditional longer method without a sauce try this St. Louis-Style Ribs recipe.

STEP 1: The ribs are salt and peppered, slathered with the whiskey barbecue sauce, then placed in a 375 degree oven for 20 minutes on each side.

STEP 2: After another coating of the sauce, the ribs are finished on a medium temperature grill (350 degrees), charcoal or gas, for about 15 minutes.

Using the Broiler Instead of the Grill

Another way to finish the ribs after they cook in the oven is under the broiler. 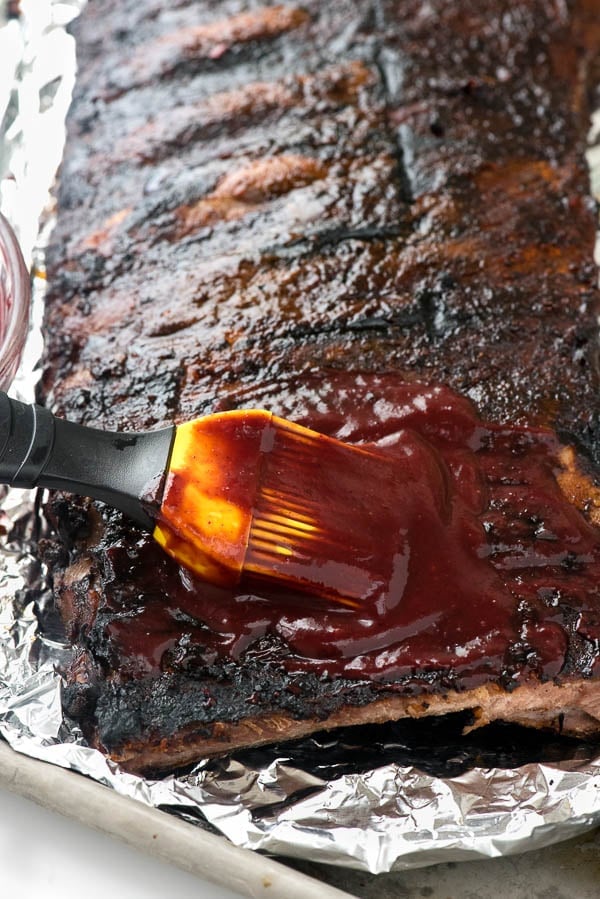 PRO TIPS for Preparing the Ribs

The ribs should be turned frequently once on the grill.

I grill mine with the lid on/closed.

Watch for any flare ups. Keeping a clean food-safe spray bottle of water near the grill for flare ups helps keep any under control.

Make Ahead. The ribs can be basted with the barbecue sauce, covered and refrigerated for up to 24 hours before cooking. This allows the sauce to soak into the meat.

NOTE: since the ribs having cooked first in the oven most of the fat will have rendered already. It’s the dripping fat that causes flare ups when grilling.

Homemade barbecue sauce is fast and easy to make.

Who wouldn’t love a homemade barbecue sauce that’s sweet, spicy, tangy, loaded with antioxidants and some whiskey to boot?

The sauce has the strong tang you’ll love in a BBQ sauce, mixed with the sweetness from the blueberries and some brown sugar, as well as the whiskey.

The whiskey is added to deglaze the pan so the alcohol really burns off leaving its sweet flavor that’s perfect with this sauce.

How to Use the Barbecue Sauce

The barbecue sauce may be used on produce or meats:

Make it a Meal!

Almost anything goes for side dish recipes with this winning main dish combo! Here are some favorite recipes: 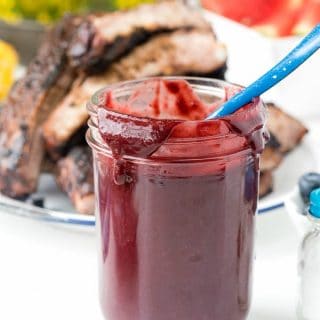 The barbecue sauce recipe was originally developed in partnership with Nielsen-Massey.