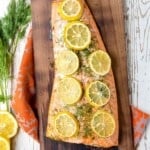 Cedar Plank Salmon is an easy, delicious 30-minute grilling recipe. A special technique of charring the cedar plank adds more flavor and saves time from no pre-soaking of the plank!

This easy cedar plank salmon recipe produces a moist, flavorful salmon fillet thanks to charring a cedar plank before cooking.

No soaking of the plank is required! This cuts down on the prep time by a few hours.

Charring the plank also lends a unique depth of flavor to the salmon.

We also have a secret trick that adds even more flavor while the salmon grills!

This easy salmon recipe turns out perfectly every time.

This recipe is fast, easy with great flavor.

Once the grilling begins the temperature only needs to be monitored a few times. Otherwise there isn’t much attention needed.

Charring the cedar planks is also easy and fast. It allows the planks to singe slightly developing more flavor.

This method of soaking does away with the lengthy plank soaking as well. Removing that turns this into a fast recipe that’s ready in 30 minutes or less!

Salmon Fillet. This recipes uses a large single fillet (1 1/4 pounds) which is cut into four pieces after grilling. This same method can be used for individual fillets too but the cooking time will be shorter.

Pinot Grigio wine (optional). I use this in a spray bottle to spritz the salmon and the plank during grilling. It adds flavor and encourages steaming of the plank leaving the salmon full of flavor and moist.

My favorite take-aways were shortcuts to make grilling easier and more fool proof.

This recipe for salmon recipe is a perfect example! Don’t put cedar planks in water.

Most recipes will instruct to soak the cedar plank for 2 hours.

We instead char the plank instead, giving it far more flavor.

I no longer soak my bamboo skewers or planks.

How to Char Cedar Planks

Do not turn the grill up, add the plank and leave it. Monitoring during the charring process is key.

Charring the cedar plank is a fast process. It will take about 2-3 minutes per side.

Buying multiple cedar planks in a package is helpful when getting started!

Charring a cedar plank over a gas grill or charcoal:

The smell of the plank is fantastic as it becomes singed!

There are two ways to char cedar planks for this cedar plank salmon recipe.

As described above: char the plank on both sides and allow it to cool before cooking on it.

I cooked the salmon through the indirect method, which is when the heat is not direct underneath the plank.

This method allows it to smoke during cooking and avoiding further flare ups from heat below it.

Cedar Planks Can Be Reused!

Charred planks may be washed off (water only) and reused unless they become badly charred.

This is also true of normal cedar planks that have been soaked.

Lightly scrub any remaining fish skin off and rechar them when next using them.

Where to Buy Cedar Planks for Grilling

Cedar planks can be purchased where grills and grilling supplies are sold or at most grocery stores. They are also available online.

How Long to Grill Salmon

When cooking salmon on a charred cedar plank using the indirect method of grilling, it takes aproximately 30 minutes to grill.

Using a thermometer is key to determine when protein is done on the grill.

Salmon Continues to Cook Off the Grill

Take the salmon off the grill at about 135 degrees. Allow it to rest during which time the temperature should rise an additional 5 degrees.

What is the doneness temperature of salmon?

The salmon is done when it registers 145 degrees F.

What thermometer to use?

There are multiple styles of thermometers that work well for grilling.

The criteria should be fast, accurate temperature readings in a grilling situation. Instant read food thermometers are our recommendation.

Probe style. I like the larger montior to quickly read the temperature so the grill lid doesn’t stay open too long.)

Base with a tether and probe. The bases are often magnetic so they can stick on the side of the grill. A long tether attaches the base to the probe. The probe is inserted into the meat (or salmon in this case).

This allows monitoring of the temperature without having to be close to the meat or fish cooking.

Have a food-safe spray bottle on hand!

I have a small BPA-free food-safe spray bottle used for water or wine spritzing on the grill.

Spritz the salmon and the plank during grilling with pinot grigio wine. Spritzing the cedar plank causes some steam, fully releasing the flavor of the cedar into the salmon.

If using water, just use it to spray the plank to encourage steam. Don’t spray the salmon with water.

How to Make Cedar Plank Salmon – Step by Step:

For a detailed printable recipe, refer to the recipe card at the end of the blog post.

Use one of the two methods described above to char the plank.

Preheat the grill to 300 degrees (gas) or medium fire (charcoal).

Set the grill up for INDIRECT METHOD grilling.

Place the salmon skin side down on the prepared cedar plank. Add the lemon slices and dill on top.

Place the cedar plank onto the grill grates over indirect heat (the unheated section of the grill, not over the flames). Spray with the wine and close the lid.

Remove from grill and allow to rest for 5 minutes.

Cut into four portions and serve.

Side Dish Recipes to Serve with this grilled salmon

What is the ‘indirect method’ of grilling?

This is cooking with the heat (flames) NOT directly underneath the items being grilled. Usually the grill is heated then only side burners are left on (gas grill) or charcoal is partitioned to the side. The food is cooked on an area without flames.

Can salmon skin be eaten?

Yes! It’s really a matter of personal choice. The skin has many nutrients in it. 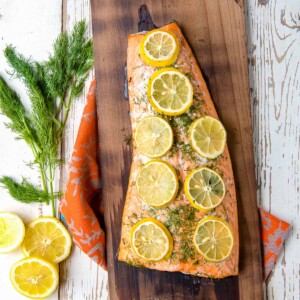 How to char the cedar plank Use one of the following methods to prepare the plank for grilling the salmon. Closely monitor the process so the plank does not burn. Method 1 Char the plank on both sides (about 2 minutes a side) and allow it to cool before cooking on it. Method 2