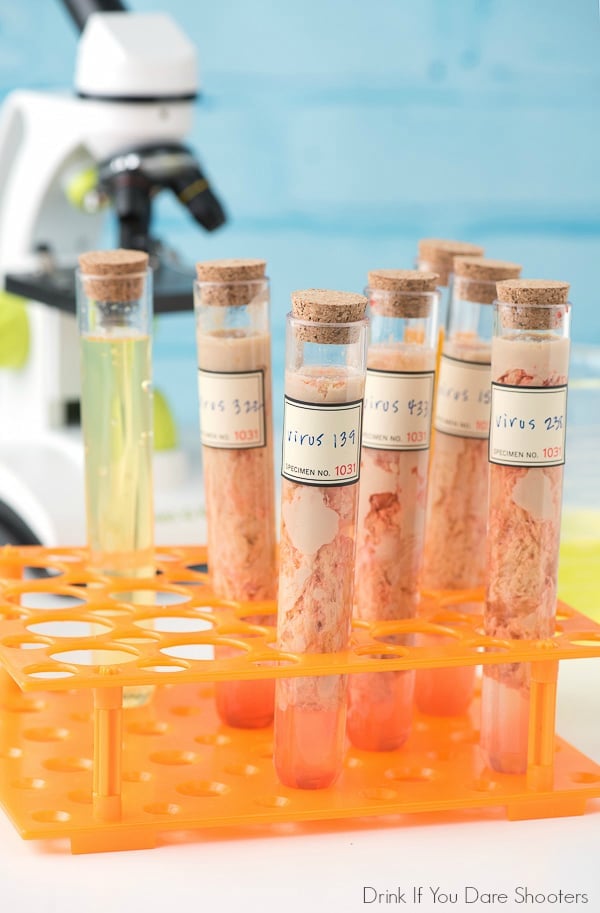 I’m feeling a bit sheepish. And honestly a bit guilty. When I look back over my posts from the last few week it looks like nothing but a Halloween party. No real sustenance or meals to serve at the dinner tables. Mutilated Zombie Cupcakes, Infected Brain Cocktails that glow in the dark, Jack-o-Lantern Fruit Dessert Pizza, Screaming Witch Crudities. Well I guess there were some Vietnamese Spring Rolls (with a how to roll them tutorial) and Taco Pasta with Black Bean noodles thrown in, so I feel a bit better! Fall isn’t fall without caramel apples too. 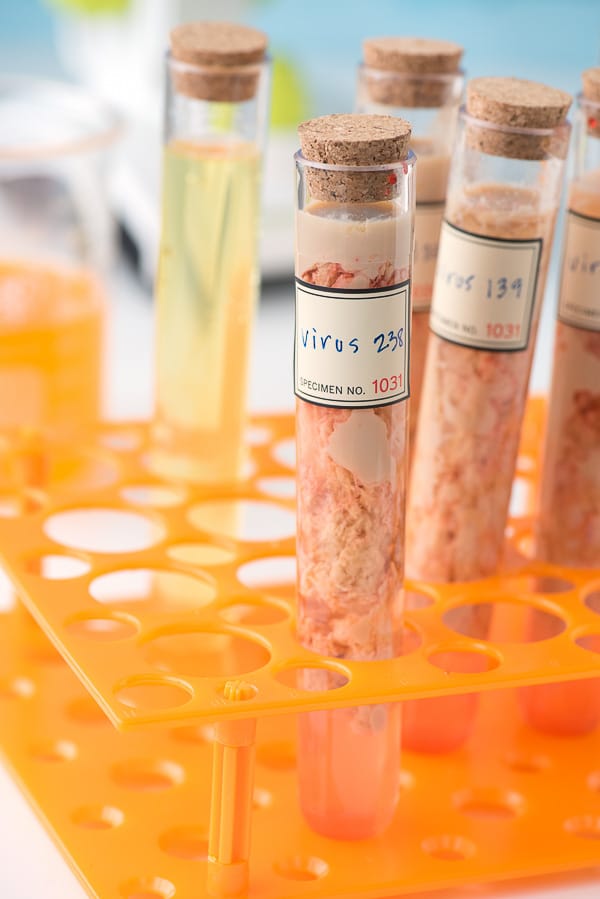 I have one more creepy Halloween recipe to share. Will you indulge me? Being a chemistry fan, since I ran across the Brain Hemorrhage shot a few years ago I’ve been dying to reinvent it for a spooky party. The look is a cross between a lava lamp and something you might find in a forensic science laboratory which made me love it all the more. When I’d finished making the Drink If You Dare Shooters in their test tubes and showed my non-squeamish husband, his face began to contort when looking at it which was my A+ on this assignment. Getting him to drink one was another challenge, but after he did and shuddered from disgust, he agreed it tasted good. Bingo! 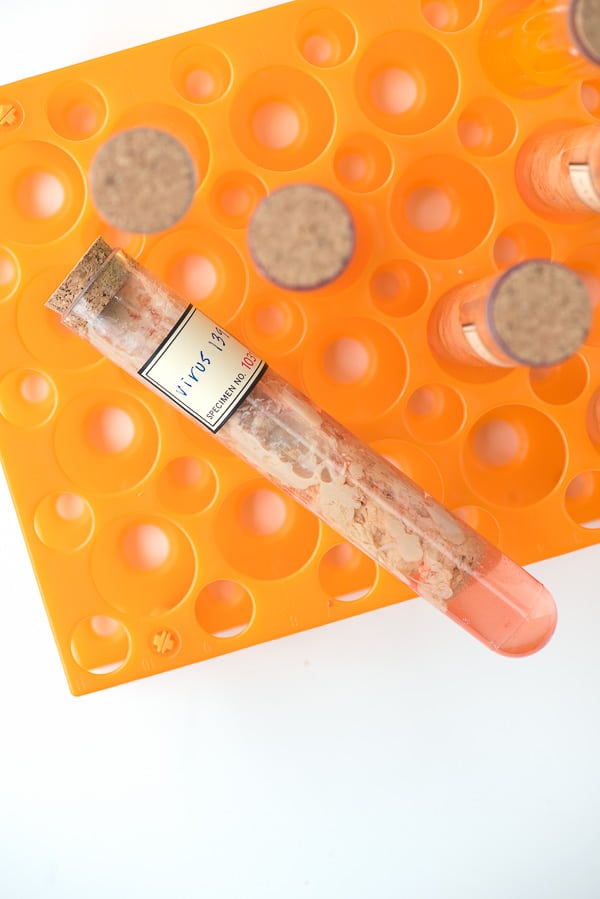 The cocktail shooter actually tastes far better than it looks like it would. Not much of a challenge there, I realize. A combination of peach schnapps and Bailey’s Irish Cream comprise the majority of the drink, which I also realize sounds utterly repulsive. It’s not, honest. It’s a pleasant tasting sweet-but-not-overly sweet libation and unlike other shots, usually taken on a dare, doesn’t go down like it’s putting hair on your chest (gals) or exfoliating your throat. It’s really good. 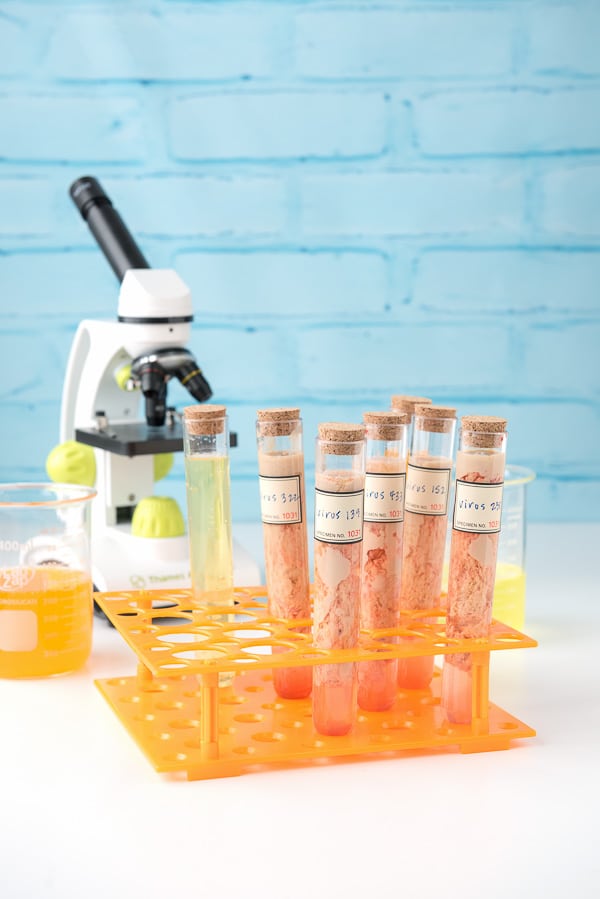 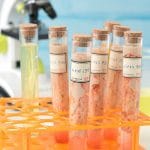 Drink If You Dare Shooters 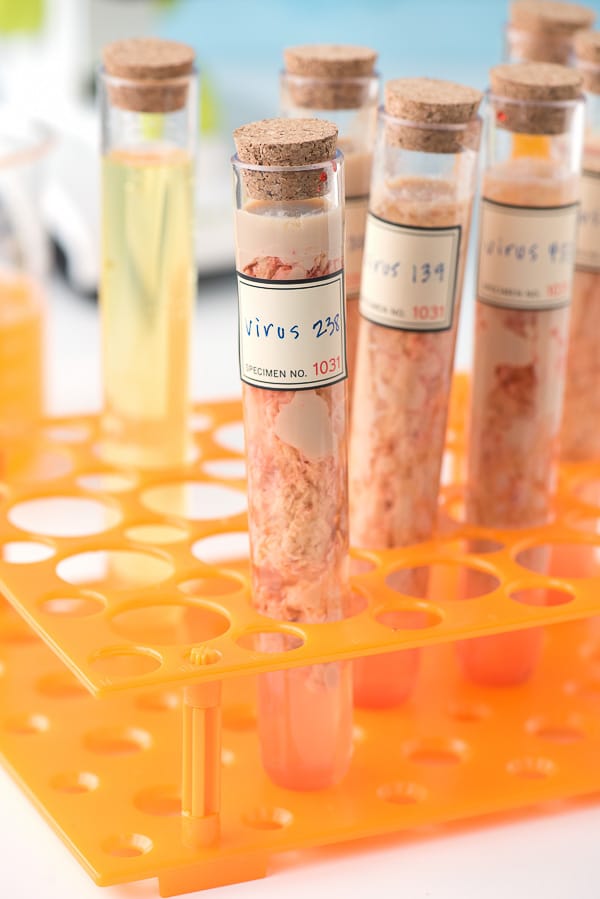