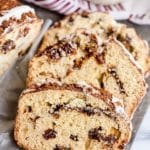 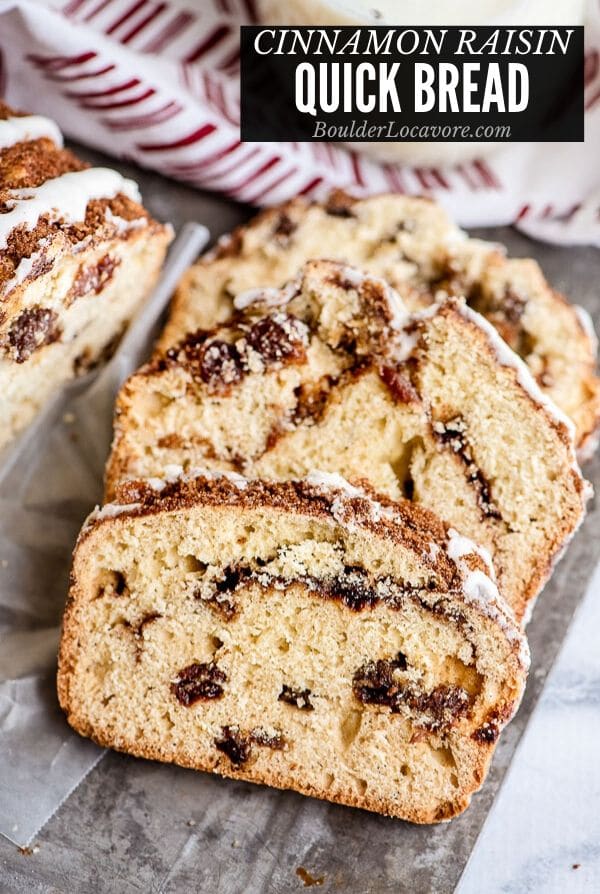 This soft homemade bread recipe is full of comforting flavors of melted butter with a cinnamon swirl.

It’s fast and easy to make. A great option to toast for breakfast or snack on during the day.

The ingredients are simple and probably in your pantry right now!

What is Quick Bread?

Quick bread is a type of homemade bread that can be made ‘quickly’ without yeast for rising.

Typically yeast bread recipes require one to two rising cycles for the yeast to do its job.

These bread recipes take a few hours minimum to prepare and bake.

Quick breads on the other hand are fast to put together and go directly into the oven.

They are easy for all skill levels to make.

This bread recipe is no exception. 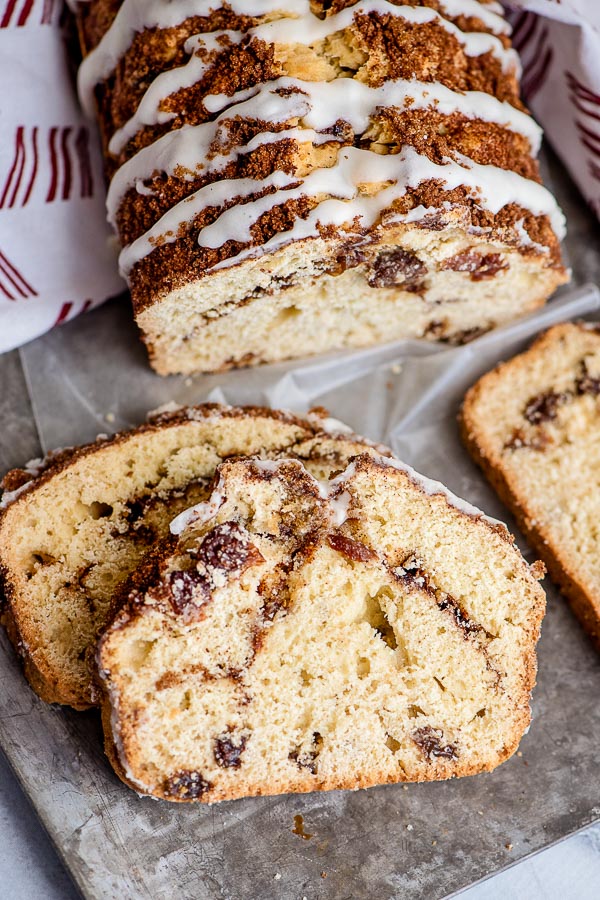 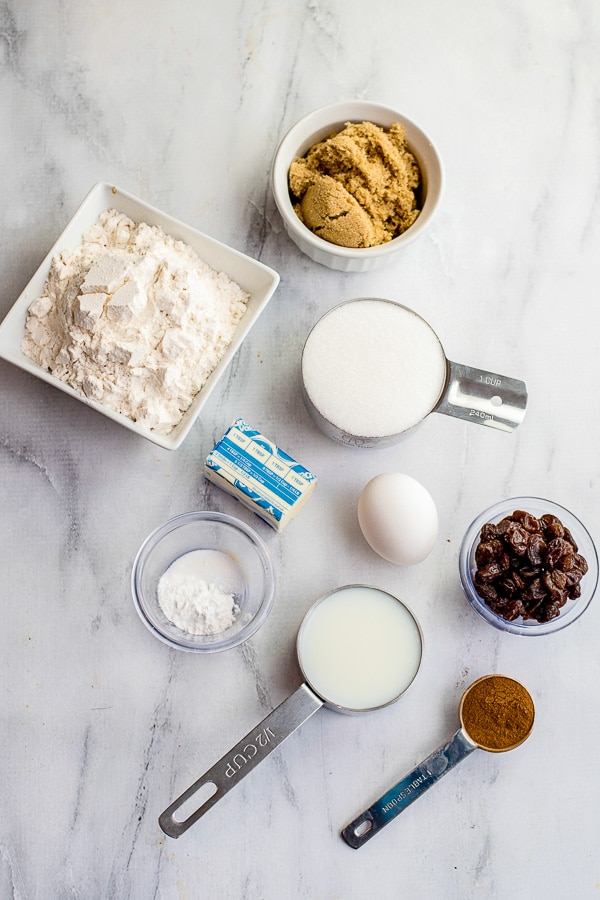 This recipe has been tested with regular All-Purpose Flour and gluten-free flour. Both provide great results.

Flour measuring PRO TIP: Do not pack the flour simply spoon the flour into a measuring cup and level off.

Do this to prevent too much flour from being used.

Add 1/3 cup of chopped walnuts or pecans for extra flavor and texture. 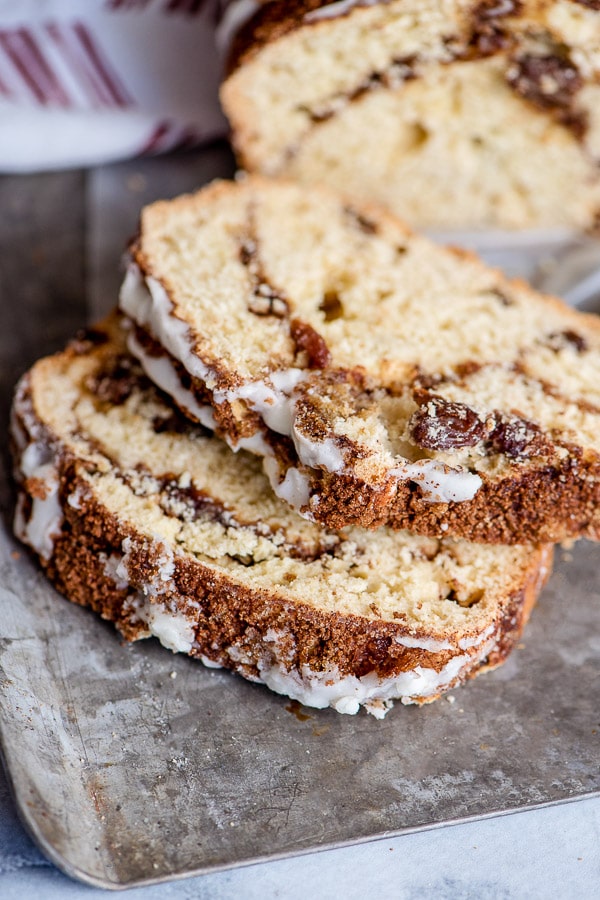 STEP 1: Preheat the oven to 350 degrees F. Prepare a 9-inch by 5-inch loaf pan by spraying with non-stick cooking spray.

PRO TIP: for easier removal line the bottom with parchment paper letting some over hang the sides of the pan.

STEP 2: Combine the brown sugar and cinnamon in a small bowl (photos 1-2). 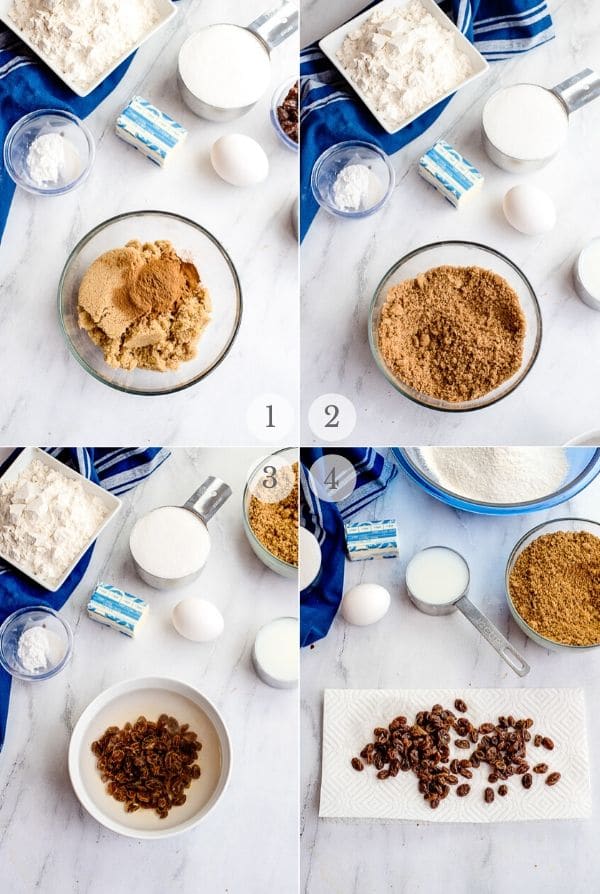 STEP 3: Combine the raisins and vanilla extract in a small bowl. Fill with boiling water leaving 1/2-inch of water over the top of the raisins (photo 3). Soak 15 minutes. Drain and put raisins on a paper towel (photo 4).

STEP 4: Place plumped raisins in a bowl with a spoonful of the brown sugar-cinnamon mixture (photo 5). Stir to combine (photo 6). 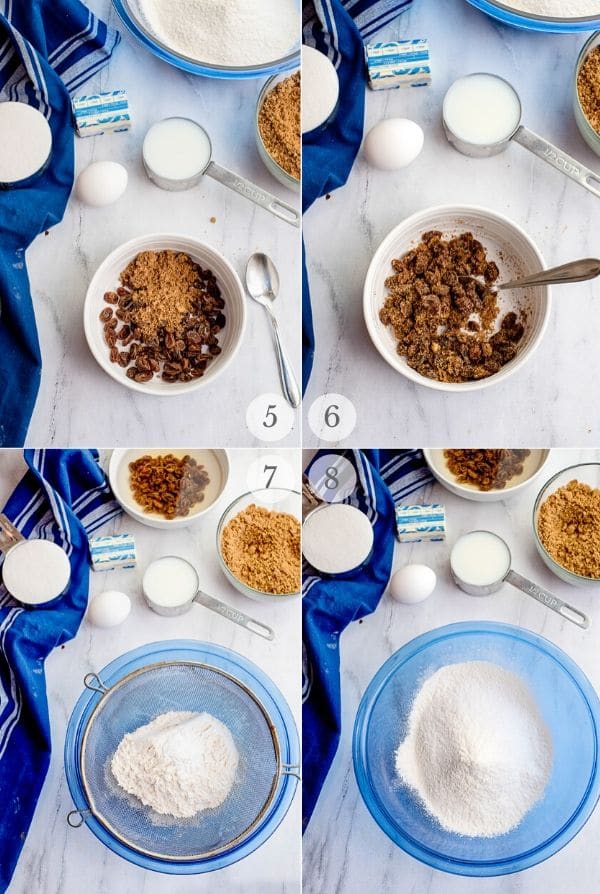 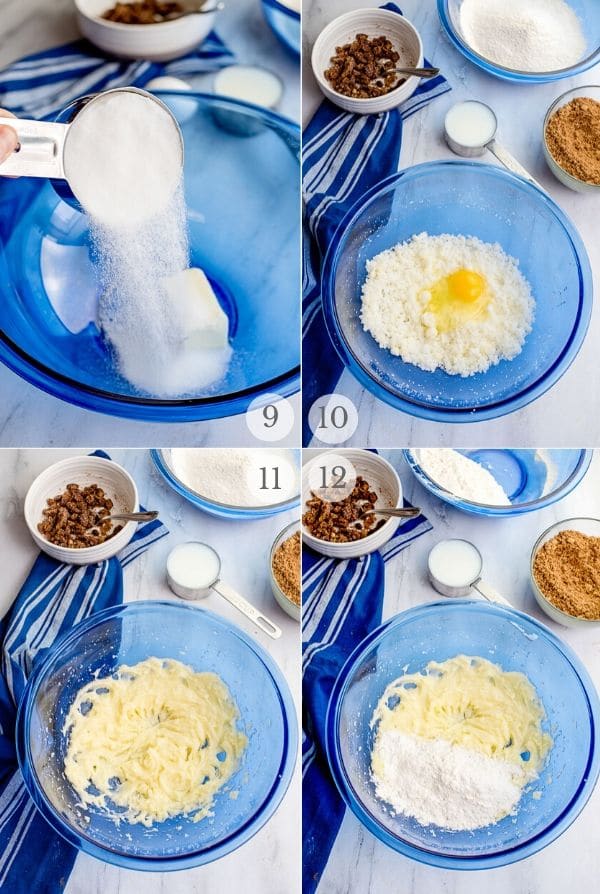 STEP 7: Slowly add the flour mixture alternating with the milk (photos 12-13). Mix just until combined (do not overmix). 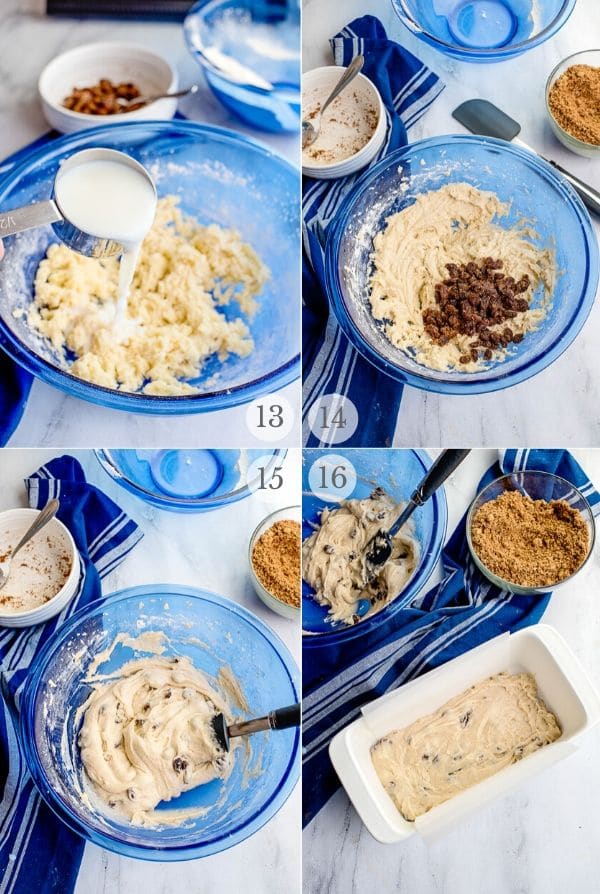 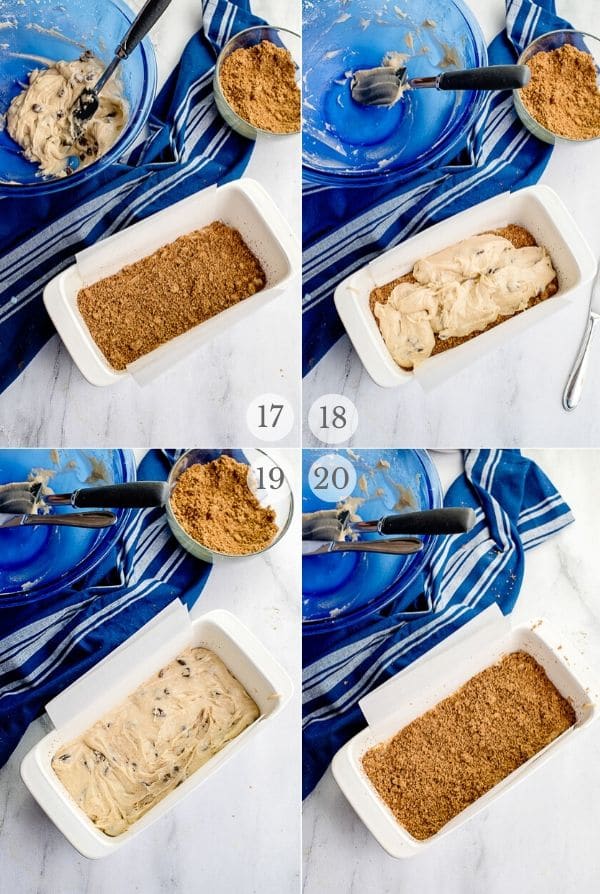 STEP 9: Bake for 60 minutes or until a toothpick inserted comes out clean. The top will be golden brown.

PRO TIP: Bake immediately after combining the ingredients! Do not let the batter sit.

STEP 10: Allow the baked homemade bread cool in the pan for 10 minutes. Remove from pan and let cool 1 hour on a wire rack before glazing. 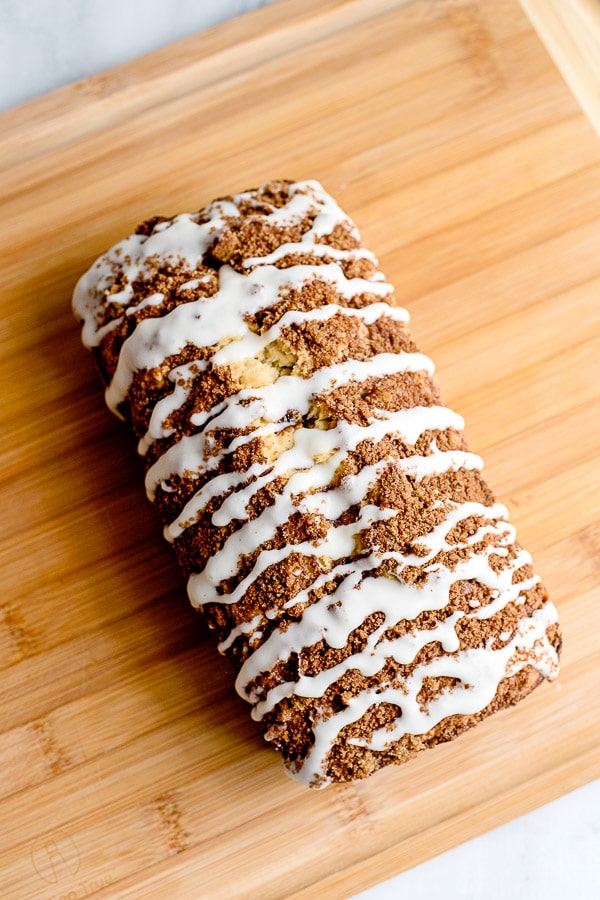 This allows even glazing. Excess glaze will drip into the pan below so the bread does not get soggy sitting in it.

PRO TIP: start drizzling the glaze just next to the bread to create an even glaze.

After the glaze hardens, remove the baking sheet, and discard the foil. 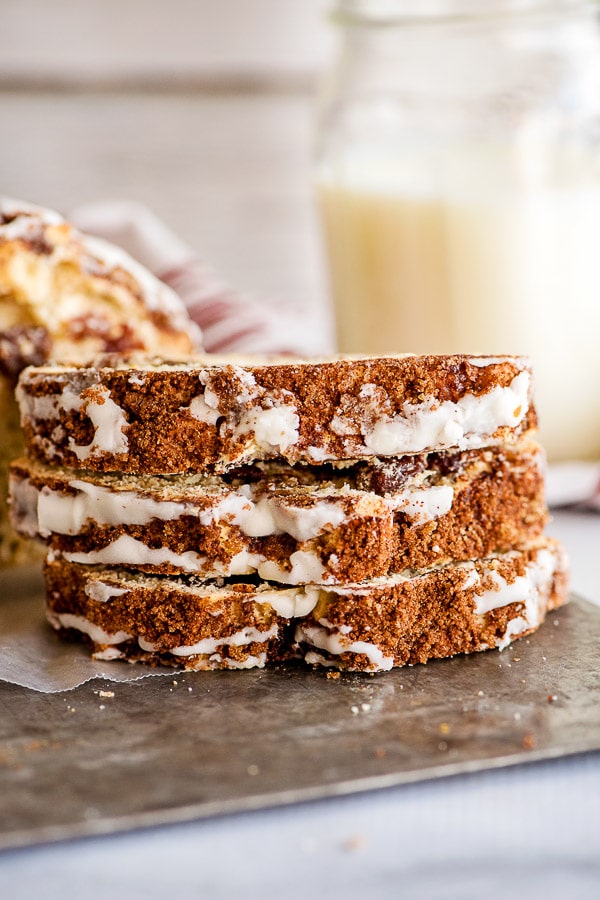 Wrap tightly in plastic wrap and store at room temperature for up to 3 days.

Wrap the fully cooled homemade bread tightly in plastic wrap. Place in a freezer bag or wrap with foil.

Freeze for up to 3 months. Thaw in the refrigerator. 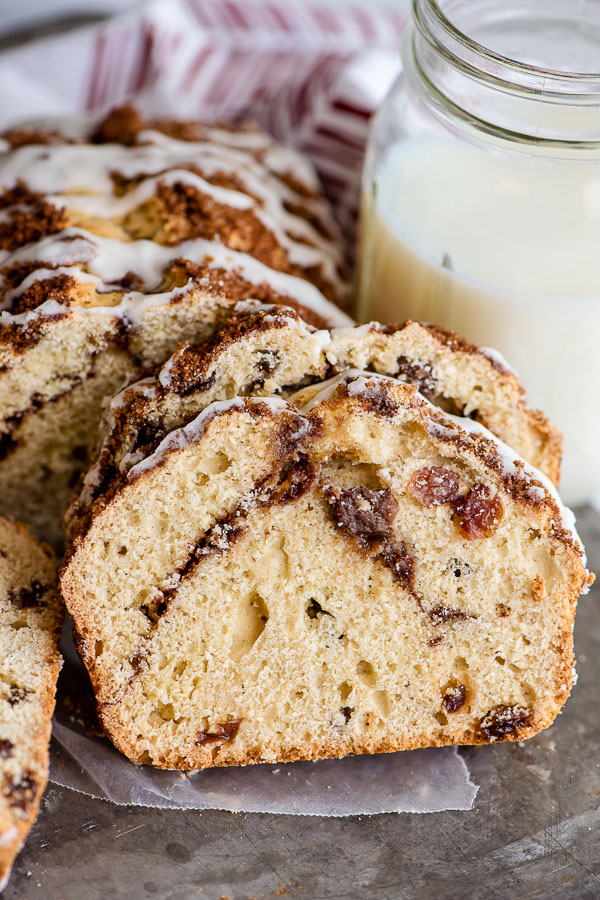 Try these Muffin Recipes too! 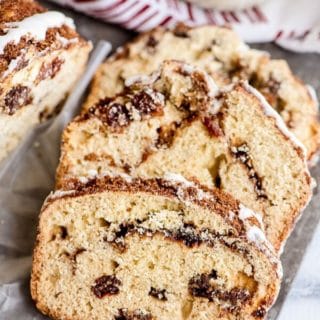 Do not pack the flour simply spoon the flour into a measuring cup and level off. Do this to prevent too much flour from being used. Raisins: 1/3 cup equals 3 tiny boxes of raisins.

Make sure you bake immediately after combining the wet and dry ingredients, do not let the batter sit. Glazing the Bread