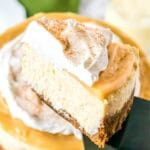 Creamy Eggnog Cheesecake with a Pecan Gingersnap crust is so easy in the Instant Pot! Winter flavors of eggnog, cinnamon, nutmeg and ginger are a delicious dessert combination. 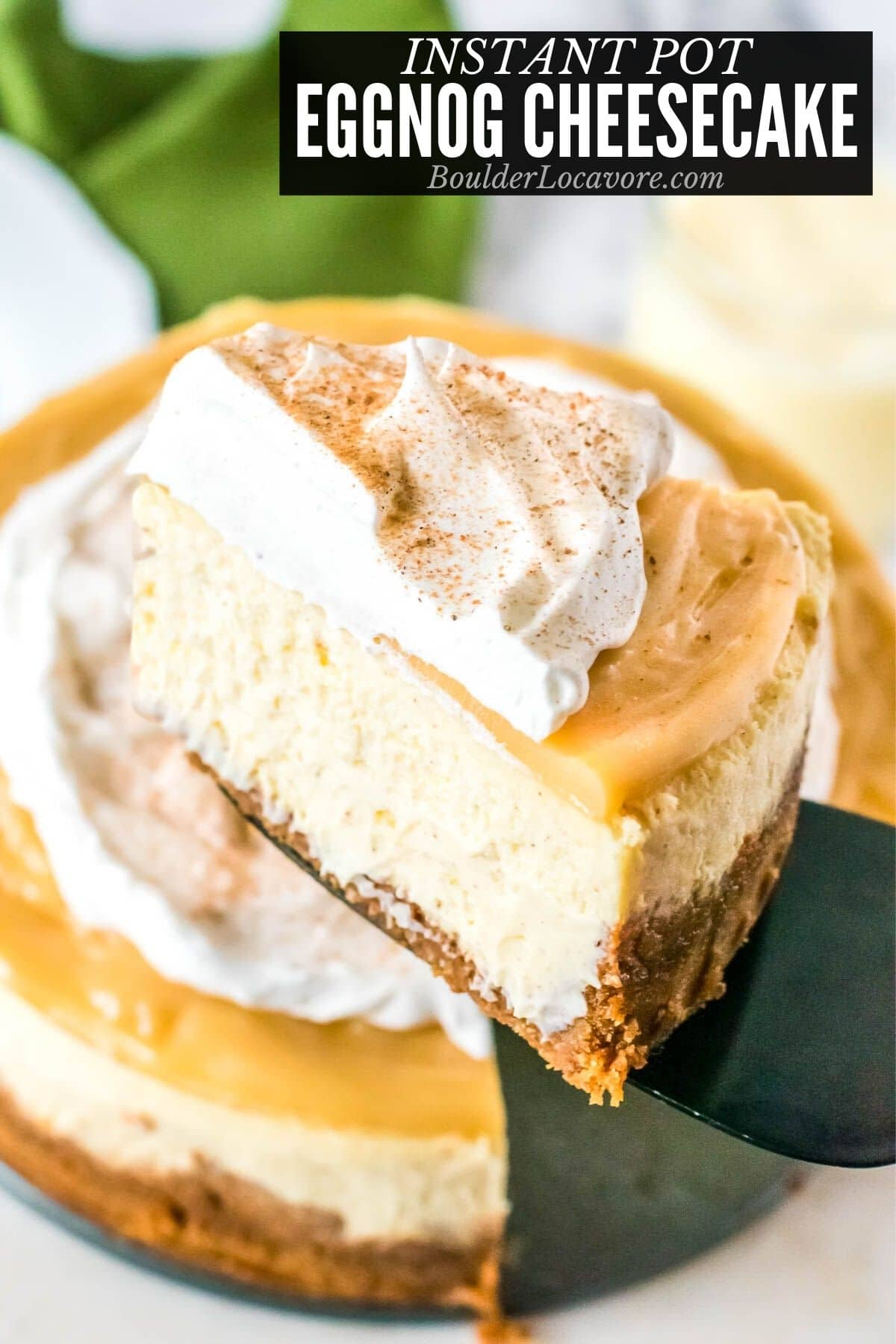 If you are an eggnog lover, this Instant Pot Eggnog Cheesecake will be a favorite!

Creamy eggnog flavor tastes like winter and the holiday season.

These flavors make a perfect combination! Creamy eggnog cheesecake filling with a hint of cinnamon and nutmeg spice.

Making cheesecake in the Instant Pot is easy and creates a wonderful texture.

It’s faster and easier than cooking cheesecake in the oven (in my opinion).

There isn’t the same concerns about the filling cracking since it is enclosed in a moist environment all through cooking.

The fussy steps of cracking the oven door after cooking doesn’t come into play either.

Here are some of our other favorites:

Lime Cheesecake in the Instant Pot 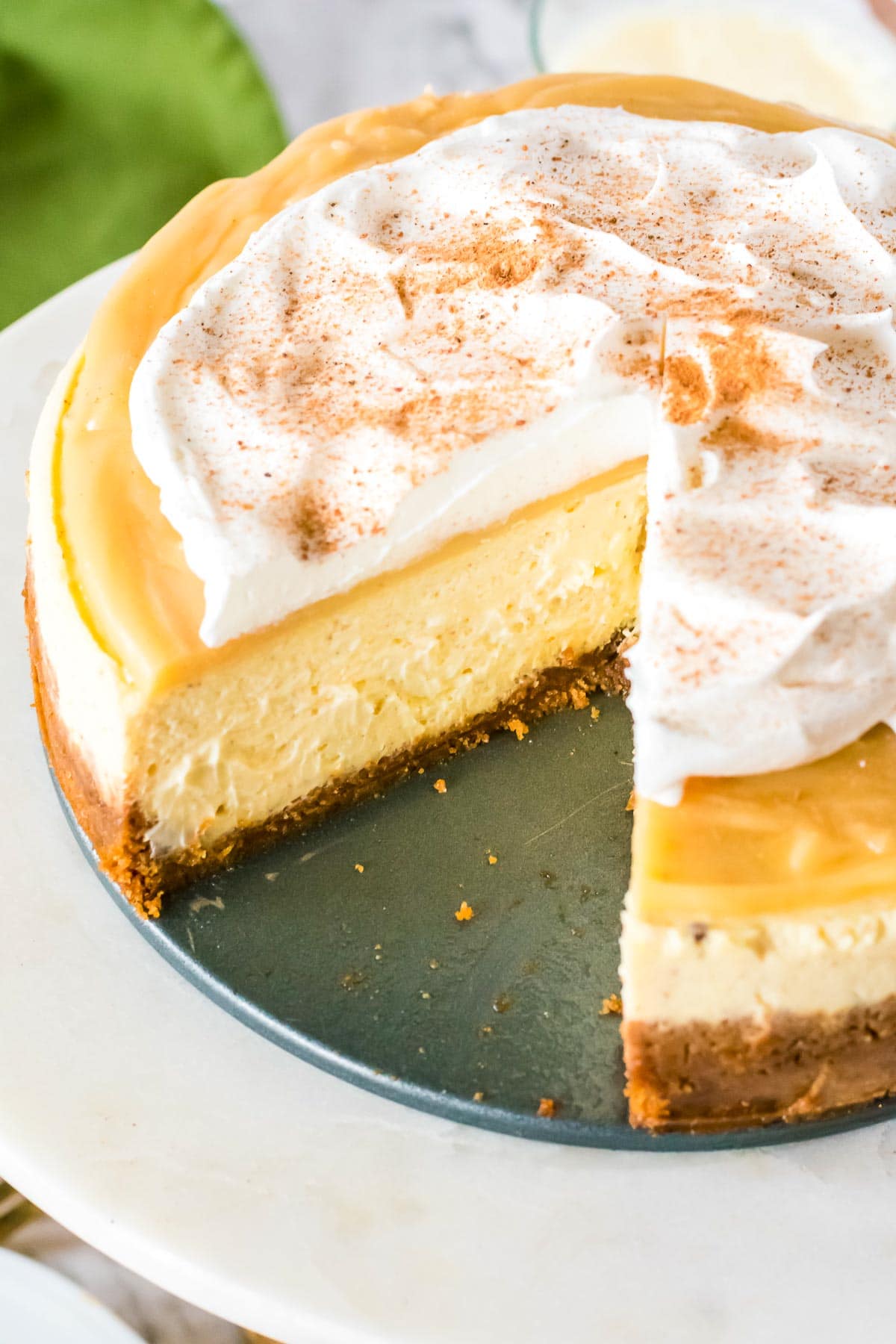 Pecans. Pecans are dry roasted on the stove top then ground into the cheesecake crust along with the ginger snap cookies!

Salt. A pinch of salt! We use kosher salt for better taste.

Cinnamon. Used in both the crust and the cheesecake filling.

Butter. Use unsalted butter. It’s melted to hold the crust ingredients together.

Cream Cheese. The star of the filling. 2 8-ounce packages are used. We use whole fat cream cheese. Start with softened or room temperature cream cheese for best results.

Eggnog. Homemade eggnog or store bought can be used. It gives the filling a holiday flavor!

Sour Cream. Adds a creamy texture and some tanginess to the filling.

Nutmeg. The classic spice to use with eggnog.

Eggs. Holds the filling together.

OPTIONAL: if not using the Butter Rum Toffee sauce, you can add some rum extract to the filling to taste like eggnog without the actual rum!

We added my grandmother’s Butter Rum Toffee sauce to the top of the cheesecake. It gives a buttery rum flavor perfect with eggnog.

Whipped cream and a dash of nutmeg finish it off.

In a medium dry skillet toast the pecans over medium-high heat (stirring often) until fragrant; 3-4 minutes. Remove from heat and set aside.

In a food processor or mini chopper combine the gingersnaps cookies and pecans (photo 1). Grind into fine crumbs.

Press the crumbs into the bottom of the pan extending 1/3 up the sides of the pan to form a crust (photo 4).

Place in the freezer while making the filling.

Place the softened cream cheese in the bowl of a standing mixer. Beat with the paddle attachment for 5-6 minutes, scraping periodically (photo 5).

Scrape the bottom and sides of the mixing bowl. Add the sugar and vanilla. Beat on medium speed to combine.

Scrape the bowl again and add the sour cream and eggnog (photo 6). Beat on LOW speed to combine.

Add the cinnamon and nutmeg. Beat to incorporate (photo 7).

Add the eggs, one at a time. Beat on low speed to mix in.

Scrape the bowl after both eggs are added and mix another minute to fully combine. NOTE: DO NOT OVERMIX.

Remove the crust from the freezer. Spoon the filling into the crust (photo 8) and tap the pan on the countertop a few times to release any trapped air (photo 9).

Cover the top of the pan with aluminum foil and seal well (photo 10).

Secure the lid and put the vent in the sealing position. Cook on HIGH PRESSURE for 40 minutes. Follow with a NATURAL RELEASE.

HIGHLY RECOMMENDED: make a sling of foil by taking a 20-inch length of foil and folding it in thirds lengthwise.

Place the cheesecake in the center of the sling and lower into the Instant Pot. The sides of the sling will extend higher than the edges of the springform pan (refer to photo 12).

It makes it much easier than trying to grab the pan and lift it out.

After cooking, remove the cheesecake and place on a cooling rack until it reaches room temperature.

Move to the refrigerator to chill at least 4 hours or overnight. It will continue to thicken and develop a creamy texture.

Remove the sides of the pan to slice and serve the cheesecake.

Add any of the suggested toppings or serve as is!

What should the Instant Pot Cheesecake look like after cooking?

The cheesecake looks uncooked. Yes, as soon as you take it out it will look uncooked.

The cheesecake should jiggle in the center but should be firm on the outside.

It will set completely in the refrigerator.

Also take the extra time at the beginning to mix the cream cheese well to avoid getting a lumpy cheesecake.

Use a Springform pan. This allows the sides to be removed when the cheesecake is chilled for easy slicing.

You can use a 6” OR 7” springform pan for this recipe. The cheesecake will be a little thicker if using the 6” pan.

This is my favorite springform pan for making Instant Pot cheesecake.

Scrape the mixing bowl between ingredient additions. Make sure to scrape the bowl in between every addition of ingredients.

This will help make sure everything is evenly distributed and avoid lumps in the cheesecake.

Do not overmix the eggs. This is an important step to get the desired texture of the Instant Pot cheesecake.

Just mix enough to incorporate the eggs and stop.

What if there is condensation on top of the cheesecake after cooking?

That is OKAY! Just take a clean paper towel and dab the access water off.

Why do you freeze the crust?

This keeps the crust from getting a soggy. Freezing it helps keep the crust firm through the pressure-cooking process. 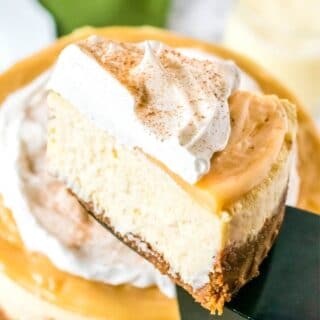 CREATING A FOIL SLING (optional but recommended):  Using a sling makes it easier to lower the cheesecake into the Instant Pot and remove it after cooking completes.