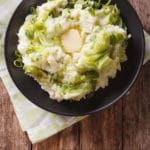 Colcannon is a traditional Irish mashed potato recipe with kale and scallions. It’s irresistibly delicious and perfect for St. Patrick’s Day too. 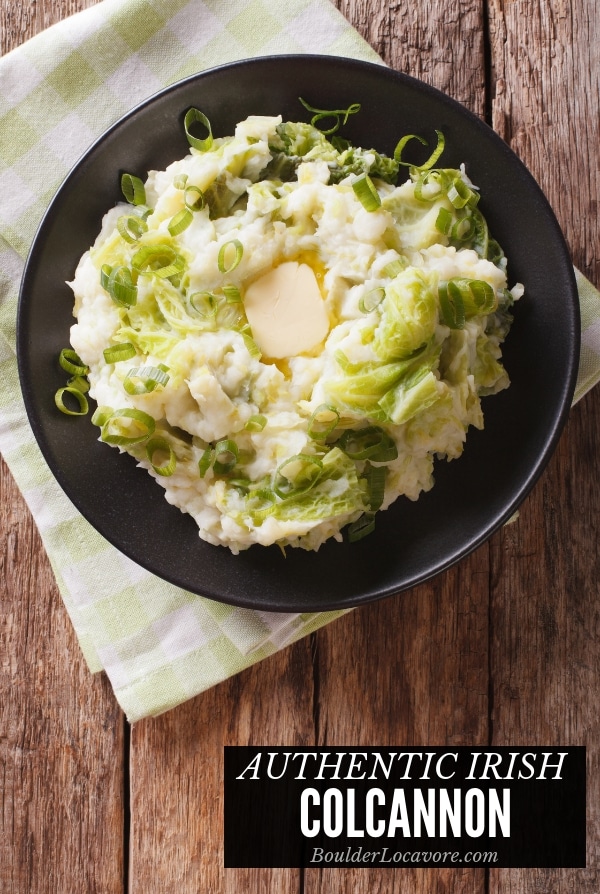 Try it once and you’ll be hooked!

With only five ingredients this dish is easy to whip up and a great authentic Irish dish.

Colcannon is a traditional Irish recipe of mashed potatoes with kale or cabbage, scallions and butter.

Some recipes include milk or cream; some do not (this does not).

It also can contain other ingredients in the onion family such as leeks or chives.

Like many traditional recipes, there are family or regional variations, such as including boiled ham or bacon.

It’s a hearty, affordable recipe that is particularly satisfying in the cold weather months. 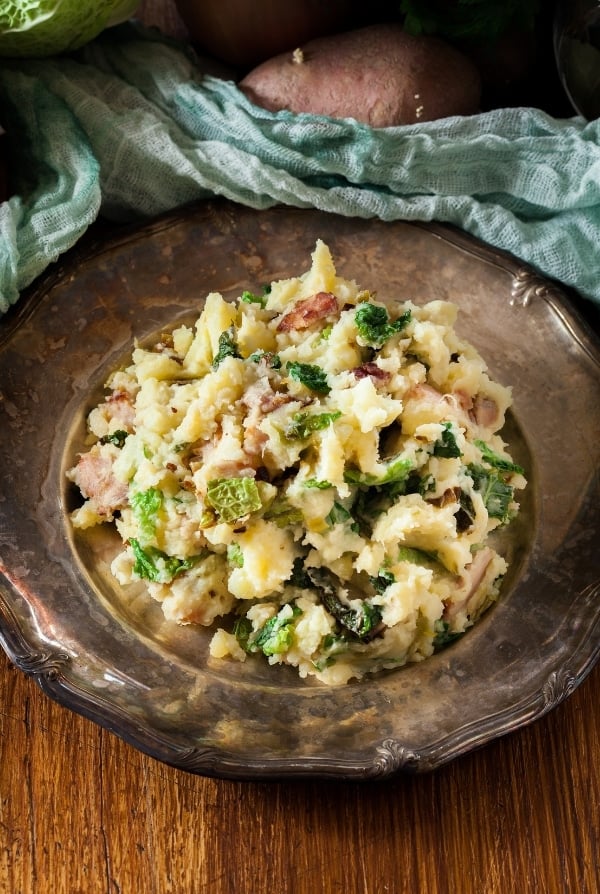 Colcannon recipes have many variations based on family traditions. The version pictured here includes bacon.

Colcannon is traditionally served in Ireland on Halloween with charms hidden in it!

The charms are simple but with significant meanings foretelling future events!

How to Pronounce ‘Colcannon’? 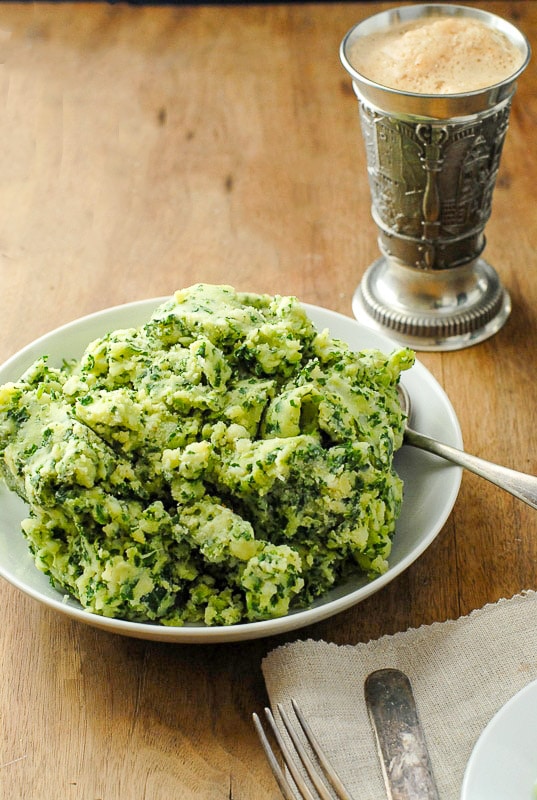 The ingredients are simple. This Colcannon recipe includes: 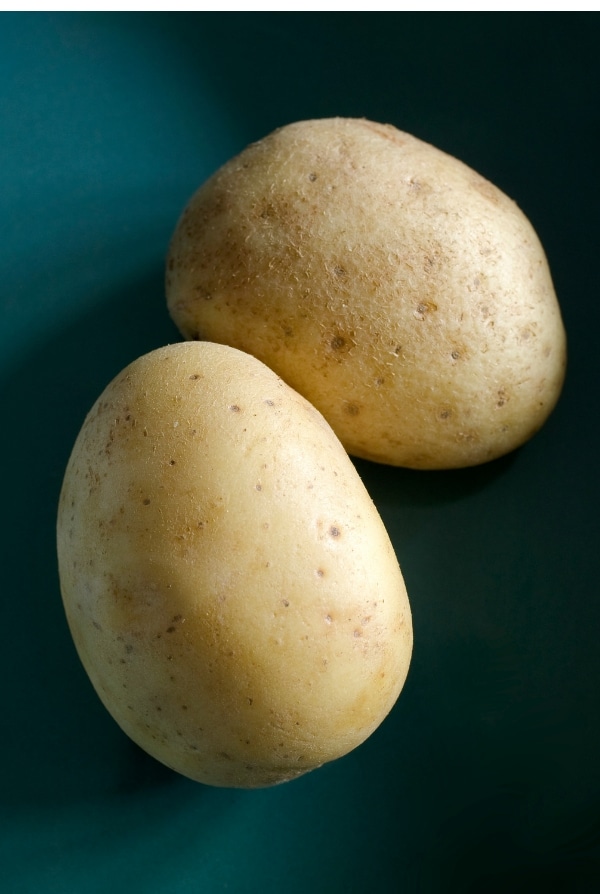 What Type of Potatoes to Use for Colcannon?

In a traditional Irish Colcannon recipe, ‘floury’ potatoes would be used.

The closest in the United States would be a russet potato.

Though Yukon Gold potatoes may not be an indigenous Irish potato variety, their creamy nature makes this traditional Colcannon recipe perfection. 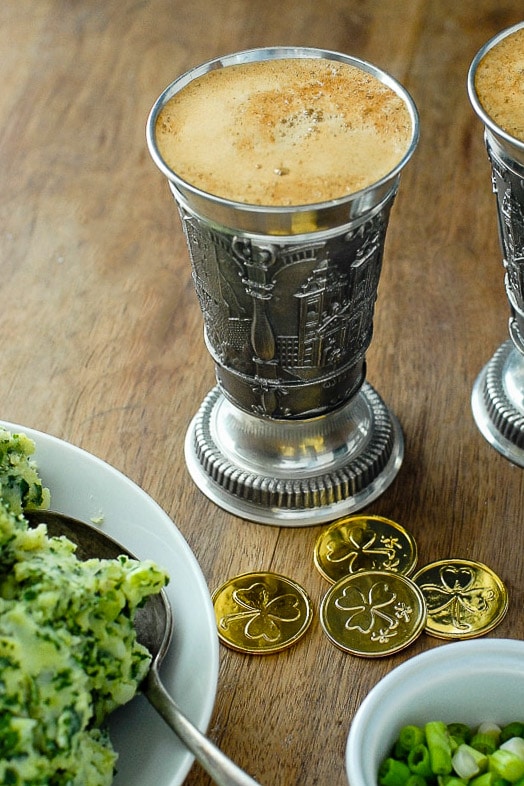 If you have not enjoyed it before you may imagine a strong taste of kale making it seem like more of a “green vegetable” dish.

The curly kale is lightly blanched and processed with the scallions before incorporating into the buttery potatoes.

The heady aroma of the kale and onion when freshly diced coming out of the food processor is truly divine; light, fresh and singing of springtime.

This Colcannon recipe is truly irresistible.

There is a trick that makes removing kale leaves from the kale stem a breeze:

Leaves will peel off the stalk easily and are ready for chopping. 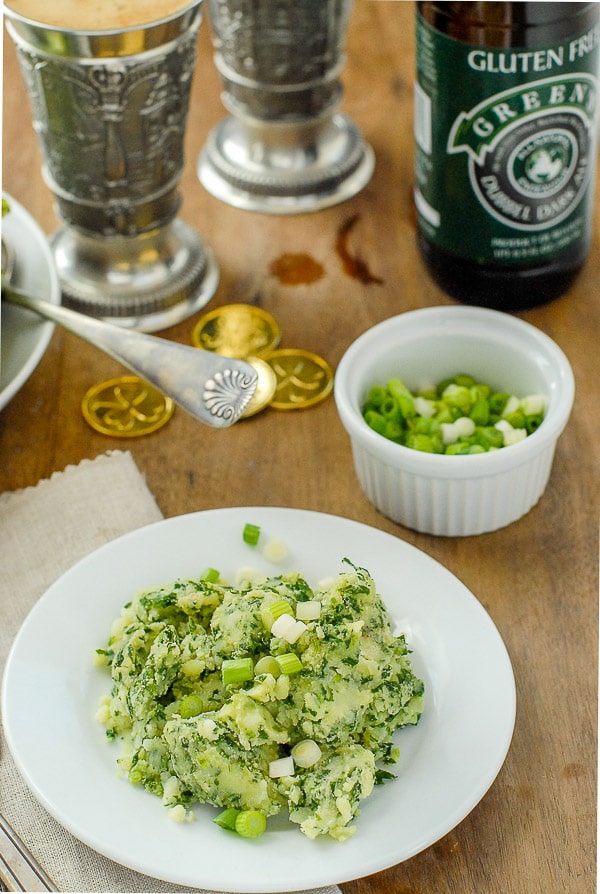 How to Make Colcannon – Step by Step:

Colcannon is very easy to make. There are four basic steps:

STEP 2: Blanching the kale (blanching = quickly adding the kale to boiling water then an ice bath to barely cook it)

STEP 3: Processing the kale and scallions in a food processor

Specific recipe instructions are in the printable recipe card at the bottom of the post.

STEP 1: Fill a large pot with enough water to cover the potatoes by at least an inch (the potatoes should have plenty of room) and bring to a boil.

STEP 3: Place the potatoes into the boiling water until done (about 20 minutes). Drain and return to the pot.

STEP 4: While the potatoes are cooking….bring a second pot of water to a boil (for blanching the kale).

STEP 5: Set up a large mixing bowl of cold water and ice.

STEP 7: Combine the blanched kale and scallions in a food processor. Pulse until the mixture is finely diced.

STEP 8: Add the butter to the potatoes and allow it to melt.

STEP 9: Mash the potatoes and stir in the kale and scallions. 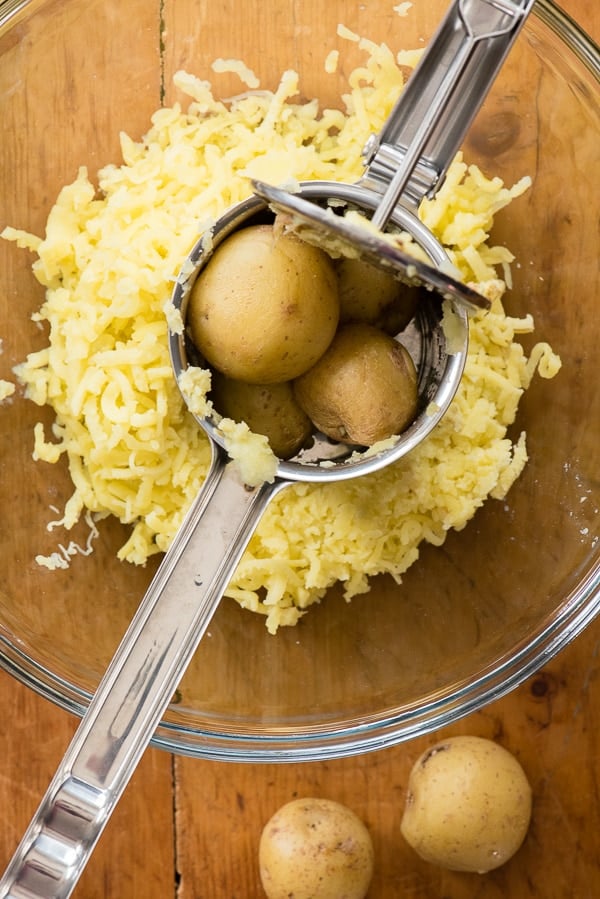 Potato ricers make quick work of mashing potatoes creating a light and creamy texture. This photo is from a different potato recipe but you can see the results when mashing potatoes with the skin on. The skins are filtered inside the ricer leaving just the potatoes.

The Colcannon may be mashed with a traditional potato masher or a potato ricer,which is my preferred method.

If you have not used a potato ricer, it makes quick work of mashing potatoes and gives them a wonderful texture.

Potato Ricers come with a few disks with different sized holes which are fitted into the end of the cylinder.

How Does a Potato Ricer Work?

Add potatoes to the main cavity fitted with disk.

Pull the handles together which depresses a solid metal piece forcing the cooked potatoes through the perforated disk. 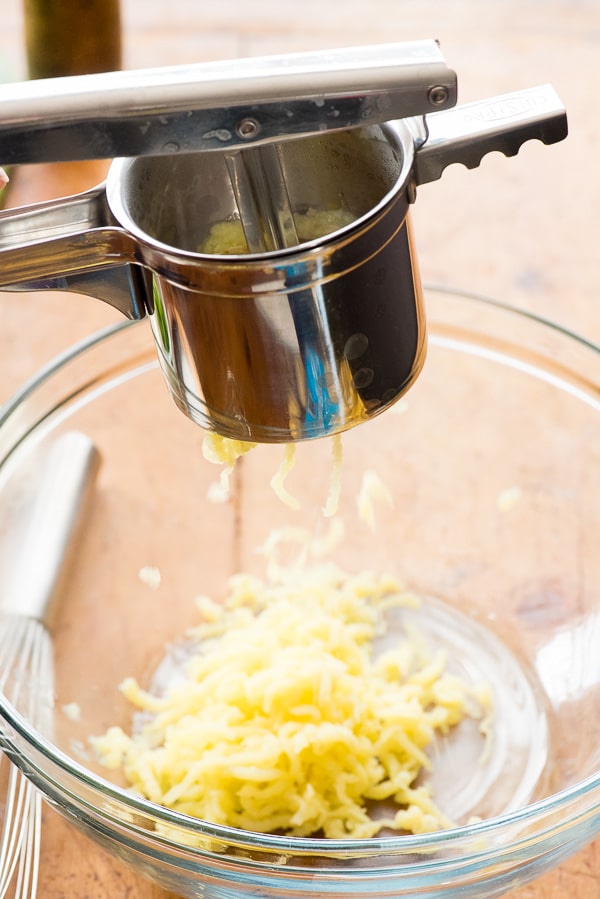 Milk (or cream in some cases) is another variable ingredient in Colcannon.

The type of potatoes used may affect how moist the Colcannon recipe turns out.

If desired to make a lighter, creamier Colcannon, feel free to add a bit of warm milk in the last step. 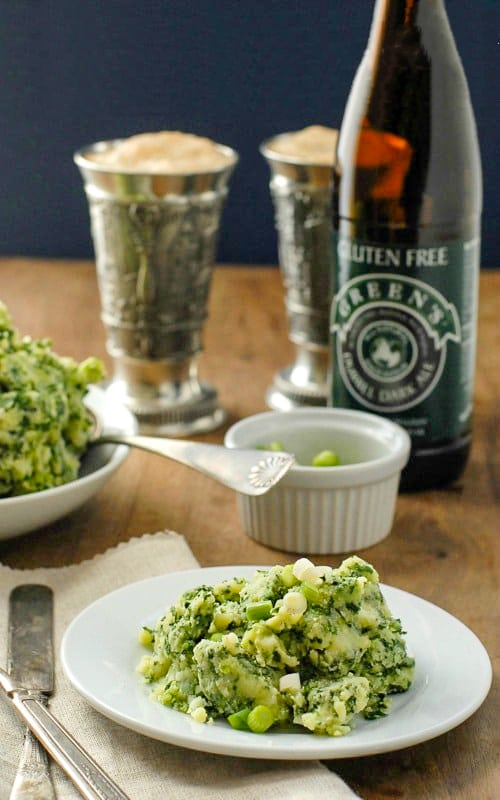 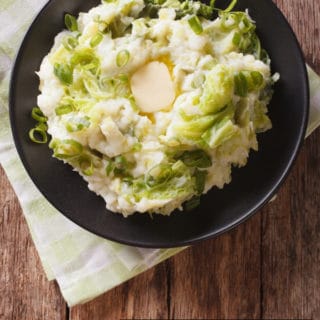