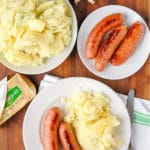 Irish Potatoes are some of the best! Irish Potato Champ is a traditional Irish mashed potato dish that includes scallions giving the recipe a sweet, spring flavor. Perfect for St. Patrick’s Day, and every other day too! 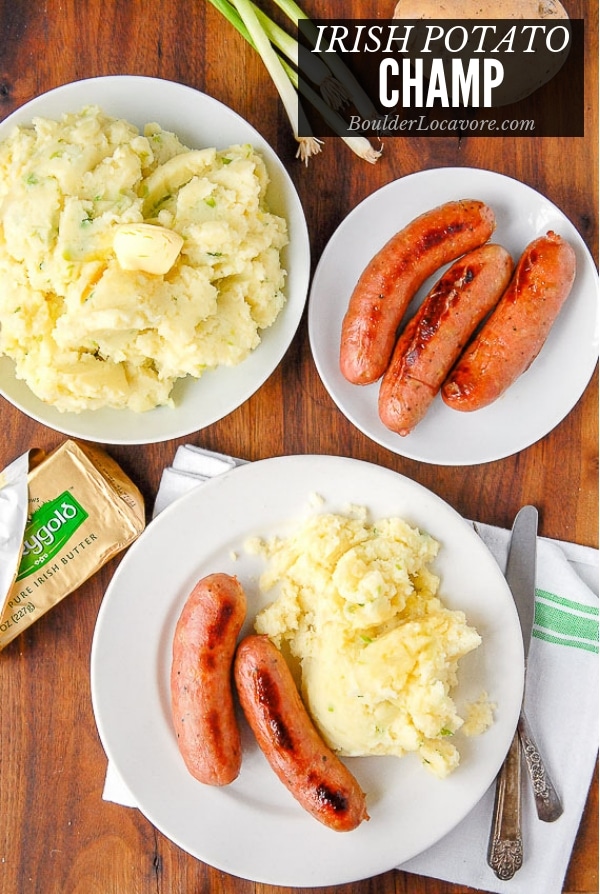 I would have to say what I love most about Irish food is its honesty.

Many of the most well-known dishes consist of a mere handful of ingredients, are rustically prepared and yet deliver the most comforting satisfaction.

Irish Potato Champ is no exception.

Until I began to travel to Ireland I did not realize the wealth of natural food sources at their disposal.

Seafood such as salmon and mussels, meats including mutton, lamb and beef as well as a wealth of produce abound.

I’ve had beautiful meals in Ireland that are only topped by the charming company of the locals. 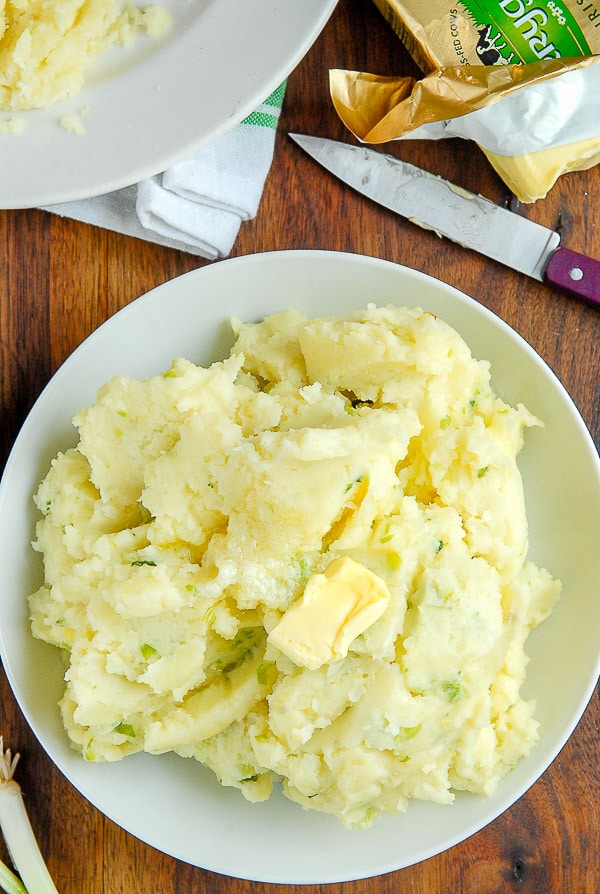 Surely some of my favorites are those involving potatoes. Boxty, Colcannon and Champ are stars in my book.

Boxty is a type of potato pancake.

Colcannon is a mashed potato dish that includes kale and scallions leaving the potatoes green in tint. The flavors are springy without any overbearing flavor of the kale. 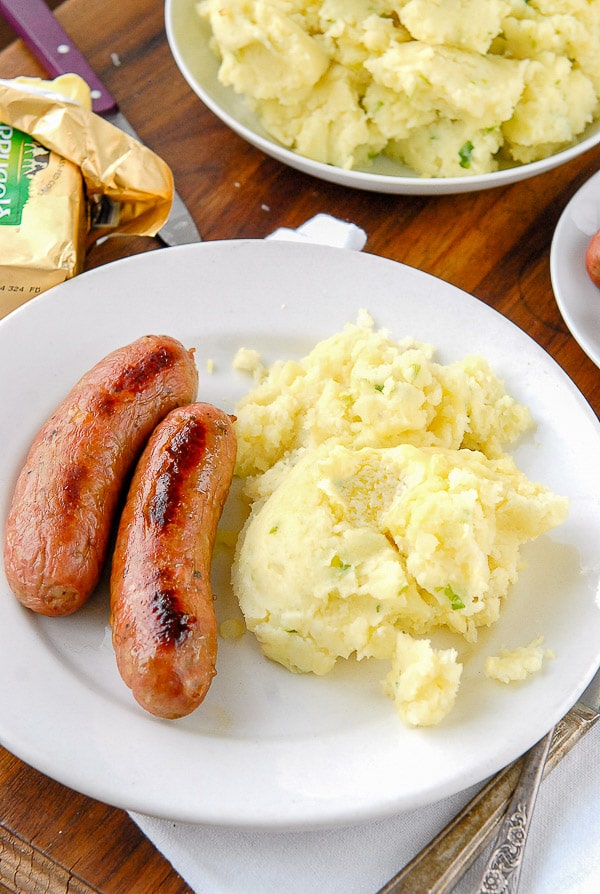 Champ is a kissing cousin of Colcannon. Potatoes steamed and passed through a ricer to keep them light in texture.

These Irish potatoes are combined with scallions simmered in milk and a nice amount of butter (not too much). The flavor is sublime.

They have a slightly sweet flavor from the scallions steeped in the milk that tastes like fresh greens of spring.

Like Colcannon, Champ has long roots in Irish history. These were very inexpensive recipes to make as the ingredients were able to be locally grown even in the worst of soil or colder conditions.

The filling Irish potatoes were a perfect choice during more trying financial times, pair with almost any available protein or may be enjoyed on their own.

In Northern Ireland the scallions are swapped out for peas for an equally delicious version.

Though I’m choosing to share this before St. Patrick’s Day, Irish Potato Champ mash is traditionally served at Halloween.

It often includes a coin wrapped in waxed paper and the lucky diner who finds it in their serving is said to have good luck for the next year! 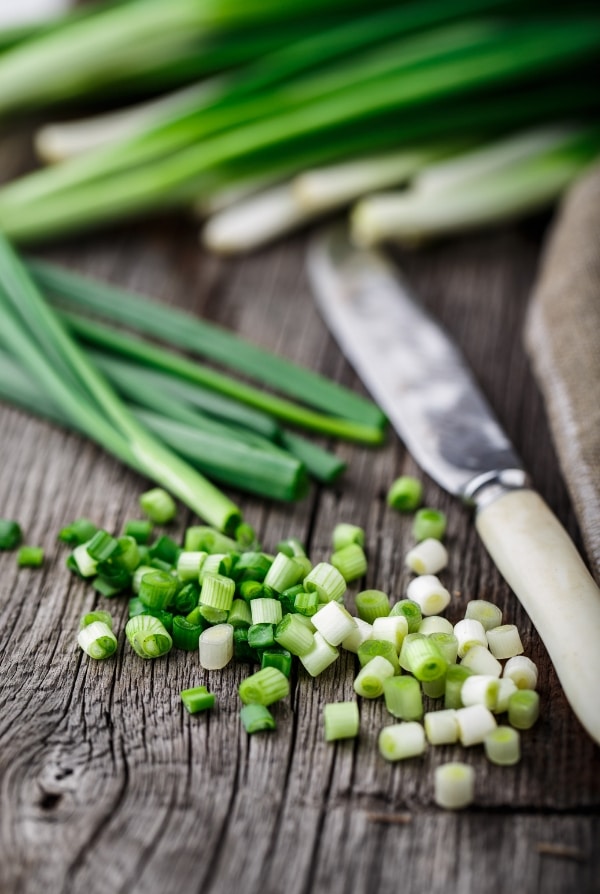 One of the best things about this Irish potato recipe is its simplicity. No fancy ingredients and the flavor is fantastic.

Traditionally when made in Ireland this Irish potato recipe would use a ‘floury potato’. The closest equivalent in the United States would be a Russet potato.

Loving Yukon Gold for their flavor and consistency, I’ve used them in this Irish Potato Champ recipe. 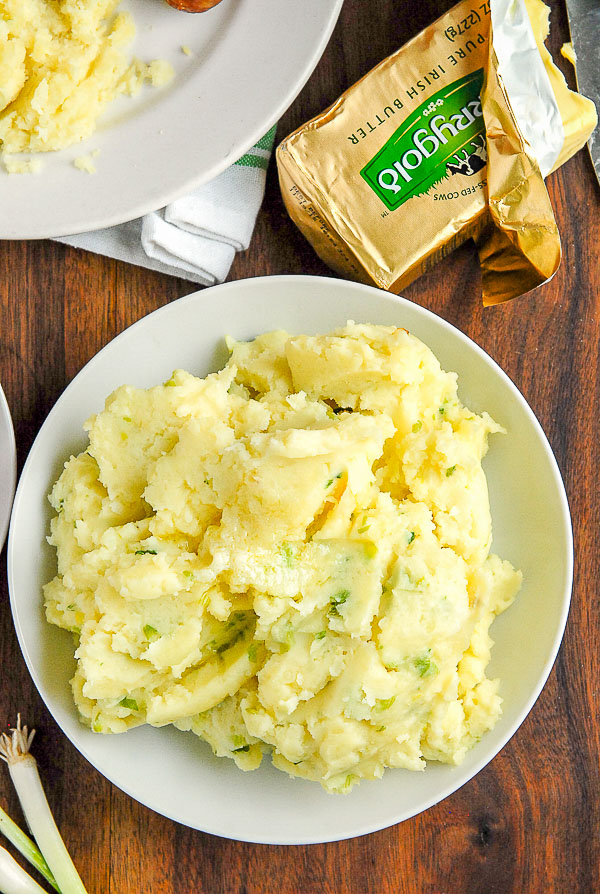 How to Make Irish Potato Champ – Step by Step: 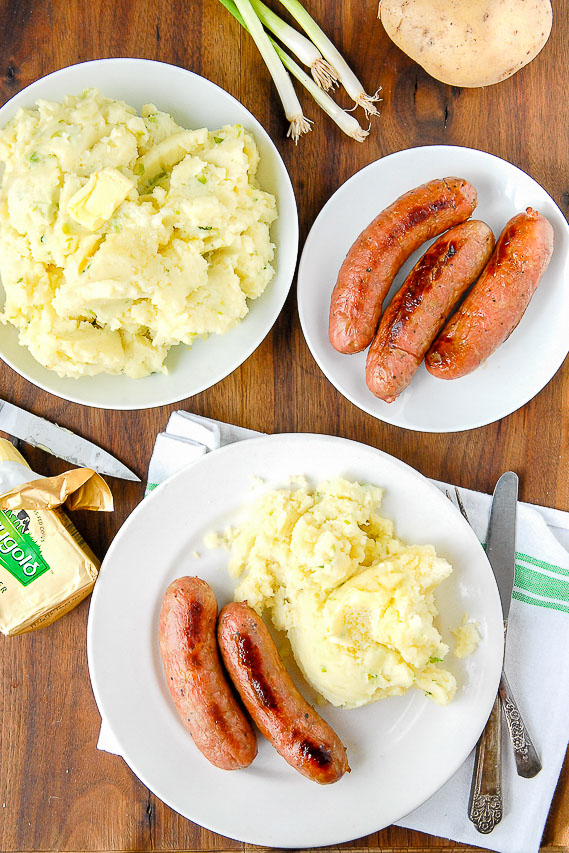 What to Serve with Irish Potato Champ

This Irish potato recipe is fantastic with just about anything and all year long (though perfect for an authentic Irish St. Patrick’s Day dish).

Some favorite ideas include: 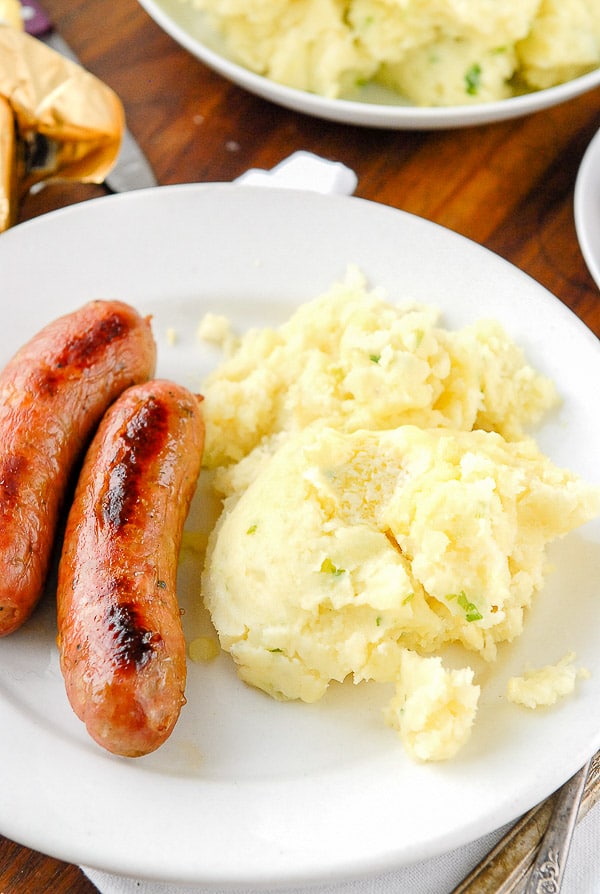 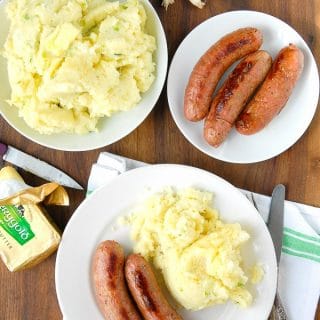 This simple, rustic version of mashed potatoes has a sweet springy flavor from the scallions steeped in milk. It is a satisfying dish on its own or paired with any protein.
5 from 20 votes
Print Save Recipe Recipe Saved! Pin Rate
Course: Side Dish
Cuisine: Irish
Prep Time: 15 minutes
Cook Time: 20 minutes
Total Time: 35 minutes
Servings: 6 1/2 cups
Calories: 279kcal
Author: Toni Dash
Prevent your screen from going dark