Most think of Guinness as the patron alcohol of Ireland but this authentic Irish coffee recipe is a gem! A warming combination of Irish whiskey, strong sweetened coffee with a cream float on top is a great after dinner cocktail or anytime to take the chill out of a day.

Irish Coffee is a great compromise between a cocktail and coffee.

Perfect after a filling dinner or if gluten-free a way to drink authentically Irish without the gluten found in a pint of Guinness.

This authentic Irish coffee recipe was picked up on my travels in Ireland from a Dublin barkeep in exchange for telling him if my hair color was really mine!

As things tend to go in Ireland, it comes with a tale I’ll not soon forget.

Prepared coffee. Make it strong and hot but not espresso.

How to Make Irish Coffee – Step-by-Step

Fill a brandy snifter or coffee mug with hot water.

Discard the hot water and fill the mug a bit over half full with prepared hot coffee.

Add an ounce of Irish whiskey.

Add cream to ‘float’. Turn a dining spoon upside down with the end just above the top of the coffee (see below).

Pour the cream onto the back of the spoon and let it settle onto the top of the Irish Coffee.

This will allow it to ‘float’ rather than mix directly with the coffee drink.

Whipped cream can be added instead if desired.

The Backstory of this particular Irish Coffee Recipe

I realize bloggers get a bad rap for sharing stories these days but this original story is too good to leave out. Feel free to skip right to the recipe below.

I have been fortunate to travel to Ireland many times, mainly for work. The first time I arrived in Dublin and exited the plane into the chilly, damp Irish air I was overcome by a feeling of being ‘home’.

I have had many an adventure on my travels including accidentally driving into Northern Ireland with a coworker during the Northern Ireland-Republic of Ireland conflict.

I’ve met many friends and shared many a laugh with them.

I was working in California at the time for a disk drive manufacturer. I was part of an international customer team that serviced Apple as our customer.

We had operations internationally as did they and we’d meet up quarterly for reviews of our manufacturing or repair facilities.

On this particular trip, we were reviewing a service center in Dundalk Ireland, quite close to the Northern Ireland border and then staying in Dublin afterward.

Somewhere during the meetings, my counterpart at Apple had requested after the meetings ended we go have a drink at a Dublin barrister (lawyer) bar in a prestige hotel where he heard the Rolling Stones were staying.

They had supposedly rented out the entire top floor of the hotel while recording an album that summer.

Truth be told, this chap could be a bit unwieldy and so, fortunately, some of my local work pals also came along.

We walked into the barrister bar and I felt like we were in a movie set. The room was full of only men, all with white wigs and neutral-colored business attire.

They all looked the same, chromatically that is. In aggregate they created a wash of visual neutrality, causing anything with color to pop.

I was sitting on a banquette facing the entire bar and the instigator of our visit was across from me. I had never seen the Rolling Stones in real life but of course knew what they looked like from album covers, TV, and the internet.

I ordered an Irish Coffee, (the exact recipe for the Irish coffee recipe below) feeling it would be a long wait. A bit like waiting for lions to appear on the Serengeti.

The actual physical bar was on the far end of the room from where we were sitting. I glanced over and looked down the long line of grey, tan and brown suited gray-wigged men.

My eyes stopped cold at a younger raven-haired shaggy doo in a bright blue velvet duster popping a bottle of champagne (everyone else was drinking pints).

I nudged my partner in crime across the table and discretely nodded toward the bar, ‘is that Keith Richards?’

He looked and barely able to conceal his excitement said ‘No, that’s Ron Woods. Keith Richards has had three full blood transfusions, his skin doesn’t look that normal’.

As he was saying this, a man in a similar shag haircut in a dark long coat and light gray boots walked just behind those at our table across from me, heading toward the bar.

As if in slow motion, I was hearing the words and studying the man in the coat. He looked like he’d lived quite a life and had the oddest pallor I’d ever seen.

I waited until my boisterous companion finished speaking and said ‘is THAT Keith Richards?’, sure that if someone were to have three full blood transfusions their skin would undoubtedly look like that.

Wide-eyed and almost speechless (a first in the time I’d worked with him), he answered ‘Yes that is Keith Richards’.

And that will be an Irish coffee I shall never forget.

The barkeep was nice enough to give me his recipe too. 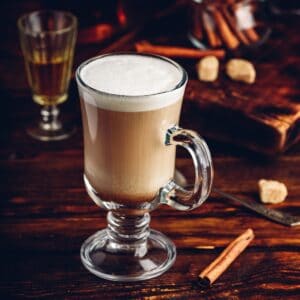