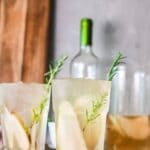 White Sangria is perfect for winter with flavors of pear, ginger, cinnamon and cloves. It’s an easy refreshing wine cocktail to have on hand and takes just a few minutes to make! 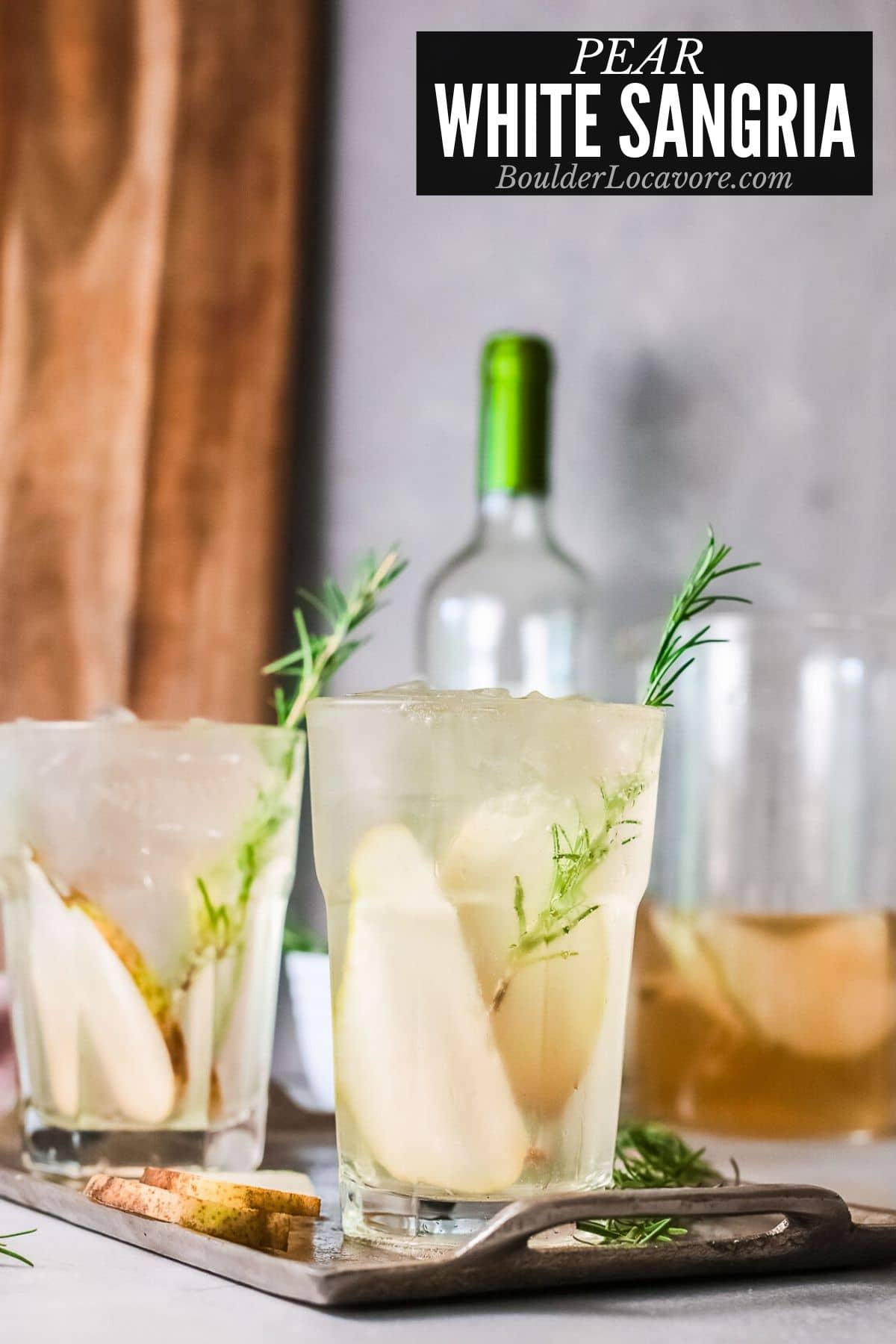 Most people think of lovely sangria as a summer cocktail. But this easy white wine sangria is perfect for the winter months and holiday season.

It’s light, refreshing and pretty with its all white presentation.

A dash of gingery fizz makes it festive feeling too!

It’s a wine punch originating in Spain and Portugal. A combination of wine (traditionally red wine), fruits and other spirits infuse for at least a few hours.

Then it’s finished with a sparkling water or soda for some fizz.

It’s often thought of as a summer wine cocktail but really is great all year round.

The wine, fruits and additional spirits can be changed up for the season.

We love Summer Fruit Sangria, Autumn Sangria and Winter Citrus White Sangria as much as the traditional red wine sangria. 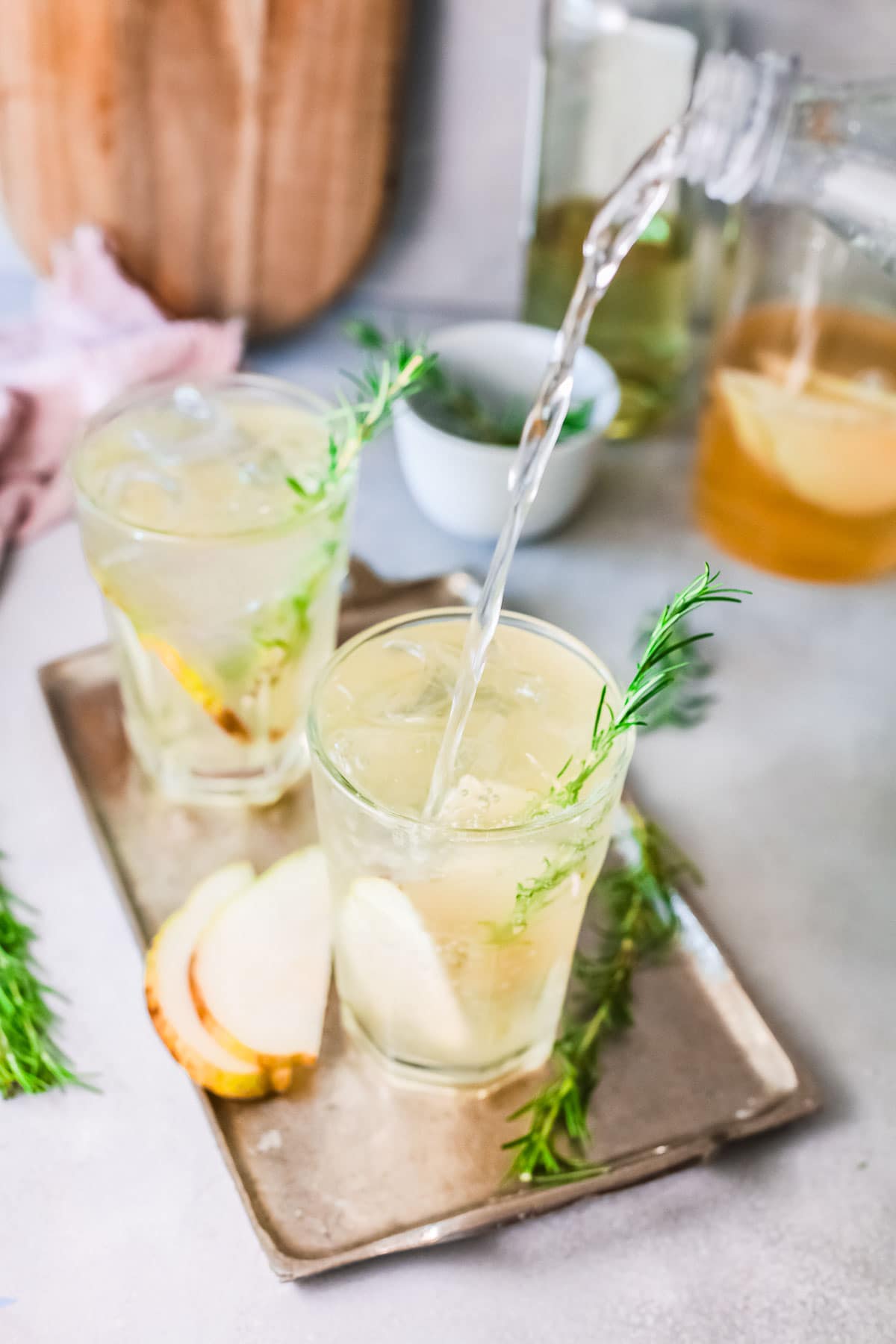 You might think of white sangria as a summer sangria. It’s true, a chilled white wine and light refreshing fruits would be perfect.

But the flavor of pear, cinnamon and cloves make this version beautiful and delicious for winter.

The pear is lightly sweet and doesn’t overpower the wine.

Instead of a splash of sparkling water we love ginger ale or ginger beer. You’ll get the fizz and the combination of ginger and pear is fantastic.

White Wine. You’ll use a 750-ml bottle of white wine. Do not use a sweet (dessert) wine but a dry wine. Some ideas below.

Apple Brandy. This gives a full apple flavor to the white sangria. Regular brandy can also be substituted.

Pear Juice. Fresh pears are very light in flavor. Adding pear juice adds a stronger flavor of pear along with the sliced fresh pears. For a sweeter choice pear nectar can be substituted.

Lime Juice. Just a bit brightens the sangria flavor without making it tangy.

Pears. Use pears that have ripened but are still firm (not mushy) for the best flavor and texture.

Cinnamon Sticks and whole Cloves. These add a bit of winter spice.

Gingerale or Ginger Beer. To add the classic fizzy touch to the white wine sangria we love ginger ale or ginger beer (which is non alcoholic).

Ginger ale is lighter in flavor than ginger beer. Both have a wonderful ginger flavor that is perfect with this sangria.

Sparkling water or club soda can also be used. In our tests we found it really watered down the sangria flavor instead of pumping it up like the fizzy ginger options did.

Ice. Will be added to the serving glasses of sangria. 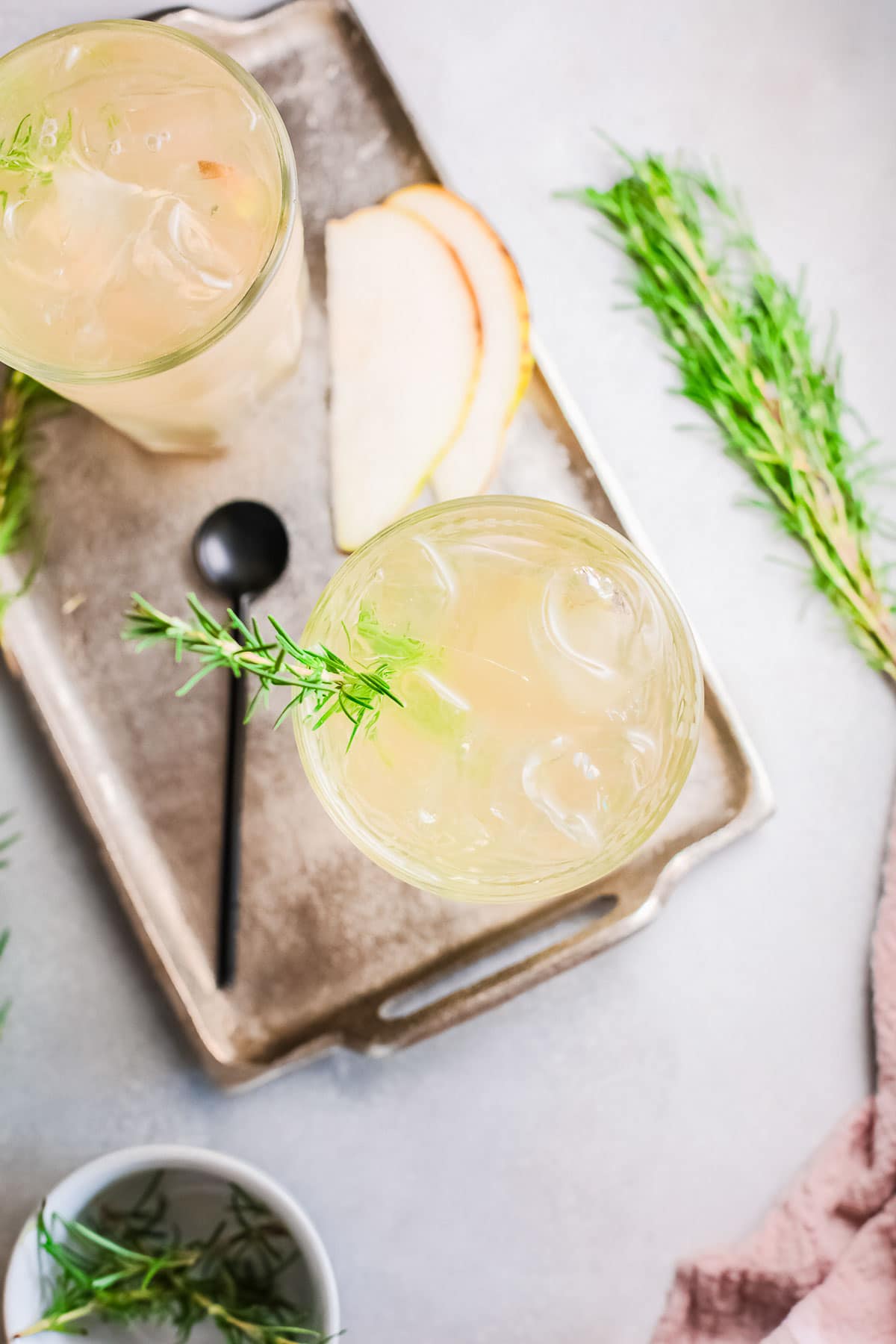 What white wine is best for White Sangria?

Any dry white wine will work and each will add a slightly different flavor. We love Sauvignon Blanc or Pinot Grigio but have also made it with Chardonnay.

If you like something slightly sweeter try Moscato (we’ve used that for its own Moscato Sangria).

Because the wine is mixed into the sangria you won’t need the most expensive bottle of wine. Choose something mid-range in your budget that you like.

Stir and cover (or seal if using a jar).

Place in the refrigerator for 4-6 hours. 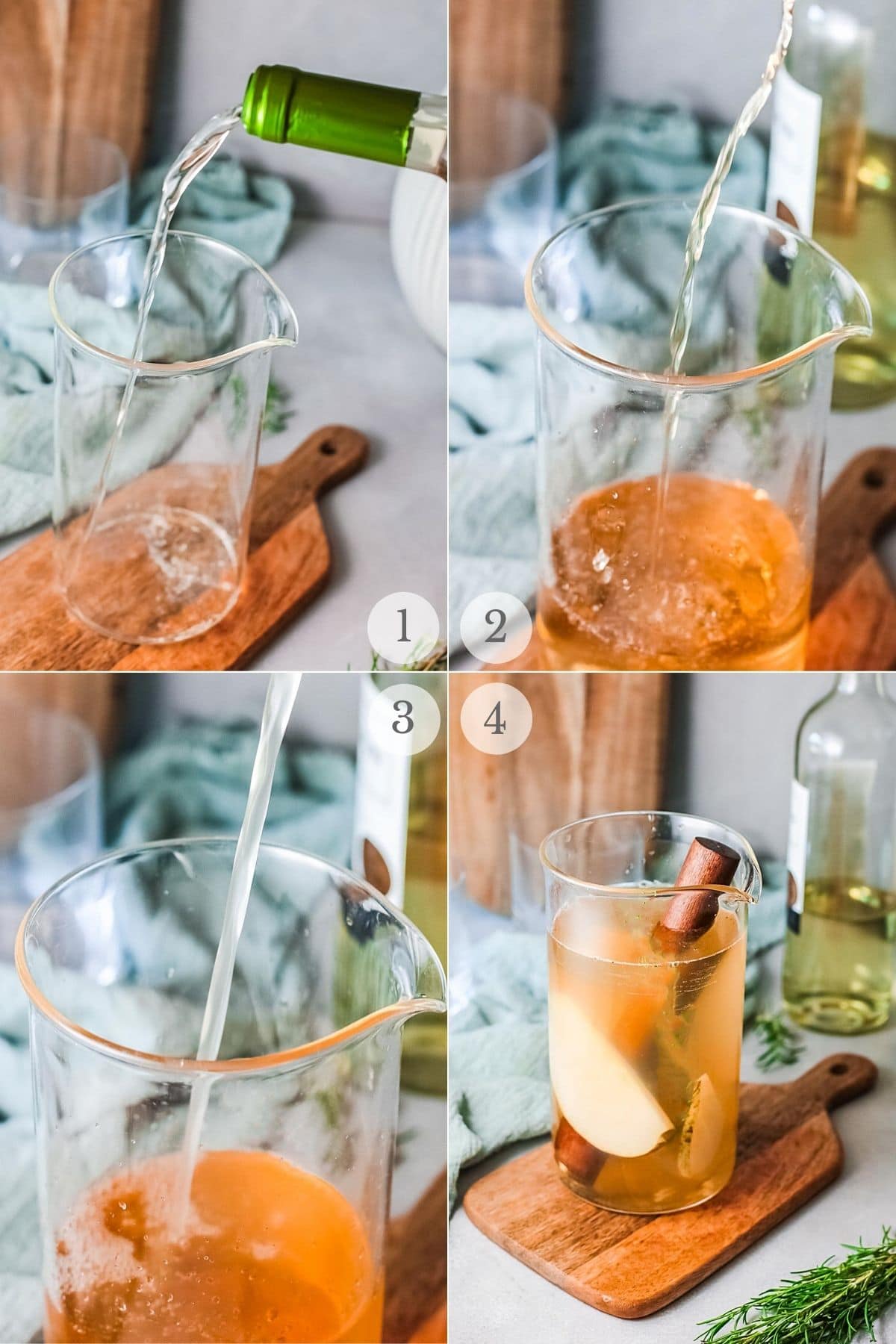 After the wine cocktail has infused, fill 8-10 ounce glasses with ice. Fill 3/4s with sangria and top with ginger ale or ginger beer and serve over ice.

Add a sprig of rosemary and a fresh pear slice for garnish.

Chill the ginger ale or ginger beer. Adding it chilled to the sangria will keep the drink cold and the ice will last longer.

Stick the whole cloves into a slice of pear before infusing. This makes them easy to remove!

Remove the spices after infusing the sangria. After the initial infusion I remove the cinnamon and cloves so they don’t become too strong as the sangria sits in the fridger.

Store it sealed in a jar or if in a pitcher covered, for up to 1 week.

Do not add the ginger ale or ginger beer directly to the sangria; only when serving.

Another great way to store it is in a glass jar with a spigot. You can pour some from the refrigerator whenever the mood strikes. 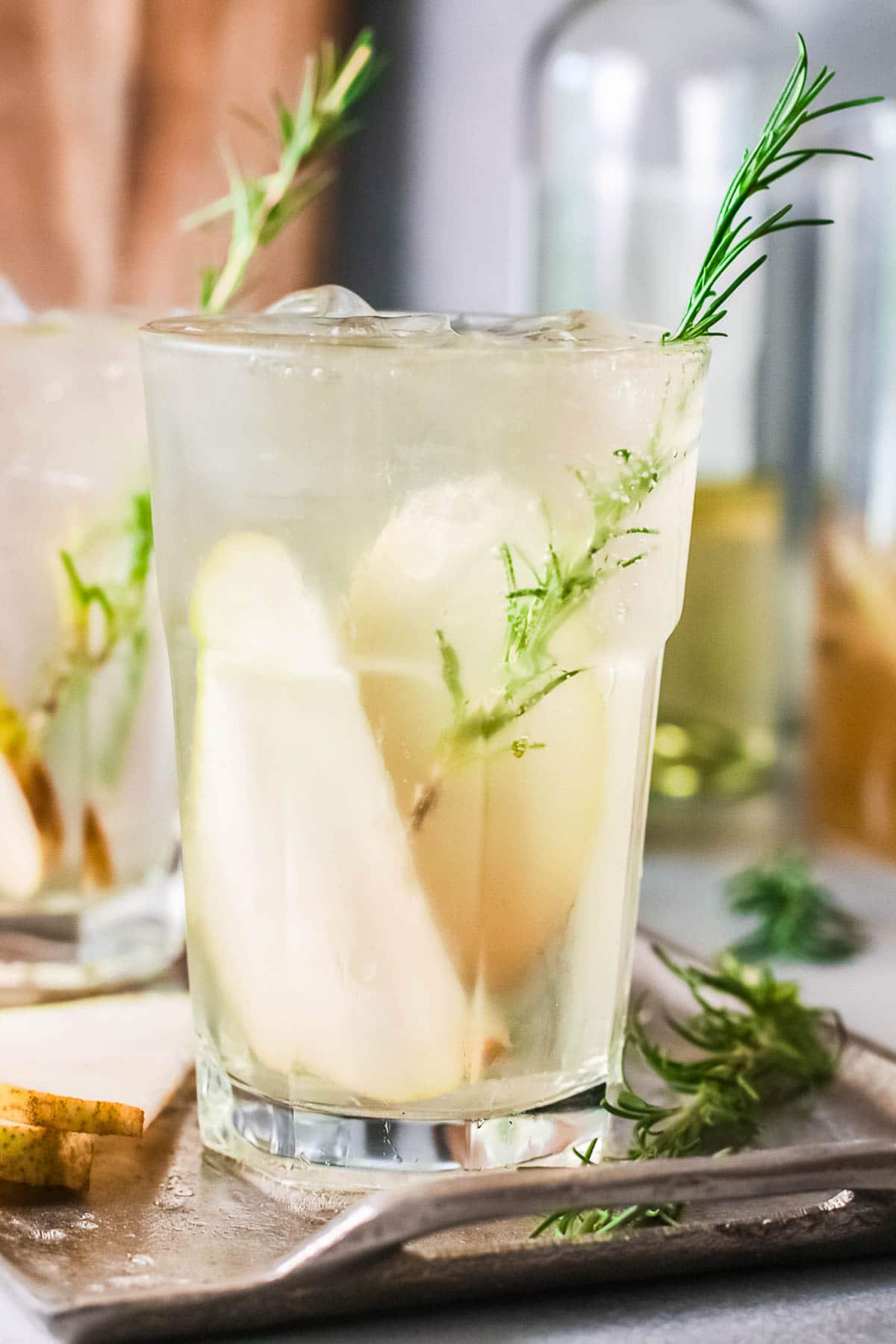 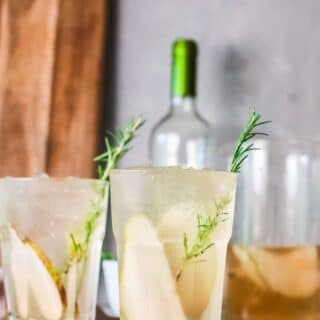