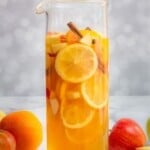 Celebrate the time of year with crisp apple cider and cinnamon flavors in this easy Apple Cider Sangria! This white sangria is easy to make and full of delicious flavors.

It’s a pitcher cocktail making it easy to prepare and serve at gatherings or holiday parties too (think Thanksgiving).

Like Apple Cider Moscow Mules, fall sangria is one of those signature cocktails you’ll love!

It’s an infused wine cocktail (think ‘punch’) originating in Spain. Traditionally it is made with red wine but white sangria is also very popular especially in the hotter months.

Wine, fruits and usually another liquor or liqueur is combined, infused and then served with a fizzy ingredient to make it sparking.

This delicious apple cider sangria is made with crisp white wine, fresh apple cider, fall fruits and served in a large pitcher. Perfect for any fall gathering.

Apple Cider. Use fresh pressed apple cider if you can find it in the fresh juice section of local grocery stores. It’s sweet and has a wonderful apple flavor. Any apple cider will work. If you want a clear golden sangria do not use unfiltered apple cider which has apple particles in it.

Lemon. You’ll use one, sliced.

Apple. You’ll use one, sliced. We love honeycrisp apples. They have a great blend of sweet and slightly tart flavor, and hold up well to soaking. Any apples will work.

White wine. You’ll need 1 750-ml bottle. Dry white wines works great in this sangria recipe but feel free to go for a sweeter wine for a different flavor. Use your favorite white wine. Sauvignon Blanc or Pinot Grigio are favorites. A sweeter Riesling will work too.

Rum. Brandy is often added to sangria but we opt’ed for rum. It works great with the apple flavor. We usually use light rum but if preferred dark rum will work too!

Ginger beer or Ginger ale. Sangria is topped off with something fizzy and we love spicy ginger beer (which is non-alcoholic). It has a strong ginger flavor without being as sweet at ginger ale. The flavor combination of apple and ginger is a classic and delicious. You’ll need about 12-ounces. It’s used just to add some fizz.

Club soda can also be used and will not add any flavors to the sangria.

Pitcher. If serving in a pitcher you’ll need a 2 quart pitcher or larger. The sangria can also be infused in a large jar and served in a pitcher.

Use spiced rum. Omit the spices and substitute spiced rum for the regular rum. You can even use homemade apple spiced rum!

Swap the rum for apple brandy. To add even more apple flavor, use apple brandy instead of rum.

Using hard cider. For fizzy AND more booze, use hard cider instead of ginger beer to top off when serving.

Use a reusable tea bag for the spices. These are fantastic for small loose spices (not ground) that will be strained out of a recipe. Place the allspice berries in this and remove when the sangria is done infusing.

How to make it – Step-by-Step

Slice the lemon and orange. Cut the apple into apple slices or chunks. The fruit does not need to be peeled (photo 1).

Pour the apple cider, rum and wine into the pitcher (photos 5-6). Add the spices (photo 7).

Chill for at least 2 hours for the flavors to blend.

Pour sangria top of each glass with ginger beer, ginger ale or club soda for some fizz!

Add some fresh fruit when serving as garnish. Granny smith apple slices, fresh orange slices or a mix of red apples and green apple slices with a cinnamon stick are all great and decorative options!

Can I eat the fruit from my sangria recipe?

My rule of thumb is to taste it first. It’s safe to eat but sometimes after you’ve let the fruit soak it absorbs the ingredients in a way that does not make it taste great. If you like the taste, YES, eat it!

Keep sealed in the refrigerator for up to 4-5 days. After the initial infusing the fruit can be removed and discarded (this also protects the sangria flavor from becoming bitter from the citrus). 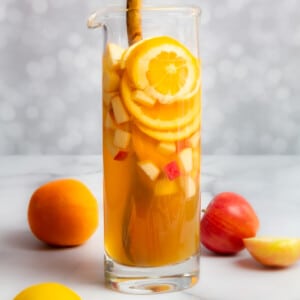