Home » Recipes » Side Dishes » A Complete Guide to Artichokes 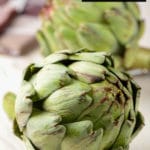 This ultimate guide will help you with Everything You Need to Know about Artichokes! How to Cook, Buy and Eat them. 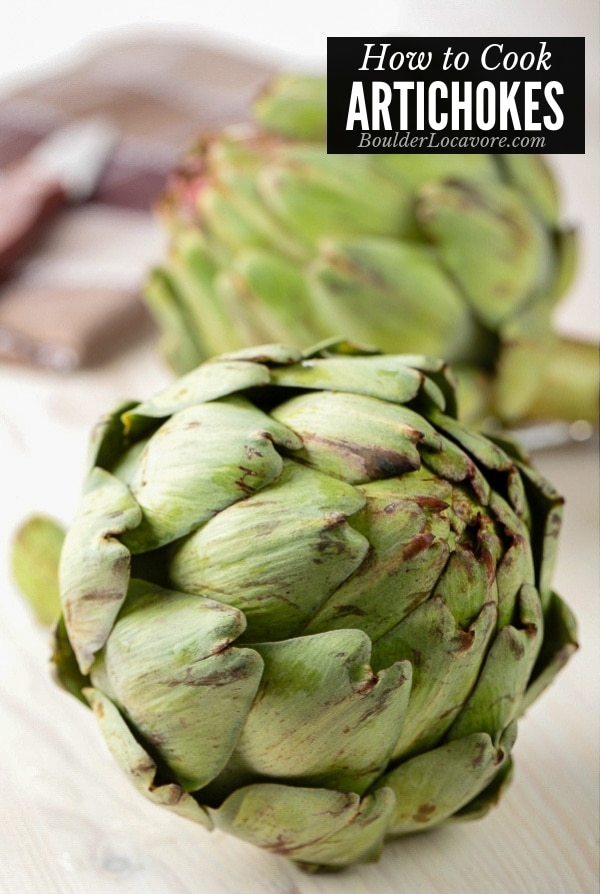 There is absolutely nothing intuitive about Artichokes; how to pick them, cook them and certainly not how to eat them.

I was fortunate to grow up with Grandparents in Northern California where we’d drive through artichoke country often.

I spent years driving by the prehistoric looking spiky plants with one choke spouting above the plant.

And fortunately was taught young how to tackle an artichoke, as well as the delicious end result when they are well prepared.

Once the puzzle of how to cook artichokes and how to eat them is solved, they may become your new favorite spring vegetable!

What is an Artichoke?

There is no clue when looking at an artichoke that it should be eaten!

They are a large member of the thistle family and are considered a vegetable. 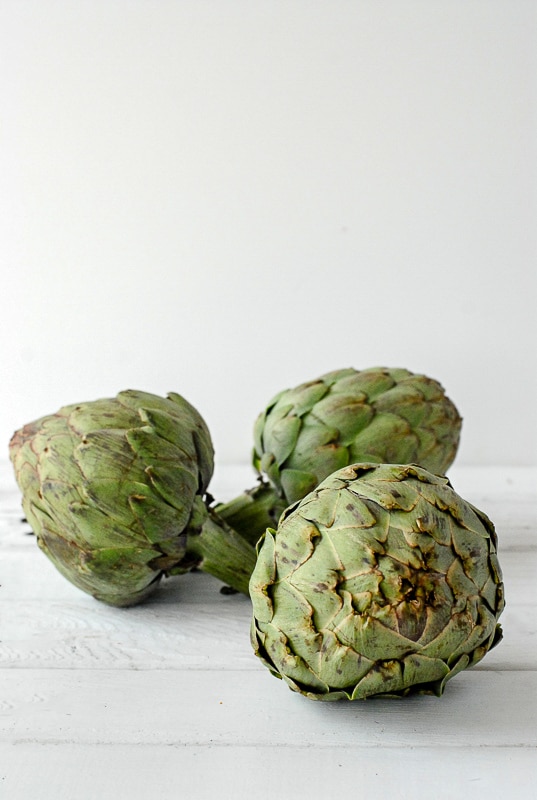 What Part of the Artichoke Can be Eaten?

When cooked, the underside of the leaves reveals soft flesh that is delicious.

The favorite part however is buried deep inside the outer leaves: the artichoke heart.

They are sold in marinated in jars.

However, when you eat a fresh artichoke, the heart is the reward for all your efforts with a lightly sweet flavor and creamy texture.

When are Artichokes in Season?

We are currently in artichoke season which lasts primarily from March until June.

A second smaller crop is grown for a fall harvest as well. 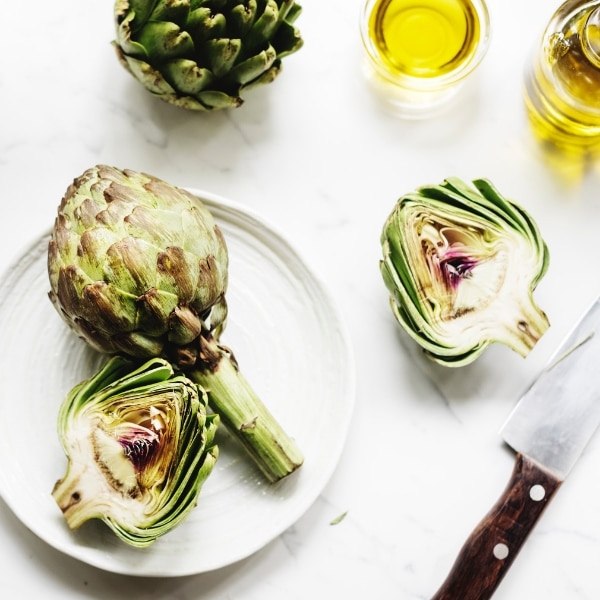 Where to Find Artichokes?

If artichokes are not local to you, check stores with more extensive produce departments (Whole Foods for instance). Farmer’s Market’s may sell them too.

How to Select them

When purchasing select artichokes with leaves that are tightly closed, forming a bit of a baseball looking appearance (for larger artichokes; smaller varieties will appear more oblong).

You’ll note those in my photos look a bit scarred.

I’m not concerned with that as it could be from a frost or other natural circumstances.

They are tight and looked very healthy once I began to trim them. 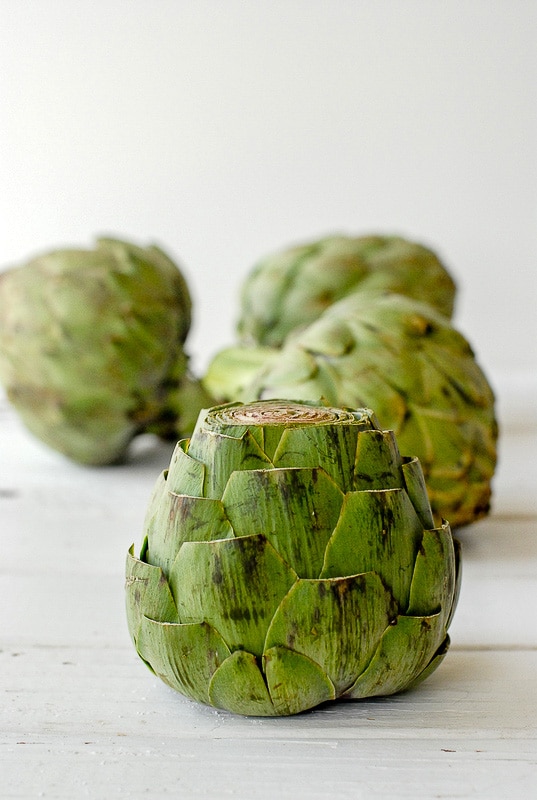 How to Trim Artichokes

Being a thistle artichokes have natural protective aspects like a thorn on the end of each leaf.

To prepare them for cooking:

The photo below will guide on the steps for trimming. 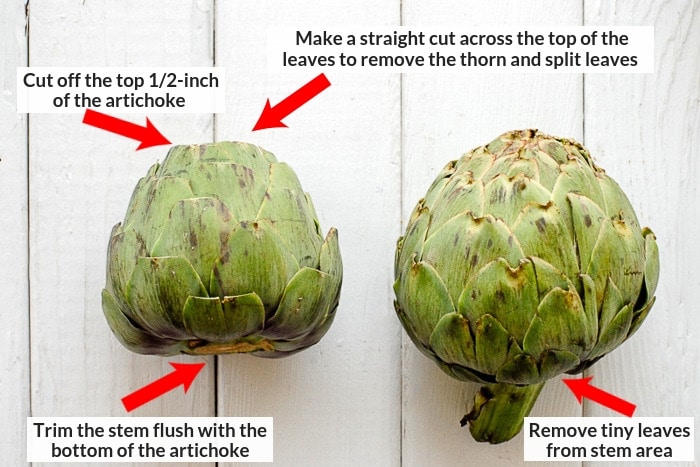 How to Cook them

Artichokes are typically steamed or boiled. Either method takes about the same amount of time; 25-30 minutes.

I prefer steaming artichokes to cook them well and to retain more flavor.

My preferred method: I use an in between method of putting the artichokes in about 2-3 inches of liquid (I mix white wine and water with some sliced garlic cloves for flavor).

A steamer basket can also be used if preferred.

How To Check Artichokes Are Cooked

Check for doneness by pulling on the lower outer leaves; if they can be removed easily the artichoke is done. If not add a bit more cooking time. 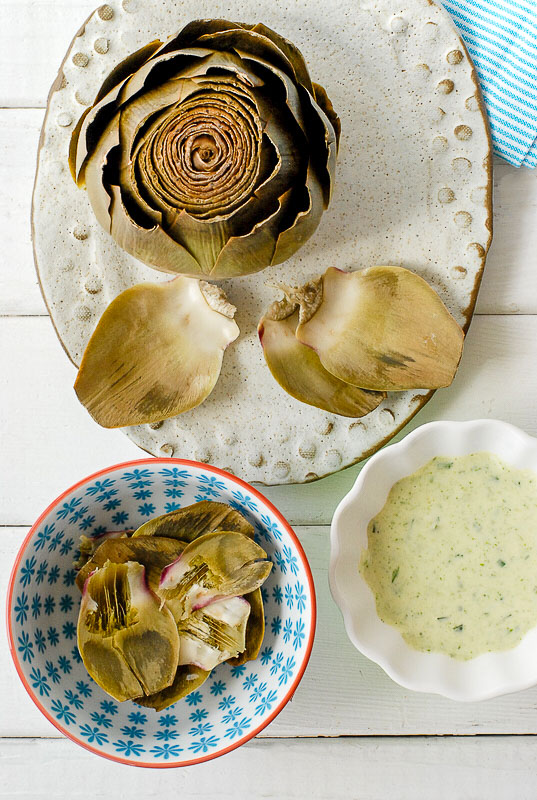 How to Eat an Artichoke

I cannot think of any other food that requires such an unconventional consumption method!

But once you are in on the secret you’ll be an instant pro.

How to Eat the Leaves

When the artichoke is cool enough to handle, pull off the leaves and scrape them along your teeth to remove the softened ‘meat’ of the inner leaf.

The Outer Leaves – Scrape them on Your Teeth

This is the only vegetable eaten this way to my knowledge. Once you figure it out, it’s like being in a secret club!

A Pro Tip: If you bite too hard you will not be able to pull the leaf out, scraping the artichoke into your mouth.

The outer leaves of the artichoke are tougher than those toward the center.

Normally the inside of the artichoke leaf is soft and yielding, releasing the sweet meat of the leaf readily.

The leaves in the very center are paper thin. Remove the paper thin leaves to get to the heart. 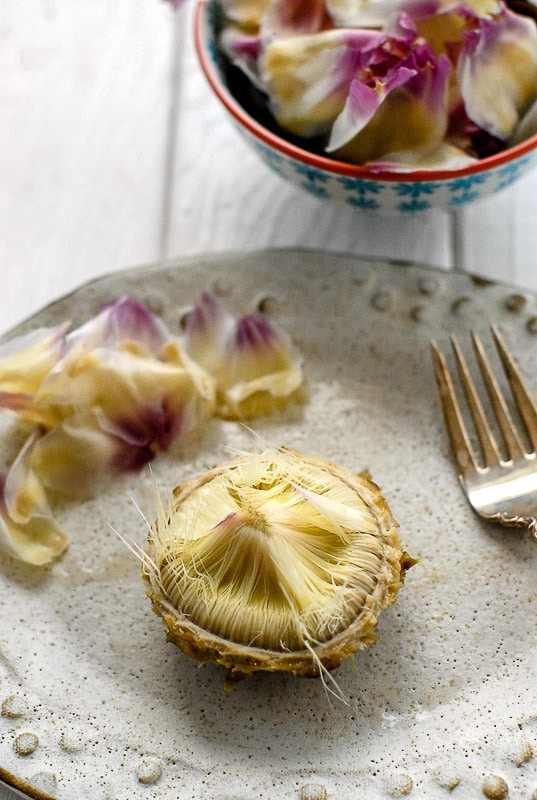 The ‘choke’ of the artichoke

The Choke and the Heart

As if this could be any stranger to eat, once you have eaten or removed all the leaves you will arrive here: the choke.

Beneath the soft fuzzy choke is the most delicious part of the artichoke: the heart.

How to Prepare the Artichoke Heart

Run a sharp knife underneath the fuzzy choke (just underneath it so as to not remove any of the heart) in a circular pattern to remove it.

Underneath will be the heart; the sweetest part of the artichoke.

It has a fantastic thick, dense almost custard-like consistency.

Slice it up and enjoy it; it’s worth the work of getting there. 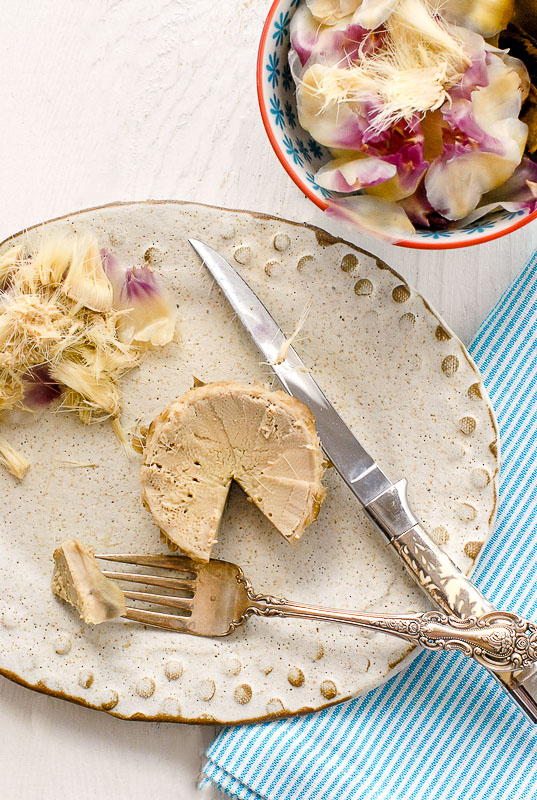 The coveted ‘heart’ of the artichoke

Artichokes are often are paired with flavors of lemon and butter for dipping.

They have a subtle but distinct flavor that is even better with some fat.

Dip the leaves prior to scraping for a delicious bite. 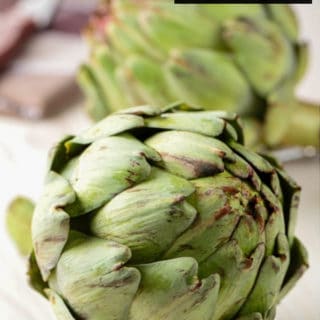 How to Cook Artichokes