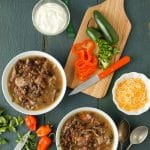 Nothing takes the chill out of a winter’s day like a steaming hot bowl of a hearty homemade soup. Easy Slow Cooker Black Bean and Hambone Soup with Cumin will fill your kitchen with irresistible aromas while deliverying a satisfying meal.

I am of the belief that often the more simple food is the best and this Slow Cooker Black Bean and Hambone Soup with Cumin certainly fills the bill! In the cold weather months, rustic recipes always tug at my food sensibilities like an irresistible child begging for me to come along on one of their meanders. I’m never disappointed. Hearty flavors, chunky textures and some healthy, whole ingredients always lead me where I want to go.

Soup is definitely a favorite at this time of year. I really could eat it for every meal. Over the winter holiday we had a ham for one meal. After enjoying the initial meal, nibbling on the ham itself, making it into several dishes, we were down to the bone and small pieces of meat that would not amount to anything on their own. 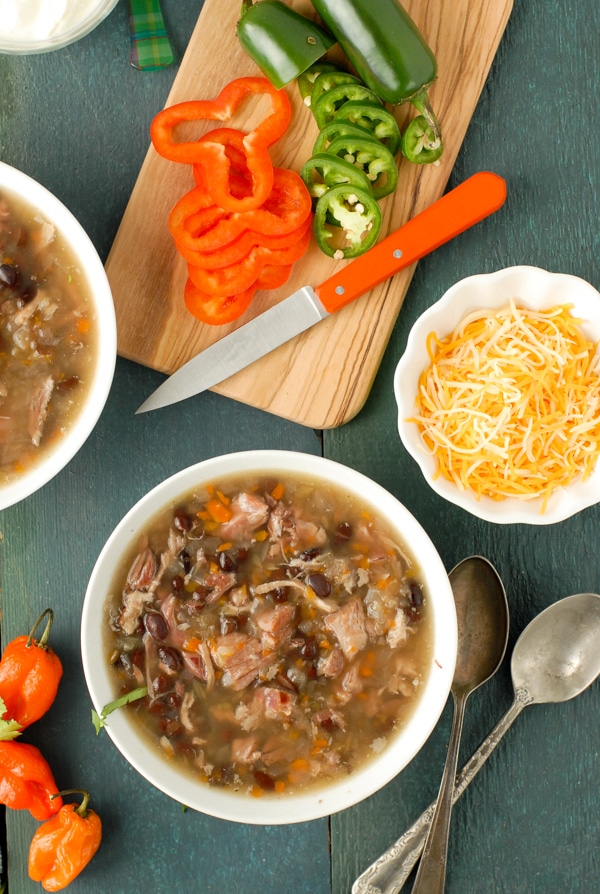 A favorite thing I’ve begun to do especially after Easter when we often have ham, is to make Ham Stock. If you’ve never made it you really must. It is a luscious broth that elevates any soup.

On this occasion I really wanted to make some ham and bean soup with the help of my slow cooker but did not have any ham stock. The long hours of simmering in the slow cooker build a fantastic stock thanks to the addition of the holy trinity for homemade stock: carrots, celery and onions.

I’ve made this simple Slow Cooker Black Bean & Hambone Soup with Cumin recipe with the ingredients for a from-scratch broth, black beans, the ham bone and favorite spices. The aroma as it simmers throughout the day is spicy and soul-warming. It’s not a heavy soup but dense with the vegetables, beans and ham.

The flavors are similar to a chili so it’s a great soup to layer on some toppings such as diced cilantro, sliced jalapenos, a dollop of sour cream, or grated cheese. It’s a healthy, satisfying soupthat will become a family favorite.

TIP: if you make this soup with a stripped down ham bone or hock with no meat on it, you can add 1/4 pound of thick cut ham (1/2 inch thick), from a deli, chopped, to add more flavor and texture if desired. 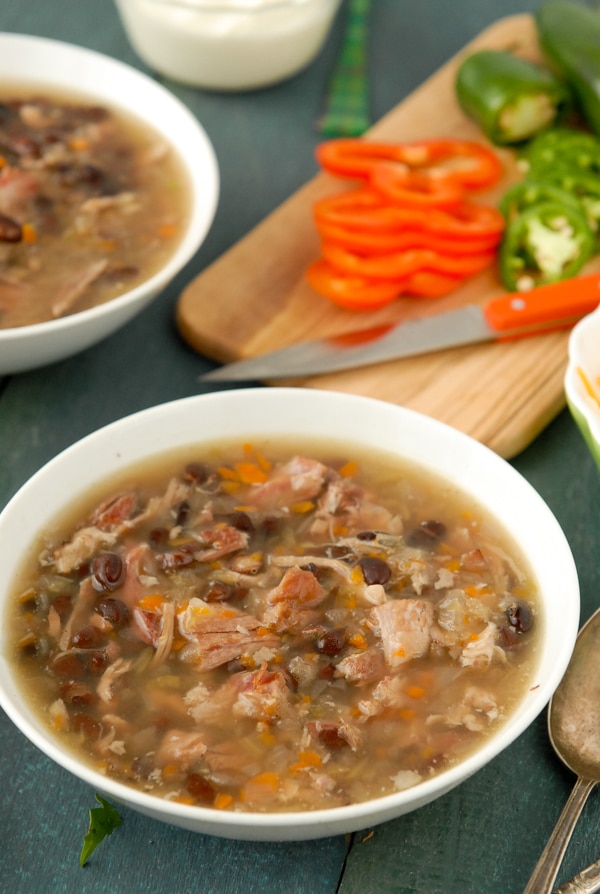 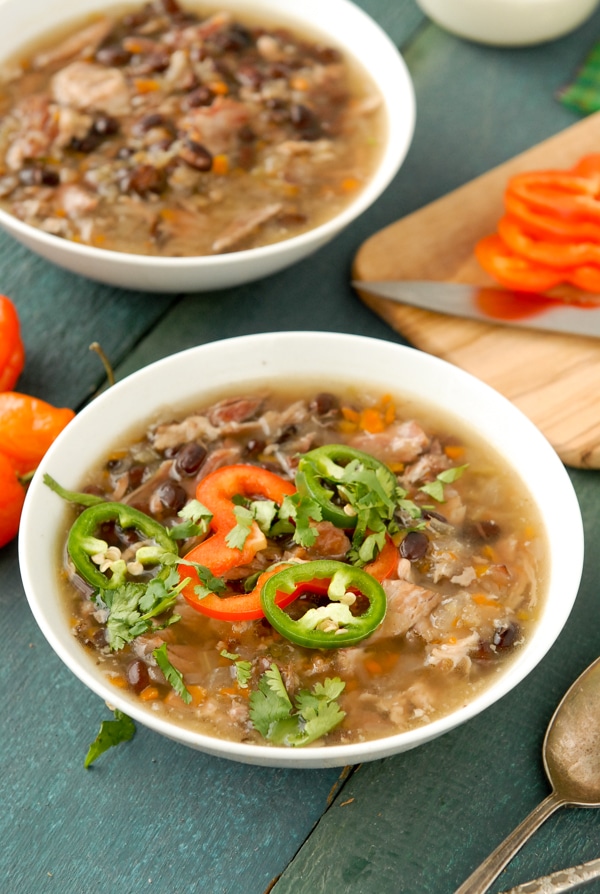 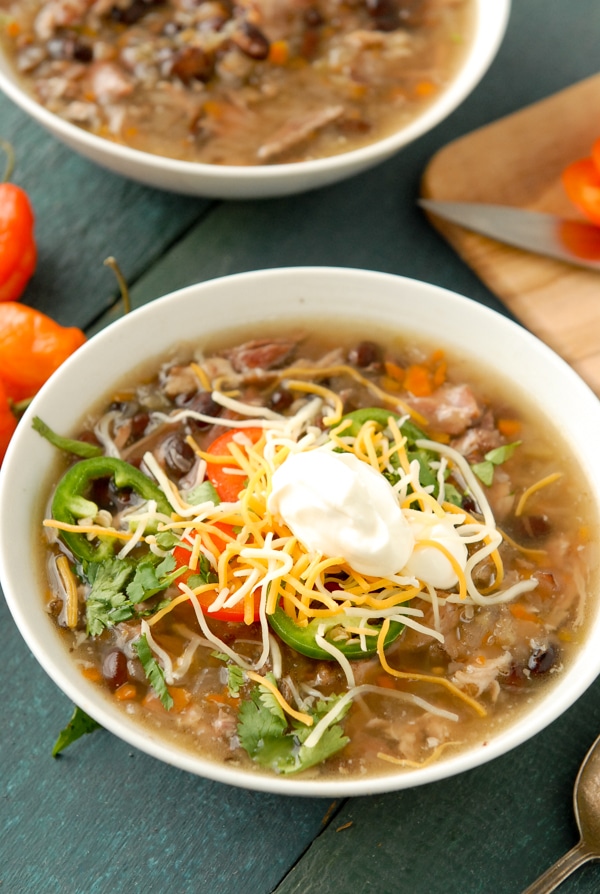 If you’ve tried this Slow Cooker Black Bean and Hambone Soup with Cumin or any other recipe on BoulderLocavore.com please don’t forget to rate the recipe and let me know where you found it in the comments below, I love hearing from you! You can also FOLLOW ME FACEBOOK, TWITTER, INSTAGRAM and PINTEREST to see more delicious food and what I’m up to! 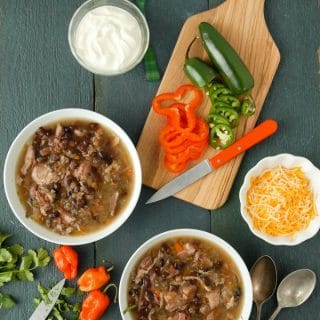 With the help of the slow cooker, this healthy, flavorful Black Bean & Ham soup will fill your house with a delicious aroma. It takes little preparation and is a great use of a leftover ham bone. If you make this soup with a stripped down ham bone or hock with no meat on it, you can add 1/4 pound of thick cut ham (1/2 inch thick), from a deli, chopped, to add more flavor and texture if desired.
5 from 3 votes
Print Save Recipe Recipe Saved! Pin Rate
Course: Soup
Cuisine: American
Prep Time: 15 minutes
Cook Time: 8 hours
Total Time: 8 hours 15 minutes
Servings: 7 1-cup servings (depending on the amount of ham)
Calories: 96kcal
Author: Toni Dash
Prevent your screen from going dark