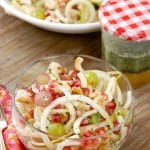 Spiralized Apple and Pears Pomegranate Slaw with Honey Poppyseed Dressing is a great way to add a little fruit to your winter diet! 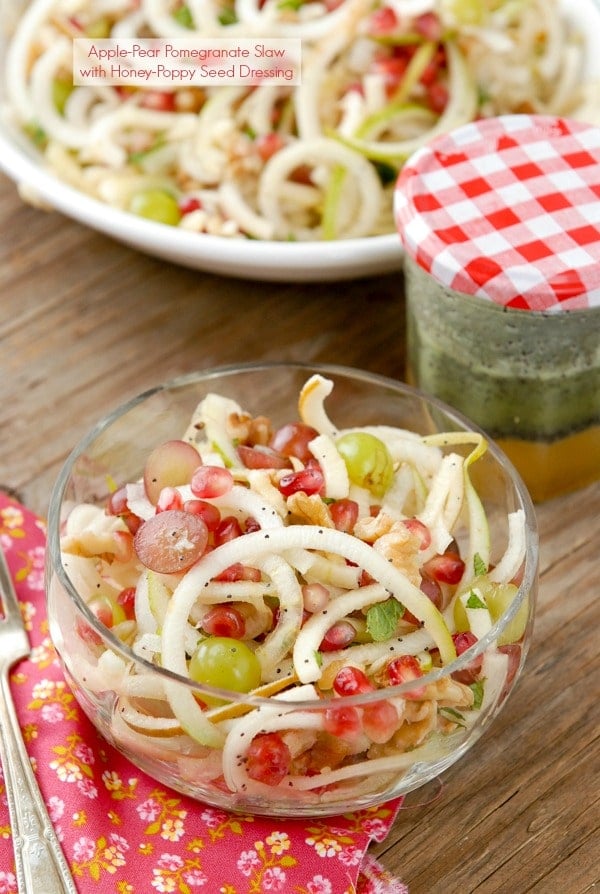 I absolutely love fruit but it takes a back burner in the winter. It’s cold outside, fruit is generally cold and I want warm foods like soup. When I do eat fruit it’s seasonal, like apples, pears, and some citrus. My repertoire broadens when adding it to smoothies but I don’t give it much thought to eat on its own.

Having said all of this I also find by this time of winter I’m regularly dehydrated. And as a consequence, I begin to crave fruit again. Not like in the summer when if no other food existed I’d be happy. This is more like a desperate craving trying to extract any available moisture into my parched core. 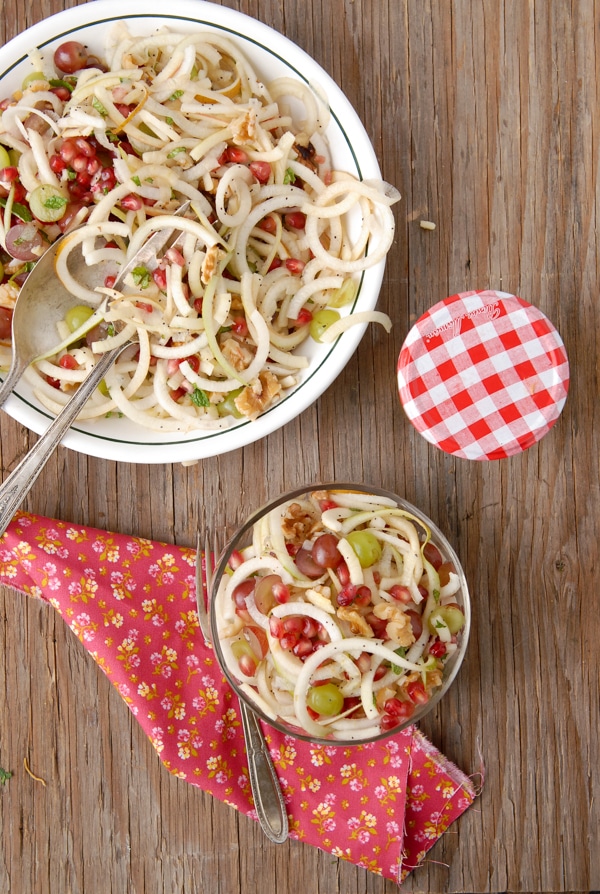 I’ve made no secret of my love of the Spiralizer. I bought one last year with high hopes of creatively developing new, fresh recipes that would allure my family into eating produce in whimsical curls and ribbons. I’ve loved it so much I try to make up a new recipe every week.

Winter squash has been a favorite. It’s deeply flavorful and roasts to a pasta-consistency in less than 10 minutes. Top it with anything you would a pasta and your nutrition benefits have gone up a notch while being completely satisfying. 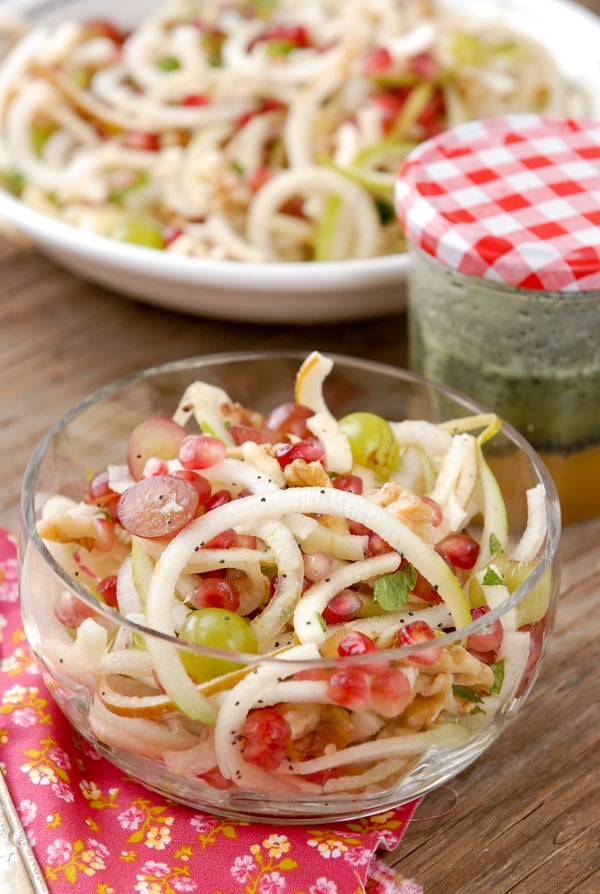 How to make a Sprializer Apple and Pears Slaw

This week I made an Apple and Pears Slaw with red and green grapes, pomegranate arils, walnuts, fresh mint and a light Grapeseed Oil-Apple Cider Vinegar Honey Poppy Seed Dressing. It is fantastic!

I used a large Honeycrisp apple which has full flavor and a wonderful firm consistency (perfect for Spiralizing). A firm Bartlet pear and an Asian Pear also were turned into large curly cues, retaining a crunchy texture along with their pleasing shape. Tossed with the other ingredients and a crunchy, seasonal slaw is born. Little dressing is needed so it stays healthy and uses healthy fats in the grapeseed oil and walnuts.

If you’ve tried this Spiralizer Apple and Pears slaw or any other recipe on BoulderLocavore.com please don’t forget to rate the recipe and let me know where you found it in the comments below, I love hearing from you! You can also FOLLOW ME FACEBOOK, TWITTER, INSTAGRAM and PINTEREST to see more delicious food and what I’m up to! 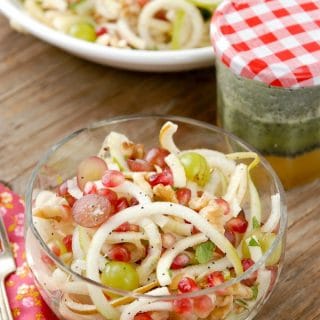 When making the slaw it is not necessary to peel the apple or pears. In fact not peeling them leaves a bit of extra color to the spirals. Using the larger 1/4-inch 6mm noodle blade allows the spirals to retain their crunch and form.
Tossing the slaw is most easily done with one's hands to ensure all the delicious ingredients are well mixed. The dressing recipes makes more than enough for the slaw. I only used a few tablespoons for the slaw. It is a delicious, light dressing perfect for dressing greens or other salads. Store the dressing sealed in the refrigerator.
5 from 1 vote
Print Save Recipe Recipe Saved! Pin Rate
Course: Salad
Cuisine: American
Prep Time: 20 minutes
Total Time: 20 minutes
Servings: 8 cups slaw
Calories: 201kcal
Author: Toni Dash
Prevent your screen from going dark

Ingredients for the Apple-Pear Slaw:

Ingredients for the Honey Poppyseed Dressing:

Ingredients for the Apple-Pear Slaw:

To dress the salad: