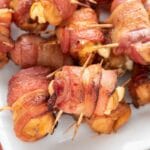 If you love Jalapeno Poppers you’ll do cartwheels over this Jalapeno Chicken Popper version. They have the classic spicy jalapeno and smooth cream cheese flavors along with chicken, bbq sauce all wrapped in bacon!

This mouthwatering appetizer recipe is something you’d expect to order at a restaurant. Perfect for Happy Hour’ing.

Instead we’ve brought it into the home kitchen and kicked it up a couple notches!

It’s easy to make, with only a few ingredients but bold with exciting flavors. Your friends and family will love it!

If you haven’t ever had a jalapeno popper they are halved jalapenos filled with cream cheese, sometimes spices, cheese, ground meat or bacon.

They can be deep fried or baked and are absolutely delicious!

Our version keeps the core ingredients but adds some more. And changes the form!

Chicken breast strips marinated in barbecue sauce, filled with cream cheese and a slice of jalapeno rolled in bacon.

Chicken Jalapeno Poppers are bigger than a bite; more like two bites, and a filling appetizer size.

These are not blistering hot like regular Jalapeño Poppers. They have a hint of jalapeno and crunch from them too.

You could always add more piece to make these poppers spicier if desired.

A quick broil at the end leaves a crispy coating that’s irresistible.

There are only five ingredients and once you’ve rolled the first popper you’ll be an old pro! There are step-by-step photos below to help!

Boneless Skinless Chicken Breasts. This is usually around 2 chicken breasts but go by the weigh. The breasts will be pounded and marinated before adding to the jalapeno poppers.

Barbecue Sauce. Store bought or homemade bbq sauce can be used. The chicken will marinate in the sauce before making the poppers.

Jalapeno Pepper. You’ll need one large pepper. It will be seeded and cut into think spears.

Cream Cheese. Be sure to start with softened cream cheese!

Bacon. Do not use extra thick bacon. Regular bacon works best to wrap around the jalapeno poppers.

Wooden Toothpicks. These are used to secure the poppers before cooking. Do not use plastic toothpicks since they’ll go in the oven.

Place chicken between two pieces of plastic wrap and pound to a 1/2-inch thickness.

Place in a zipped plastic bag with the barbecue sauce. Seal and massage the sauce into the chicken from the outside of the bag.

Place in the refrigerator for at least 2 hours up to overnight.

Preheat the oven to 350 degrees F. Line a rimmed baking sheet with foil and fit with a wire rack.

Slice the jalapeno pepper lengthwise. Remove the stem and seeds. Cut lengthwise into 1/8-inch thick strips then into 1-inch lengths. Refer to photos 3 and 4.

Remove the chicken from the marinade and discard the marinade. Cut into 1-inch wide strips. Cut those strips into 3-inch long pieces.

Place a strip of the chicken on the work surface. Dab off any excess sauce (photo 1).

Spread 1 teaspoon cream cheese on the top of the chicken (photo 2). Add 1 piece of the jalapeno in the middle (photo 3).

Fold in half with cream cheese inside (photo 4).

Set a cut piece of the bacon on the work surface. Place the folded chicken on the bacon, with the open sides facing the ends of the bacon strip (photo 5). Leave about 1 inch on the right side of the chicken.

Fold the short end of the bacon over the right side of the chicken (photo 6).

Gently stretch the long end of the bacon over the chicken and roll to enclose (photo 7). Secure with toothpicks (photo 8).

Place on the prepared rack and bake for 30-35 minutes.

Place the baking sheet one rack position down from the broiler. Broil for 1-2 minutes, flip over and broil 1-2 minutes more to crisp the bacon.

Allow to rest for 5 minutes before serving.

Can Jalapeno Chicken Poppers be grilled?

I’m sure the chicken poppers could be grilled indirectly, similarly to these Smoked Blue Cheese Stuffed Bacon-Wrapped Chile Peppers.

Cook over indirect heat. This will prevent the poppers from drying out or any flare ups from the bacon fat.

Place a drip pan under the grates where the poppers are cooking to catch any rendered bacon fat.

Due to the small size of the poppers they will need to be grilled on foil or in a grill basket.

Grill until the chicken is cooked through (estimated time 30 minutes).

What is the best way to pound chicken?

Placing it between two sheets of plastic wrap protects the chicken from the pounding utensil. A meat tenderizer, rolling pin or bottom of a heavy cast iron skillet all work well.

Store any leftovers in an airtight container in the refrigerator for up to 3 days. If desired the toothpicks can be removed before storing.

Reheat in the microwave or air fryer just to heat through. 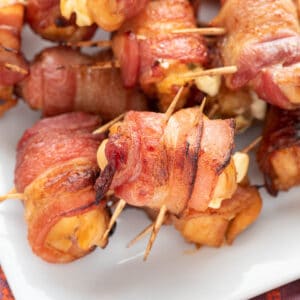 Ingredient notes Bacon: use regular thickness bacon for best results. How to grill Jalapeno Chicken Poppers Storing Leftovers Store any leftovers in an airtight container in the refrigerator for up to 3 days. Reheat in a microwave or air fryer. Toothpicks can be removed before storing.