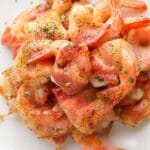 Bacon Wrapped Shrimp is an easy, delicious 4-ingredient appetizer recipe! Brushed with butter and Cajun spices, the bacon is crisp and shrimp are perfectly cooked, never dried out. And of course bacon makes everything better!

This recipe is quick to pull together with only four ingredients! Shrimp cook quickly and are protected by crispy bacon for great flavor and texture.

Bacon wrapped appetizers like Devils on Horseback and Chicken Jalapeno Poppers always are a hit with family and friends.

Enjoy them for a hearty snack during the day or a nosh before dinner. A great option for Game Day!

The bold flavors, fast cook time and easy preparation make them a favorite.

This is a very easy appetizer recipe and it’s completely delicious.

First, anything with bacon is usually a hit. Wrapping with bacon keeps the shrimp from drying out. It has perfect texture after cooking.

The bacon crisps without become brittle. Adding the Cajun seasonings gives it a bit of spice without being too much.

This is a great choice as an appetizer and will not take long to prepare.

It also can be a main course combined with a side salad for a lighter meal.

The recipe is ready in about 30 minutes.

Use regular thickness bacon. Thick cut bacon doesn’t wrap as easily around the shrimp. It also will not cook as well for the amount of cooking time.

Each slice of bacon will be cut into thirds making three pieces of bacon for wrapping the raw shrimp.

It is not necessary to cook the bacon before wrapping the shrimp. The oven temperature and cook time ensure regular thickness bacon is cooked!

This is melted to baste the bacon wrapped shrimp for cooking. Using unsalted butter helps keep the sodium amount in check.

There will be enough from the bacon and the Cajun seasoning.

If desired olive oil could be substituted for butter however it has a different flavor.

This gives the shrimp some spiciness and bolder flavor. Try to use a Cajun seasoning that does not start with salt as the first ingredient. It can lead to the finished shrimp tasting a bit salty.

Or you can make your own Cajun seasoning too!

Use medium, raw, peeled and deveined shrimp preferably with the tails still on. Having the tails on gives something to hold onto when handling the shrimp.

The shrimp can be fresh or previously frozen and thawed; it just should not be cooked.

‘Medium’ is a subjective term so I use the shrimp count as a guide.

What is the shrimp count?

When buying shrimp whether fresh or frozen most will have a number associated with the size. This is the number of shrimp in a pound.

So the lower the number, the larger the size of the shrimp. And the higher the number the more you’ll get in a pound and the shrimp are smaller in size.

For this recipe I use 26-30 count. This size yields a good amount of shrimp for appetizers or a main dish with some sides.

Wrap each shrimp with one of the cut pieces of bacon (1/3 of a full strip). Place the shrimp in a single layer on the prepared baking sheet (photo 1).

It is not necessary to secure with a toothpick.

STEP 2. Brush with the butter-seasoning.

Combine the melted butter and Cajun seasonings together. Brush half of the mixture onto the top of the shrimp on the baking sheet (photo 2).

Place the plan in the oven and bake for 15 minutes.

Remove from oven and brush the remaining butter mixture onto the shrimp.

Place back into the oven under the broiler. Broil the shrimp for 3-5 minutes until the bacon is crisp (photo 3).

NOTE: it’s not necessary to move the oven shelf higher to be closer to the broiler. Just monitor the bacon and allow it to cook until it is crisp as seen in the photo above.

Place the shrimp on two layers of paper towels to soak up any excess fat before serving.

NOTE: the bacon on the underside of the wrapped shrimp will be fully cooked but not as crisp as the top side that has been broiled.

Do not use pre cooked shrimp. The shrimp used in this recipe should be raw. They can be fresh or previously frozen.

Do not broil right underneath the broiler. The closer to the broiler the faster the food will cook and possibly burn. Performing the broiling step lower in the oven allow you to see better how the bacon is cooking.

It takes a few minutes longer but is worth it to make sure the appetizer cooks perfectly.

This recipe is best served hot out of the oven. Chilling and reheating the shrimp will not have the same texture or crispness of the bacon. 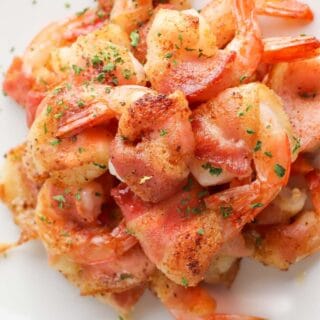 This fast and easy appetizer is full of flavor from the bacon and Cajun spices. The shrimp are perfectly cooked and do not dry out thanks to being wrapped in bacon!
5 from 13 votes
Print Save Recipe Recipe Saved! Pin Rate
Course: Appetizer
Cuisine: American
Prep Time: 15 minutes
Cook Time: 20 minutes
Total Time: 35 minutes
Servings: 4 aproximately 8 shrimp per serving
Calories: 243kcal
Author: Toni Dash
Prevent your screen from going dark

Note: the bacon on the underside of the wrapped shrimp will be fully cooked but slightly softer than the top which has been broiled. Tips Do not use thick cut bacon. It will not wrap well or cook fully in the time allowed. Use medium size raw, peeled and deveined shrimp. It can be fresh or previously frozen. I use size 26-30 (the number of shrimp in a pound).