Home » Holiday » What IS Boxing Day Anyway? (with Chutney Recipe) 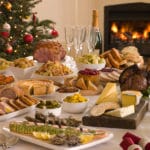 What is Boxing Day? Sharing all the details for those who have wondered and an authentic Chutney recipe for Boxing Day lunch.

Chances are if you are from the United States, or even countries not tied to the U.K., the idea of ‘Boxing Day’ is a mystery. Is it a sporting event? Is it a second Christmas of opening gifts?

The definitive answer to the question ‘What is Boxing Day?’ will be answered along with traditional and even a recipe for your own Boxing Day lunch (or any other time)!

What IS Boxing Day?

It originates from servants having to work over the Christmas holiday (December 25th).

Alms (donations, food/money for the poor) were gathered in the churches’ donation boxes; and gifted to these workers, along with the day off on December 26th, or Boxing Day.  The ‘box’ part being the church donation box.

Technically Boxing Day is the first week day after Christmas which generally will be the 26th.

Where is Boxing Day Celebrated?

Mainly in the United Kingdom (and countries with ties to the UK like Canada, Australia, New Zeland and South Africa). A handful of European countries also celebrate it.

In modern day it offers another gathering holiday for family and friends. An occasion to chat, over-eat, play games and maybe take a stroll.

It is also a big shopping sale day on the level of the United States’ ‘Black Friday’ day after Thanksgiving.

Historically there was fox hunting as well though governmental regulations have attempted to put the kibosh on that.

I was curious if there are traditional meals or foods that are part of Boxing Day.

I checked with friends from Bristol England about traditional foods for the holiday. They have kindly shared some personal insights for those of us not practicing the holiday.

On Boxing Day most families in Britain begin to use up the left-over turkey from Christmas Day.

There is usually an enormous joint of gammon ham or roast beef still around from Christmas Eve as well.

Boulder Locavore:  According to Heinz website “In the UK Heinz Baked Beans are iconic”.  Who knew?! 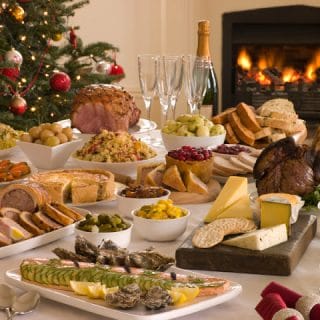