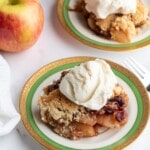 Apple Crisp is the favorite easy apple dessert of fall. It’s far easier than apple pie and ours added dried cranberries and nuts! There’s nothing as good as warm apple crisp with a big scoop of vanilla ice cream!

This easy Apple Crisp recipe is straight out of my grandmother’s recipe box. It’s a longtime family favorite during apple season and just one bite will explain why.

Sweet honey apple, cranberry and walnut filling topped with a crisp golden brown crust. It’s one of those easy recipes everyone loves.

No fussy steps and hours to make this favorite fall dessert. Easy to make regular or gluten-free with a flour change (we’ve made it both ways).

AND I’m sharing a secret ingredient I use to give it a little kick!

Classic apple crisp is a favorite fall recipe. It’s made with simple ingredients and always gets rave reviews.

Like many family recipes this Apple Crisp recipe of my grandmother’s is a favorite. It’s undergone a few changes in my kitchen.

The original recipe uses raisins, and those can still be used. I did not have any when I first made it but did have dried cranberries. They make the best apple crisp recipe! The cranberries have become a favorite and perfect for the holidays.

Apple Crisp is defined by its topping, which usually includes oats.

This recipe does not use crispy oats. Instead of oatmeal topping, the crisp topping is a combination of flour, sugar and butter. It bakes to a fine crisp texture that’s wonderfully delicious.

Apples. You’ll need 5-7 sweet apples peeled and sliced to yield 8 cups. For favorite types of apples see the section below.

Lemon Juice. Freshly squeezed lemon juice always has the best flavor. It both adds flavor and helps the apples not brown as much.

Walnuts. Chopped walnuts give this homemade apple crisp a wonderful flavor and bite.

Granulated Sugar. Gives the sweetness in this delicious dessert.

Nutmeg. A bit of this fall-flavored spice adds wonderful flavor to the apple filling.

All Purpose Flour. Regular or gluten-free measure-for-measure flour can be used. We love using Bob’s Red Mill gluten-free 1-to-1 baking flour in our gluten-free desserts.

What are the best apples for Apple Crisp

The perfect apple to use is firm crisp apples that will hold their structure during baking. Though the apples soften when cooked you don’t want them to turn out mushy.

A single type of apple can be used or they can be mixed.

Here are some great apple favorites:

This might sound bizarre but I add a little bit of mild chile powder to this apple crisp recipe when I make it.

Anyone who has enjoyed dining in Santa Fe will know the wonders of combining the earthy flavors of mild chile powder with cinnamon and sweetness. I use mild chimayo chile powder but this recipe is delicious without it too.

And if you like that you’ll probably love our Jalapeno Cranberry Sauce for holidays too! Kicks it up a notch.

Use brown sugar. For a more caramel flavor mix in some light or dark brown sugar for a portion of the granulated sugar.

How to Make Apple Crisp – Step-by-Step

In a large mixing bowl combine the sliced apples, lemon juice, cranberries, walnuts, ½ cup of the sugar, and the spices (photos 1-2).

Toss apples to fully coat and mix the ingredients (photo 3).

In a medium bowl combine the remaining ½ cup sugar, flour and cut in the butter with a dough blender (also called a pastry blender or pastry cutter) or a fork until crumbly (photos 5-6).

Bake for 40 minutes or until the topping becomes golden brown (photo 8).

Remove from oven and allow to cool 5 minutes before serving.

Use a pastry blender for the topping. Though a fork can also be used a pastry blender best combines cold butter into the other topping ingredients. The end topping will have a sandy consistency with no large pieces of butter; it will all be incorporated.

The moisture in the apples will effect the cooking time. AND how juice the crisp is. If you use apples that are not very moist and reach the end of the cooking time without them being fully cooked, loosely cover the pan with foil. This creates some humidity as it cooks.

Apple crisp can be left out, covered, at room temperature for up to 2 day. We prefer to refridgerate any leftovers with the baking pan covered or placed into an airtight container for up to 4-5 days.

To reheat, servings can be mircowaved or even popped into an air fryer to crisp up the top.

What’s the difference between Apple Crisp and Apple Crumble?

They are similar in that they both have a sweet apple layer. The topping is what makes them different. Typically apple crumble is usually topped with a streusel which remains cakey when baked. Where an apple crisp usually includes oats or nuts which become crisp when baked. Technically this recipe may also be considered an apple crumble though in our family it has always been Apple Crisp.

How to keep the topping from getting soggy?

This is something that happens to oat toppings. With this recipe the topping does not become soggy when stored in the refrigerator in the same way as an oat topped crisp.

The top is browning faster than the apples are cooking!

If this happens place a piece of foil loosely over the top of the pan and cook until the apples are done. 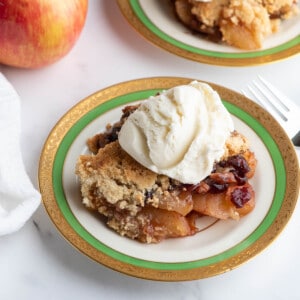 Apple Crisp with Cranberries and Walnuts