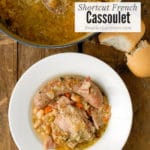 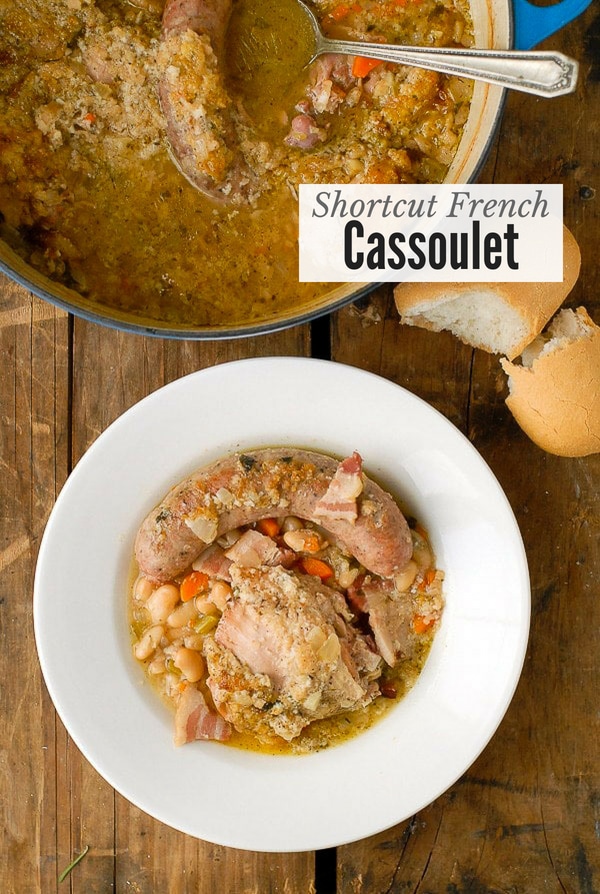 Cooler weather calls for hearty soul-warming recipes. A long time favorite of mine is Cassoulet, a French country stew that’s hearty, relaxed and brimming with great ingredients and flavors.

When made traditionally Cassoulet takes three days. I’ve come up with a modified version, staying true to the original flavors but whittling it down to a few hours to make!

Shortcut French Cassoulet is sure to become a favorite; if not for the flavors and textures, then for the flexibility to change it up with ingredients you love. 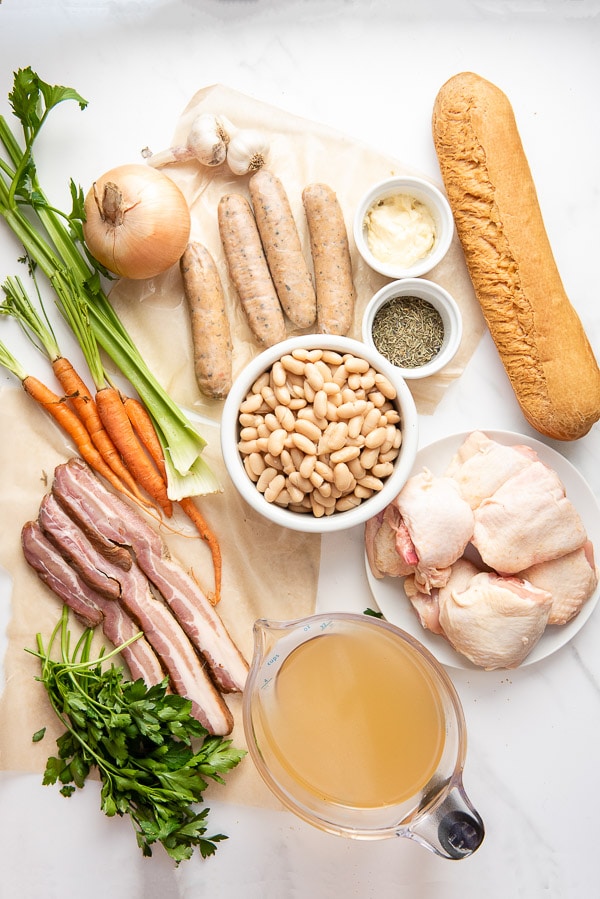 It is an iconic white bean and meat stew, and perhaps the best example of peasant country food.

It is said to try the most authentic Cassoulet when in France, do not go to a restaurant but rather have a Farmer’s wife make it for you!

Recipes vary greatly for this dish as it originally was made with what was available however meat, pork and beans are a constant.

A traditional cassoulet would include white beans, duck or duck confit, pork, sausages, and/or mutton. However, it was a peasant’s stew, constructed based on availability of ingredients therefore varying readily.

Typically, it is a long cooking dish often taking days to prepare. This recipe is a shortcut, staying true to the rustic intentions of the stew but timed for more modern lifestyles when lengthy cooking projects are challenging. 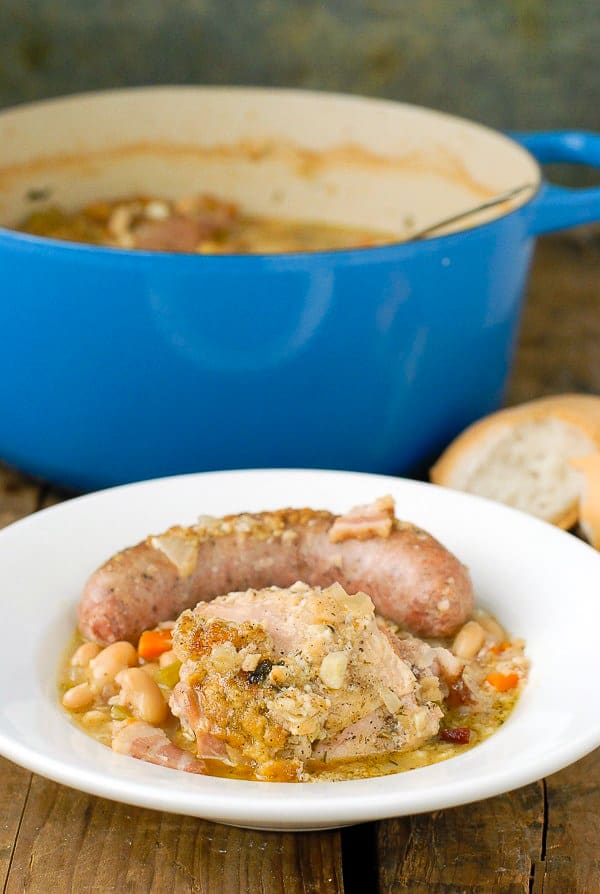 How to pronounce Cassoulet?

Where is it From?

The origins of the dish reside in Southwestern France in the areas of Gascony and Languedoc.

How to Make Cassoulet

When reviewing current day recipes, whether they be from traditional French chefs or chefs with a more contemporary perspective, they also vary wildly.

More than a particular ‘recipe’ it is more of a cultural dish.

Other than the white beans (which can also vary between traditional Tarbais beans, haricot blanc, to Cannellini), one might find any type of meat as long as there is some pork if not two forms.

With the goal of making a Shortcut version I made some modifications to allow enjoying the dish without slaving to make it! 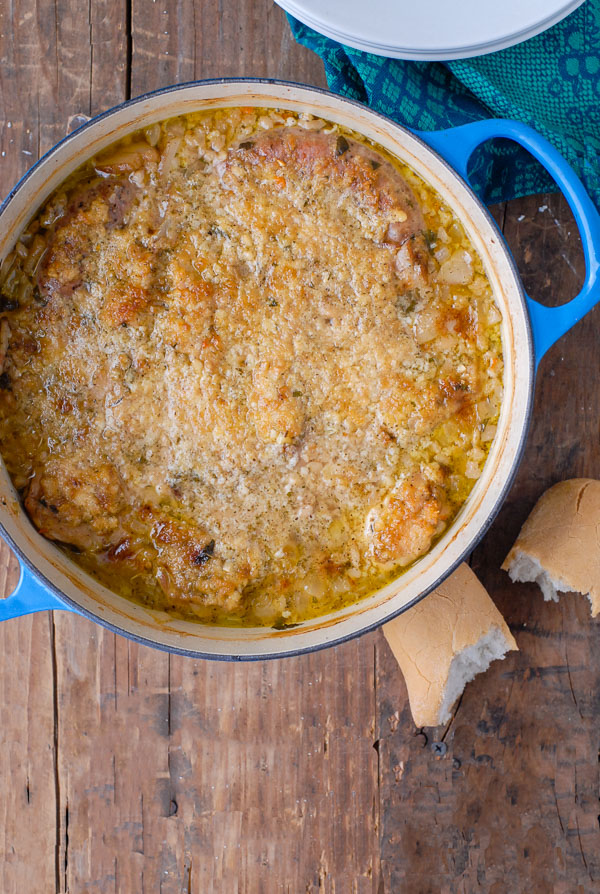 To make Cassoulet in a reasonable amount of time I changed up some of the ingredient preparations to creatively meet the flavors of the dish without the time.

I was also mindful of using ingredients that were easily available.

Time-Saving Tip: To make the cooking even faster, the vegetables may be prepared the day prior to cooking and stored sealed in the refrigerator until cooking is ready to begin! AND I use a mini chopper to prepare them.

A Note on Duck Fat

Duck fat may be found in gourmet kitchen stores or online. It’s not cheap however. That being said, duck fat can be subsituted anywhere you’ll be sauteeing for a wonderful flavor and it lasts a long time.

Butter can be substituted and the cassoulet will be delicious! Olive oil can be used in a pinch but will not conjure the same flavor.

If you are a duck fan, you can also add some duck instead of the chicken to change the recipe up!

This recipe is soul-warming with simple, homey flavors. The ease of preparation allows this shortcut recipe to pay homage to the more time-intensive version, and to be more of a mainstream consideration rather than something one saves up days to prepare (though that would be fun too).

The oven is preheated to 350 degrees

In a heavy 5 1/2 quart Dutch/French oven, the duck fat or butter is melted. 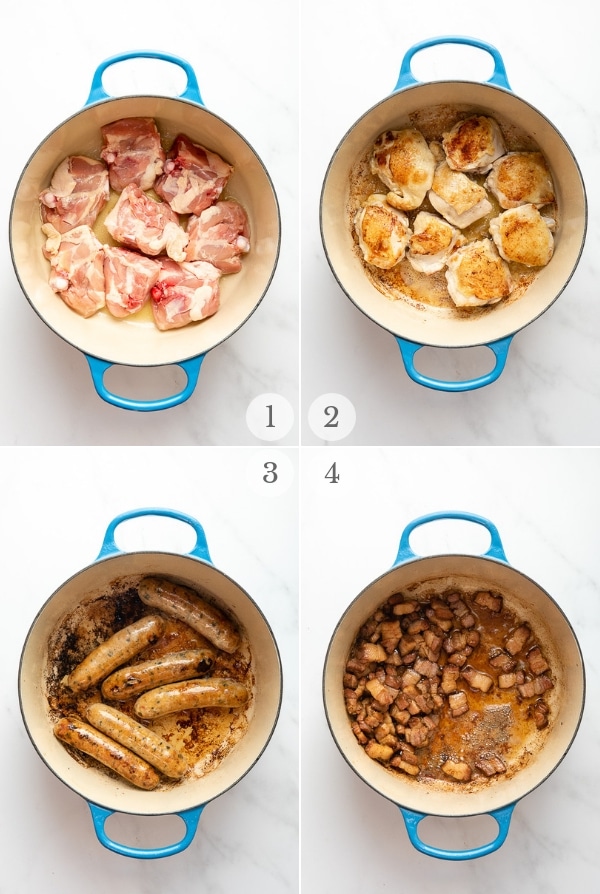 The chicken thighs are placed skin down in the pan to cook for 8 minutes (photo 1 above); then flipped with tongs and cooked 3 minutes longer then removed from the pan (photo 2).

The sausages are added to the pan and browned for 3-4 minutes (total) then removed from the pan. (photo 3)

The bacon is sauted just to render the fat (‘render the fat’ means to allow the fat to begin to melt and liquify); 3 minutes, then removed from the pan with a slotted spoon.(photo 4) 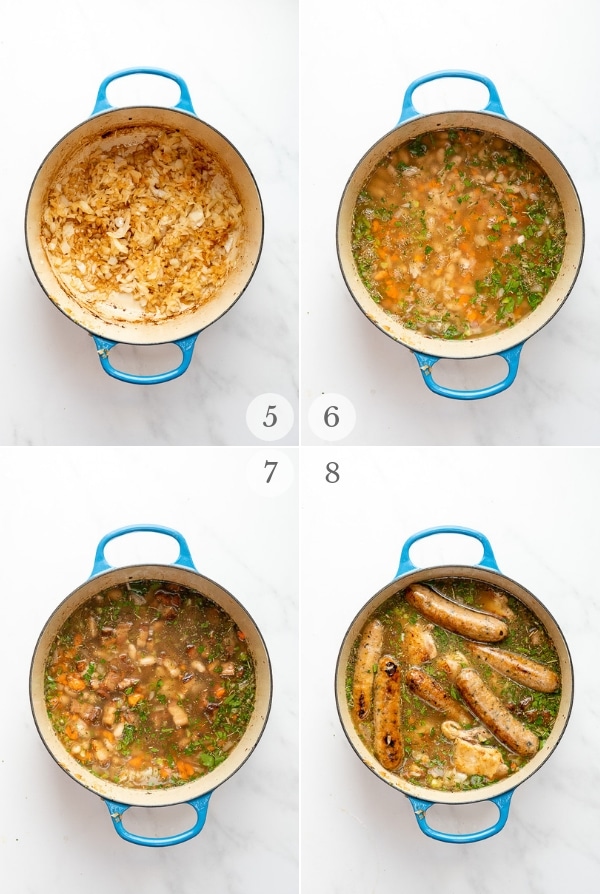 Most of the fat is then removed from the pan and onion sauteed (photo 5).

The other vegetables,herbs, cannellini beans and chicken stock are added to the pan (photo 6), followed by the bacon (photo 7), chicken and sausages (photo 8). 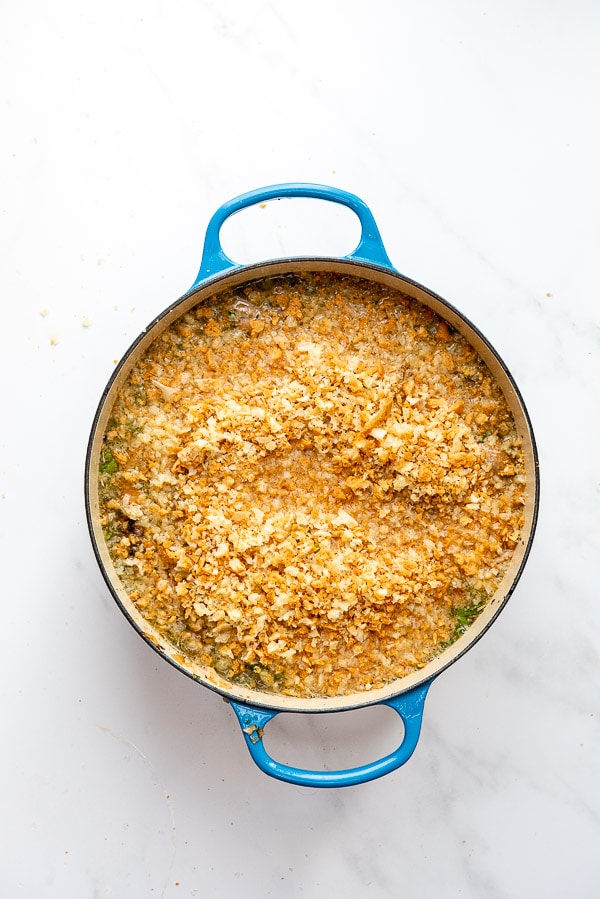 Homemade soft breadcrumbs (see Recipe Notes) are tossed with garlic and added to the top of the stew (this will help thicken the cassoulet too). NOTE: regular or gluten-free bread may be used.

The recipe is baked for 1 hour 15 minutes. Periodic pressing of the breadcrumb topping into the cooking liquid of the stew while cooking helps thickening.

Finally it is broiled to crisp the top. The sausages are cut into 2-inch lengths, added back and it is ready! Enjoy with a glass of white wine!

How to Make Homemade Bread Crumbs

Whether making soft breadcrumbs as used in this recipe, or hard breadcrumbs used in many recipes such as meatloaf, meatballs or for breading, they are very easy to make at home.

I use my mini chopper for everything. It’s essentially a mini food processor so great for smaller jobs and easy to clean up (pop the vessel in the dishwasher).

To make homemade breadcrumbs, fresh bread is used for this cassoulet recipe. I use baguettes (gluten-free for me but regular work if you aren’t gluten-free). 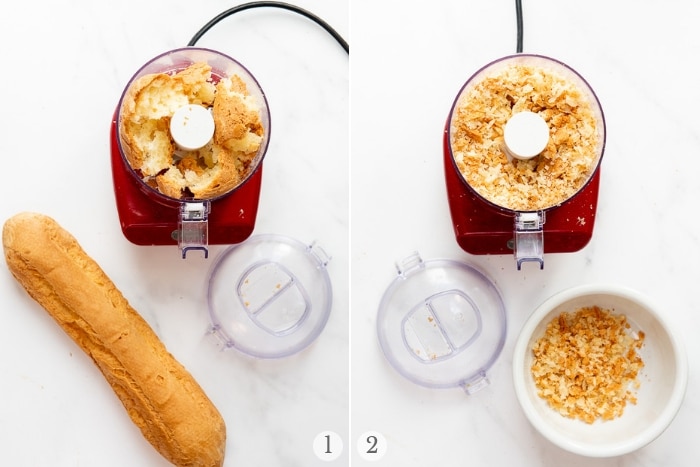 If making hard breadcrumbs for a different recipe, toast the bread first in a toaster or under the broiler. Let it sit out until it cools and any moisture has dissapated. Then follow these same steps. 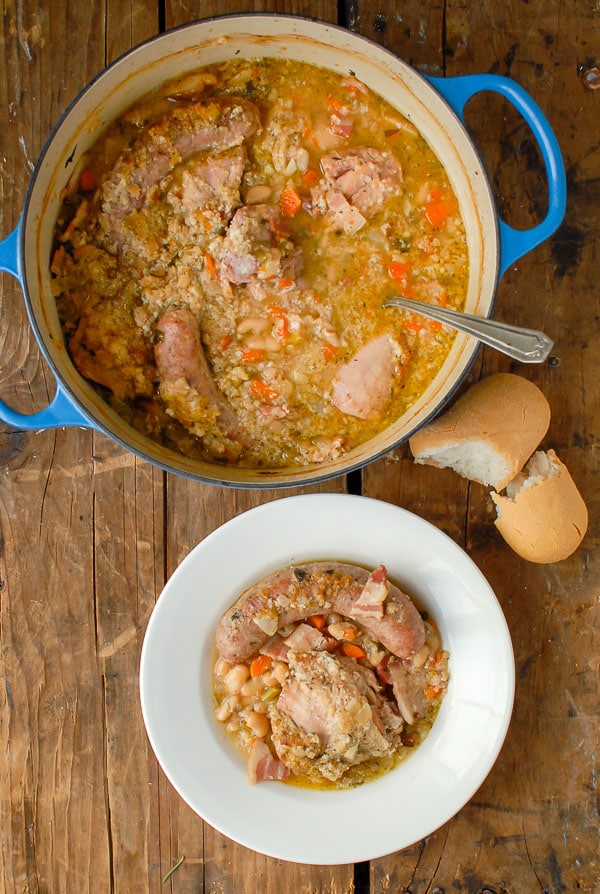 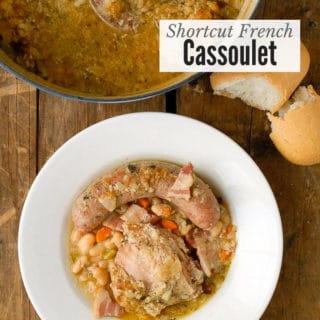 *Duck fat may be purchased from gourmet or specialty food stores, or online (I bought mine from Amazon.com). It lasts a long time and can be a great substitute for sautéing to add different flavor. **I suggest checking with a butcher for garlic sausage (I found some at Whole Foods in the butcher department). If they are not available a kielbasa may be substituted or see what you butcher suggests. +To make Soft Breadcrumbs place chunks of baguette in food processor, chopper or strong blender and pulse until they form large crumbs. To make the cooking even faster, the vegetables may be prepared the day prior to cooking and stored sealed in the refrigerator until cooking is ready to begin!