Home » Recipes » Condiments and Sauces » How to Make Homemade Vinegar 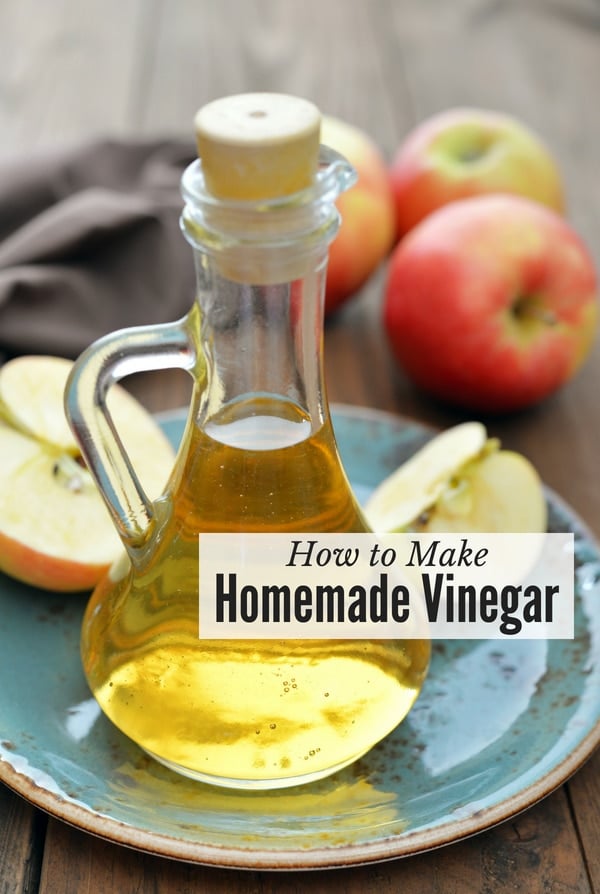 Most pantries are stocked with a variety of vinegar types but did you know you can make your own vinegar?

This guide on How to Make Vinegar shares details of making both Red Wine Vinegar and Apple Cider Vinegar.

It’s more delicious than store-bought vinegar and is easy with some specifics you need to know to be successful.

Vinegar is easy to find at most stores and inexpensive to buy. So why make it yourself? Because the taste is recognizably better than purchased vinegar.

Plus, YOU made it. Isn’t that the best part? Some say it’s a great way to use up wine which does not get consumed (that seems an oxymoron to me; ‘wine’ ‘not consumed’).

Vinegar making can be done continuously so a fresh supply is always available. 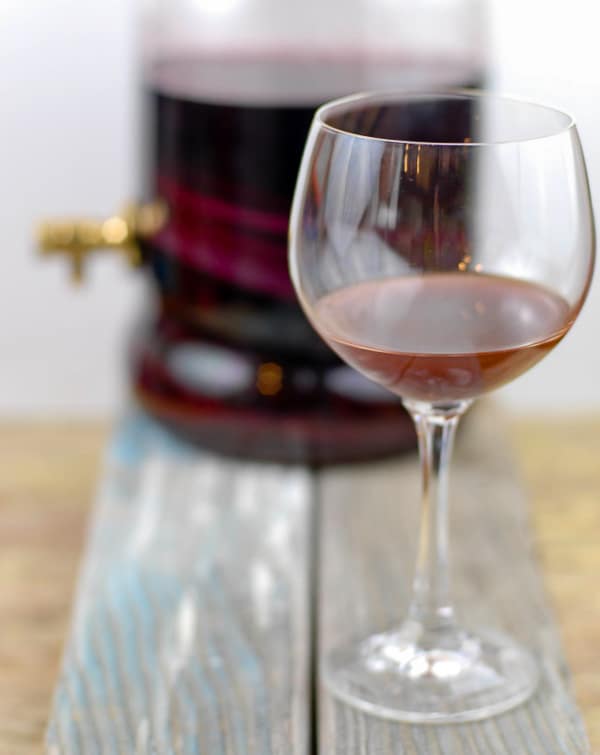 Vinegar Making Supplies: Everything You’ll Need to Make Your Own Vinegar

How to Make Red Wine Vinegar

Can Any Wine be Used?

Sulfite-free organic wine is required for making red wine vinegar. Sulfites can impede the conversion process so low or no sulfite wine should be used. 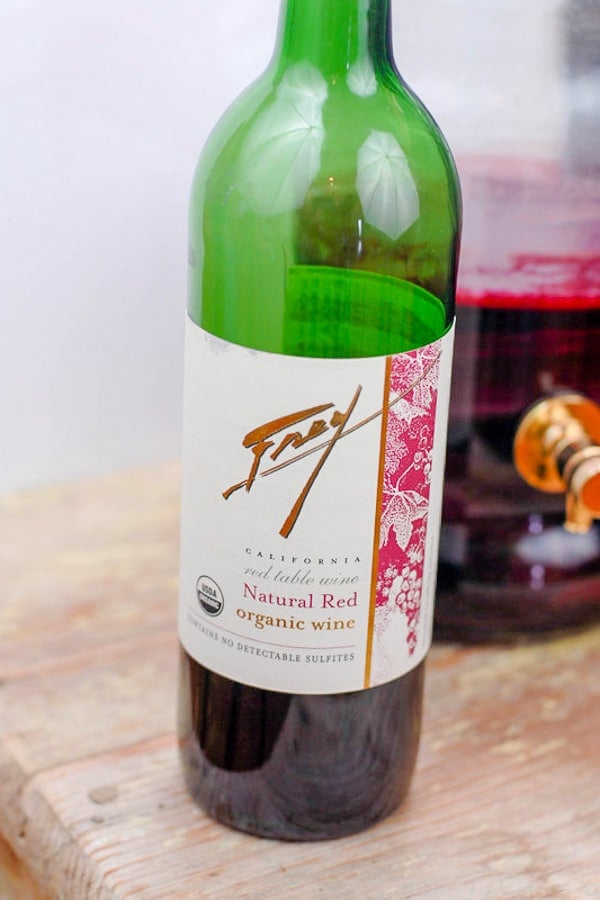 The wine I have used for my red wine vinegar.

How to Make Apple Cider Vinegar

Can it be made with regular Apple Cider?

Hard apple cider is used to make apple cider vinegar. The alcohol content is needed for the vinegar conversion. 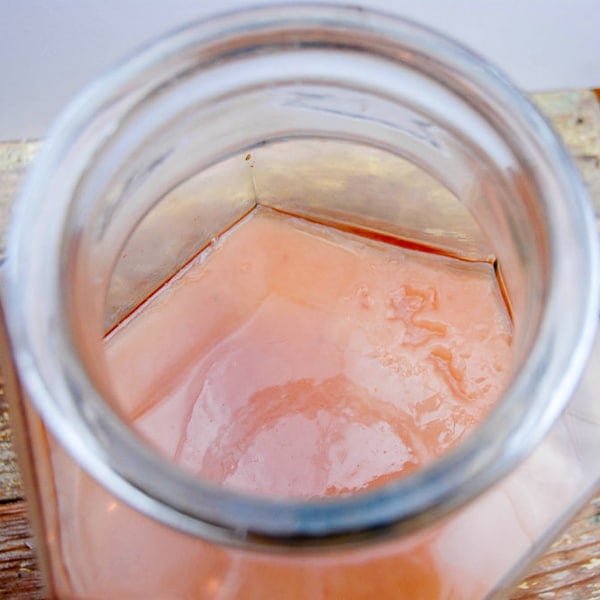 This name has always evoked memories of Sigourney Weaver in the movie Alien when she confronts ‘THE MOTHER’, the oozy, dripping, teeth-gnashing alien giant. A vinegar mother isn’t much prettier.

What Is a ‘Vinegar Mother’?

The vinegar mother is a mass of bacteria which serves to convert the liquid into vinegar. Also called a Scoby, which is an acronym for “Symbiotic Culture Of Bacteria and Yeast”.

When you begin to make vinegar, the vinegar mother is an innocuous mucoidal blob which you put in the jar with the liquid.

PRO TIP: You’ll need a vinegar type-specific mother; they are different depending on whether you are making apple cider vinegar, red wine vinegar or white wine vinegar.

Over time the mother grows to make an opaque thin layer on the top of the liquid. Each time you add more liquid (referred to as ‘feeding the mother’) it usually dislodges the vinegar mother and a new one will grow (see photo below).

When your vinegar batch is mature, you can even give part of your vinegar mother to a friend with some of the vinegar and they can start a batch of their own. I’ve heard tell of people (all of them in France) who have been working with the same vinegar mother for 20 years. 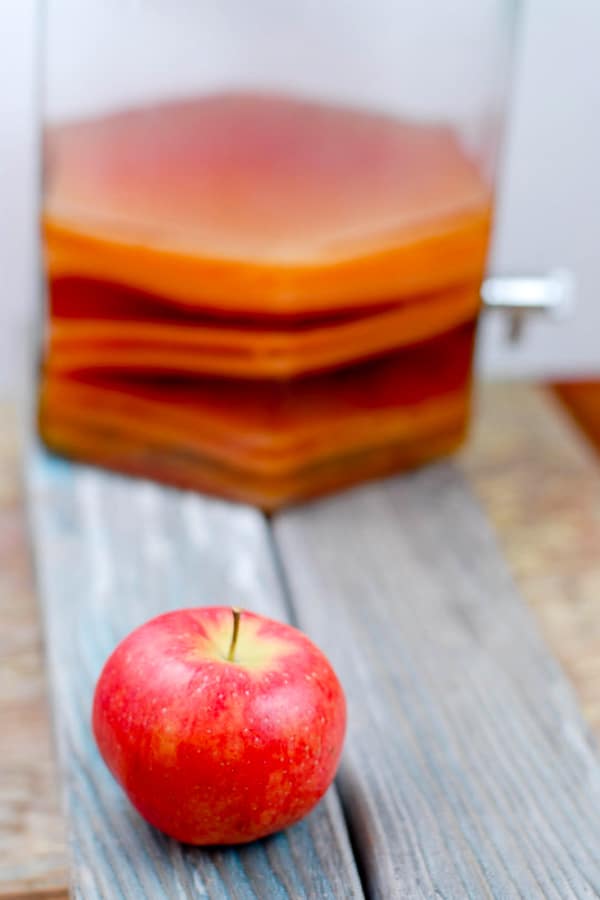 How to Make Vinegar at Home – Step-by-Step

Making vinegar at home is basically the same whether you want to know how to make apple cider vinegar or how to make red wine vinegar. They share similar steps using different liquids.

A personal lesson about the container placement:

I started mine in December when it’s cold in Colorado. I put it up on the highest shelf in my laundry room which was good for warmth.

I wrapped a hand towel around the jar and fastened it with clips to keep it dark (a great TRICK when not having a dark area for the vinegar making).

It was too close to the ceiling however and was not getting enough air circulation.

It began to smell like acetone (which I’ve also read is part of the process but not having had that happen since I’d say it’s not good). I brought the jars down lower and they recovered fine. The cheesecloth, which you’ll put on the top of the jar opening, allows circulation and keeps things (fruit flies) out.

Step 2: Sterilize your jar with hot water (not boiling) and drain

Check that the spigot is functioning properly before beginning.  Because the conversion process is ongoing, you’ll be ‘feeding the mother’ (adding additional liquid to convert to vinegar) regularly.

The converted vinegar will be at the bottom of the jar and the liquid in process of converting on the top. The spigot allows you to drain completed vinegar out the bottom for use and not disrupt the vinegar mother(s) by pouring out the top of the jar.

The vinegar mother container will have instructions about the initial liquid to add.

For the red wine vinegar, I added 16 ounces of organic sulfite free (that’s the hook; you want to use low or no sulfite wine as sulfites can impede the conversion process) red wine combined with 8 ounces of water and pour it into the jar (too high an alcohol content can also impede the process so it needs to be diluted). Then add the red wine vinegar mother. 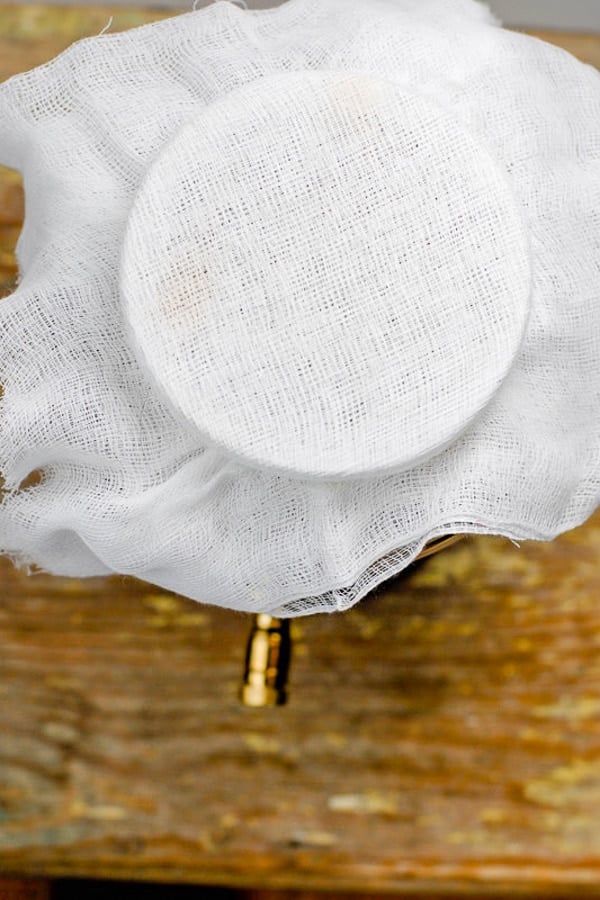 The final step, for either vinegar type, put the cheesecloth (I recommend 2-3 layers) securing it with rubber bands.

It needs to be enough to disallow fruit flies from entering the vinegar container but not so much it blocks air circulation (see more below in Troubleshooting).

Until the vinegar begins to convert you want to hold off on regular feedings so as to not overwhelm the mother; which can cause the vinegar production to slow down.

Also, I added my liquid with a funnel with a bend in the lower tube trying to direct the liquid to run down the side of the jar so as to not disrupt the mother. 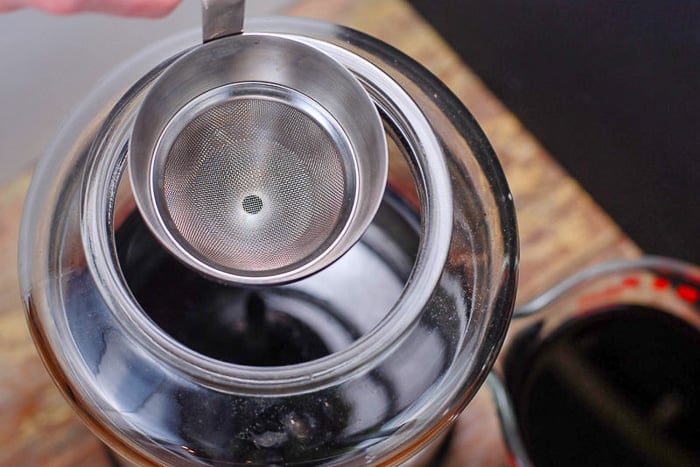 When ‘feeding the mother’ I use a funnel to direct the liquid to run down the inside of the jar if possible so as to not dislodge the vinegar mother (if that happens however, a new one will grow) 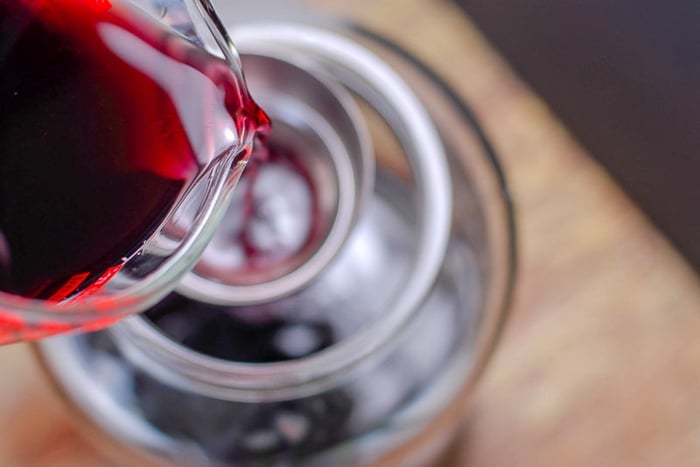 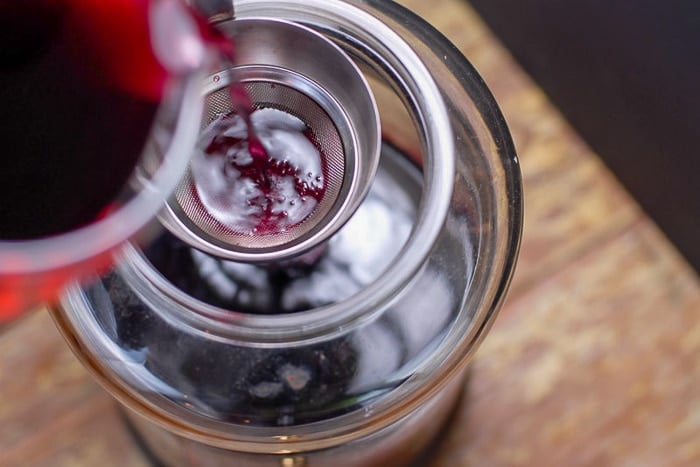 I’ll include my notes that show my intervals of adding liquid, though I added more liquid to mine about once a month.

Continue to feed it the same amount you started with each time until you are getting vinegar (or at a minimum ensure the wine is always diluted with half the amount of water).

I was very regimented at first but do it when I think of it now that I have a good size batch to draw from. 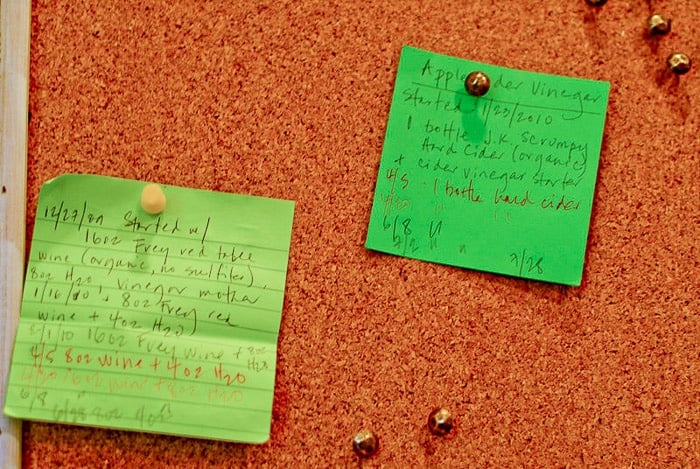 My notes of when I added more liquid to the red wine vinegar (on the left) and apple cider vinegar (on the right). Liquid is added aproximately once a month under normal temperature conditions.

When Will It be Vinegar?

The full conversion process takes about 3 months depending on the conditions where you keep your vinegar.

The warmer it is the faster it converts. You don’t want it overly hot (like in a boiling garage in the middle of the summer) for you can kill the mother.

How Do You Know the Vinegar is Done?

By tasting it. You will also smell the vinegar. It’s not very strong but notable.

The vinegar may be left in the container and the amount needed drawn via the spigot per use. Some people prefer to drain a full batch, pasteurize it by heating it and bottling it.

You can infuse it with herbs as well (in a container separate from the main batch).

Recipes like Homemade Cranberry Vinegar which uses apple cider vinegar (this recipe also comes with free printable gift tags when giving it as gifts) are another fun way to use your homemade vinegar. 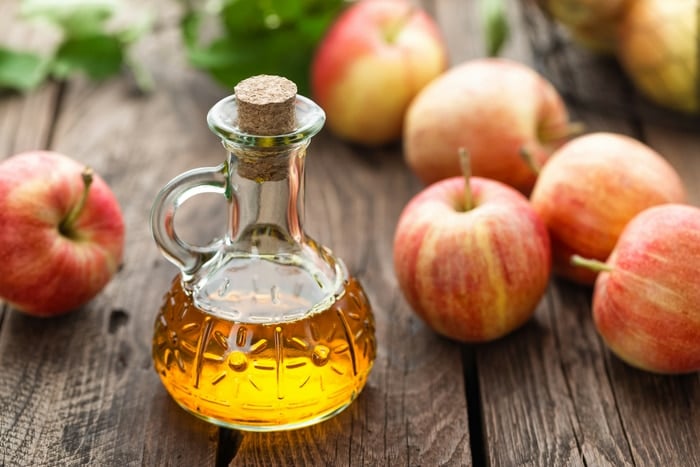 Depending on time of year and where you live, fruit flies may come to visit. They love vinegar.

SOLUTION: Three layers of cheesecloth, tightly secured to the jar opening will keep them out. I had a mass visitation this past fall and resorted to putting out small bowls with a bit of vinegar and a drop of dish soap in them which did the trick.

While the process is beginning really pay attention to the conditions where you are keeping the vinegar and the smell. If you get an acetone smell, check to ensure you are getting enough air circulation.

SOLUTION: Gently move the vinegar container to an area with better air circulation. Moving may dislodge the vinegar mother but another one will grow.

I’m not sure this is really an issue but something to watch and prompt feeding the vinegar mother. I noted when decloaking my red wine vinegar for photos a ‘recession line’ where I noted evaporation.

I had not added liquid for awhile as it was winter though it was dry and the heat had been running raising the room temperature.

SOLUTION: Keep a watch on the liquid line and add more liquid if needed. 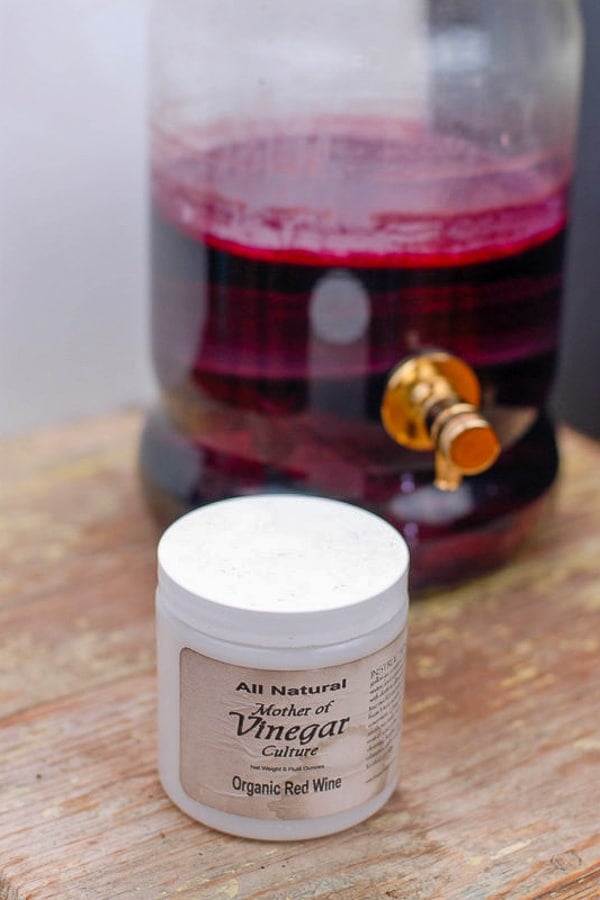 Vinegar Making Supplies: WHERE TO BUY

The Vinegar Mother (or ‘starter’)

Beer brewing and wine making shops usually sell them too. Since originally writing this post I’ve seen them in natural food stores too.

My first vinegar making jar was a gift stemming from reading an article in Savuer. It is from an infusion jar maker and was about $50.

There are many glass jars that work well for this purpose online too. I like this 1-gallon glass jar from Amazon.com because it is smaller yet still has plenty of room for making vinegar batches (often the jars are multiple gallon sizes which is far more volume than is needed).

I prefer metal spigots such as this metal spigot , which can be retrofitted onto a glass jar that might be originally fitted with a plastic spigot.

Brick and mortar shopping: I purchased a jar at World Market for $19 (Pier 1 usually has them too) and it has served me well (note: this is the same jar now available via the link to Amazon.com which ships free via Amazon Prime; often these jars are considered ‘seasonal’ in physical stores and might not be available all year round).

To check them in my photos the more expensive jar has the red wine vinegar in it and the World Market jar has the apple cider vinegar. Both come with glass lids which I don’t use for vinegar making. 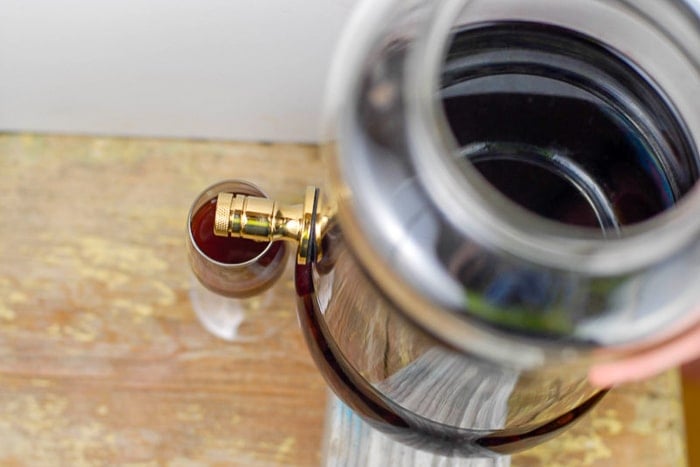 The guys at Northampton Beer and Wine told me that once the vinegar mother has dropped from the top of the batch they are not as potent but also do no harm (if they get in the way of your spigot draining vinegar just take them out but leave the top active mother).

If you were to want to start another batch you can cut part of your active vinegar mother (the uppermost one in the jar) along with some of the vinegar liquid and start it in another jar or give it to a friend.

The vinegar mother you use part of will regenerate or another will form in your batch. They also shared in many cultures the inactive mothers are cut up in salads or other dishes for their believed medicinal properties.

15 Salad Dressing Recipes to Get You Excited About Salad Again 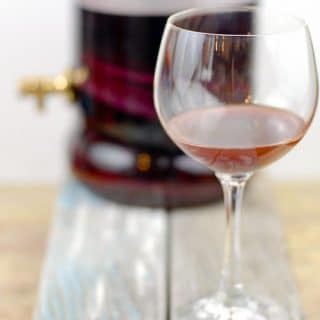