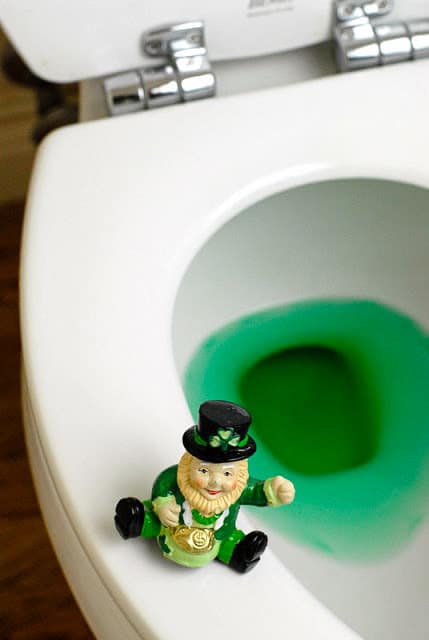 We have a leprechaun that comes to our house on St. Patrick’s Day. No kidding. The visit is not lost on us as he turns out house on its ear. Chairs stacked to the ceiling willy nilly like the ‘redecorating’ scene in the movie Poltergeist. Our milk is always turned green, as is our toilet water. He even drew a face on a spaghetti squash one year.

Having Irish roots in our family, we always hail the holiday with some homemade corned beef, potatoes, Guinness and a watch of ‘The Commitments’ in a good year. I do not wear ‘Kiss Me I’m Irish’ t-shirts, shamrock sunglasses five times the size of my head or green underwear as an insurance policy lest someone felt inclined to give me a pinch.I learned years ago from Irish friends living in Ireland these madcap shenanigans and the drunken benders Americans go on in the name of the holiday is totally off the mark. These boys and girls will throw down a pint as nimbly as the next person but not on account of St. Patrick.

I always find holiday mutations in other countries fascinating and enlisted the help of an acclaimed Irish blogger in Dublin, Aoife (pronounced EE-fah) from The Daily Spud, to set the record straight. As you can tell from her blog title, she writes about, well, potatoes (among many other fabulous topics). She’s won many an award on the other side of the pond and has a blog that should not be missed. It truly is an honor to have some of her time, wit and wisdom as an ode to St. Patrick and in the effort to educate any tempted by green beer feeling they are toasting the Motherland.

Note: Aoife and I wrote our parts of this separately, without knowing what the other would be saying. When married together, I found ‘she schooled me’ and I’ll be rethinking my nostalgic celebratory menu (though we both agree ‘The Commitments’ is a good watch!)

It’s the day when everybody, no matter who they are or where they come from, is a little bit Irish. Perhaps you’ll mark your honorary Irishness by drinking green beer, or perhaps you’ll eat corned beef and cabbage – but what, you might wonder, is Paddy’s Day like if you’re in Ireland and 100% Irish to begin with?

The short answer, I have to tell you, is that St. Patrick’s Day in Ireland is not especially green beered or corned beefy. In fact – and I’ll try to break this to you gently – we don’t really go in for corned beef and cabbage at all. Sorry. That combination is much more Irish-American than Irish, while bacon and cabbage is closer to the native mark. On the beer front, Paddy’s Day here in Ireland may well involve drinking Guinness, and in great quantities by some, but, hey, for better or worse, that’s true for the other 364 days of the year too.

The occasion may also involve wearing real, actual shamrock. This came as a shock to my friend Tim, a Boulder native, on his first Paddy’s Day in Ireland. “They’re wearing weeds!” was his reaction when he saw some older Dubliners wearing clumps of freshly dug shamrock pinned to their lapels. Whilst the wearing of the shamrock is probably not as prevalent now as it once was, I distinctly recall, as a child, that the morning of St Patrick’s Day would involve a trip, before mass, out to the back field to locate and dig the requisite greenery.

And that wasn’t the only thing that might involve digging. St. Patrick’s Day was, in some quarters at least, the traditional day for getting your crop of spuds into the ground. So not only were you likely to eat spuds on Paddy’s Day (as you would on most other days of the year), you might well spend at least part of it planting them too.

Nowadays, though, we don’t eat quite as many spuds as we used to and you’ll find a plethora of shamrock-shaped merchandise which you can don while watching your local parade go past. The biggest parade, of course, takes place in Dublin, but even though the Dublin parade has become quite a spectacle in recent years, it’s still nothing compared to the likes of the New York event. And that’s the thing. St. Patrick’s Day is a real focus for the Irish abroad and, in some ways, has always been a bigger event in Irish America than in Ireland. We have imported some of that celebratory glitz back here over time, but the fact remains that, when it comes to St. Patrick’s Day, the faraway Irish are often greener.