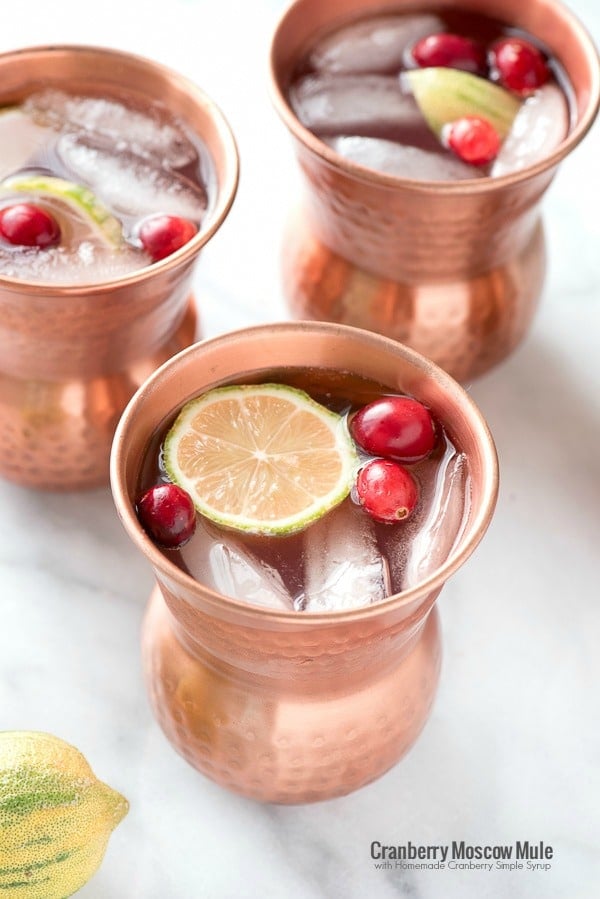 It’s funny how the preparations for Christmas feel like a car speeding toward a road barrier, screeching the tires in a feverish attempt to stop just in the nick of time. I consider this year a success for though my gift wrapping did not start until early Christmas Eve morning, I was finished by noon leaving much of the day to enjoy time with my family.

Unlike those I noted sharing photos on Facebook of their children frolicking in summer clothing they’d dug out of stored boxes in the garage due to sweltering heat, we snuggled up indoors, playing games and watching movies as the mercury dropped and snow fell outside. It was idyllic and what Christmas feels like it should be. 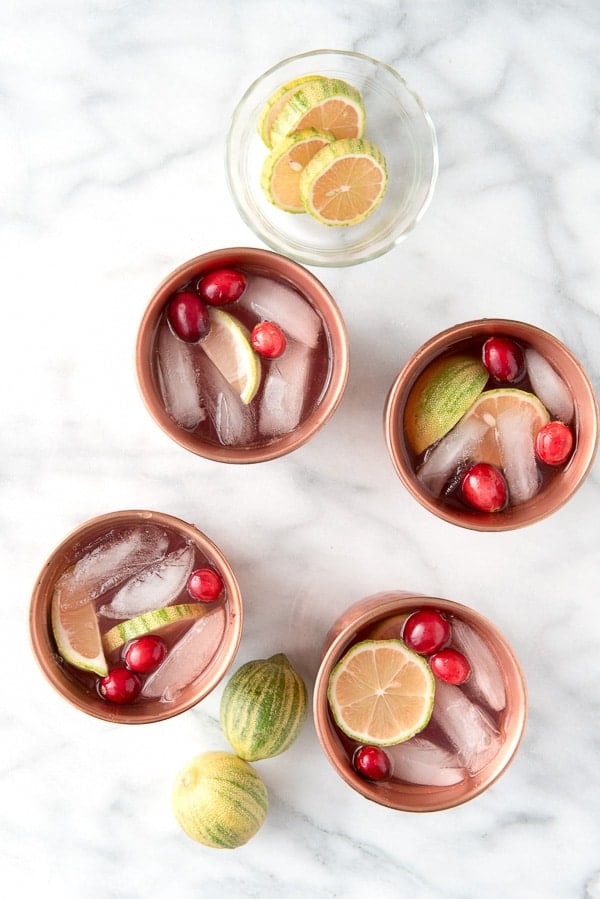 I wanted to share what we’ve been sipping over the holidays however with a warning: it may very well become your new favorite cocktail. Cranberry Moscow Mules with Homemade Cranberry Simple Syrup. Fizzy, gingery with a light taste of lime and cranberry. The ginger speaks to the season and adds a warmth to this on-the-rocks sipper.

I think my first real notice of a Moscow Mule cocktail was when watching Oprah. She and her best friend Gayle had gone on a camping trip to Yosemite in California. And unlike any camping trips I’d taken they brought all the ingredients, including the copper mugs, to make Moscow Mules, Oprah’s favorite cocktail at the time.

It’s a notable libation as the only cocktail I know of that is served in a copper vessel. I was curious about the exotic history leading to this visually tell-tale drink. Ironically it seems to have nothing to do with Moscow, or mules, but rather a deal struck in the 1940’s between a struggling vodka maker (purportedly newly acquired Smirnoff) and an equally challenged ginger beer maker who by chance met at a bar and struck a partnership to improve their company standings together. 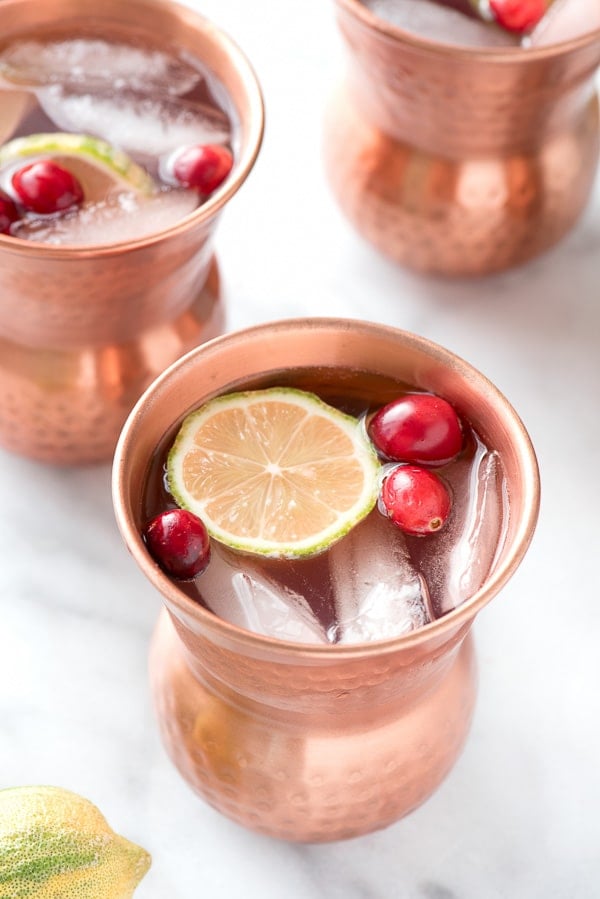 However the cocktail was born, I’m glad it was. It’s refreshing and easy to drink with a strong component of ginger beer (a non-alcoholic carbonated ginger drink). Ginger also eases stomach distress which with the rich foods and often overeating at this time of year is a perk too.

I modified the traditional cocktail with some Homemade Cranberry Simple Syrup. It adds a light cranberry flavor to the cocktail and can be used in other cocktails as well.

This guide on How to Make Simple Syrup gives lots of great information and easy recipes! The simple syrup for these Cranberry Moscow Mules is also included in the recipe below. 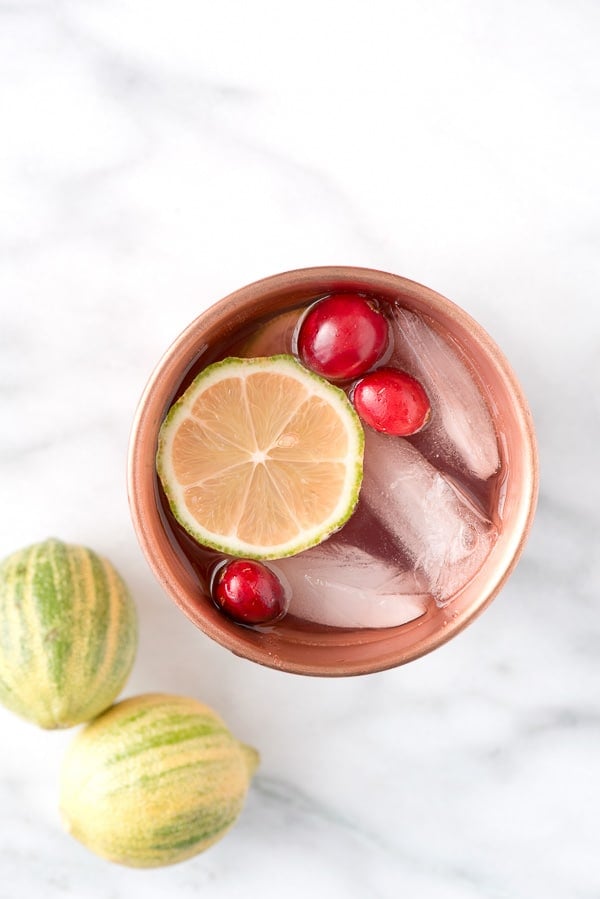 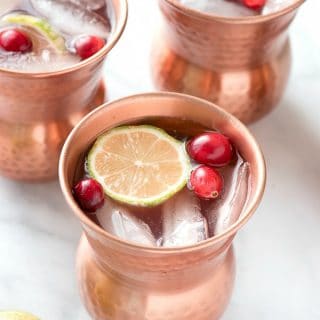 The traditional gingery Moscow Mule is changed up for the winter season with the addition of Homemade Cranberry Simple Syrup. The syrup is very simple to make and works beautifully in many cocktails. The recipe ingredients are for 1 cocktail but can be multiplied by the number of drinks needed keeping the proportions the same.
5 from 2 votes
Print Save Recipe Recipe Saved! Pin Rate
Course: Cocktail
Cuisine: American
Keyword: cranberry moscow mule
Prep Time: 5 minutes
Cook Time: 5 minutes
Total Time: 1 hour 10 minutes
Servings: 1 cocktail (additional cocktails may be created keeping ingredient proportions that same) and 10 ounces Cranberry Simple Syrup
Calories: 216kcal
Author: Toni Dash
Prevent your screen from going dark

Ingredients for a Cranberry Moscow Mule (per cocktail):