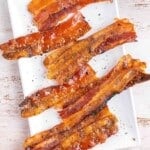 Whether you call it Pig Candy or Bacon Candy, this easy candied bacon recipe is a fantastic treat. Sweet-and-salty bacon is so easy to make. Great for breakfast, in loads of other dishes or for gift giving.

Sunday Brunch has never tasted so good! The first time you try candied bacon with the sweetness of the brown sugar and the crackly crust you’ll be hooked.

Candy bacon adds extra flavor with the perfect combination of sweet, salty, peppery and a touch of cinnamon. It’s great by itself but delicious in other dishes where you’d use regular bacon.

It’s a fast and unexpected recipe for a perfect addition to your next party, brunch or holiday get together.

1 pound sliced bacon. You can make this recipe with either regular bacon or thick-cut bacon. Regular bacon has about 16 slices in a pound and will cook in 20 minutes.

Thick cut can be 1/8-inch thick to 1/4-inch thick and will take approximately up to double the cooking time (with around 10 slices in a package). The bacon can be cooked in whole slices or cut in half (across the middle) to make shorter strips.

Freshly ground black pepper. We recommend around 3/4-teaspoon depending on whether the bacon you choose is seasoned. If it is use less pepper.

Light brown sugar. This caramelized on the bacon as it cooks and gives it a wonderful sweet-meets-salty flavor. This will also help crisp it.

How to make Candied Bacon

In a small bowl combine the brown sugar, black pepper and cinnamon. Whisk to fully combine.

Preheat the oven to 375 degrees F. Line a large rimmed baking sheet with aluminum foil (for easier cleanup). And place an oven-safe wire rack in the pan for the bacon. Lightly spray the rack with nonstick spray.

Place bacon strips side by side in a single layer on the rack without overlapping them.

Sprinkle the brown sugar mixture over the top of the bacon slices to cover them.

Place the foil-lined baking sheet (or sheets) of bacon in the middle of the oven.

For regular bacon: Bake for 15-20 minutes or until the fat has rendered, the sugar caramelized and the bacon has begun to crisp.

For thick cut bacon: monitor the bacon until the fat has rendered, sugar caramelized the bacon has begun to crisp. This may take 30 minutes depending on the thickness and type of bacon used.

Remove from the oven and allow the strips of bacon to cool on the rack or on a piece of parchment paper or paper towels for 5 minutes. It will become more crisp as it cools.

The thickness of your bacon determines baking time. Most candied bacon recipes use thick-cut bacon slices but it’s great no matter what type of bacon you use. It’s important to monitor while cooking to see that the sugar has caramelized and that the crispy edges don’t burn.

The thicker the bacon the longer it will need to cook but usually not more than 30 minutes unless it’s very thick.

Check on the bacon while cooking. Because all bacon cooks slightly differently check on it to be sure it does not burn from over cooking.

Also called Million Dollar Bacon, is made in the same way with red pepper flakes added for a sweet, salty and spicy flavor! Some versions add 1 teaspoon of cayenne pepper instead of chili pepper flakes.

Bacon lore has it that this version was created by a San Francisco restaurant, Sweet Maple and decided to call it this on their menu. Their version slow cooks the extra thick cut bacon with brown sugar and an assortment of peppers to a jerky type consistency.

How to Eat it

The bacon can be eaten as you would regular bacon for breakfast or use it on or with:

Store in an airtight container in the refrigerator for up to 4 days. The bacon will lose its crispness but will still taste great.

Do I need to add the sugar mixture to both sides of the bacon?

No. Only the top side needs the seasoning to crisp up and caramelize the sugar.

Do I need to turn the bacon over while cooking?

No! Cooking on the wire rack allows air circulation to both sides of the bacon cook while in the oven.

Do I really need to cook it on a rack?

For it to cook fully and crisp up, you do. If cooked directly on the pan the bottom side won’t cook in the same way and the bacon will be soft. 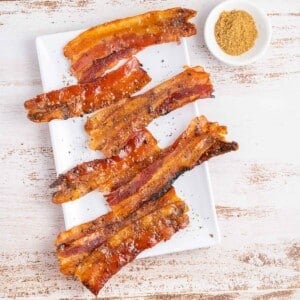 Cooking time will vary dependent on the thickness of the bacon used. Millionaire’s Bacon Also called Million Dollar Bacon, is made in the same way with red pepper flakes added for a sweet, salty and spicy flavor! Add 1 -1 1/2 teaspoons red pepper flakes to the seasoning. Some versions add 1 teaspoon of cayenne pepper instead of chili pepper flakes. How to store Store in an airtight container in the refrigerator for up to 4 days. The bacon will lose its crispness but will still taste great.