Chilly temperatures call for rustic soups and stews. This classic Slow Cooker Split Pea and Ham Soup is just the ticket and a great way to use up holiday ham!

As we roll into the new year I wanted to share a delicious, comfort food soup that’s a snap in the slow cooker: Slow Cooker Split Pea and Ham Soup. It’s a perfect way to use up holiday ham AND the ham bone. The ingredients are simple and whole, AND the soup so much flavor!

We had made Orange-Bourbon Glazed Bone-In Spiral Cut Ham  over the holidays and I had forgotten about the ham bone which we’d put in a second refrigerator I rarely check. My husband migrated it up the kitchen refrigerator one day before we were headed out for the latest Star Wars move (did you see it? What did you think?). I put all the ingredients into the slow cooker and was so glad I did! By the time we got home everyone was famished and what we had planned for dinner was a few hours away.

This sort of soup is really where slow cooker recipes shine. They slowly develop flavors over a longer period of time needing no involvement from you. The classic basis for soup is onion, carrot and celery and they form such a delicious broth. When stirred after cooking the split peas melt into a thick creamy texture. It’s the type of soup that takes the chill off the day!

If you want to make this and don’t happen to have a ham bone laying around, ham hocks may be substituted. Use 2-3 ham hocks which are easily found through the butcher at your favorite super market if they aren’t already packaged in the meat section or freezer.

To get that chunky ham that is so good in soup you can request from the deli department to get ham slices that are ¼-inch or ½-inch thick and then cut them into nice cube before making the soup. This is definitely the type of soup you’ll want to make all winter long!

For those preferring a more traditional cooking method, this Split Pea Soup with Red Wine and Ham is another family favorite and is cooked on the stove top.

This classic comfort soup is made even easier by preparing it in a slow cooker. Hours of simmering create a rich depth of flavor in this Slow Cooker Split Pea and Ham Soup recipe with no effort from you!

If you love your Instant Pot this Instant Pot Ham recipe is a great way to whip up some ham when you want it. 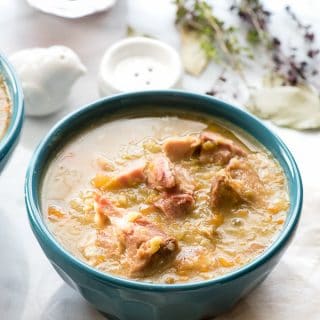