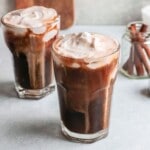 Homemade Pumpkin Cream Cold Brew is a summer-meets-fall iced coffee drink loaded with pumpkin spice flavor. You can grab the original at Starbucks stores but you’ll love this homemade pumpkin coffee drink too! Try it with one of our easy Pumpkin Cookies.

It’s the time of year when pumpkin spice becomes everyone’s favorite flavor! You aren’t quite ready for pumpkin lattes but a little hint at all things fall (the best time of year) is welcome!

This smooth cold brew is the perfect pumpkin spice drink. The pumpkin cream ingredients are easy to combine into a fall tasting foamy topper just like the original.

Use your own cold brew recipe or store bought. Anyway you make it it’s delish.

This is the perfect drink for the shoulder season. Still hot during the day but when people are starting to crave a Pumpkin Spice Latte.

Starbucks pumpkin cream cold brew is the best of both worlds. Refreshing when it’s hot but it tastes like fall!

The original drink is made with Starbuck’s cold brew, vanilla syrup and a lightly pumpkin flavored foam on top of the cold brew.

What is Cold Brew?

Think iced coffee. There is a special method for making cold brew to develop rich flavor. It uses coarsely ground coffee beans, which soak with water for 8-16 hours.

The mixture is then strained with a fine mesh strainer or sieve to make a cold brew concentrate. That is mixed with water for iced coffee or cold brew.

Cold brew tends to be more substantial in flavor versus regular iced coffee which can have a watered down coffee flavor.

Cold brew. Use homemade cold brew or store bought. There are many brands who make and sell it if you don’t feel like making your own.

Granulated sugar. This will be used to make vanilla simple syrup to sweeten the cold brew and the cold foam.

Vanilla extract. Used in the simple syrup to give a nice vanilla flavor.

Heavy whipping cream. Heavy cream will be whipped for the cold foam topping. Use cold cream from a carton (not prepared whipping cream).

Pumpkin pie spice. Used for a sprinkle on top of the prepared drink.

Brown sugar. For a more caramel flavor for the vanilla simple syrup use brown sugar instead.

Simple syrup is fast and easy to make. It’s a sweetener often used in cocktails. Because it’s a liquid it mixes perfectly into drinks without leaving any undissolved sugar.

Use it for this favorite Starbucks drink or in other drinks for a sweet vanilla flavor.

Though the cold foam uses heavy whipping cream it is not prepared to be perky and stiff like traditional whipped cream.

It’s whipped or frothed to what I would call a slouchy consistency. It has a bit of lift but not an enthusiastic amount.

To whip the cold foam use a milk frother, whisk or immersion (stick) blender. We don’t recommend a hand mixer as that will tend to make more of a whipped cream and you just want a foamy topping.

Combine the water and sugar in a small saucepan over medium heat. Simmer, stirring, to dissolve the sugar. Remove from heat.

Cool and stir in the vanilla extract.

Whip the mixture with a whisk, milk frother or immersion blender until frothy (photo 2 -it will not create peaks as with regular whipping cream).

Pour cold brew into a glass with ice. Sweeten to taste with the vanilla simple syrup.

Spoon some of the pumpkin cream cold foam on top. Sprinkle with pumpkin pie spice as desired.

Can alternative milk or non-dairy milk be used?

To make your own pumpkin cream that most closely resembles Starbucks cold brew the fat in heavy whipping cream is needed. If you don’t care if it’s frothy in the same way use any type of milk you love. Skim milk, oat milk, almond milk, whole milk can all be used.

Can I use maple syrup to sweeten Pumpkin Cream cold brew coffee?

You can. We use homemade vanilla simple syrup to replicate the vanilla syrup in the original Starbucks drink. Also liquid sweeteners mix into drinks better than white sugar which has to dissolve. If you prefer maple syrup use it! 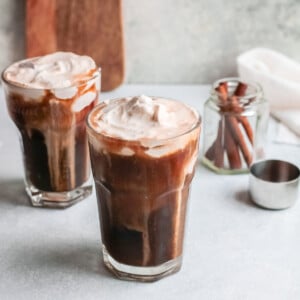 Note on Calories The nutritional calculation assumes use of the entire batch of vanilla simple syrup across the four cold brew servings. If less is used the calories per serving will be reduced. Pro Tip Start with chilled heavy whipping cream and a chilled bowl if possible.