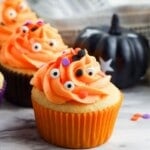 These easy Halloween Cupcakes have a fun surprise! When taking a bite orange flavored stripes are revealed! Topped with a delicious buttercream frosting and Halloween sprinkles they are always a favorite of the Halloween desserts!

If you are looking for easy Halloween cupcake ideas for your next Halloween party or school party, you’ll love these!

Rather than spooky Halloween cupcakes these cute cupcakes grab everyone’s attention. They are covered with fun sprinkles and edible candy eyes.

We also include some great shortcuts if you are running short on time. However you make them they will delight Halloween party guests!

These delicious cupcakes will be a perfect addition to your Halloween recipes.

What is poke cake?

After a cake or cupcakes are baked and cooled, holes are poked into the top and a dense gelatin mixture is spooned over the top. The cupcakes (or cake) are then chilled for the gelatin to set in the refrigerator.

When the cupcakes are cut into stripes of the gelatin can be seen and tasted. It’s a fun easy method to add a surprise and color for any holiday or occasion. No one will know until they take a bite!

White cake mix. One box is needed. If preferred a yellow cake mix can be used instead. You’ll need all the ingredients called for on the box mix. For making a gluten-free version see the section below.

Orange jello. You’ll need 2 3-ounce boxes. One will be used for the gelatin spooned onto the cupcakes. A partial amount will be used in the frosting from the second package.

Unsalted butter. Be sure to start with room temperature frosting to make the frosting!

Halloween sprinkles. Any sprinkles can be used to decorate the tops of the cupcakes.

Edible candy eyes. These are fun to sprinkle on top too. They can be found at baking stores, craft stores with a baking section or online.

How to Make Gluten-Free Poke Cupcakes

Gluten-free white cake mix can be difficult to find. The closest we’ve found is Bob’s Red Mill gluten-free Vanilla cake mix which has a white cake option or Kinnickinnck which makes a gluten-free White Cake mix.

How to Make these Halloween Cupcakes – Step-by-Step

The frosting will be a light orange (food coloring can be added) and will have a light flavor of orange but will mainly taste like buttercream.

Heat oven according to the cake mix. Place cupcake liners in a cupcake pan.

STEP 2. Bake and cool the cupcakes

Heat 1 cup of water to boiling. Turn off the heat and add 1 3-ounce package of jello. Stir until fully dissolved.

Add the cupcakes to a large baking pan. NOTE: they are shown here in the cupcake pan but it’s easier to take them out of a baking dish after the gelatin sets.

Using a skewer (for fine holes), a drinking straw or chopstick (for larger holes) poke multiple holes into the cupcake. These will fill with gelatin so poke about 3/4 of the way to the bottom of the cupcake (photo 3).

Gently spoon the jello over the holes. You can make multiple passes. NOTE: the holes will not appear to be filled (photo 4).

Place the cupcakes in the refrigerator and chill for 1 hour.

In the bowl of a stand mixer fitted with the paddle attachment or a large mixing bowl if using a handheld mixer, combine the softened butter and 3 tablespoons of jello from the second package (photo 5).

Beat until combined and creamy.

If you’d like darker orange frosting, add any food coloring now and beat to combine.

Spoon the frosting into a piping bag fitted with a large star tip (we used Wilton 1M). Pipe frosting onto cupcakes, sprinkle with the sprinkles on the top of cupcakes (photos 7-8).

Can I use a 6-ounce package of jello?

You can but will need 3 ounces for the gelatin to go into the cupcakes and 3 tablespoons minimum for the frosting. Using 2 packages dedicates one to the cupcakes (no thinking required). And other for frosting plus some extra. To use one you’ll need to weigh out 3 ounces of jello mix (which we did and it’s about ½ cup).

Use store bought frosting. For a time saver use store bought vanilla frosting, flavor with the gelatin mix and food coloring if desired. OR use purchased orange frosting.

Use a different color jello. Purple (grape) or green (lime) would also be great Halloween flavors and colors.

Sprinkle option. Use any Halloween mix or black sprinkles. Instead of sprinkles gummy worms, gummy candies, or candy corn can be used.

Do not pour the jello over the cupcakes. Spoon in over the holes.

Using a large scoop makes scooping the batter into the liners fast and less messy.

Piping bag tip. The easiest way to fill a piping bag is to place it tip down into a tall drinking glass. Fold the extra portion of the bag around the outside of the glass. Then spoon in the filling.

Store cupcakes in an airtight container in the refrigerator for up to 4 days. 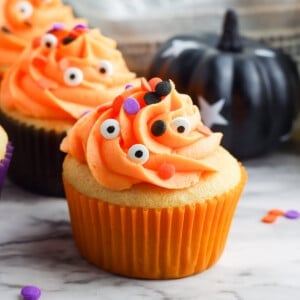 Prep time includes making the cupcakes, frosting, adding the jello and frosting the cupcakes. Frosting will be a light orange (food coloring can be added) and will have a light flavor of orange but will mainly taste like buttercream. Variations  Pro Tips