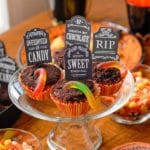 Halloween Cupcakes make the holiday feel like a party! These Graveyard Cupcakes are a box mix hack that are SO easy to make and everyone loves them!

This Halloween treat will be the star of your Halloween party, class party or to celebrate the holiday anytime.

I promise you anyone you serve them to will be so excited and will never know how easy they are to make.

Graveyard Halloween Cupcakes will become a holiday tradition everyone begs for!

We do it up big for Halloween every year from the decorations to the food. But I often don’t have time to labor over intricate treats.

These Halloween Cupcakes pack a WOW punch but are really so easy to make.

Simple frosted chocolate cupcakes transform into a spooky graveyard scene with a few tricks and a few props!

Everything you need is easy to find at a grocery or craft store, or online.

Halloween cupcake papers are optional but a great finishing touch!

Make Them Gluten-Free or Allergy-Friendly

Any cupcake mix and frosting can be used. Choose a box mix or from scratch recipe for your dietary needs.

Often prepared gluten-free cupcakes can be found at the grocery store too.

A Fun Halloween Activity for Kids to Make

These Halloween Cupcakes are part baking and part craft. They are a fun holiday recipe kids love to make too.

Even if kids are too young for the baking, sticking the tombstones and worms in the Halloween cupcakes is fun at any age.

Fake dirt, a creepy worm and mini tombstones are all that’s needed for exciting cupcake decorations.

The Tombstone Toppers steal the scene and are easy to create.

Free Printable Tombstone Toppers are cut out and attached to lollipop sticks to insert into the cupcakes.

For a detailed printable version of the recipe refer to the recipe card at the end of the blog post.

STEP 1: Print the tombstones on white cardstock. Cut them out.

STEP 2: Place a lollipop stick on the back of each tombstone. Position it so the bottom of the tombstone will be sitting flush with the top of the cupcake.

STEP 4: Frost a cupcake and place top side down in the crumbs.

STEP 5: Gently turn the cupcake in the crumbs until covered (photo 1) with no frosting showing (photo 2).

STEP 6: Insert the tombstone in the cupcake (photo 3).

STEP 7: Insert a chopstick into the cupcake to create a hole for the gummy worm (photo 4).

To ensure the crumbs (dirt) stick in the frosting, frost cupcakes one at a time. After frosting put immediately into the crumbs.

If using store-bought chocolate cupcakes, adding some frosting to the top before dipping into the crumbs will ensure the crumbs stick.

Assembled Halloween cupcakes can stay at room temperature for the day unless the temperature is very warm outside.

If serving cupcakes later, refrigerate the frosted cupcakes with crumbs/dirt for 3-5 days in an airtight container. Finally assemble before serving.

If storing leftover Halloween Cupcakes, remove the tombstone topper and the gummy worm. The gummy worm will become hard if chilled.

Try these Easy Dinner Recipes too 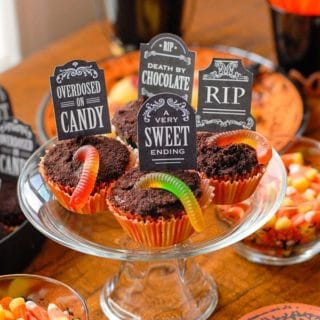 Note on Frosting: A key step with this recipe is frosting each cupcake and dipping it into the cookie crumbs one at a time to allow the ‘dirt’ to adhere to the frosting. Recipe Time: assumes cupcakes are baked. The prep time includes preparing the tombstone toppers, frosting and assembling the Halloween cupcakes.

These Graveyard Halloween Cupcakes are the star of the holiday and so easy to make!