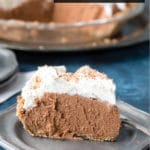 French Silk Pie is a rich, creamy dessert all will beg you to make. This version has an Irish twist and an unexpected crust that’s out of this world delicious. 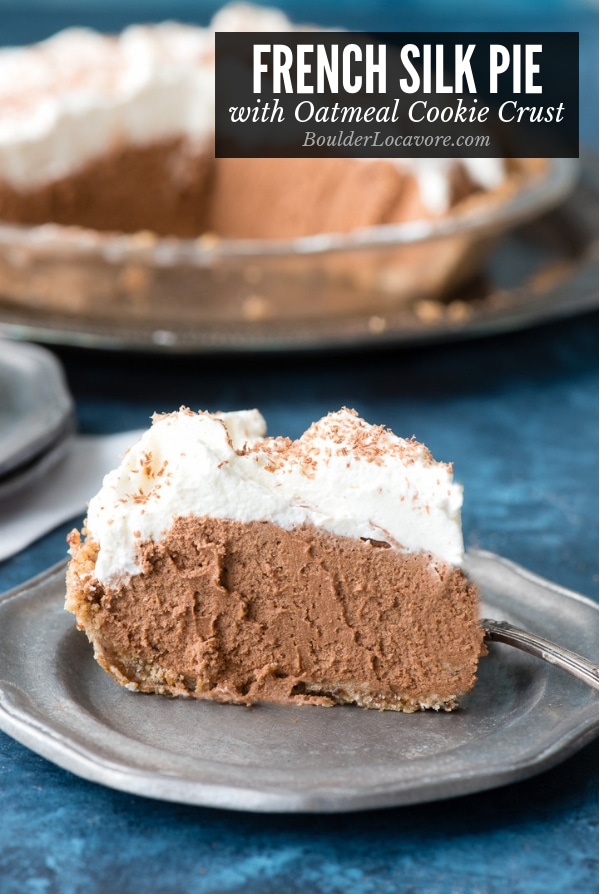 A classic dessert recipe for something like French Silk Pie is always a hit in its traditional form.

This French Silk Pie recipe takes it up a notch with a rustic oatmeal cookie pie crust (easy and homemade).

It also has an Irish Cream twist perfect for St. Patrick’s Day and the rest of the year! 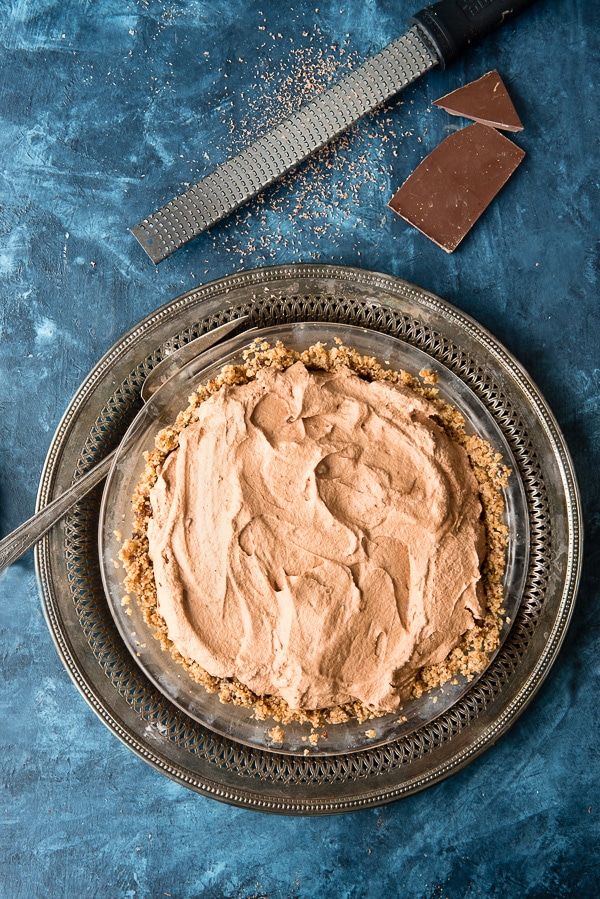 What is French Silk Pie?

If you’ve had a French Silk Pie, you’ll never forget it. It’s rich, chocolatey and very similar to a chocolate mousse.

The intense chocolate filling is traditionally not cooked and includes uncooked eggs, along with butter, sugar and chocolate.

French Silk Pie is a chilled pie. The crust is baked but the filling is not.

When assembled the entire pie is chilled.

I wanted to change up the traditional French Silk Pie to both celebrate St. Patrick’s Day (though you’ll want it more often than just for the holiday, believe me) AND to work around the inclusion of raw eggs. 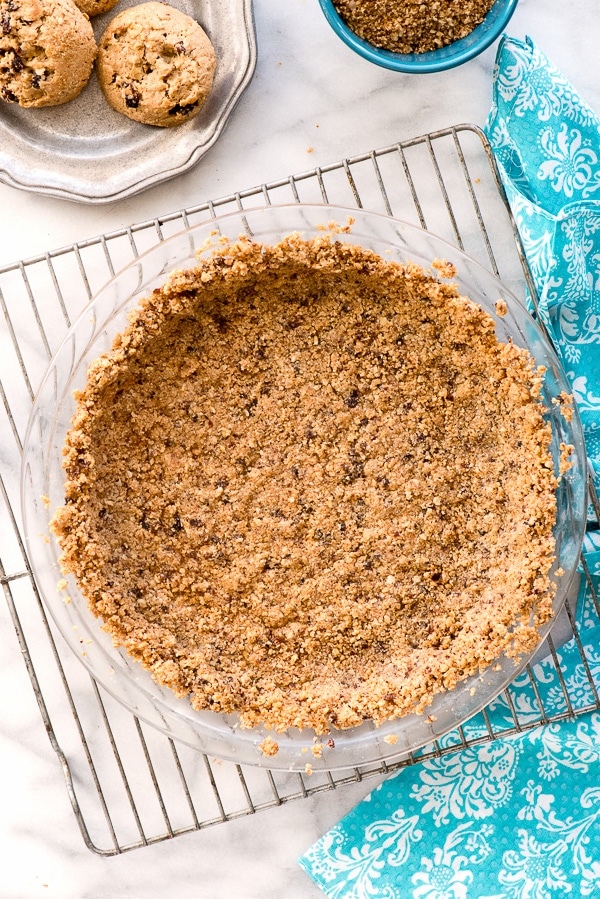 Here is what makes this French Silk Pie unique, special and with an Irish twist:

NOTE: It’s not a boozy tasting pie, but rather the flavors are made even deeper with the addition of the Irish Cream liqueur (very much like Irish Chocolate Mousse with Baileys)

The ingredients are simple and easy to find! 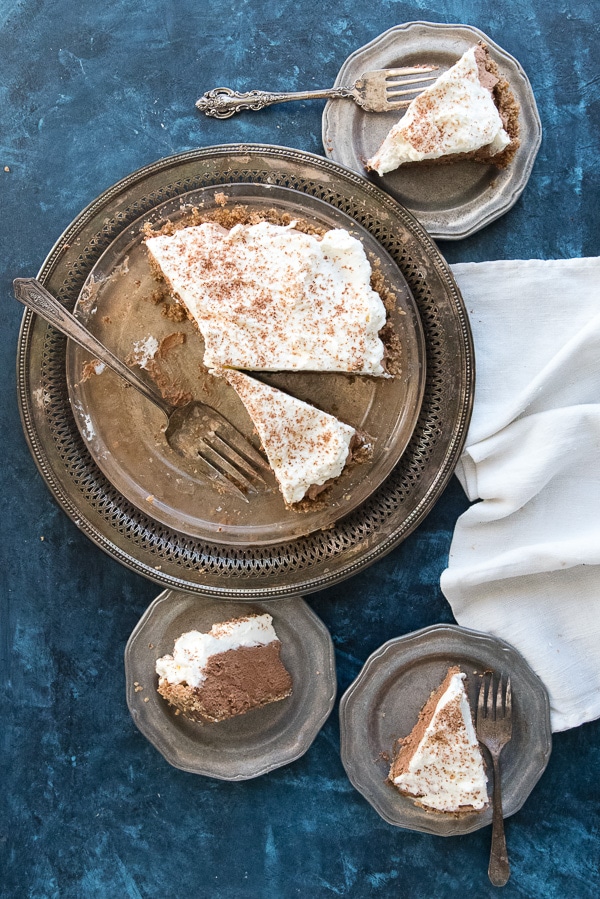 Certain special interest groups are guided not to eat raw eggs for health risks; as well as the avoid the risk of salmonella, it’s suggested to use pasteurized eggs.

On a recent shopping trip to the grocery store I looked for pasteurized eggs for this recipe.

The large grocery chain grocery store not only did not have any but none of the employees (nor the store manager) even knew what pasteurization was.

I decided if it was that difficult I’d rather incorporate a change to the French Silk Pie recipe rather than require that type of egg hunt!

Instead of using raw eggs, the eggs and sugar are combined and heated on low just until reaching 158 degrees Fahrenheit which is the ‘safe’ temperature for egg yolks (for whites it’s lower so the full egg is covers).

This method does not cook the eggs in the traditional sense; they are still liquid and safe related to food borne illness.

This is a perfect job for an instant read thermometer.

The part of this dessert that really sets it apart and makes it special is the oatmeal cookie pie crust.

Don’t we all have memories of fresh oatmeal cookies and milk?

They have a rustic, homey charm unlike any other cookie.

Any oatmeal cookies may be used (regular or gluten-free; store bought or homemade).

The cookies are processed into crumbs with the volume required noted in the recipe card below.

I haven’t seen another oatmeal cookie crust recipe and now that I’ve made it, we’ll be enjoying many other pies with it in the future and hope you will too! 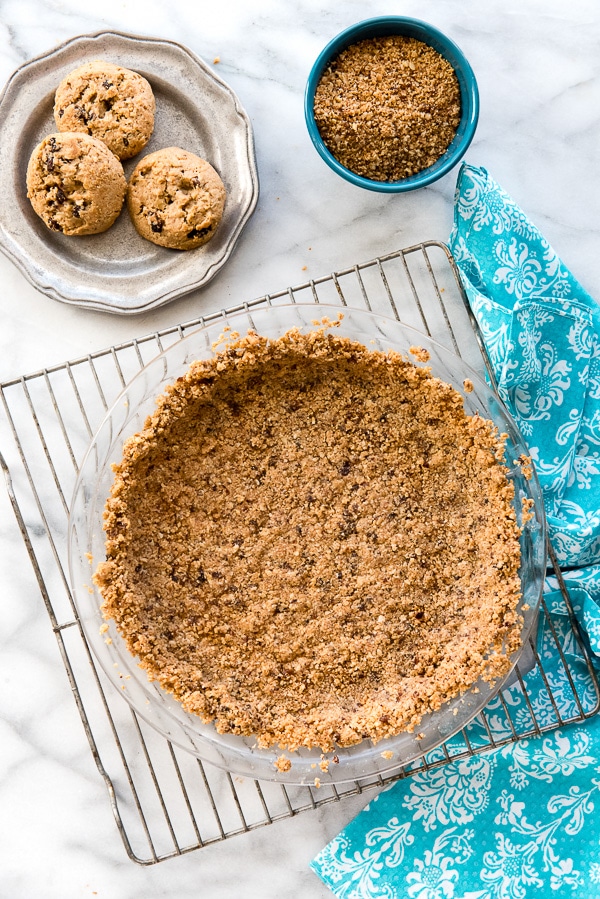 How to Make French Silk Pie – Step by Step

Personally when I see a recipe with a long list of instructions, I often skip it. It can feel overwhelming.

This recipe has a number of steps. They are all easy and broken down to make the recipe easy to follow.

Trust me, this is a recipe you’ll love to make! And everyone you serve it to will feel the same.

For complete detailed instructions refer to the recipe card at the bottom of the post. 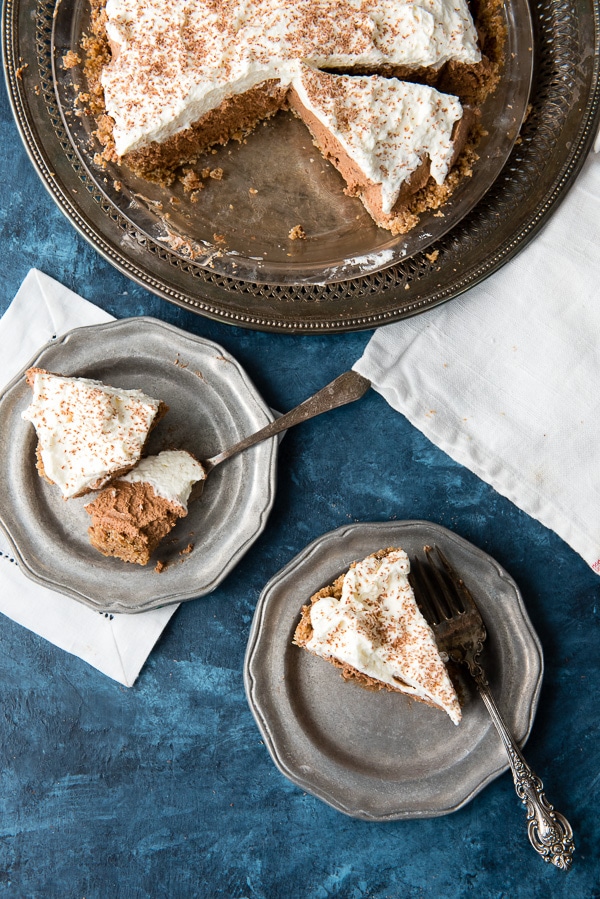 How to Store French Silk Pie

Cover lightly with plastic wrap and refrigerate for 3-4 days. 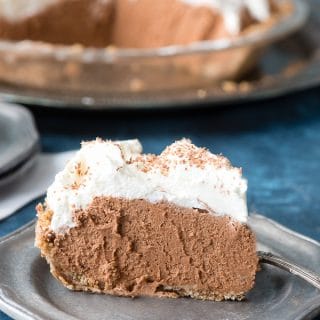 This post was originally sponsored by Udi’s Gluten Free.