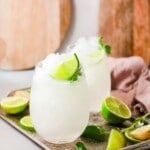 Change up your frozen cocktail game with a Frozen Caipirinha! We’ve taken the national cocktail of Brazil and turned it into a refreshing boozy slushie that’s fast and easy to make!

There’s no question why the Cairpirinha is Brazil’s national cocktail. One thirst quenching sip and you’ll get it.

It has become wildly popular internationally for good reason.

We’ve made a frosty frozen version that will remind you of a liquor-y slushie for adults in the best of ways.

This is one cocktail recipe you’ll want to sip all summer long.

What is a Caipirinha?

First off, how do you pronounce Caipirinha? Kai-Pee-Reen-Ya (click the pronounciation to hear it pronounced).

This three ingredient cocktail is the pride of Brazil. It’s made with Cachaça (a sugar cane fermented liquor), lime and sugar.

This boozy sipper has a fresh flavor and is served over ice.

The traditional version is mainly liquor. So much like a Manhattan it’s meant to be sipped.

Our frozen version also has 2 ounces of liquor per serving but isn’t quite as potent thanks to being blended with ice and limeade.

The end result isn’t as thick as a frozen margarita but more like a slushie which we love.

The term ‘caipirinha’ is Brazilian Portuguese and refers to someone from the countryside. The cocktail is believed to have been invented in the 19th century by farmers in the Piracicaba region around Sao Paolo.

It was a prized local drink highlighting the fruits of this sugar cane region.

Some historical accounts trace the Caipirinha drink to Portugal where is was made with lemon, garlic and honey as a tonic for the Spanish flu in the early 20th century.

With the growing international availability of Cachaça the cocktail has become widely popular worldwide.

This national drink only requires three ingredients: lime, sugar and cachaça. The frozen version consolidates flavors and only cachaça and limeade are used.

Cachaca is pronounced Ka-Shah-Suh (click to hear the pronunciation). This sugar cane spirit is key to making an authentic Caipirinha.

It’s similar to rum (which is also made from sugarcane) but to be called Cachaça it has to be made in Brazil (similar to champagne having to be made in the Champagne region of France).

To me it has the flavor of a rustic rum. The version we used had very light aromas of banana.

Cachaça used to be difficult to find but is now available at most liquor stores often with a few brand options.

Similar to tequila there are different types of Cachaca depending on how it’s aged and stored.

Branca or ‘white’ is stored in stainless steel containers before it’s bottled. Classic (classica) or Silver (prata) rests in woods that do not release any color, keeping the liquor clear.

Gold or Aged varieties have been stored in aged wood which will change the color of the Cachaca and the flavor.

Which type of Cachaça to use?

Each brand will taste slightly different. For this cocktail we used Leblon Cachaca at the recommendation of our favorite liquor store.

Here are a couple lists of options with descriptions to consider. These lists from The Spruce Eats and Thrillist overlap in brands but each describes them differently.

For a traditional cocktail fresh lime is muddled with the sugar.

For our frozen version we substituted limeade which gives the classic flavors and allows for blending.

Simply Limeade or Santa Cruz Organic Limeade are two types that have true lime flavor that’s sweet but not super sugary. They are usually available at most grocery stores.

This will be used for the traditional (not frozen) cocktail only.

How to make a classic Caipirinha

Quarter one fresh lime and muddle the lime wedges in a large glass with 2 teaspoons sugar.

Fill glass with ice. Pour in 2 ounces of Cachaça and stir.

How to make a Frozen Caipirinha

Combine the ice, limeade and cachaça in a blender. Blend until slushy. 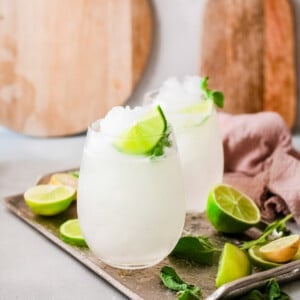 How to make a traditional Caipirinha: