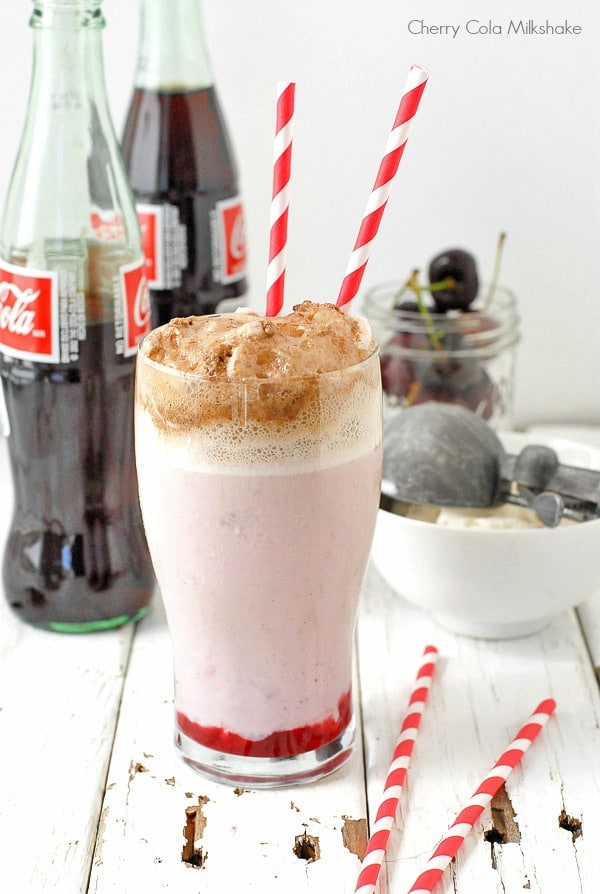 I’m a mindful eater. That doesn’t always mean I eat all my vegetables or that I don’t ever eat dessert. I generally stay away from soda however I became smitten on a road trip through West Texas with Cherry Coke and have never looked back.

I live in the land of reusable personal water bottles. We all have a complete wardrobe of Camelbak’s, BPA-free plastic bottles with flip up spouts, zippy looking Sigg metal bottles with sport lids and more. Everyone I know packs water everywhere they go and if not they buy bottles of water; so it never occurred to me there are places where bottled water would not be sold as a norm. 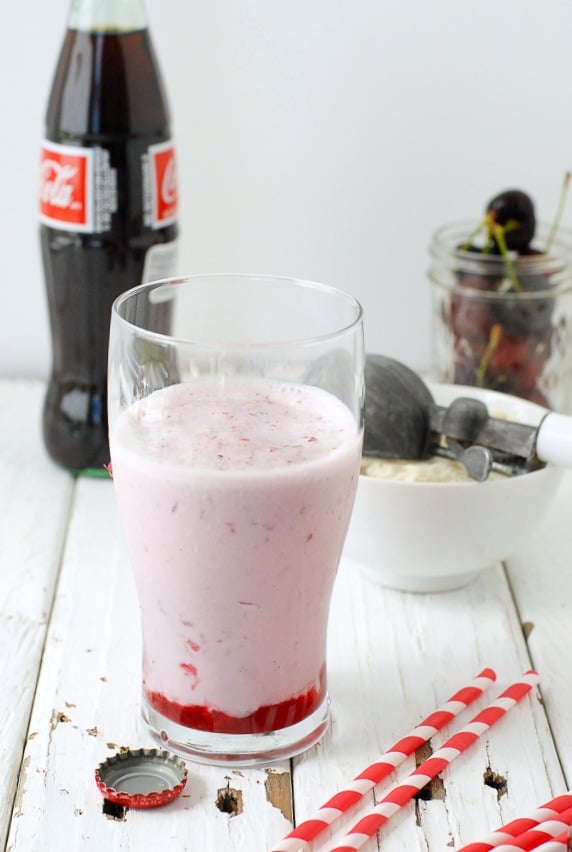 On this particular road trip we spent a few days in Lubbock Texas tracking all the best BBQ joints as recommended by locals. One place, which proved to be the crowned jewel of local BBQ, opened in the morning and stayed open until they sold out, which was early. After one try around 3 p.m. meeting closed doors, we arrived for the second shot exactly when they opened and it was there, sitting on the few benches lining each short wall of the one room eatery that we were confronted with ‘no water available’ and opted for Cherry Coke. What I thought was a one off choice has turned into a secret passion for me. I don’t drink it much or often, (and admittedly always drink it on road trips), but it is a favorite flavor to me. 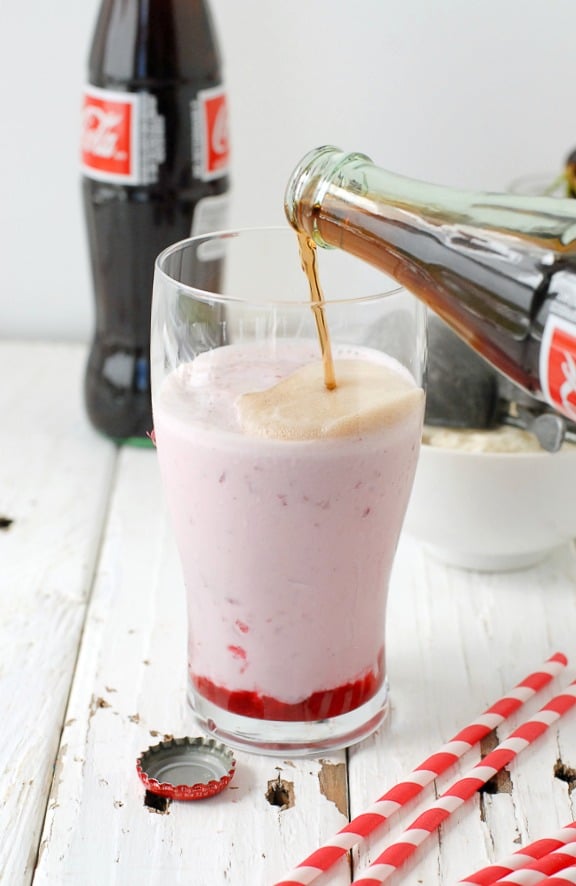 When I was invited to take part in Milkshake Week, hosted by esteemed blogging colleagues Lindsay of Love and Olive Oil, and Julie of  The Little Kitchen, I pounced on the chance full of more milkshake ideas than I should ever drink! The first idea that came to mind was a Cherry Cola Milkshake, created from a merge of flavors culminating in a Cherry Coke flavor redo in a different form. 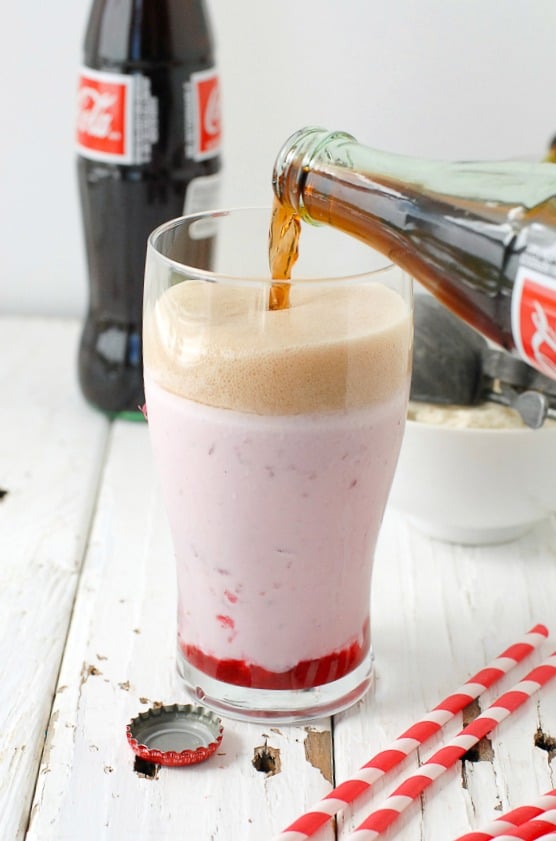 I immediately felt guilty and thought I should make something else. Maybe with peaches or other seasonal fruit. But I could not shake the Cherry Cola idea. Maybe I should make something exotic like Gluten-Free Birthday Cake Milkshake. But that seemed to offer the potential to be a straw-clogging soggy cake mess. And I REALLY wanted to make the Cherry Cola idea. So rather than fighting it, I made it. In all its glory. The best middle ground between a shake and float; creamy vanilla ice cream flavored with homemade Fresh Cherry Lime Sauce with a Cola float on top that can be left to slowly sink into the shake or stirred in. It does not disappoint! 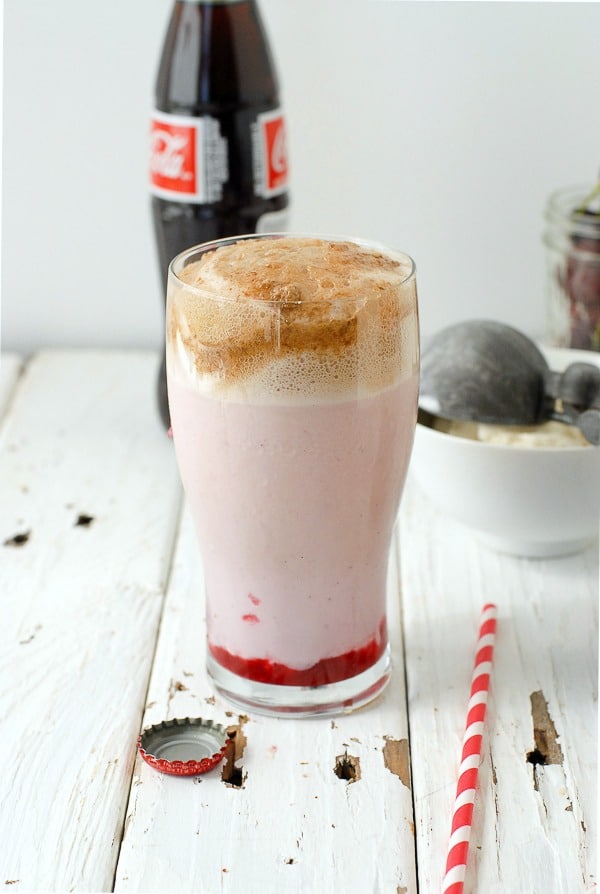 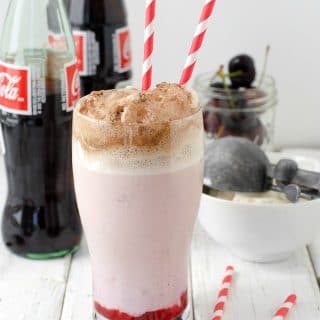 *Mexican Coke is a version of Coca Cola produced in Mexico and made with cane sugar (versus the regular high fructose syrup) creating a more natural flavor. Mexican Coke is widely popular (even available at Home Depot I've been told), is sold in glass vintage-looking bottles and can be identified by 'Hecho en Mexico' running along the side of the label on the bottle. Total Time includes making a batch of Fresh Cherry Lime Sauce. Milkshake takes the time of blending.

You’ll want to visit the other talented bloggers who posted mouthwatering  Milkshakes today via the links below: