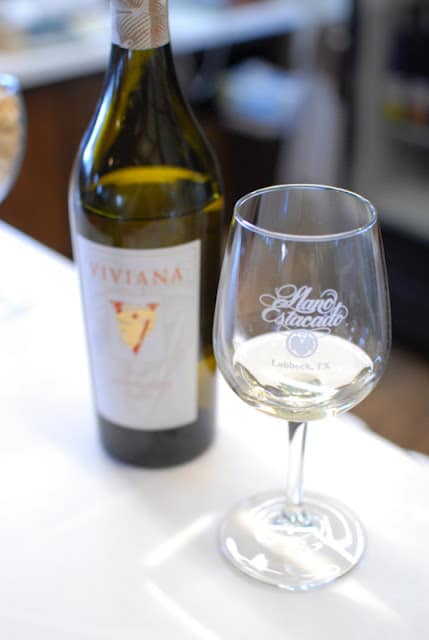 As an ex Northern Californian having lived for years with wineries a stone’s throw away I would be lying to say Lubbock’s bevy of wineries did not pique my curiosity.  So much so that they became a target of my recent whirlwind food and drink road trip hunting for notable local fare in the Panhandle-Plains region of West Texas.  I was unsure what I’d encounter with wines from Texas but with fingers crossed I set forth. 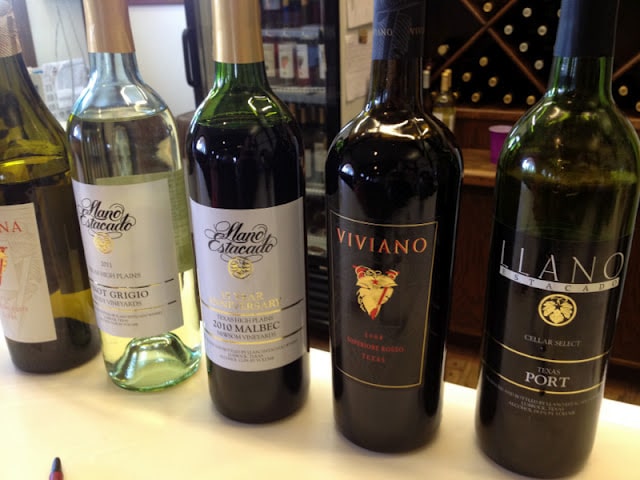 Llano Estacado (Llano pronounced ‘yawn-o’) is probably the best known wine in this region though the fame of their wines is not limited to West Texas.  I found their wines popping up in wine competitions nationally, at wine conferences with candid wine blogger reviews speaking highly of their line.  Thanks to my iPhone ‘gal pal’ Siri, I became miserably lost attempting to locate the winery but when finally arriving found a sprawling winery about 15 minutes south of Lubbock, technically in Clayton Texas.  As we pulled into the parking lot I felt I’d been transported to an Italian-fashioned wine estate in California much more so than what I’d assume from West Texas.  Not a longhorn skull to be found; I realized I needed to check my presumptions at the door.
Next to the sleek exterior of the winery is a small 3 acre plot of grapes the winery is attempting to cultivate organically (the Sangiovese is thus far showing the most promise).  Llano Estacado does not produce their own grapes for current wines but this is giving them a taste of organic production and experimentation about how grapes do in their immediate region. 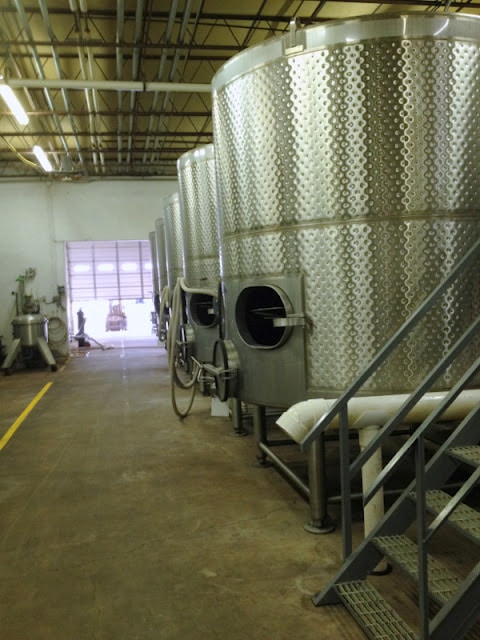 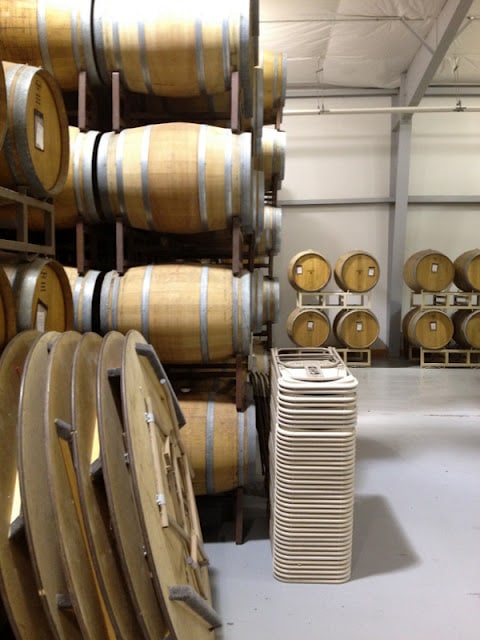 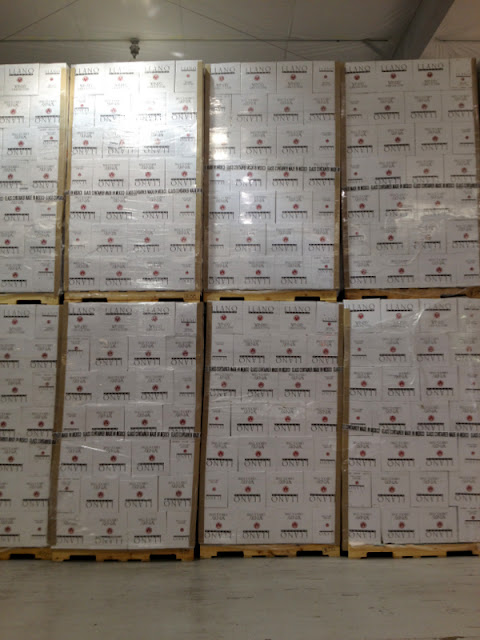 When entering the facility we were greeted by a spacious gift shop and tasting room.  Cheery and knowledgeable Kelly took us on a tour (which they conduct every 30 minutes or in our case spontaneously as we were the only ones in the tasting room at the time) and I was instantly impressed at the size of the operation; production of about 170,000 cases annually.  We were able to walk through the entire process, through the bottling machinery to be met by a warehouse of unending pallets shrink wrapped full of wine boxes ready to ship out.  Candidly it left me tripping over ‘ah ha’ moments left and right.  It harkened back to reflections Colorado food and wine people have over the realization that ‘Yes Virginia, there IS good wine made in Colorado’. 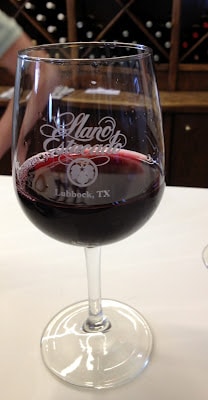 What drew me to them initially over the other local wineries was the fact that they try to source their grapes from within a 200 mile radius.  Assistant Winemaker Jason Centanni joined our conversation and it became clear quickly Texas winemaking closely parallels Colorado winemaking both in the stage of industry maturity but in some of the challenges.  Llano Estacado has a breadth of wines from higher end Reserve wines to a more affordable line of wines.  The volume of the affordable lines and the percentage of the production they occupy provide grapes cannot be exclusively sourced from Texas to support their production volumes.  As in Colorado, grape growers are increasing their crops though are at the mercy of Mother Nature as well, keeping the planning in constant motion.  Jason shared the grapes they use for their Premium wines, the wines the Winemakers are really tinkering over, are all able to be sourced locally.  Llano Estacado is the largest premium winemaker in the state of Texas. 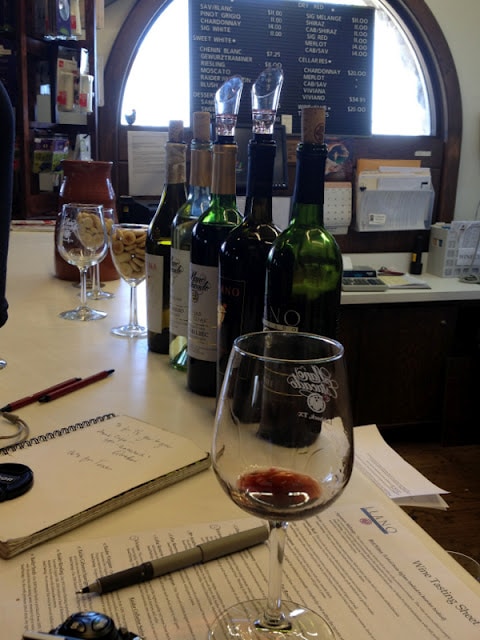 When Kelly pulled out the tasting list I was astonished at the extent of their offerings.  I asked to taste some of their signature wines, those they felt they were best known for and most proud of, representing the Texas lineage.  As with Colorado there are several microclimates emulating the terroir from major grape growing regions around the world affording a wide array of varietals and blends. 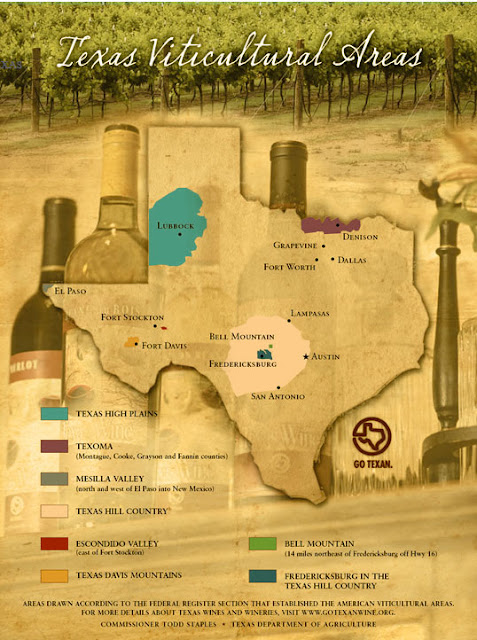 The history and timeline of the winery is impressive and includes the Queen of England, White House dinners, Wine Spectator acknowledgements, The Today Show as well as award after award after award.  You really would never know for the lack of pretense shown by all those with whom I spoke.  They are devoted to their craft, no question, but with absolutely no air about them.
What I thought would be a novel stop in the Panhandle-Plains landscape, and hoped might yield something mildly drinkable, put me square in my place.  This ex-Californian wine drinker was properly schooled by the quality of Llano Estacado wines; the staff did not need to say a word, the wine did all the talking necessary. 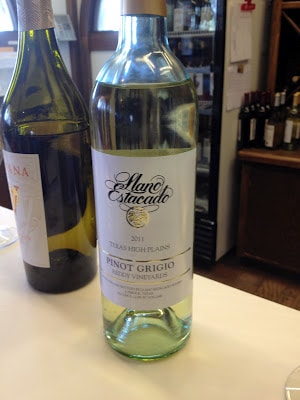 I was interested in those wines highlighting the Texas grapes and loved their Viviana and Viviano wines.  The first, a white, with a unique blend of floral and tropical flavor I’m sure facilitated by the Texas heat and Riesling, Gewürztraminer, Muscat Caneli and Viognier grapes.  It was the Viviano though who made its way home with me.   A complex wine, again boasting of Texas magic, extended barrel aging leaving it my new wine crush validated with a 16 year award winning pedigree.  All sourced in Texas, Viviano blends Cabernet Sauvignon, Sangiovese with Syrah, Malbec, Petite Verdot and Cabernet Franc to Panhandle-Plains perfection. 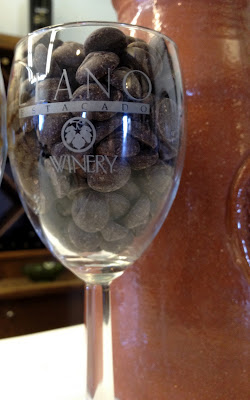 Having a soft spot for Port I tried the Cellar Select Port.  Kelly prompted me to let a chocolate bit melt on my tongue then take a sip.  Loving any ritual leaving me feeling I might be a member of a sorority afterward I followed her instruction.  A bottle of the port was quickly tucked away in the over packed back of my vehicle, traveling the remainder of my road trip and is now nestled snugly in my wine cellar as I write. 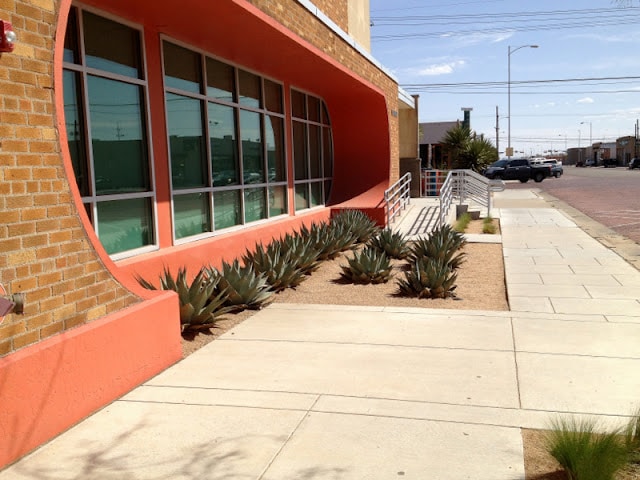 There were three other wineries of note in the area but one continued to come up as almost a mantra; from our server Ryan at Triple J’s Chophouse (whose uncle is involved with the State’s viticulture program), to Jason Llano Estacado’s Winemaker to a couple breezing in as I was leaving Llano Estacado who had just visited two wineries prior with this one gaining gold stars: McPherson Cellars.  With about an hour at hand I zipped back into the Depot District of Lubbock to a contemporary-meets-Southwest building which houses McPherson’s winery.   A converted 1930’s Coca-Cola factory has been transformed into one of Texas’s most efficient and sleek urban wineries.
As with any small industry the winemaking roots in Lubbock are deeply intertwined.  I was told in the late 1960’s Dr. McPherson, a professor at Texas Tech University, rescued some old grape vines scheduled for removal and nurtured them, beginning experimentation with making wine in the basement of Texas Tech until discovered then ousted, eventually being funded by investors to really get a winery going.  After returning to Boulder and doing some research, I found a different version of this historical account about Dr. McPherson’s business partner, Bob Reed planting the removed grapes around his patio and experimentation beginning in the basement in Texas Tech until investors stepped in to make it official.  Whichever the case, the history is charming and led to the beginning of Llano Estacado winery in the mid 70’s post-prohibition Texas.
The entire McPherson family has a footing in the agricultural world of grapes and wine.  Dr. McPherson continues to produce grapes at his Sagmor Vineyard where he was the first to plant Sangiovese grapes in Texas.  Son Kim graduated from Texas Tech with a degree in Food Science and proceeded to a degree in Enology and Viticulture from Davis in CA a well reputed university for viticultural studies.  He returned to Lubbock to become the winemaker of Llano Estacado then Cap Rock winery, founding the McPherson label as tribute to his pioneering father in 2000.

Like Llano Estacado I could go on about the wine quality of McPherson to the extreme torment of you the reader for the impressive offerings and breadth of wine types available.  I was hosted by Lake in the Tasting Room (who I learned remarkably at the end of my speed tasting is still in college; would never have guessed from his joie de vivre and ‘renaissance man’ palate for the wine) who keenly set about guiding me through the tasting options in a thoughtful way letting the wine take the lead.  I personally feel tasting standard varietals can give insight to a winemaker’s prowess but it is the unique or signature wines I covet both loving something new but also to get a flavor of their level of inspiration. 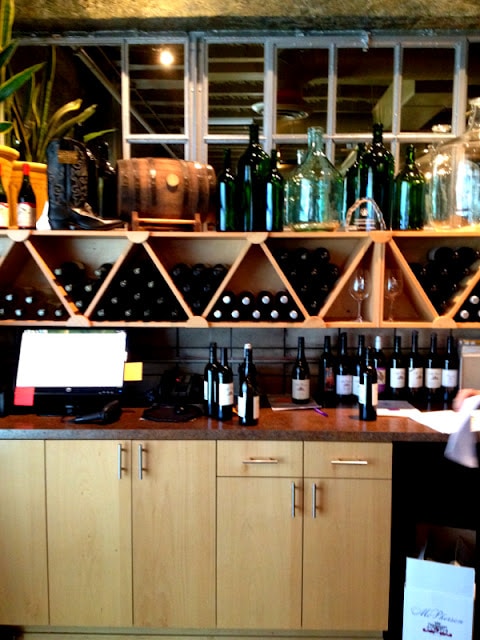 McPherson delivered on all accounts.  Their wine is inventive, delicious and affordable especially for the sophistication of the blends.  I walked away with a bottle of 2011 Albarino (a light white with fruit aromas sure to take the edge off the sultry summer afternoon heat), 2009 DBS (a Dolcetto, Barbera and Sangiovese blend, favored by smokers observed by my tasting room companions; I don’t smoke but loved being able to taste each grape uniquely in this layered sophisticated blend), 2009 Le Herencia (described to have ‘an intense aroma complimented by ripe berries, black current and rich smoky flavors’; true), a 2009 Sangiovese (the crowning glory grape of this region I believe) and more.  The most expensive bottle was $18.
Google ‘McPherson Winery’.  Anywhere you find reviews it’s a complete love fest.  No mistake why.
When all was said and done I was very excited about my new discovery of West Texas wines.  As with every other stop Texas, hospitality abounds and adds a sparkle to a rich and sophisticated commitment to the art of grape growing and winemaking in this region.
Other wineries of note:
Cap Rock was a winery that was brought up often in my discussions with locals.  Apparently a breathtaking estate bearing some good wine, it has fallen on some hard and turbulent times of late.  Bankruptcy, change of management, leaving it attempting to place firm footing back on Lubbock wine soil and on the road to renewed success.
Pheasant Ridge Winery was recommended when discovering my locavore affinity.  They apparently produce grapes on their estate where they also bottle the wine.  They were reported to be a smaller winery but one I would surely enjoy.  Please ‘report in’ if you visit!
« Silk Dyed Easter Eggs and Bunny Shaped Hard Boiled Eggs
Discovering the Original Frito Pie in Santa Fe, New Mexico (recipe) »