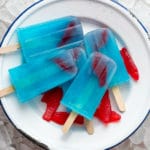 Perhaps it was writing about best family beach vacations on the east coast or emerging from three days straight of driving rain but I’m ready to start up this summer’s boozy popsicle recipes. What a better way than with Blue Lagoon Cocktail popsicles (with a mocktail version too!).

I started making cocktail popsicles a few summers ago and find them to be a refreshing way to eat your cocktail all summer long. They are great for parties and holiday celebrations. I keep them stocked in my freezer all summer long.

What Ingredients are in a Blue Lagoon Cocktail?

A Blue Lagoon cocktail is a combination of blue curacao, vodka and lemonade. It’s light and refreshing in the most fabulous shade of bright blue!

What IS Blue Curacao?

Blue Curacao (pronounced ‘cure-a-sow’) is a liqueur made from the dried peels of lahara, a native orange to the island of Curacao off the eastern coast of South America.

Would you be surprised to learn the flavor of blue curacao is orange? It famously colors iconic cocktails like the Blue Hawaiian but would be used where Triple Sec or Grand Marnier would be in a cocktail. It has a light orange flavor.

The color of these Blue Lagoon Cocktail popsicles is simply irresistible, refreshing and perfect for summer! Like the cocktail, it combines blue curacao and lemonade. However instead of vodka I’ve added more ‘blue’ in Hawaiian Punch.

A red Swedish Fish has been added to the cocktail popsicles for a fun surprise too.

The Trick to Making Cocktail Popsicles

With boozy popsicles, more isn’t better when it comes to the liquor. Because alcohol does not freeze in the same way other water-based liquids do, to ensure solid freezing of boozy popsicles the percentage of liquor is smaller.

If you decide you want to bump up the percentage of liquor to be higher, you’ll find a slushy result when releasing the popsicles from their mold.

This recipe is an easy one to make into a fun mocktail (Shark Week, anyone?!). Remove the blue curacao from the recipe and ½ ounce more lemonade or Hawaiian Punch instead.

How to Make Blue Lagoon Cocktail Popsicle – Step by Step:

Using a 2.5 ounce/cavity popsicle mold, 0.5 ounce of blue curacao is poured into each mold. NOTE: to maintain equal volume of liquor for best freezing, pouring the blue curacao into the molds versus mixing it with the other liquids is recommended.

Combine the lemonade and blue Hawaiian punch, and pour 2 ounces into each popsicle mold. Add a Swedish fish if desired.

Place the lid on the popsicle mold.

PRO TIP: Place a sheet of heavy foil over the top of the mold. Run a finger over the area of the mold where the popsicle stick slots are to identify their location. Use a knife to pierce through the hole and then insert the popsicle sticks. This helps keep the sticks upright and in place while freezing.

Place in the freezer until solid.

To Release Popsciles from mold: run exterior of the molds (not the top but the plastic cavities) under hot water for a few seconds to relase the popsicles. 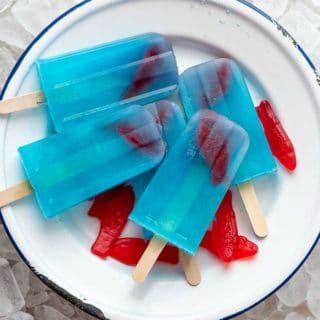 The refreshing citrus punch boozy popsicles will be a summer favorite for the color AND the flavor. They are light and easy to make! Mocktail option included in the instructions.Total Time reflects an estimated 4 hours for freezing. May vary based on different freezers.
5 from 24 votes
Print Save Recipe Recipe Saved! Pin Rate
Course: Dessert
Cuisine: American
Prep Time: 10 minutes
Total Time: 4 hours 10 minutes
Servings: 10 popsicles
Calories: 91kcal
Author: Toni Dash
Prevent your screen from going dark