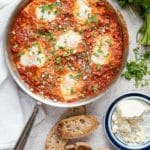 Shakshuka gets everyone to the breakfast table, usually for seconds! This exciting recipe is so easy to make and ‘wow’s diners every time! 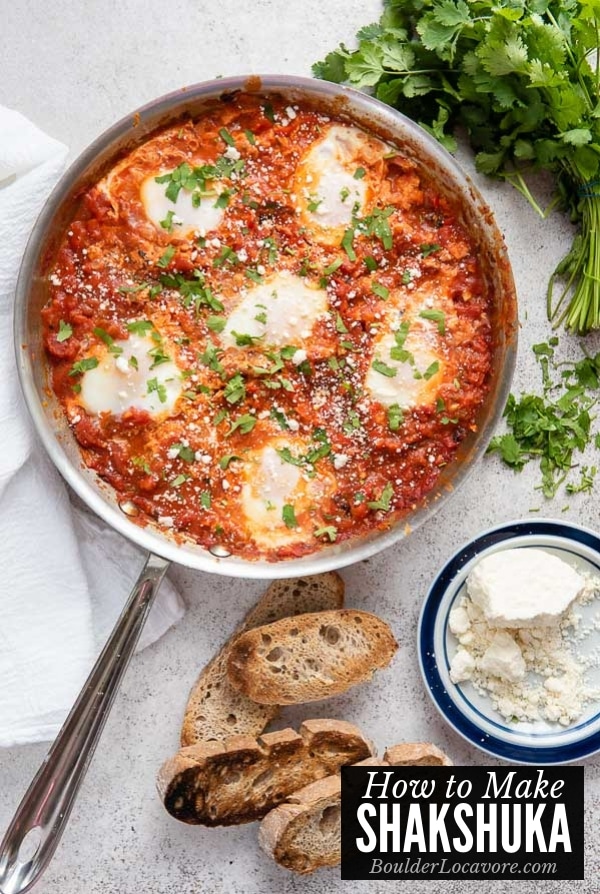 Looking for a new brunch recipe that will wow your diners? This Shakshuka recipe dazzles every time.

Indentations in the sauce allow the eggs cook IN the sauce rather than being added before serving.

A large scoop of the sauce is served with one or two of the eggs. My teen son came back for a total of three helpings!

Not Just for Breakfast

Add some crusty bread for dipping and you’ll have a perfect meal!

Typically this is a breakfast recipe but it’s so delicious you’ll want it for any meal of the day.

How Is ‘Shakshuka’ Pronounced?

First, you may be looking at the word ‘shakshuka’ wondering how to pronounce it.

Where Does It Come From?

Some believe Shakshuka came from Yemen. Others say the Ottoman Empire.

Generally it is a popular Middle Eastern and Northern African dish. 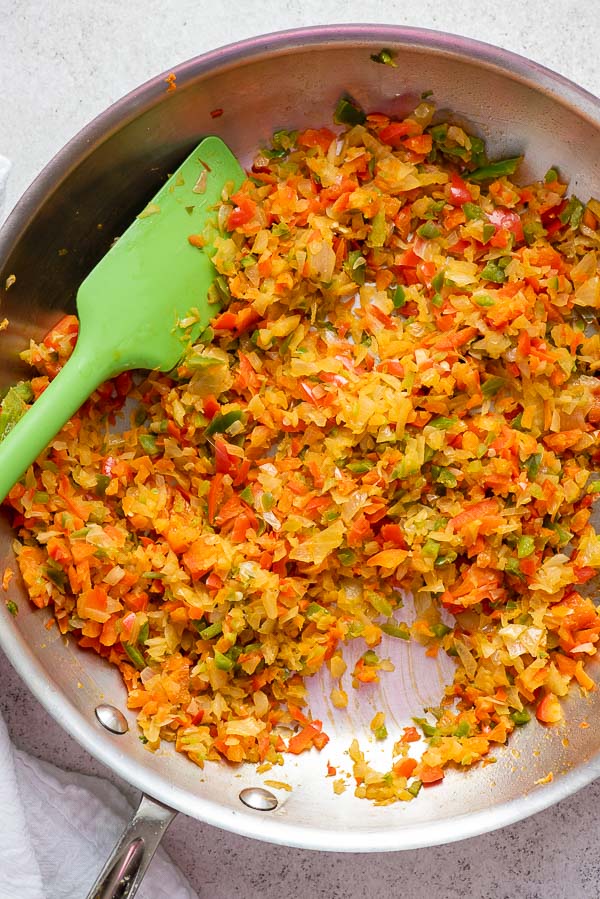 The ingredients are easy to find and wholesome. The spices are what gives the smoky, spicy depth of flavor!

I prep everything I can in my mini chopper. I use it to chop the onions, bell pepper, jalapeno pepper and the garlic cloves.

It is a definite time saver.

Even Tomato Haters Love This Recipe!

Tomatoes seem to be a polarizing vegetable, at least in my family. The dislike runs more strongly in the males for some reason.

Just the remark of their presence can turn some off before the first bite.

The aromatic spices of cumin and smoked paprika seduce anyone in the kitchen from the smell alone! 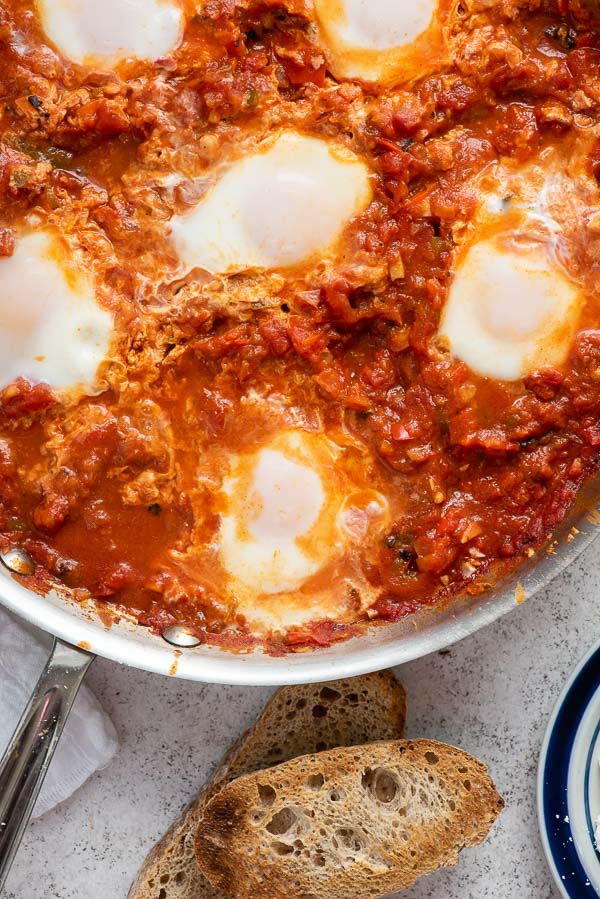 How to make this Shakshuka Recipe – Step by Step:

For a detailed printable recipe refer to the recipe card at the bottom of the post.

STEP 2: Add the aromatic spices and kosher salt to the vegetables to cook for 2 minutes.

STEP 3: Add the crushed tomatoes and simmer for 20 minutes to make the flavorful thick Shakshuka sauce.

STEP 4: After simmering, create divots or indentations with a large dining spoon (large enough to fit one egg). Add all the eggs in this same way. 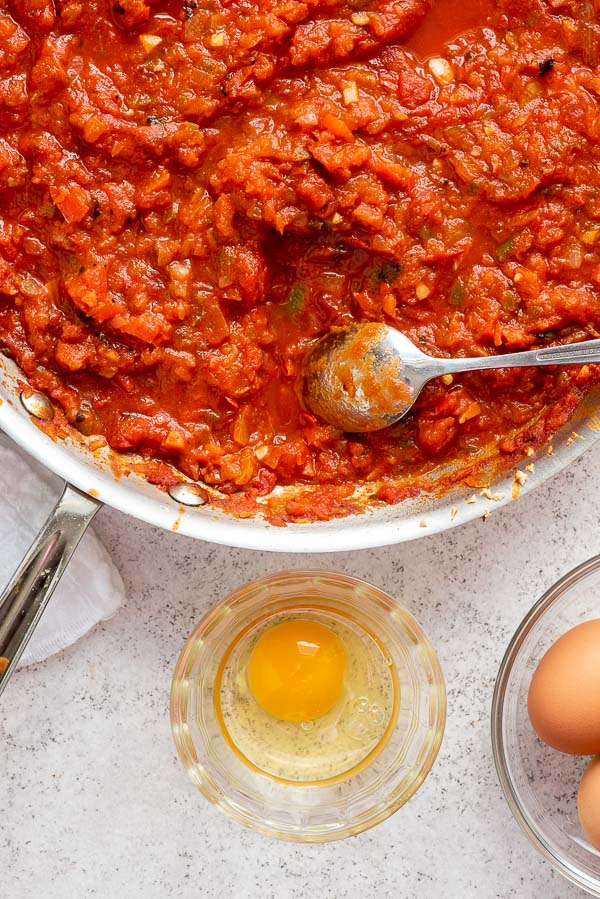 STEP 5: Cover the skillet allow the eggs allowed to poach gently in the sauce for 8-10 minutes. TIP: cook until the whites are cooked and the yolk will still run when cut into).

PRO Tip: How Not to Break the Egg Yolk

There is an easy trick to add the eggs to the Shakshuka sauce!

This controls the egg placement and aids in not breaking the yolk! 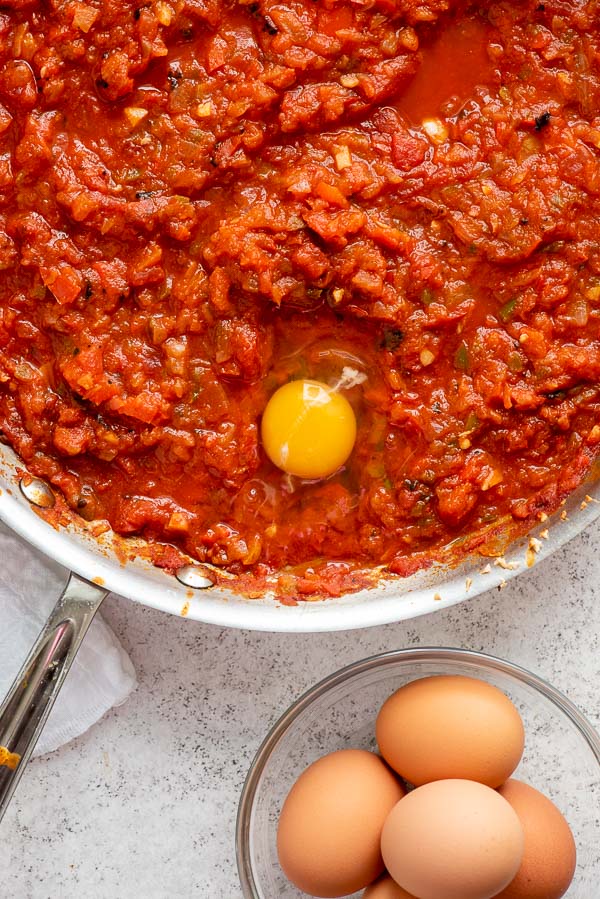 A scoop of the sauce, an egg or two are served with crusty toasted sliced of bread!

This is a dish best served hot and as soon as it is cooked.

Though the sauce will reheat well the eggs will not have the same consistency if reheated.

My recommendation is to eat it when it is prepared.

Tomatoes in a Cast Iron Skillet: Yes or No?

I’m sure you’ve heard this cooking concern before. I did some research about whether is it safe to cook acidic food in cast iron skillets.

I have seen into tomato-based dishes in cast iron skillets all over Pinterest and wanted to get to the truth.

What’s the concern? That highly acidic foods, like citrus or tomatoes, will leach metal from the cast iron into the food.

According to America’s Test Kitchen, the issue is not danger from consuming the trace amounts of metal. The concern is that you can taste it in the recipe being made.

Using a well-seasoned skillet is a must.

What is a Well Seasoned Skillet?

‘Well-seasoned’ means it will have a semi-glossy surface from cooking. This coats the pan in such a way that the metal from the skillet is protected.

The coating helps prevent the metal from easily leaching into the tomato-based food.

I recommend using a non cast iron skillet if possible to produce the best tasting Shakshuka. 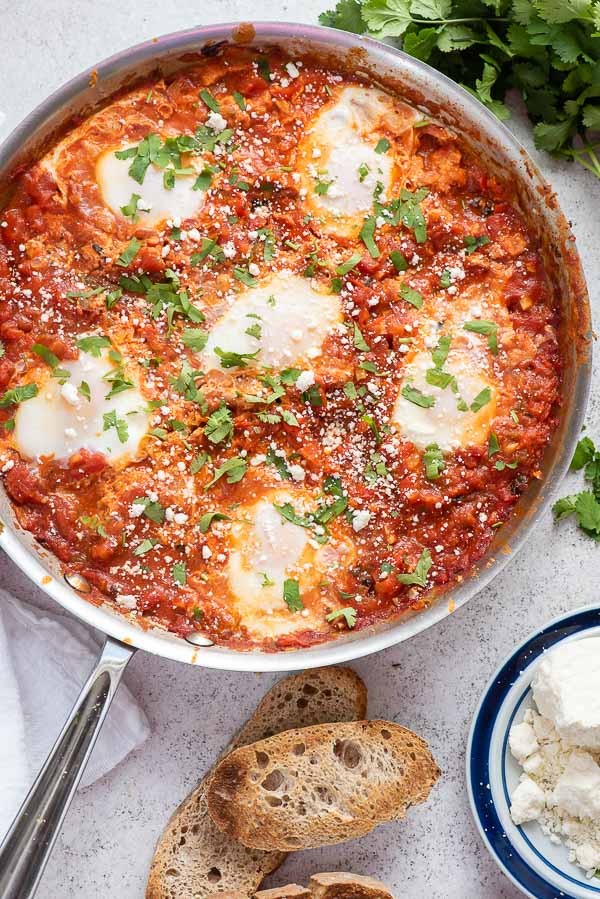 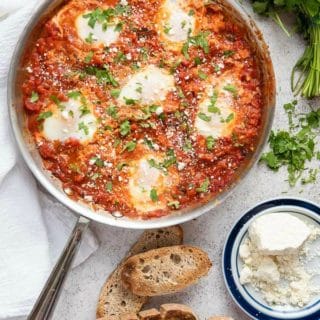 Shakshuka is a hearty, wholesome breakfast recipe that’s easy to make and sure to please!