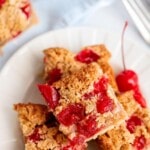 No matter what time of year these easy Cherry Bars are always a crowd pleasing dessert recipe. Shortbread crust piled with chewy cherry and coconut filling. Maraschino cherries are used so it’s an easy recipe all year long.

This vintage recipe has stood the test of time for good reason. It’s easy to make and completely delicious.

Buttery shortbread on bottom, loads of juicy cherry filling and a crackling top that’s so satisfying.

Because it doesn’t use fresh cherries it’s perfect any time and especially popular around the holidays. It’s a wonderful cherry dessert recipe and the easiest way to make delicious cherry bars.

I originally found this recipe handwritten in a home recipe book from 1937.

We loved the flavors and texture as well as how easy it was to make.

While preparing to give it an update we did a bit of research and believe the original recipe may have been featured on a Gold Medal Flour box.

We were surprised to find the recipe in our background research to be almost the identical to this particular recipe from the home cook version.

The owner of our version made a few changes. Instead of mixing the chopped maraschino cherries and stirring them into the batter, she placed them on top, allowing them to gently sink into the luscious filling while they bake.

We’ve made them both ways (photos shared here). The final consistency is pretty much the same but the sinking method definitely produces a prettier bar with more cherries showing.

These would be a great recipe any time delicious bars are called for! Perfect for cherry season or Christmas cookie platters.

These are not the same as cherry pie bars which use canned cherry pie filling.

Unsalted butter. You’ll need 1/2 cup of butter. Be sure to start the recipe with softened butter.

All Purpose Flour. Regular or gluten free measure-for-measure flour blend can be used. For the gluten-free version we love Bob’s Red Mill gluten-free 1-to-1 baking flour. You’ll need 1 1/4 cups of flour divided between the curst and filling.

Cinnamon. Just a smidge of ground cinnamon is sprinkled on the baked crust before adding the filling. You won’t even taste it but it amplifies the cherry flavor.

Baking powder. The rising agent in the cherry bars.

Walnuts. Finely chopped nuts. The original recipe calls for walnuts but pecans could be substituted too.

How to make Cherry Bars – Step-by-Step

Pre heat oven to 350 degrees F. Use parchment paper to line the bottom of a 9-inch by 9-inch baking dish and spray with non-stick cooking spray (photos 1-2).

Cream butter in a medium bowl using a hand mixer or bowl of a stand mixer on medium speed.

Add 2 tablespoons of sugar and 1 cup of the flour. Beat on low speed to fully combine (photo 3).

Spoon into the prepared pan and press down to cover the bottom of the pan (photos 4-5).

Bake for 10 minutes, remove and set aside.

While the crust bakes, combine the remaining wet ingredients and dry ingredients in a large mixing bowl.

Combine the eggs, cherry juice, 1 cup sugar, 1/4 cup flour, baking powder and vanilla. Using a mixer with a (paddle attachment on a standing mixer) mix to combine all ingredients (photo 6).

Stir in the coconut and walnuts (photo 7). Do not over mix.

Sprinkle the cinnamon over the crust (photo 8). Spoon the filling over it (photo 9).

Sprinkle the cherries across the top of the batter (photo 10).

Place into the heated oven and bake for 30 minutes or until a toothpick inserted in the center comes out clean. Do not over brown.

Allow the bars to cool in the pan on a wire rack for 20 minutes minimum.

NOTE: once cooled to room temperature the pan can be covered with plastic wrap and fully chilled in the refrigerator before slicing for cleaner cuts on the bars.

The original Gold Medal flour recipe mixes everything together; the nuts, cherries and coconut (photo 1) and pours that into the baked crust (photo 2).

Their recipe also does not include the sprinkle of cinnamon on top of the crust.

The bars are baked and cut the same as our recipe. Photos 3 and 4 above show what the bars look like if they are made in this way. 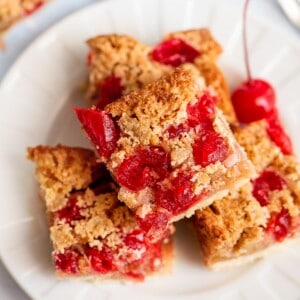 Chilling the bars before cutting allows a cleaner cut.  Storing them Store in an airtight container in the refrigerator for up to 5 days.   This recipe was found hand recorded in a Kitchen Scrap Book from 1937 and shared by Mrs. Fred Henslin (Herslin?).