During our summer stay in Paris, a day trip to the Château de Versailles was without question a high point. A short thirty minute train ride lands one in a different world all together. Almost defying description, the sprawling estate which was once the hunting lodge of Louis XIII, the property has been expanded over the years rendering one of the most magnificent examples of 18th century French art. It has been inhabited by three French kings, all of whom left their mark with building expansions and opulent décor until the French Revolution. The government of France was moved to Versailles in 1682 leaving its walls with many stories to tell of the historically significant events and rich personal dramas which unfolded there. 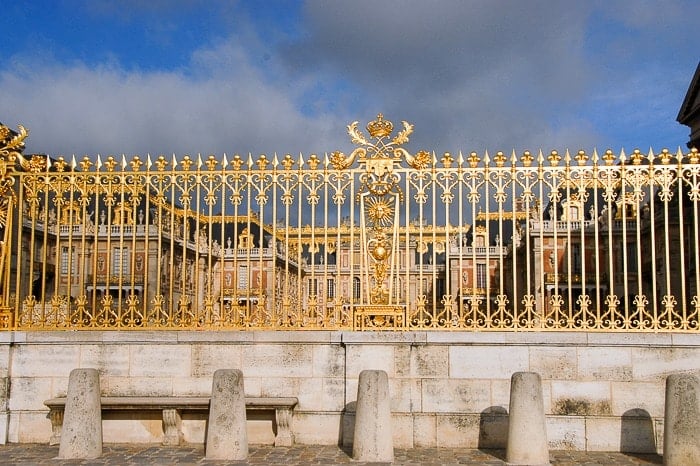 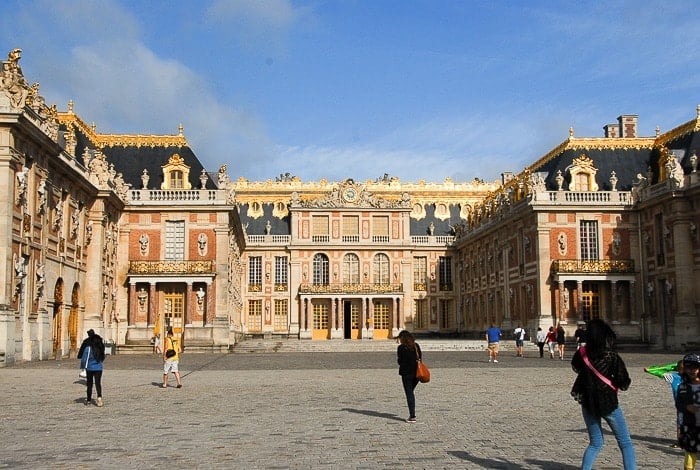 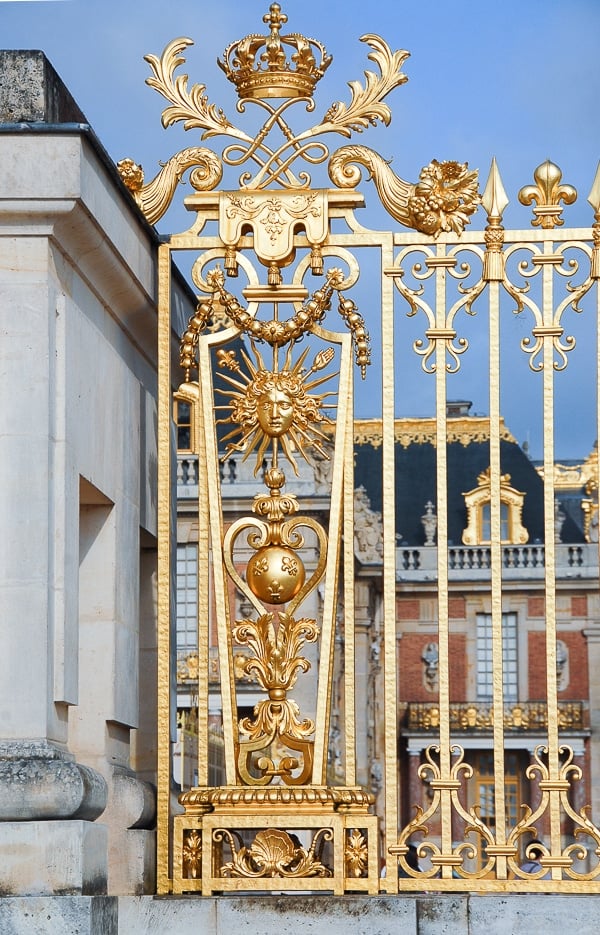 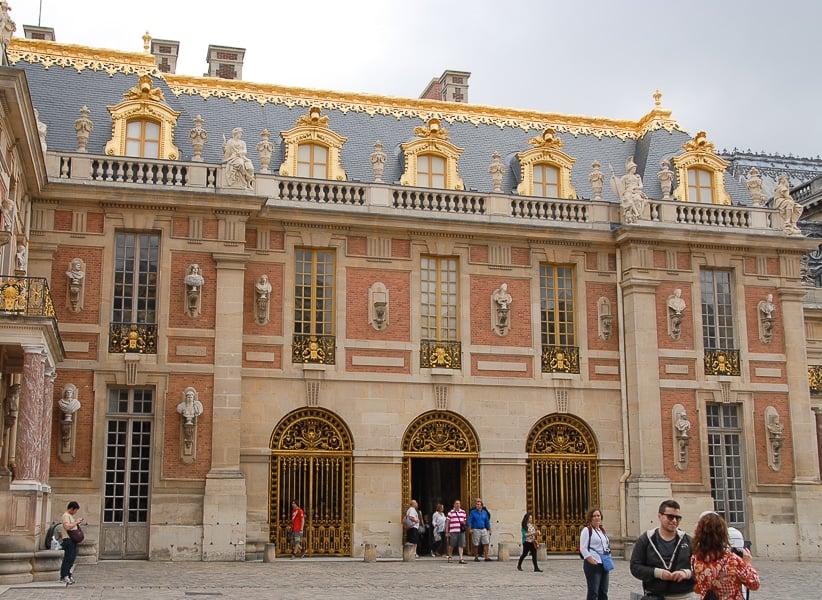 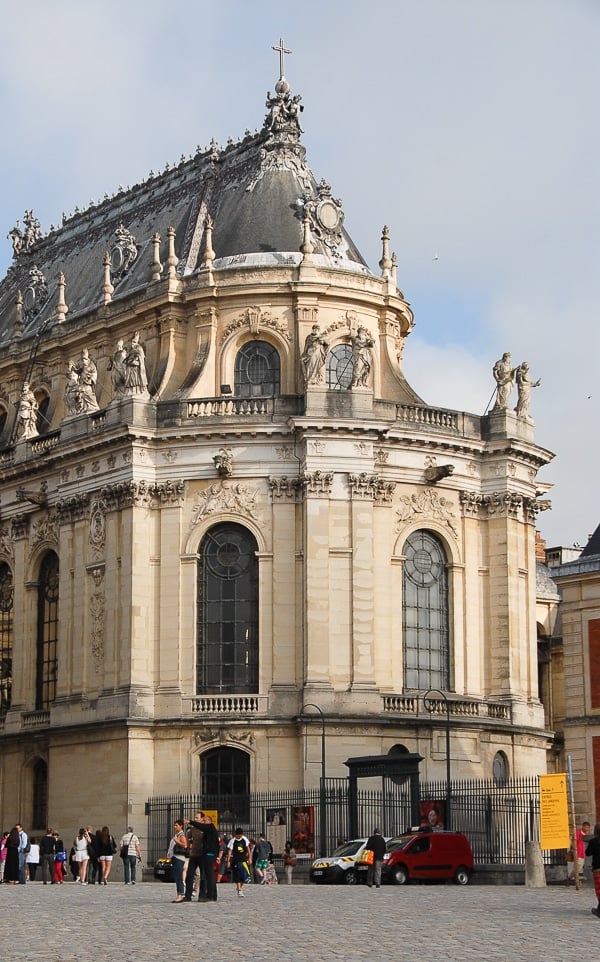 Louis XIV was responsible for the building of the actual palace, which he did with panache and sparing little expense by the look of it. The palace is comprised of 700 rooms, a small subset of which are available to tour when visiting Versailles. A self-tour allows exploration of many of the bedrooms and staterooms (including the Grand Apartments of the King and Queen), ballrooms and famed Hall of Mirrors. Louis XIV had this central salon built for use by family and court, as well as activities of state; as an example, the treaty to end WWI was signed in the Hall of Mirrors. It adjoined the royal apartments. The most notable feature are the 17 arched mirrors which face identical arch windows looking out to the estate gardens. The elaborately painted ceilings are made all the more breathtaking by 17 large chandeliers and 26 smaller ones made of silver. The hall is exquisite in every detail and a precious example of art, architecture and wealth that I do not believe the world will see again. 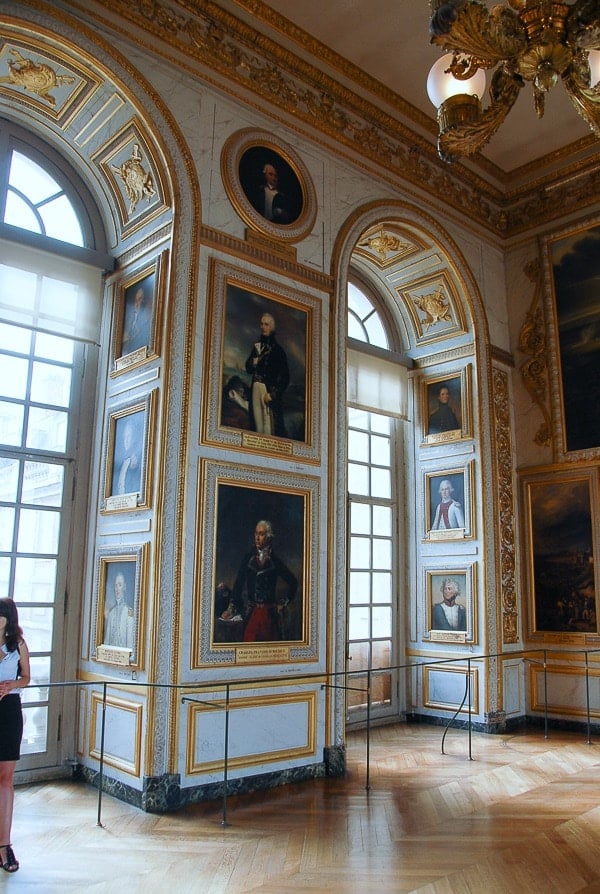 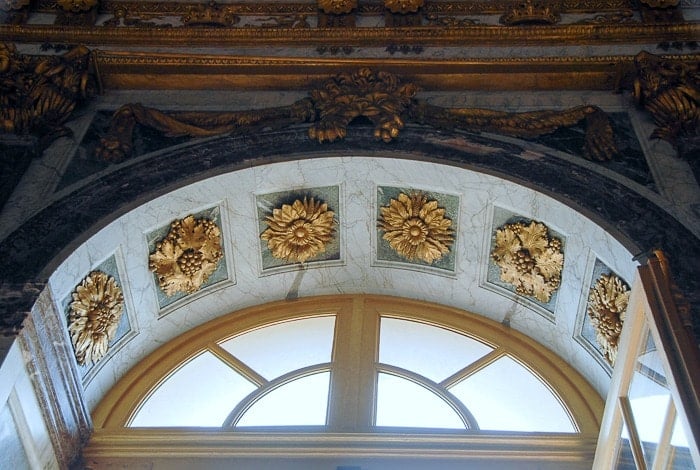 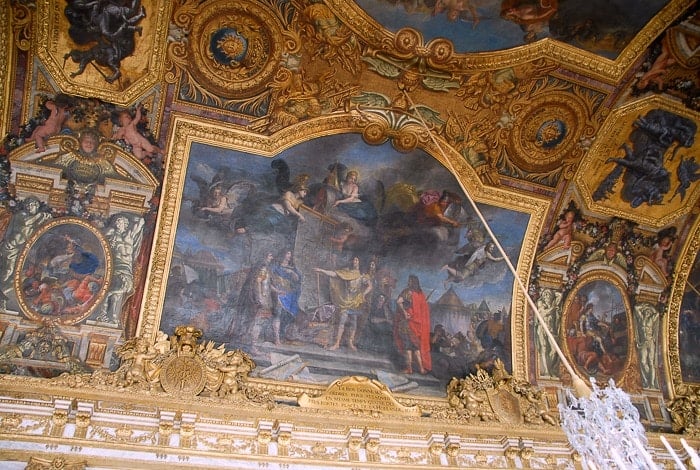 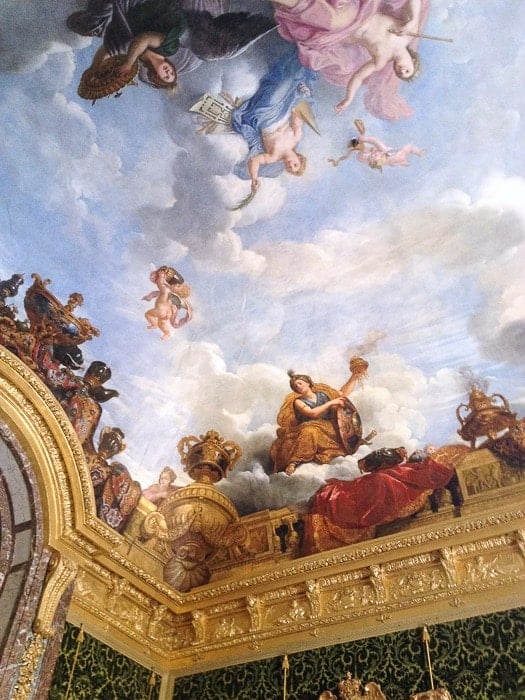 As glorious as is the palace, the gardens only further convey the grandiose nature of the property. Before arriving at Versailles, I naively imagined ‘the gardens’ would be an impressive example of well executed topiary, sculpted hedging and native species; they are a bit more! To experience the gardens one should allot as much if not more time than planned for touring the palace. The gardens, which took forty years to complete, are an extraordinary compilation of classic French gardens, wooded areas, over 50 fountains, bronze statuary, marble sculpture spanning over 800 hectares of land. Louis XIV felt the details of the gardens were as important as those of the palace and it shows. The Grand Canal (1,670 meters long) offers a chance to rent row boats to laze away an afternoon and return for a bite at one of the small cafes on the shore. Trivia fact:  the Reflecting Pool on the National Mall in Washington D.C. was modeled after The Grand Canal. 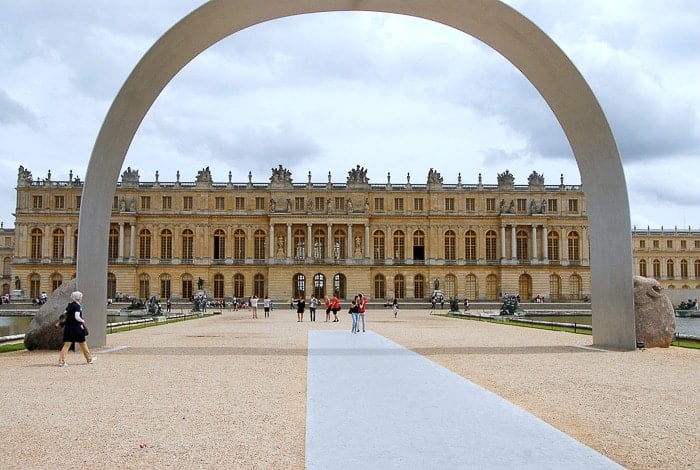 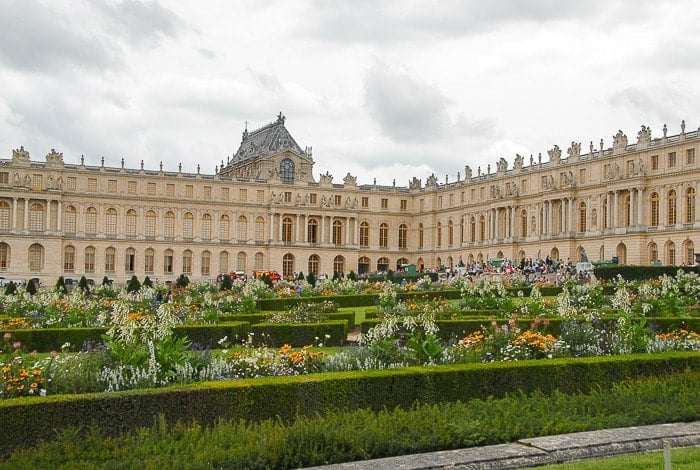 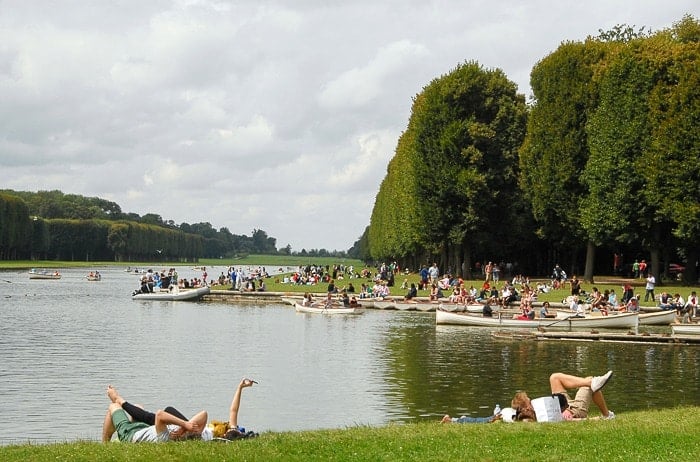 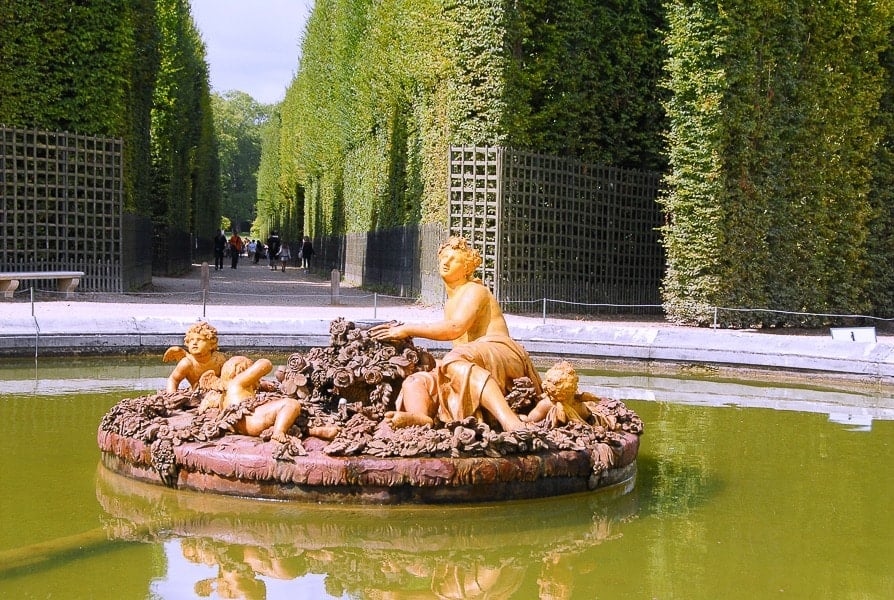 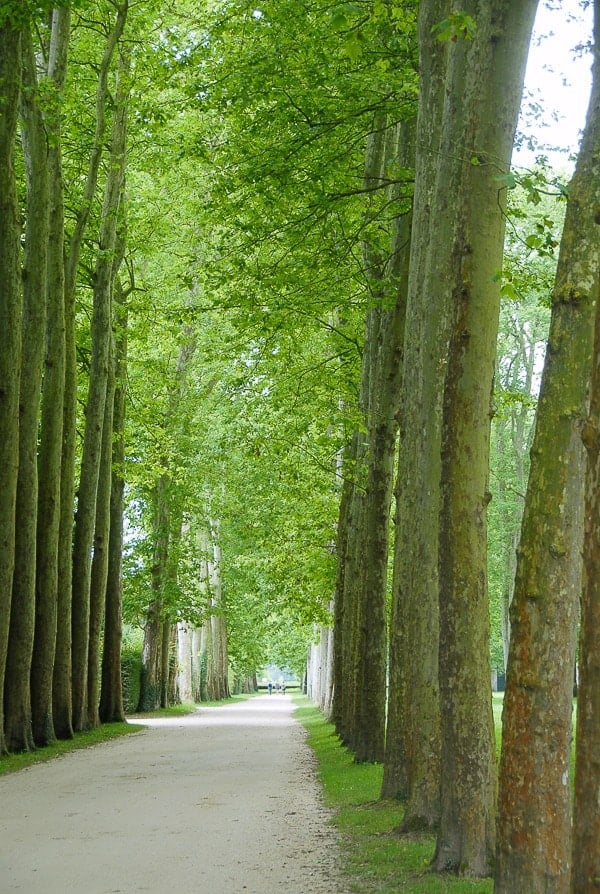 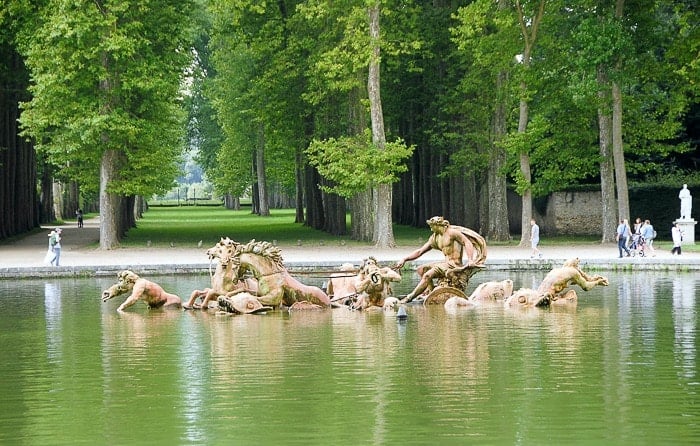 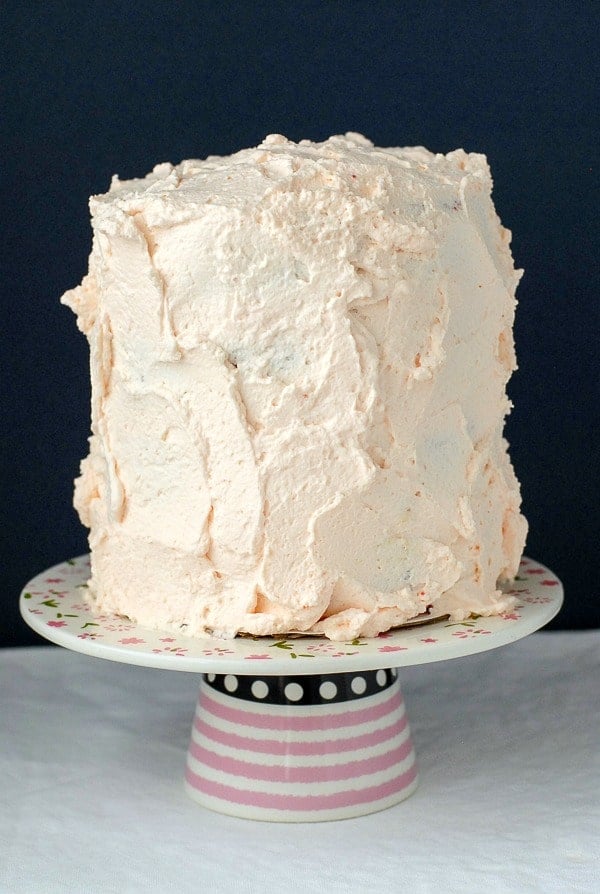 When touring the Palace de Versailles I found myself somewhat saturated with all things Louis. My impression was Louis XIV was a Bon Vivant with rich taste and a good healthy sense of self-appreciation. Each room in the palace bears a signature of one of the Louis’s in the form of a painting or statue. After the deep, rich tones of the palace rooms I was uplifted to come upon the bedchamber of Marie-Antoinette which was a beguiling pink floral. I truly became enchanted by her story (and her seeming obsession with pink) to the point of coming back to the U.S. to watch Sofia Coppola’s movie ‘Marie-Antoinette’, which is all shot at Versailles and at the Petit Trianon.

As an homage to Marie-Antoinette, the nearly child bride of introverted teen Louis XVI, for her love of pink, her penchant for elaborate entertaining and the phrase which made her famous (though it is said she actually never declared ‘Let them eat cake’), I have made a cake in her honor. A blazing pink Rose-flavored cake, filled with Pistachio Cream and eccentrically iced with Whipped Cream frosting tinted an oh-so-subtle shade of pink. The cake layers themselves? Not so subtle. I believe Marie-Antoinette would appreciate the shameless pink cake accented by unexpected green layer in between. The cake is also gluten-free. 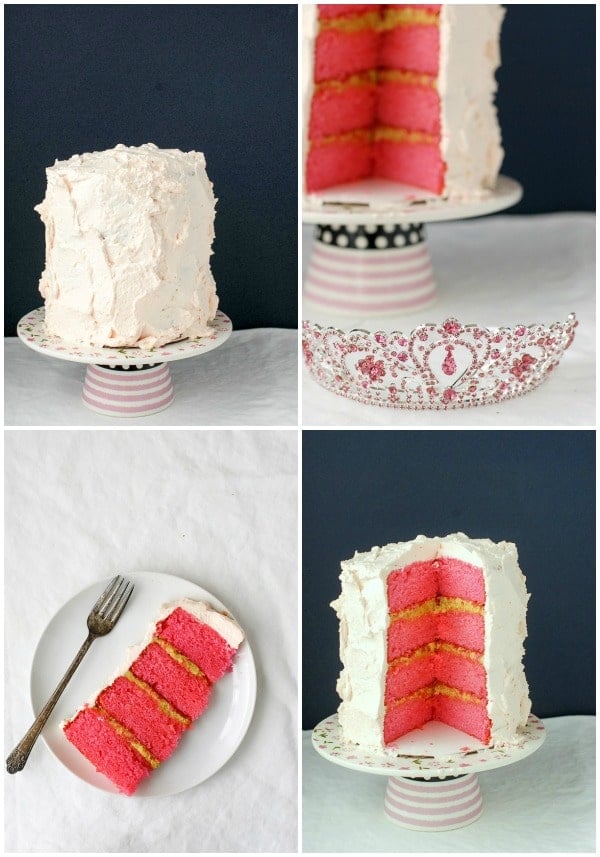 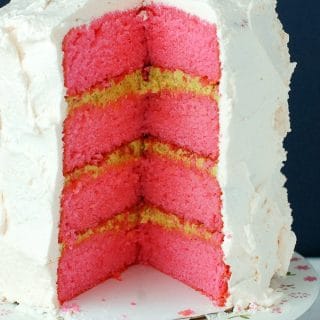 My muse for this cake was absolutely Marie-Antoinette. Her adoration of all things pink, living in Versailles which was so opulent and in a time that was decadent and somewhat over the top in the face of the social downfall happening around her. She is of course known for the famous phrase ‘let them eat cake’, which she apparently did not say, but meaning the poor and starving in France could eat bread while she lived the high life. In that spirit this cake is eccentric with four 6-inch layers of unexpected pink Rose-flavored cake, filled with Pistachio Cream and sculpted Whipped Cream Frosting. Two layers of cake may not have been enough for Marie-Antoinette, but may be plenty for your needs and if so halve the recipe. The pink coloring is optional; it may be turned down a notch or not used at all. I personally love natural vegetable food coloring however it would not have been able to deliver the ‘wow’ of this cake but could be used instead.
5 from 1 vote
Print Save Recipe Recipe Saved! Pin Rate
Course: Dessert
Cuisine: American
Prep Time: 40 minutes
Cook Time: 30 minutes
Total Time: 1 hour 30 minutes
Servings: 16 -20 four-layer cake slices
Calories: 402kcal
Author: Toni Dash
Prevent your screen from going dark

Ingredients for the Rose-Lime Cake:

Instructions for the Rose Cake:

*Raw Pistachios can be difficult to find but are available in larger stores carrying bulk nuts such as Whole Foods. If the skins remain on the pistachios the color of the filling will be tinged a brownish color, more of an ripe avocado shade. To keep the pistachios bright green, the skins need to be removed by scraping them off or lightly toasting them in a 350 degree oven for about 5-10 minutes and rubbing them off with a kitchen towel. Be careful not to toast them to the point of browning which will change their flavor. Blanching is not recommended for this recipe as the pistachios loose their flavor. 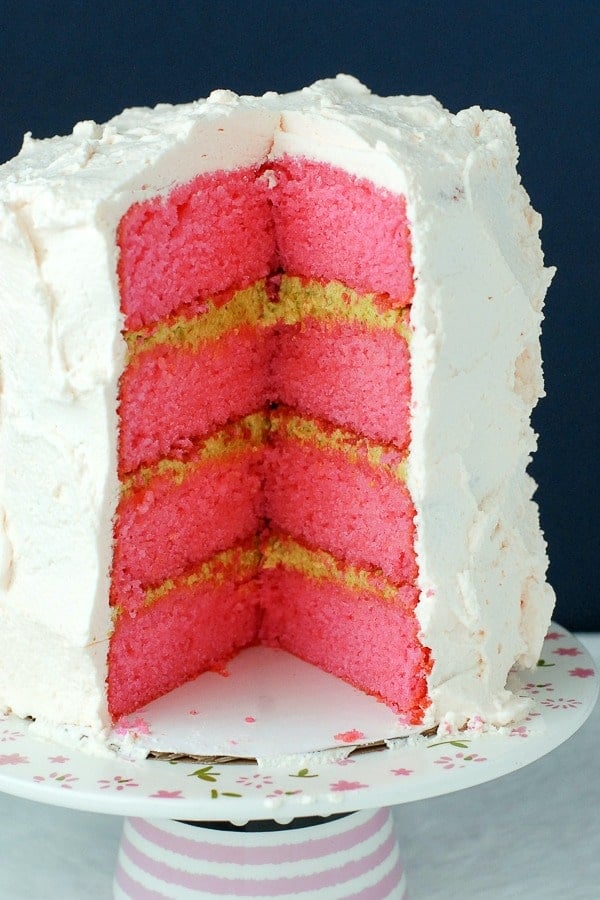 Lastly near Marie-Antoinette’s estate is the Grand Trianon, built by Louis the XIV to escape the court of Versailles with his mistress, Madame de Montespan. The most distinct feature of the Grand Trianon are the variegated pink marble columns outside facing an immaculately geometrical French garden. The courtyard constantly housed tens of thousands of potted fragrant flowers, which were said to be often rotated daily to change the colors or scents. The Grand Trianon has been repurposed and redecorated multiple times by famed figures such as Napoleon Bonaparte and Charles de Gaulle. 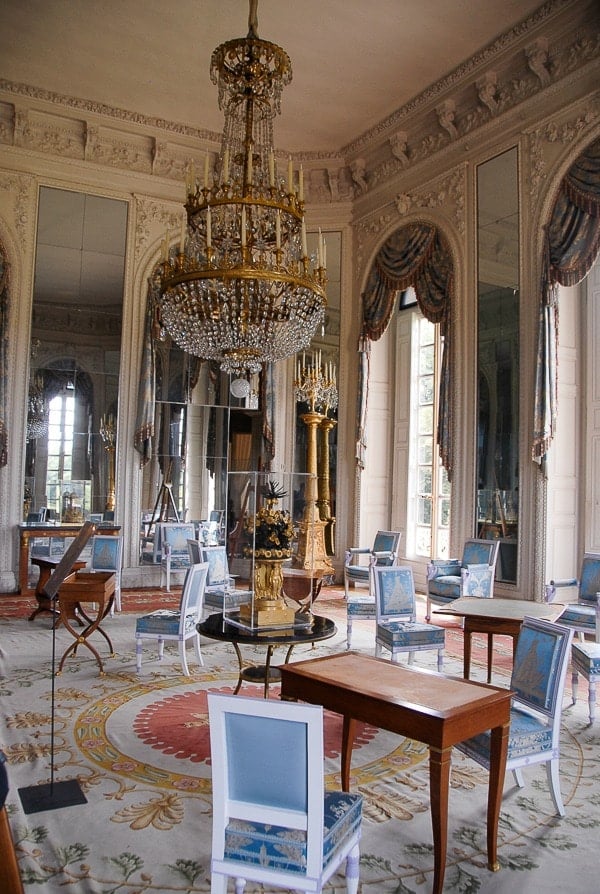 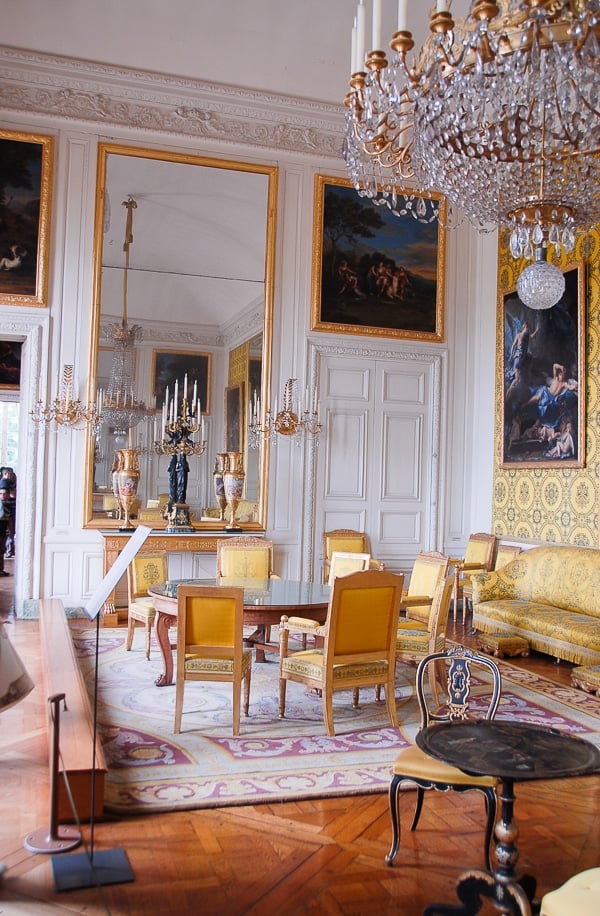 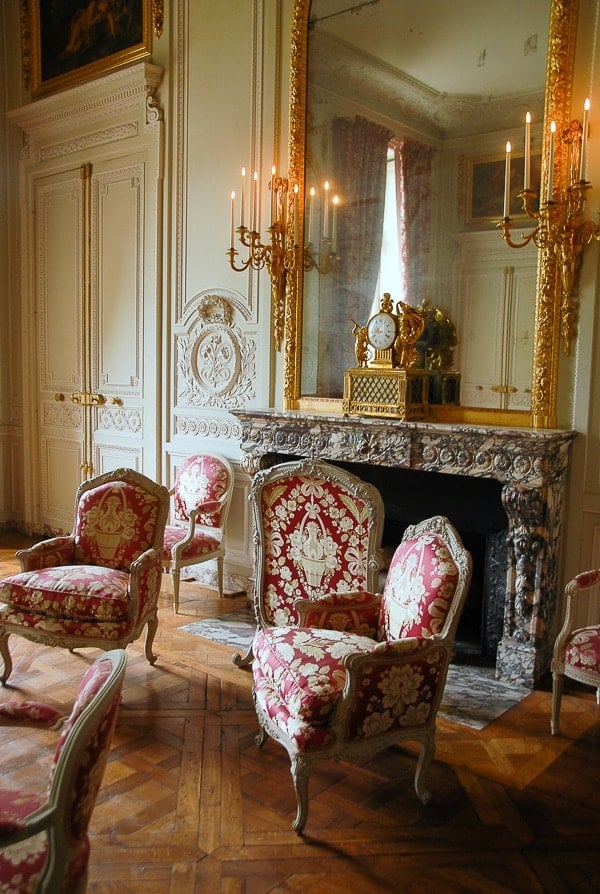 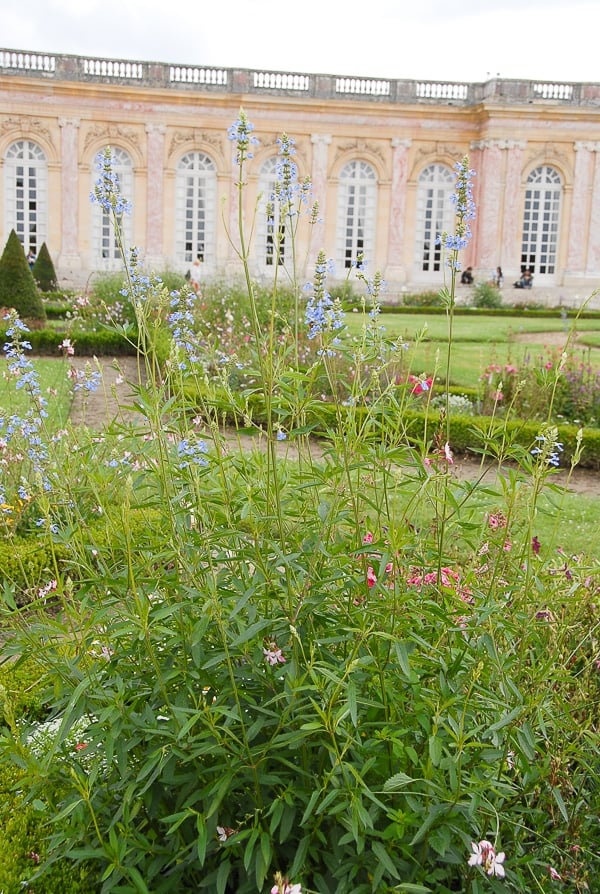 It is no surprise the Château de Versailles has been on UNESCO’s World Heritage list since 1979. It is a property steeped in history, scintillating human drama and intrigue, as well as is a wonder of art and architecture. It is magnificent and a sight all should visit if given the opportunity. 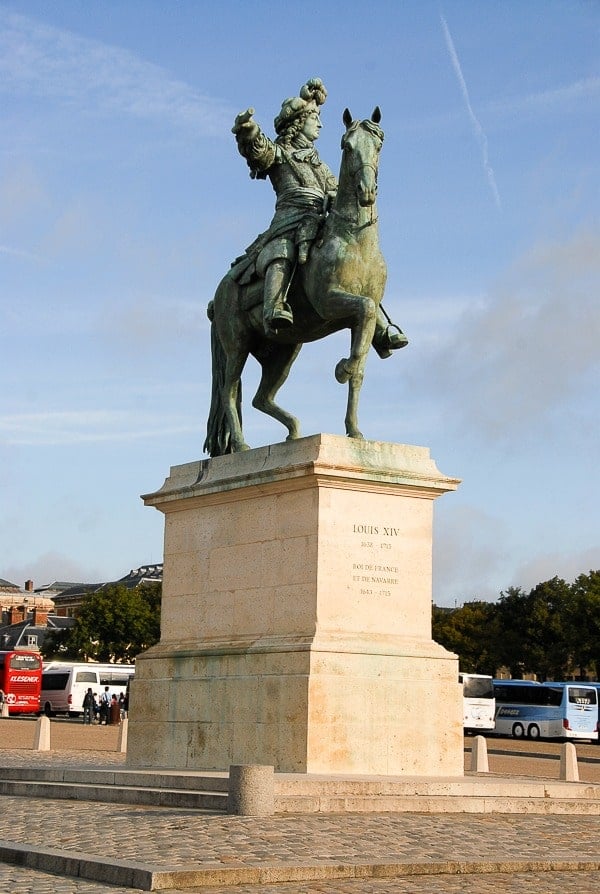 Approximately a 30 minute train ride from Paris, one should plan for an all-day outing. Plan to catch the RER C train by 8 a.m. to allow time to get to Versailles before the crowds gather. Exit at the Versailles-Rive Gauche station.

Versailles, the palace and gardens (each separate admission) are covered under the Paris Museum Pass. Entry to Versailles can be very crowded especially in the summer making arriving up to an hour prior to opening key to avoid massive crowds inside the palace. The property sees one million tourists per year; it is very popular.

The property has a number of GPS golf carts for hourly rental (30 Euros per hours) to explore the gardens. We chose to do this and it was perfect. Carts are rented on a first-come-first-serve basis and there can be a short wait until a cart is returned. The rental fee is assessed once the cart is returned. It allowed us to cover a great deal of the grounds and far more than we would have been able to on foot. When stopping at attractions like either of the Trianons or the Grand Canal, park the cart, tour as much as you wish then drive to the next area.

In addition to the palace and gardens, fountain water shows are scheduled on specific days. When the shows are playing an additional entry fee may be required for the gardens. To learn more about the shows or dates here.

Tips from Chateau de Versailles on Best Times to Visit and more.