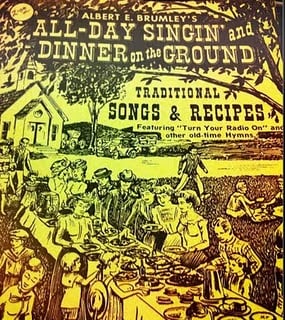 Fellow food blogger Christianna, author of Burwell General Store, decided to start a recipe innovation and swap, inspired by an old hymnal containing recipes she uncovered at the Tanque Verde Swap Meet in Tucson, and kindly invited me to join in.  Let’s be clear, this is a Foodie Recipe Swap.  It’s actually a Foodie redo and swap paying homage to the spirit of the original recipe.  We had rules:
1.      To use the original recipe for inspiration and change at least three things about it to make our own creation.
2.      ‘Go crazy with innovation’.  Must stick to the spirit of the recipe but all else is fair game.
3.      Prepare a blog post, cross referencing other participant’s blogs at a designated time and date.
4.      Have fun!
I was frightened and titillated actually when she asked if I would do it.  I WANTED to do it.  I want to be that knowledgeable cook who effortlessly whips up haute cuisine while never losing eye contact or the stream of conversation in the making.  I did create my own Gingerbread Cookie recipe gosh darn it, I can Top Chef my way through this too. 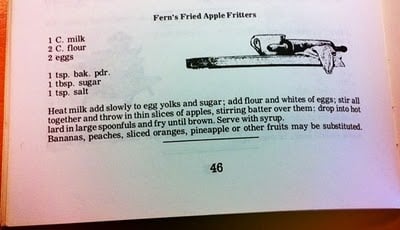 When I got the recipe, Fern’s Apple Fritters, I felt mixed.  I was glad for the apple part.  I found when I asked for beet recipes in a prior post to conquer my deep seeded disdain for them, the only thing worse than the dirty taste of the beets for me was having to buy out of season and non-local ingredients.  It really chapped my hide.  Apples ARE in season.  Have large boxes of them stored everywhere.   I felt relieved.
As I considered what angle I wanted to pursue, I found myself instead drifting off thinking about Fern.   Fern from whence the Apple Fritters came.  Fern in the hymnal.  Was she a church going woman?  Did she really WANT to fry her fritters in lard or was that all that was available?   What would Fern and Michael Pollan speak about at a dinner party were I to host to celebrate the remake of her Apple Fritters?
So for extra credit I immediately decided Fern needed a cocktail inspired by her lard-laden fritters.   If nothing else it will make my channeling of her vision into modern day easier for ME.  I think Fern, once assuring herself no one was at home would turn on some moody jazz on the crackling radio, pull out a hidden pack of cigarettes that she kept in an unused pitcher on the highest shelf of her cupboard and shake herself up an Apple Martini which she’d slowly sip while making up her fritters and other pot luck’y dishes for the Church Social.  Truth be told?  I think she’d put on blood red lipstick and high heels too; but only if no one was at home.
Now as lovely as Fern’s Fritters undoubtedly were, I’ve renovated them into mini Apple Pork Empanadas (gluten free).  I wanted something savory and hor’s d’oeurvrey.  I was delighted with the outcome and the process.
My two cohorts in culinary reinvention have chosen Sweet Corn and Herb Hush Puppies with a Lemon Parsley Greek Yogurt dipping sauce (whipped up by the lovely Lindsay, blogger of Rosemarried in the enviable cuisine mecca of the northwest, Portland Oregon) and a luxe Trio of Truffle and Mushroom Fritters (the exotic, nomadic, artistic, quick witted Christianna; recipes include black and white truffles as well as a combination which must be seen to be believed and sauces!).  When revealing our dishes to each other, Christianna remarked at the different approaches.  We each stuck to one aspect of the dish and innovated the other.  So fun.  Please do check the other blogs.  All recipes will be posted on each blog by 9 a.m. PST Tuesday January 11! 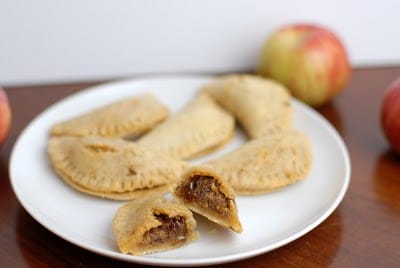 Apple and Pulled Pork mini Empanadas (gluten free)
Yield:   24 empanadas
Note:  these ingredient quantities produced the number of empanadas I hoped for with about a cup of filling left over.  You could make the dough 1 ½ times the amount listed should you wish to have more empanadas or use the filling for sandwiches or omelets!
I wanted little bites that were appetizer in stature but could comprise a tapas type meal.  Paired with the following Apple Martini recipe, these are sublime (I think even Fern would smile slyly at my update).
Empanada Dough (note: this was my flour mixture but there are shortcut substitutes below):
·         1 cup brown rice flour
·         ¼ cup sweet brown rice flour
·         ¾ cup sorghum flour
·         2/3 cup cornstartch
·         ¼ cup arrowroot starch
·         2 tablespoons tapioca flour
·         1 ½ teaspoon xanthan gum
·         ½ teaspoon cinnamon
·         ¼ teaspoon ancho chili powder
·         1 teaspoon salt
·         1 stick salted butter, cold
·         1 egg
·         1/3 cup cold water
·         2 teaspoons apple cider vinegar
Substitute options:
·         Gluten Free:  If you don’t want to mix your own flour, substitute your favorite gluten-free flour blend for the first 6 ingredients in the same quantity.
·         With gluten: Substitute your preferred baking flour for the flours and starches (same quantity total) and omit the xanthan gum from the recipe.
·         ‘Don’t want to make dough’ gluten consumers: I understand you can buy empanada wrappers at the store.  Feel free to use those instead as well and if so, proceed to the filling recipe!
This essentially makes a dough similar to a pie crust dough and the recipe above makes beautiful dough!  Any of you who are gluten-free bakers will understand my enthusiasm because GF dough can be very finicky.  This was very close to a traditional wheat pie crust, with structure and no stickiness.
1.      Mix the dry ingredients.  I use my food processor with the dough attachment (see below).  You can also mix this by hand. 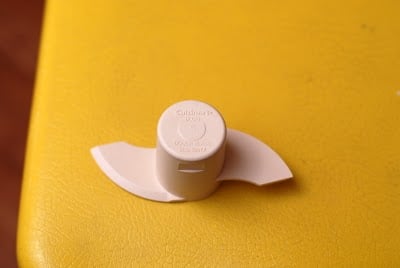 2.      Cut the stick of butter into small pieces and incorporate into the dry ingredients.  If using the food processor I found cutting the stick approximately into tablespoons and then quartering those to work well.  If doing this manually using a dough whisk works well.  The end result should be crumbly. 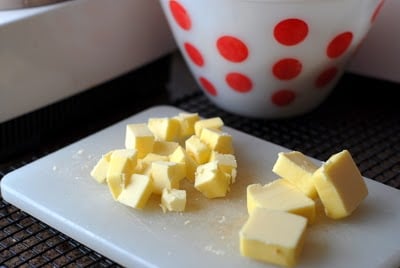 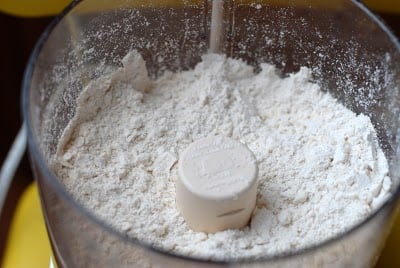 3.      In a separate small bowl, mix together the egg, and vinegar.  Add to the dry mixture in the food processor, along with the water and pulse until it has fully combined.   Remove from the food processor, form into a ball, wrap in plastic wrap and place in the refrigerator until chilled (about 30 minutes). 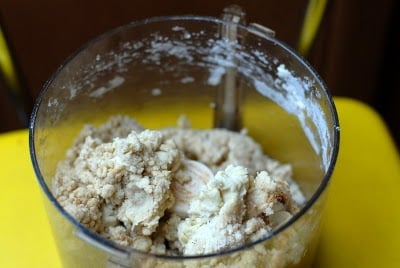 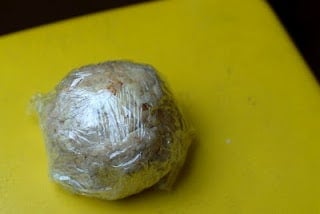 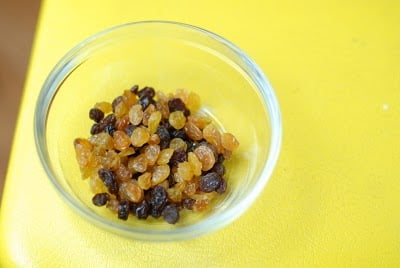 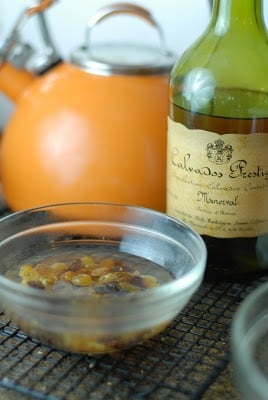 2.      Heat a skillet to medium heat and melt 1 tablespoon butter.  Add the shallots and apples and sauté until beginning to caramelize (soften and brown) about 5 minutes. 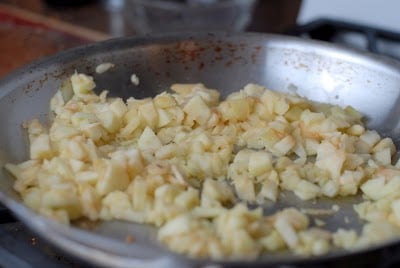 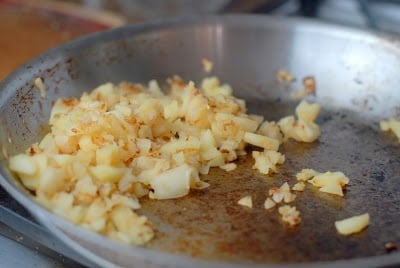 3.      Add the pulled pork to the apple/shallot mixture and still to combine.
4.      Drain the raisins and add to the skillet mixture.  Stir to combine.
5.      Add the cinnamon, chili powder and salt.  Stir to combine.
6.      Remove mixture from skillet.  Add 2 tablespoons Calvados and 1 tablespoon apple cider vinegar to the hot skillet to deglaze the pan.  Turn heat up to medium high and scrape the pan drippings off the bottom of the skillet.  Add the apple/pork mixture back to the pan, stir with the drippings for 2 minutes to combine and remove from the heat. 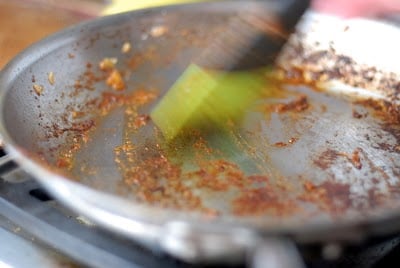 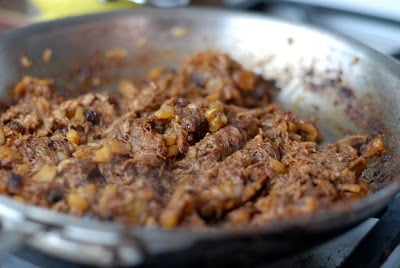 Empanada Assembly
1.      Preheat oven to 300 degrees and place rack in the middle of the oven.
2.       Remove the dough from the refrigerator.  Split it into two pieces for ease of rolling, and roll it out onto a lightly floured surface.  Roll to about 1/8th inch thick.  Using a round cookie cutter or the mouth of a glass, cut out circles about 3-4 inches in diameter. 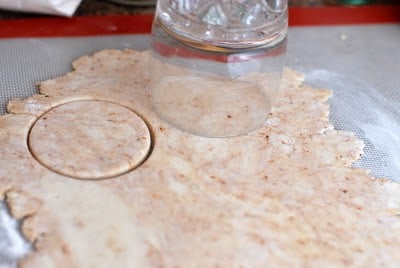 3.      Lightly roll the circles out just a bit more to make them slightly thinner (about 4 to 4 and ½ inch in diameter). 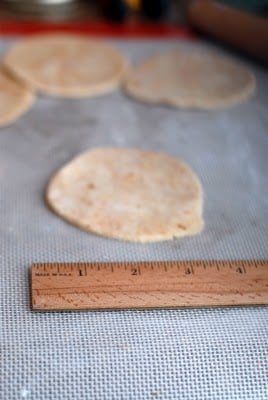 4.      These will be folded in half to make the empanadas.  Take 1 and ½ teaspoons of the filling and place in the middle of the dough circle. 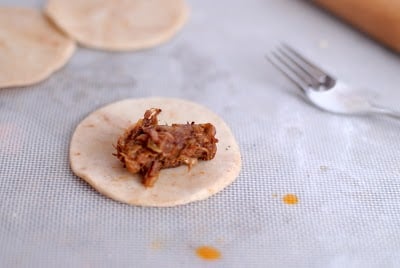 5.      Moisten your finger with water and run it around ½ of the wrapper.  This provides the moisture to seal the empanada pocket.  Fold over the wrapper and lightly press together with the moistened side. 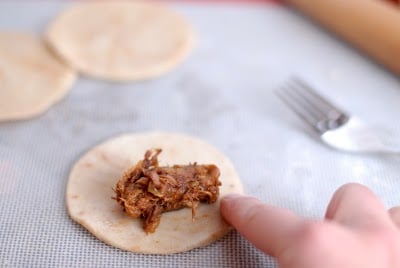 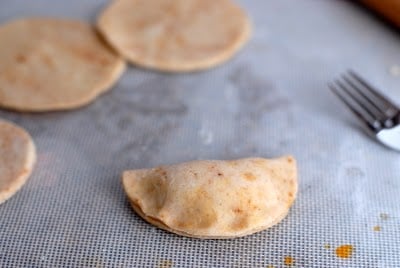 6.      Using the bottom of fork tines, press gently around the round edge of the closed wrapper. 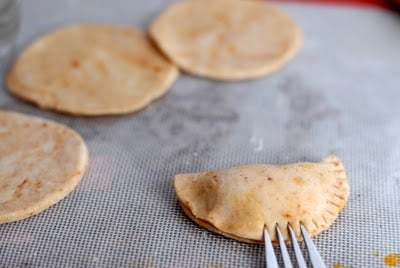 7.      Whisk egg with 1 tablespoon of water for an egg glaze.  Brush on the top of the empanadas before putting them into the oven. 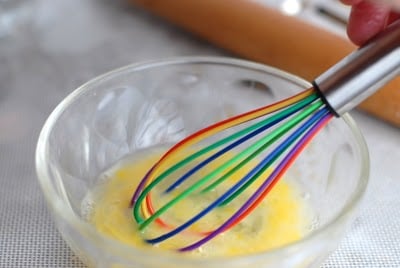 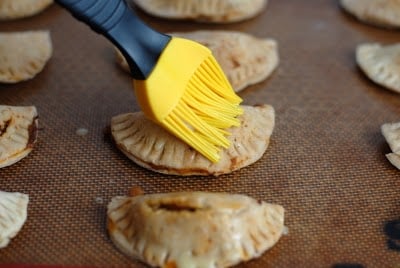 8.      Bake for 25 minutes.  Cool slightly and devour!  These are best eaten fresh from the oven.  I did chill some to eat later and found them to become a bit stiff.  About 10 seconds in the microwave took care of it but they are at their best right out of the oven! 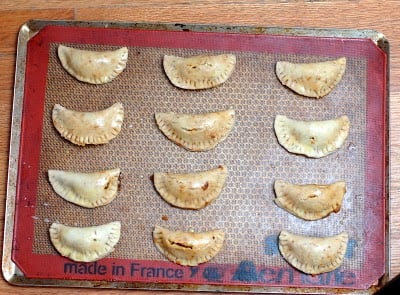 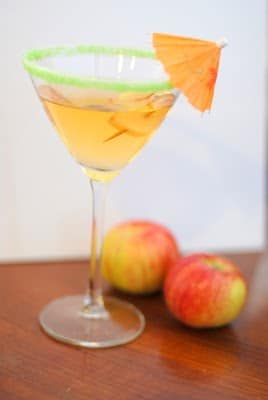 The combination of this martini and empanadas could not be better.  I highly recommend it (enhanced by wearing high heels and red lipstick; mainly thinking of women but men, make your own choice).  I wonder what Fern would think…. 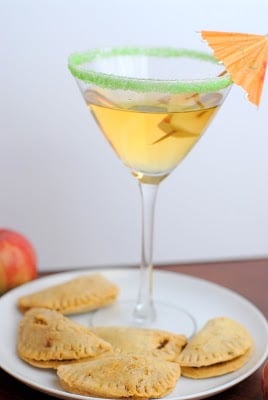 Be on the lookout for the next round of the Vintage Recipe Redo and Swap!