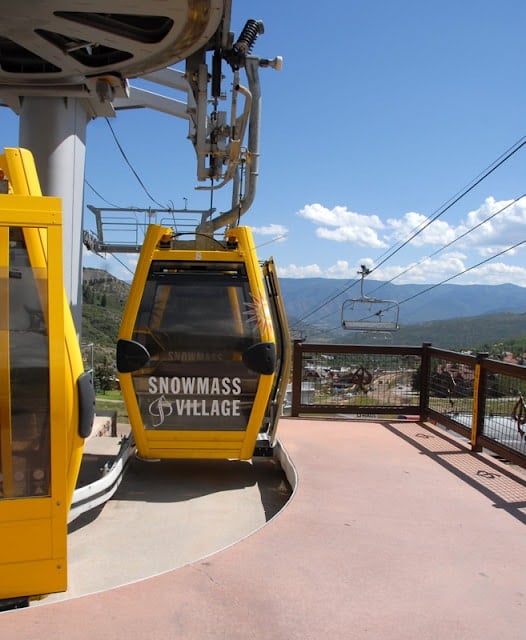 With reality TV becoming such a pop culture cornerstone, the lines of chef and celebrity have become significantly blurred. Rightly so as anyone who can take a box of disparate food items and present a cogent dish in 23.5 seconds with TV cameras rolling deserves the fan accolades worthy of a traditional movie star in my view.

One such local star is Colorado’s own Chef Jenna Johansen. We locals have tracked her rise through various ventures and restaurants including Dish in Vail (of which she is the former co owner and  Executive Chef). The introduction to Jenna has spread much more broadly this year with her participation on Bravo TV’s recent culinary adventure show ‘Around the World in 80 Plates’. Jenna proved a fierce competitor, speaking the language of every country visited (flawlessly), producing food always acknowledged in the top dishes weekly and orchestrating her team assignments with clear vision and direct ‘no drama’ engagements with her teammates. Her ‘force to be reckoned with’ execution was eventually met with demise when a fellow teammate put in the position of breaking an elimination tie chose to excuse her from the competition stating the threat she posed with her notable culinary prowess as well as ability to easily fit into any challenge or cultural situation thrown at her. 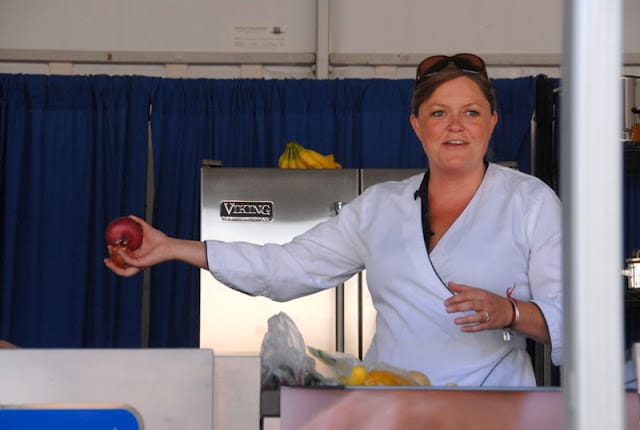 In a more stressful moment, we the audience see a teary Jenna describe her fiancé Mark Denittis, a charcuterie chef and clearly her personal rock. He lovingly proposed with a salami ring and the rest is history. As Jenna’s path has broadened more into the public domain of culinary engagement outside the traditional restaurant kitchen, so seems to be Mark’s. With the limelight charcuterie practice has assumed in the focused theatre of elevated food, Mark’s talents have taken to the public spectrum conducting various demonstrations at events and festivals in compliment to his long history in the educational domain. The pair have developed a clear synergy each supporting the other as ‘sous chef’ while the other takes center stage. 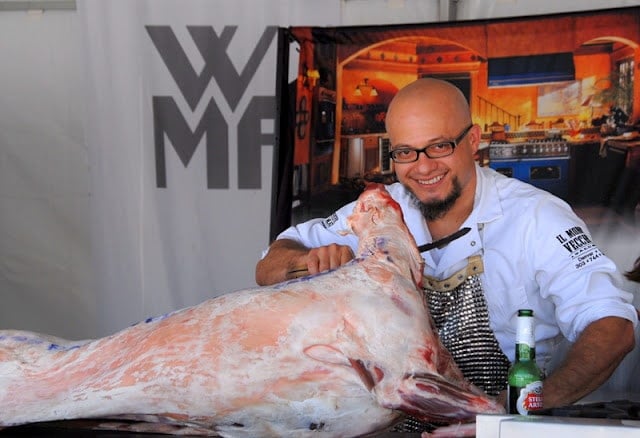 The opportunity to meet and speak with both Jenna and Mark was my kick off to this year’s Snowmass Culinary and Arts Festival. Jenna and I had had a near miss a few months back when I was to attend a dinner she was the chef for at Studio F in Denver. At the last minute I was unable to attend but it forged a connection that would finally result in meeting live in Snowmass. I watched ’80 Plates’ religiously admiring her direct honestly and avoidance of the cameo mudslinging that sadly she was subject to, often being called ‘annoying’. Of course whenever someone is recognized as competent with a superior skill set, I suppose it would be annoying to co-competitors. I was excited to finally meet in person.

I also was excited to meet Mark as our paths had crossed too. My long time CSA farm in Boulder, Cure Organic Farm, has been one of a select few raising a heritage breed hog, the Mangalitsa. They are only one or two in the U.S. producing small batch charcuterie and it is Mark who prepares the cuts and ages them to perfection. It is really at Mark’s hand that I’ve become completely addicted to Lardo.

I met up with Jenna and Mark at the Snowmass Culinary and Arts Festival today as they were getting ready to each conduct a demo kicking off the two day festival. Mark would break down an entire Colorado lamb carcass. He wanted to suspend the carcass from the rafters by a respectable sized chain and carve mid air but unfortunately the food powers that be were twitchy about it; nonetheless Mark’s natural showmanship was not dampened by the denial. His enthusiasm is contagious and I left feeling I’d look pretty darn good in a culinary chain-mail apron and that I might want to try my hand at some butchering. 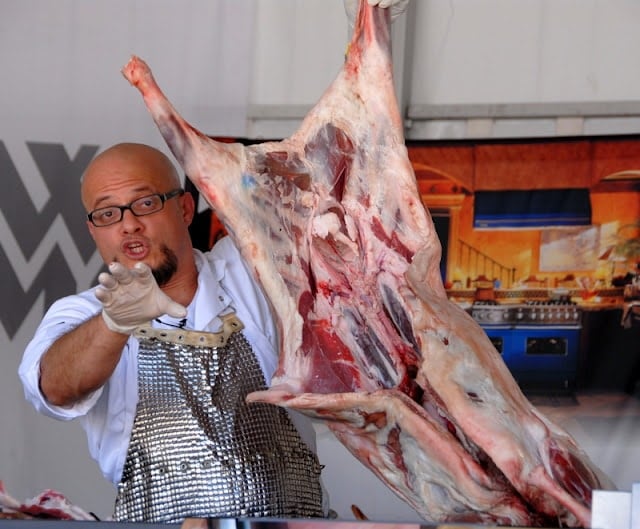 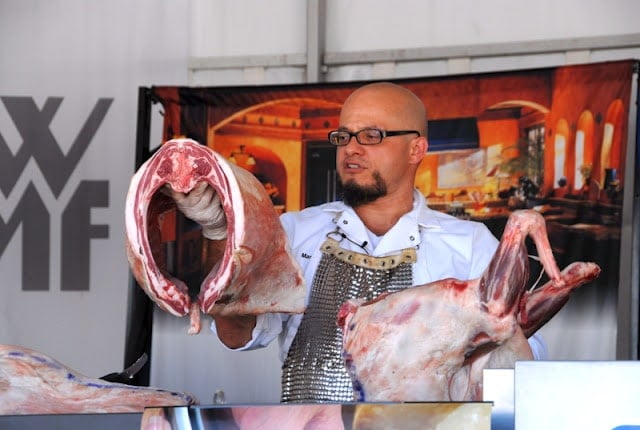 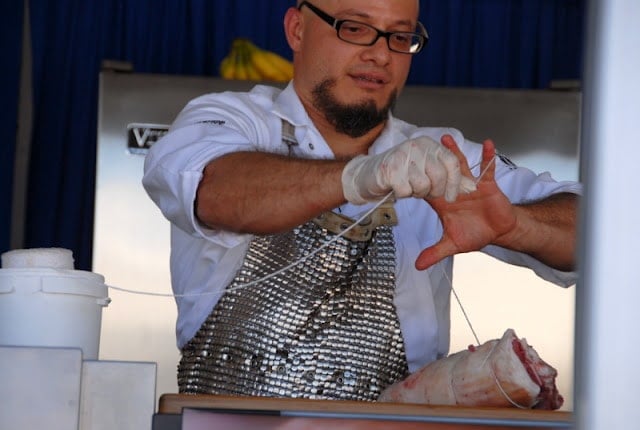 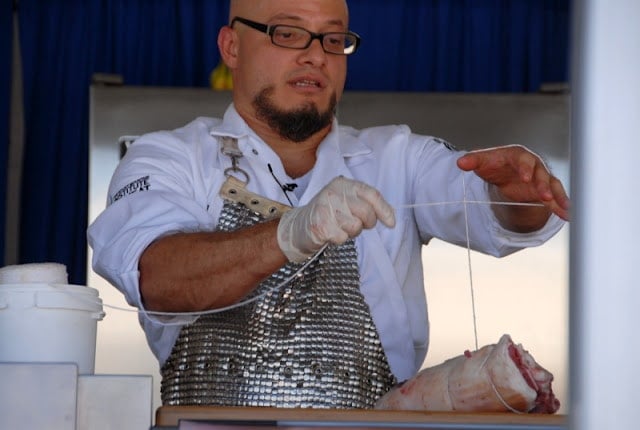 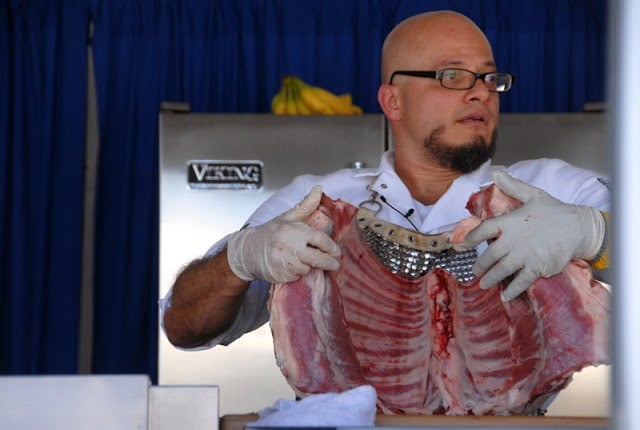 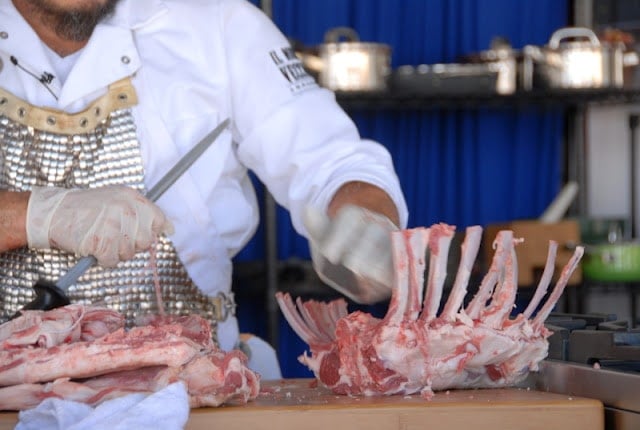 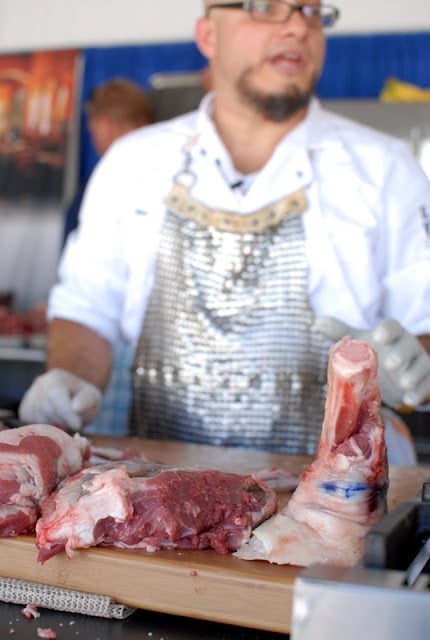 In all reality Mark made it look effortless and was expert at discussing equivalent cuts of beef and pork making the demo each a fascinating exhibition of his carving artistry as well as extremely educational. Not a surprise in learning he’s been prevalent in the culinary education sector for years as an instructor for Johnson and Wales, 1 of 10 Top Rising Stars in the Meat Processing industry (2007), now maintains his own educational program of the Rocky Mountain Institute of Meat all in addition to his thriving Salumeria, Il Mondo Vecchio (incidentally the state’s only USDA inspected facility). 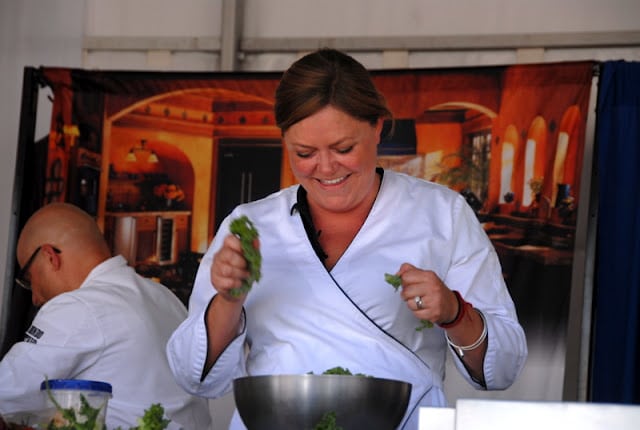 Following Mark, Jenna took the stage to make simple, delicious seasonal dishes of Kale Chips, Pickled Beet Gazpacho (recipe below) and Corn Salsa. She’s easy, friendly and funny engaging naturally with the crowd as I suspect she would with good friends. Jenna is full of great tips to make things easy. Her devotion to local and seasonal produce is evident as well. I felt I was looking at my twin when she paused mid recipe to admire the beauty of a sliced beet, the circular pattern, the luscious color. I too find these simple recognitions in the food realm undyingly exciting and it made me like her all the more.

I could not sign off about Jenna without mention of the 80 Plates experience. When Q & A time came for the demo audience, cooking questions lead but then the reality TV quickly followed. Each Jenna and Gary Walker (fellow chef castmate and friend of Jenna’s who popped into the festival today) expressed it was an extraordinary opportunity to travel the world (a new country every 4 days) and have the experiences they did. Jenna’s favorite country was Italy; she felt at home there and flourished with her linguistic skills and in meeting her live I’m sure her warm demonstrative nature meshed very naturally there. In terms of future TV, she’d love her own show. I personally think we may not have seen the end of her in reality TV as grueling as the experience looks to be from the outside. She certainly makes great food and after meeting her and experiencing her infectious charisma, I know people will want to see more of her however they can get her.

The evening of the festival offered two additional events. At the Viceroy Hotel Chef Will Nolan was serving a 5 course lamb dinner using the lamb Chef Mark Denittis had prepared. Chef Richard Sandoval’s restaurant Venga Venga hosted a Tequila and Tacos evening. I love everything I’ve eaten at Venga Venga and the ‘Father of Modern Mexican food’ delivers with flavor, ingenuity and creativity. 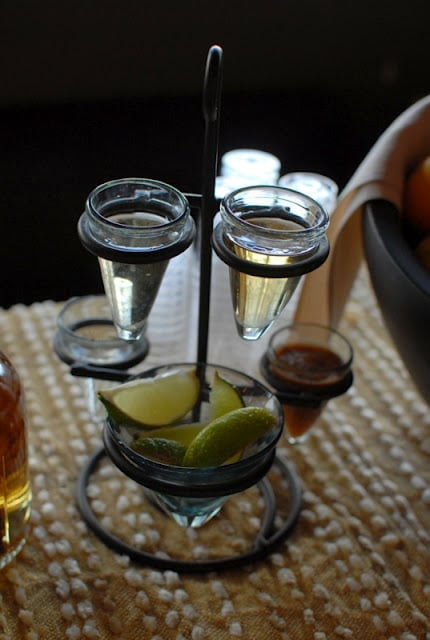 Last year I met Chef Diane Henderiks, personal chef and registered dietician. She is a vibrant, funny Jersey girl with a passion for good food and people. Diane met Chef Sandoval at Disney’s Epcot Center International Food and Wine fest and became fast friends. They plan to co-author a cookbook (to be released in 2014) featuring Chef Sandoval’s recipes and interjections from Diane whose specialty is tailoring flavorful food to be more healthy without sacrificing the appeal. 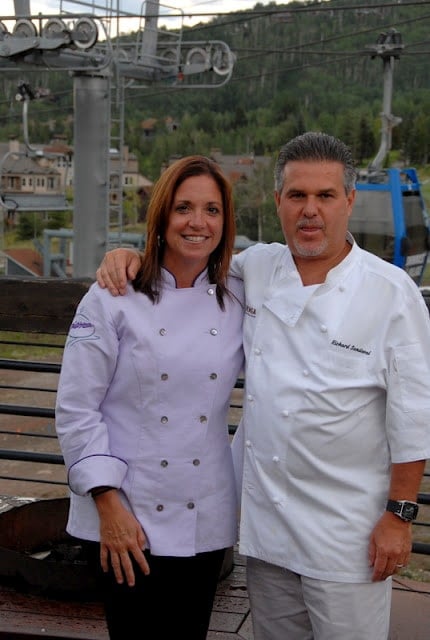 I spent a few minutes with them catching up at Venga Venga. Chef Sandoval had flown in from Shanghai for the Culinary and Arts Festival and had paired up with Diane at her demo early today. The depth of their friendship is palpable as is their chemistry; like best childhood friends. We had an amusing conversation about how opposite they are each comparing how they prepare for a demo; Chef Sandoval meticulously scouring his recipes the night before, every utensil accounted for, Diane having everything organized but as she begins to speak she shares ‘everything in her head’ including a nonsequitur about working in the garment district in New York City selling jeans which she related to the quality of salt used in cooking, all delivered in her fast-talkin’ Jersey accent. They are the festival’s other dynamic duo; an ‘odd couple’ who joyfully have found an appreciation for what each other brings to the culinary forum. They are fun to be around and I’m sure we’ll see more than a book in their collaborative future (I’m again banking on a reality TV show). Their culinary partnership is a highlight of the festival. 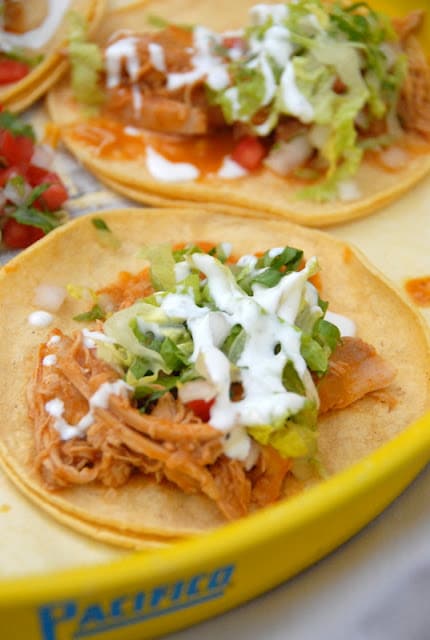 The Snowmass Culinary and Arts Festival runs through Saturday July 21 culminating in a Palette of Pairings events with notable chefs dishing up small plates thoughtfully paired with an adult beverage (wine or cocktail). More exciting demos will play out all day spanning the culinary gamut. For more info or to buy tickets to the pairing event, click here. 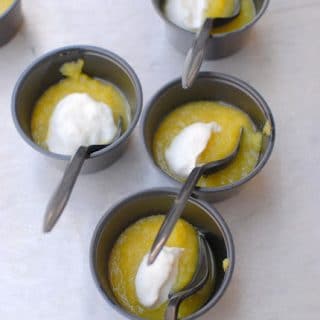 Note: this recipe is prepared over two days.