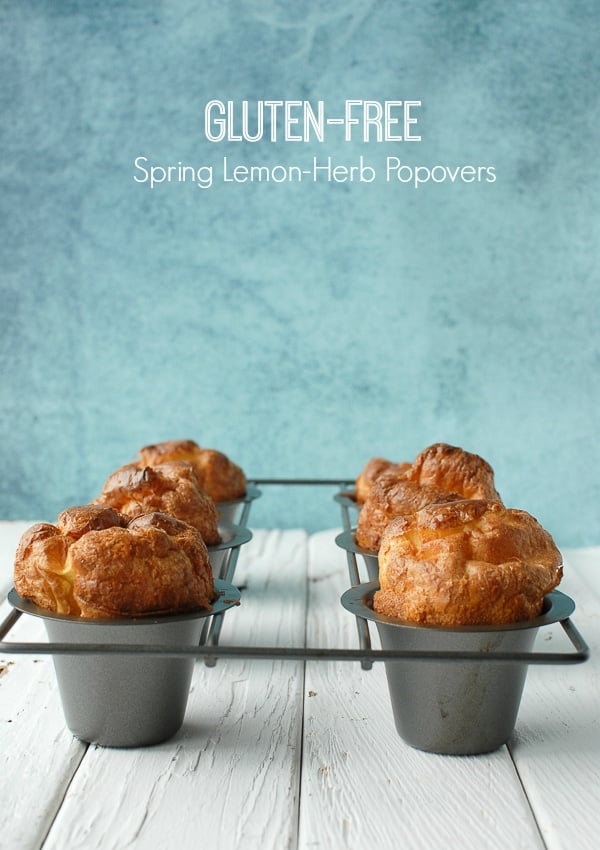 As spring approaches or settles in, I find myself thinking of lighter foods. The idea of a spring popover sprang to mind, also as a consideration for an Easter menu. I’ve never made a popover and since I’ve been gluten-free I don’t think I’ve eaten one. I do have fond memories of them at more special meals when I was a child and am fortunate to have both my Grandmother’s recipe and her cast iron popover pans. I set to work feeling my spontaneous whim would quickly yield a lovely puffed popover, I’d take a photo and call it a day. Sixteen batches later (note: at the final publication of this post I had lost track of the number of prototype batches) I have mastered a gluten-free popover, at altitude, and feel confident I could teach a PhD course about them for all I learned. 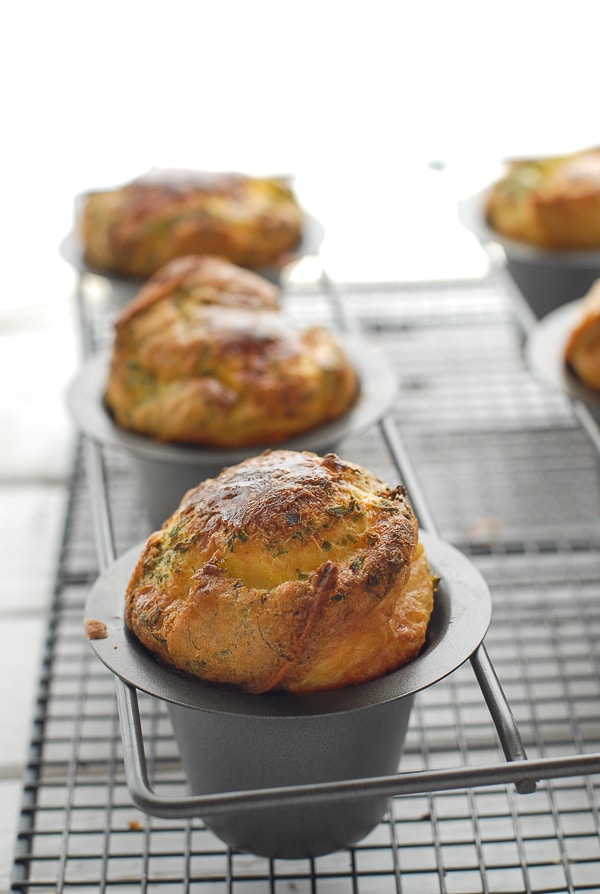 ‘Have you ever made a popover?’ I asked my home-chef husband, about 6 batches in. ‘No, I just know they are difficult’ he replied. Sadly I never got that memo and was learning on the fly. For a four ingredient recipe, popovers may be the most elusive, mercurial food I’ve ever tried to master. To make matter worse, every recipe and article I read about them presents equally conflicting information. 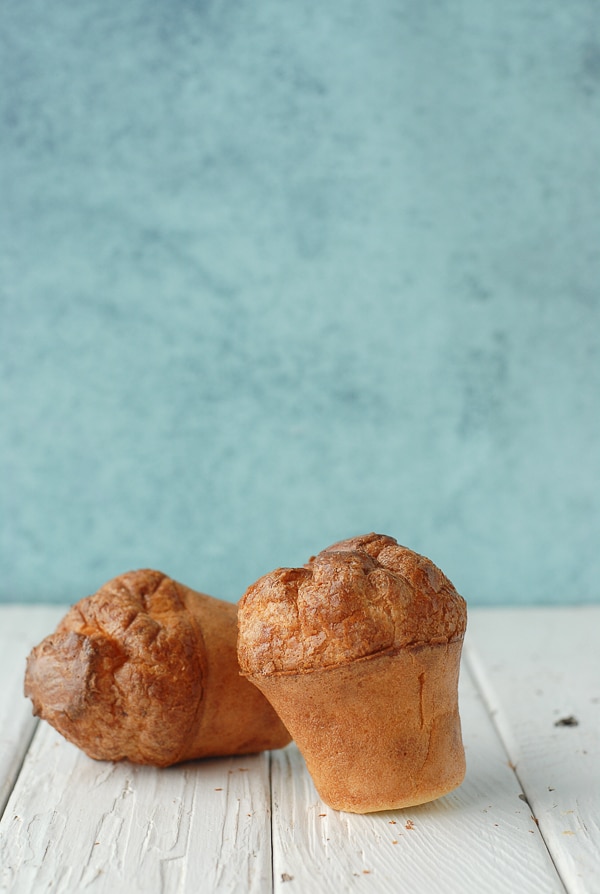 I began, naïve and excited, with my Nana’s recipe. Matching other recipes I researched afterwards, the amount of milk and flour are the same (2 cups) paired with six eggs and some salt. I did see the identical recipe on some recipe websites as I began my science sleuthing out of failure. Nana’s recipe also specifies not preheating the pans, mixing the batter and allowing it to sit for 2-3 hours stirring periodically before baking (I did not do that and read that has to do with allowing the gluten in wheat flour to relax before baking). She also advocated pricking the popovers before they are done and letting them continue to cook. I ran into that wisdom in another cookbook about 10 batches in. Not only was it a flop but I could not release the popovers from the cast iron molds despite having prepped them as instructed. I ditched the beloved vintage molds and moved on.

I will not drag you through the play-by-play of every variable I manipulated to reach a successful conclusion. Nor will I detail the deprogramming I now am forced to with our senior Labrador Retriever who is convinced that each time I go to the kitchen or remove a popover pan from the oven, it must be for his benefit. What I WILL share is that in my experience there are some key variables that were critical for my success. I often would go back to test those variables after a successful batch by doing the opposite with an additional batch to be met with failure. I’m sure the fact that I’m baking at 5,500 feet as well as with gluten-free flour entered into my attempts as well. 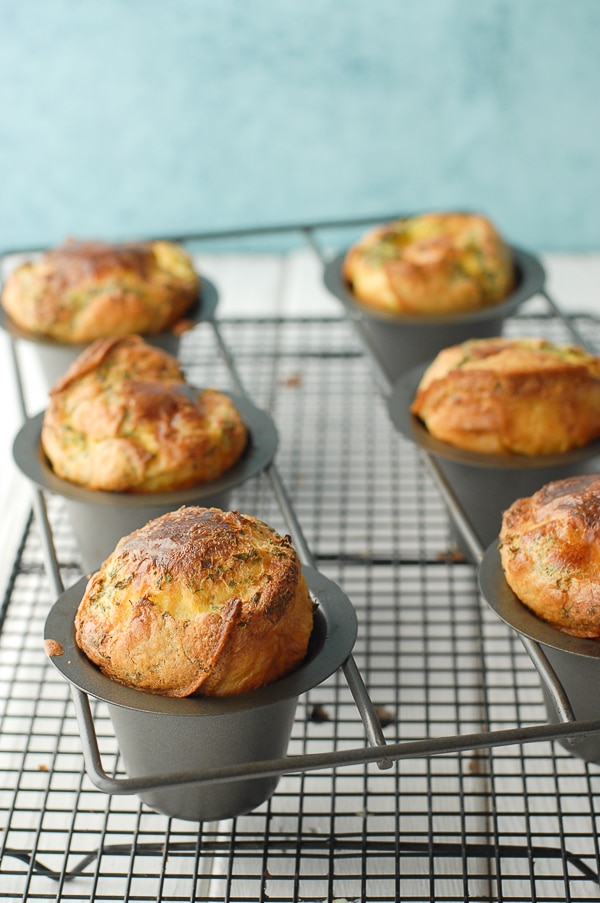 The Anatomy of a Popover:  if you have not had the chance to enjoy a popover their outside appearance does not convey fully their charm. Though looking like an inflated muffin they are almost hollow inside. The brown, crisp outer shell yields to a soft eggy lining and a custardy layer on the bottom. It is divine. They are light, airy and a fantastic addition to any meal or holiday celebration.

What I Learned About Baking Popovers: 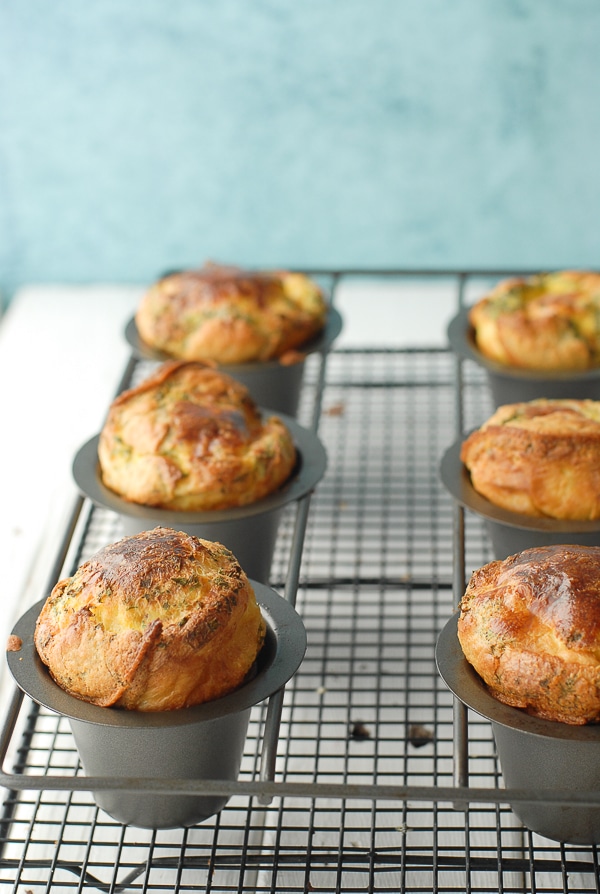 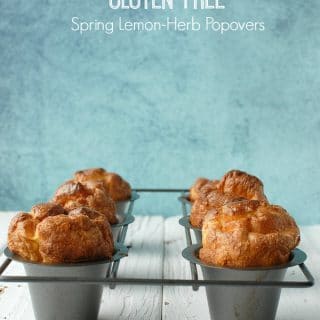 Popovers are fantastic for any time of year but their light consistency makes them a perfect partner for fresh spring herbs and lemon zest. They are magical to watch expand over the top of the popover molds forming an animated muffin shape which is light, airy and deliciously flavored. These are also gluten-free.
5 from 1 vote
Print Save Recipe Recipe Saved! Pin Rate
Course: Side Dish
Cuisine: American
Prep Time: 10 minutes
Cook Time: 40 minutes
Total Time: 50 minutes
Servings: 6 popovers
Calories: 125kcal
Author: Toni Dash
Prevent your screen from going dark

*another blend of gluten free flour may work fine but I used King Arthur’s through all my batches I used a non-stick popover pan by Chicago Metallic that was a complete game-changer in my experimentation.