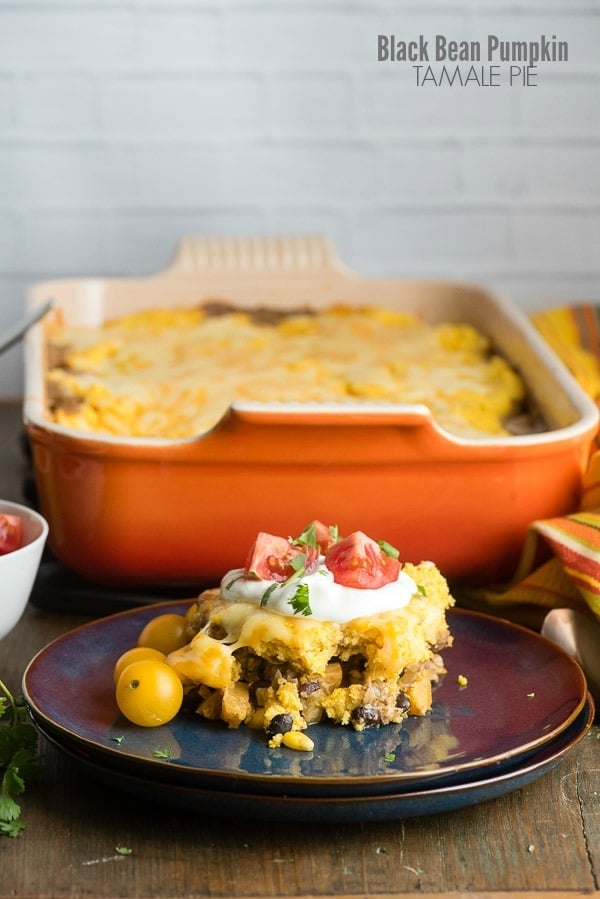 I am a pumpkin late bloomer. I did not like eating it until the last 5-10 years and I blame that on too many holiday meals where it was made into recipes that amplified its natural sweetness. I felt that way about all winter squash until I discovered the secret; compliment the sweetness with spiciness. Black Bean Pumpkin Tamale Pie is a perfect example of this fantastic combo. Hearty, seasonal, cool weather comfort food. And those who are saying ‘but I don’t like pumpkin’, hang in there because you’ll love this! 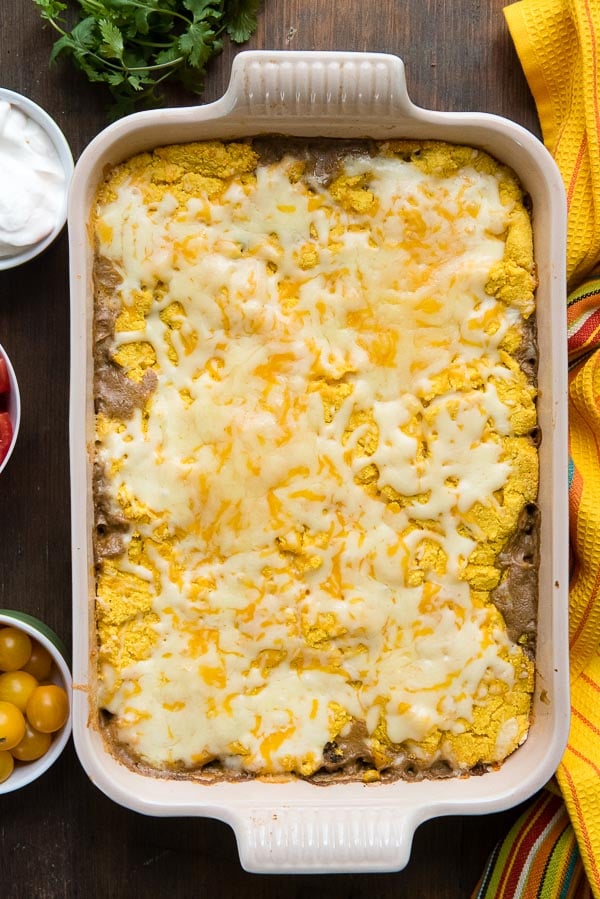 Black Bean Pumpkin Tamale Pie was inspired by a recipe I tore from a magazine several years ago. I loved the southwestern feel and after making it several times, playing with the seasonings, it has become something we look forward to each autumn. It is a one dish meal with a saucy meat portion of ground beef, onion, black beans, pumpkin, corn, green chilies and some earthy spices. It’s topped with cornbread mix and some cheese baking into a wonderful dish. Serve topped with salsa, sour cream, guacamole, chopped fresh tomatoes, chopped cilantro, and/or sliced green onions, it’s a filling meal and great for gatherings as well. 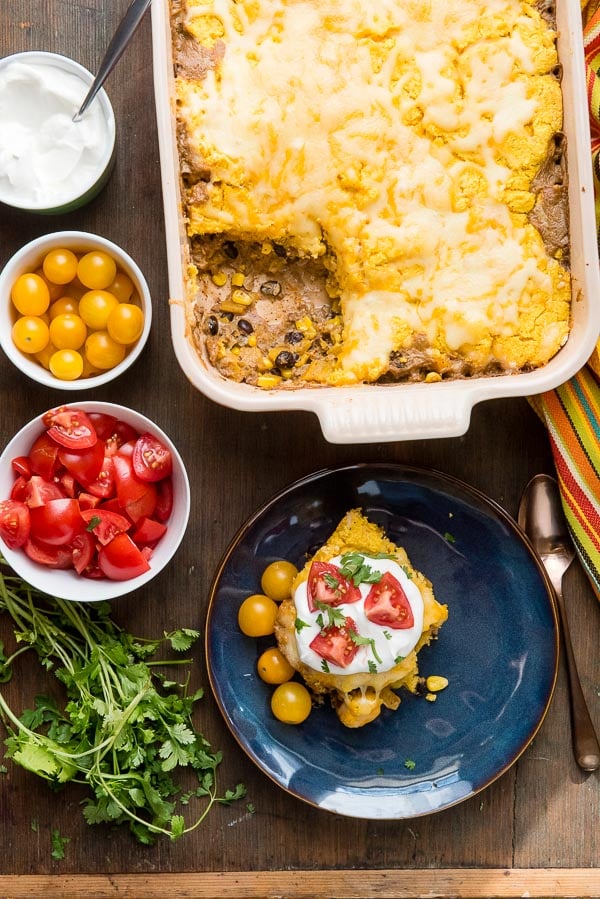 Slow Cooker Spicy Pumpkin Chicken Corn Chowder was probably the personal recipe that swung me around the corner to realize how fantastic pumpkin can be in savory recipe. Pumpkin has some great nutritional benefits but frankly unless you enjoy eating it, who cares. For those worried this Black Bean Pumpkin Tamale Pie may taste overly pumpkin-y, never fear. The recipe features small chopped pumpkin in the savory meat portion; they don’t taste like pumpkin and the texture reads like potatoes to your senses. 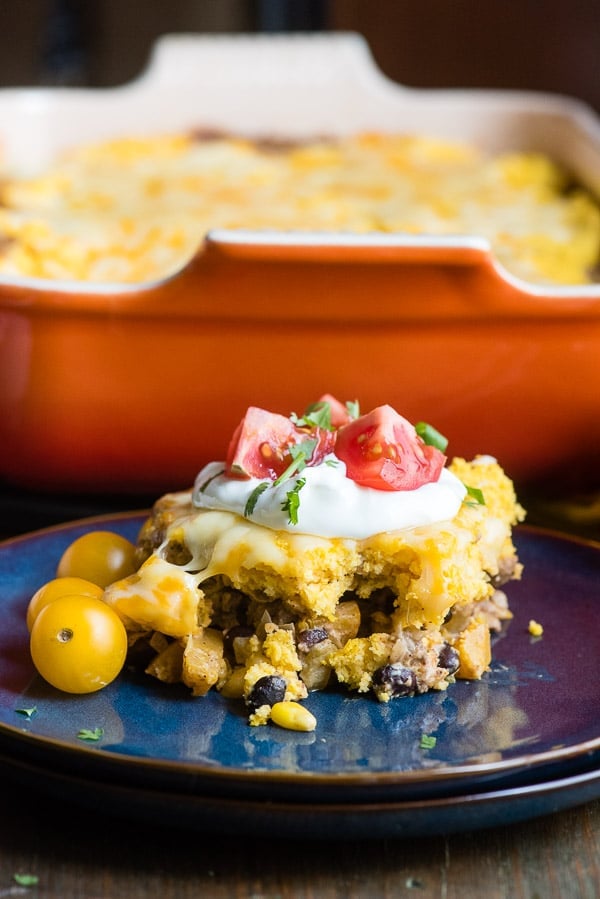 How to Prepare Fresh Pumpkin:

Prepping a pumpkin can take a bit of time. I prefer pie pumpkins which are smaller. Using a heavy large kitchen knife, cut the pumpkin in half and scrape out the inside fibers and seeds (be sure to save this to make the Roasted Pumpkin Seeds the best method ever; it has a trick that separates the goop from the seeds easily). Cut the pumpkin vertically into strips and remove the outer skin with a vegetable peeling. The soft meat of the pumpkin is easy to chop into small pieces.

How to Save Extra Pumpkin Puree:

I love making pumpkin puree from scratch but whether doing this or wondering how to use extra canned puree I have a trick I love. Spoon extra puree into the cavities of an empty ice tray and freeze. Cubes may be removed and stored in a freezer jar or freezer grade plastic bag for future use. 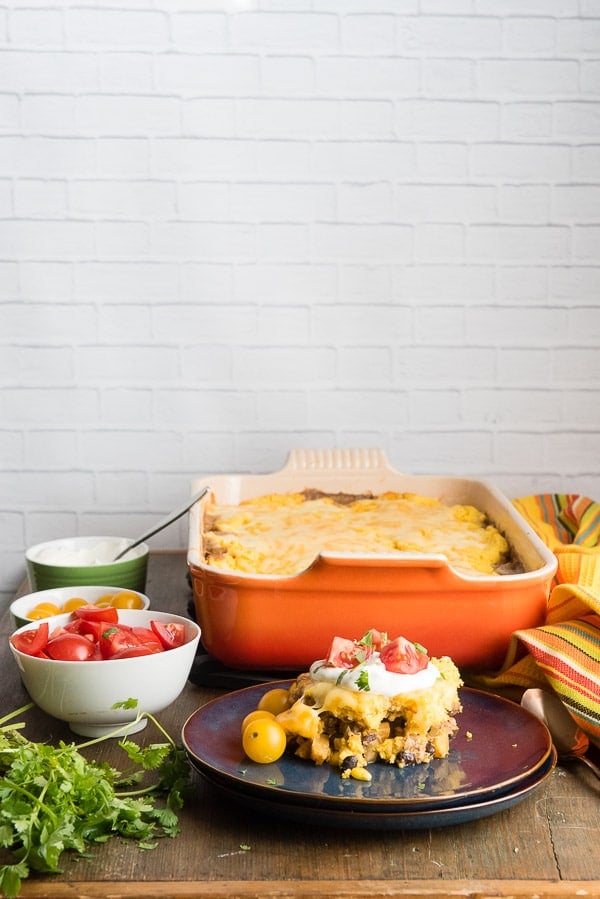 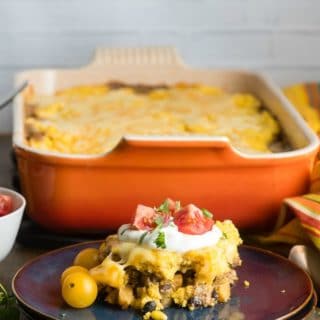 This delicious recipe was originally published in October 2011 and has been updated in 2017.