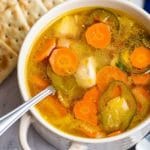 This family recipe for Homemade Chicken Soup is what I always make when someone has a cold. Wholesome, nutritious ingredients and a few ‘secrets’ make a homey, comforting soup that’s delicious anytime. 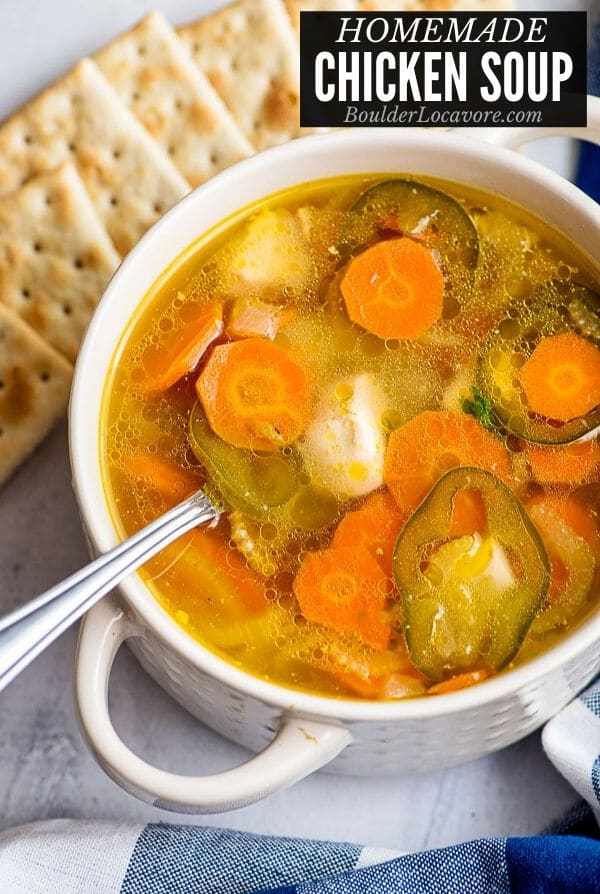 There is nothing more comforting than homemade chicken soup.

As easy is soup from a can is, making chicken soup from scratch is not difficult and the results are so much tastier!

The ingredients are simple, wholesome and easy to find.

Simmering together they create a delicious soup you’ll love anytime.

Chicken Soup for a Cold

I originally created this recipe a decade ago after having a long standing respiratory virus I couldn’t shake.

After my physician tried multiple medications to shake the illness from prescription to homeopathic remedies she announced clearly ‘and you need to have someone make you homemade chicken soup’.

To be candid I was so under the weather my memory of her lengthy description of its medicinal benefits came across like the voices of the parents in the Peanuts series (Wah-Wah-Wah Wah).

No recall of what she said.

Her direction however has stuck and it’s now my first instinct when I feel the creeping in of a cold.

My kids request it and I keep some in the freezer at all times. 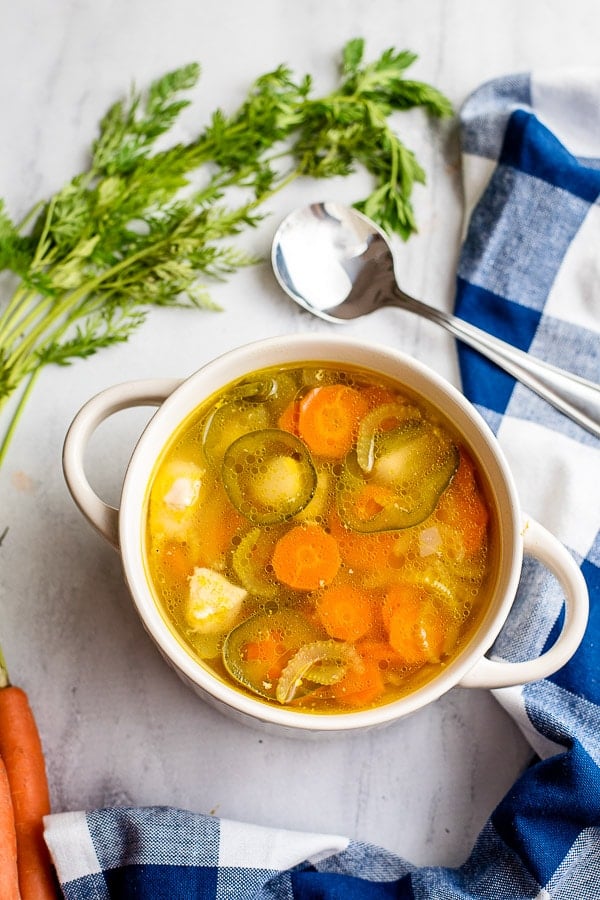 I found the following in an article about remedies that DO help colds on the Mayo Clinic website published October 28, 2010:

“Chicken Soup: Generations of parents have spooned chicken soup into their sick children. Now scientists have put chicken soup to the test, discovering this it does have effects that might help relieve cold and flu symptoms in two ways. First, it acts as an anti-inflammatory by inhibiting the movement of neutrphils – immune system cells that participate in the body’s inflammatory response. Second, it temporarily speeds up movement of mucus, possibly helping relieve congestion and limiting the amount of time viruses are in contact with the nose lining.”

I’m not a medical practitioner and cannot claim this soup helps with a cold.

I can say it’s soothing and easy to eat. At a minimum it helps keep liquids coming. 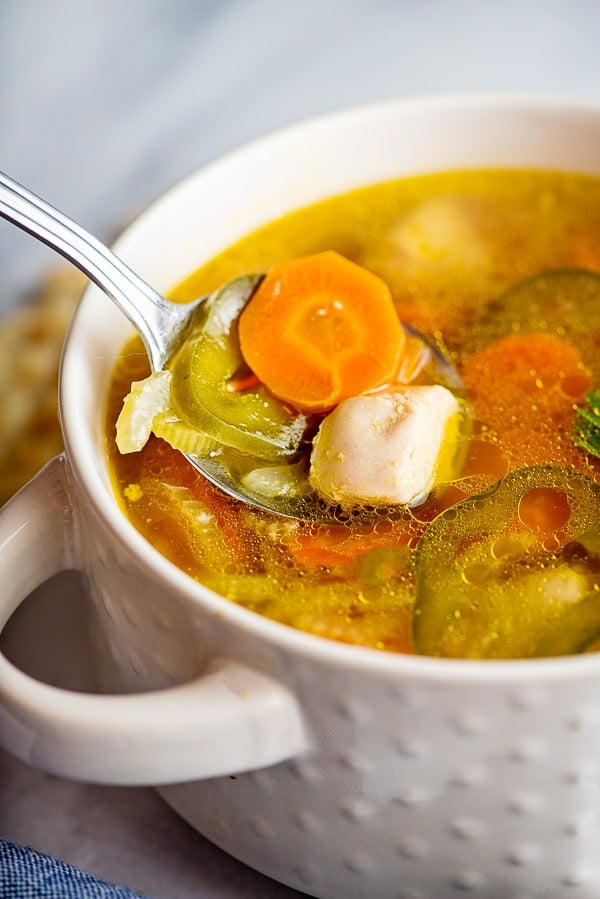 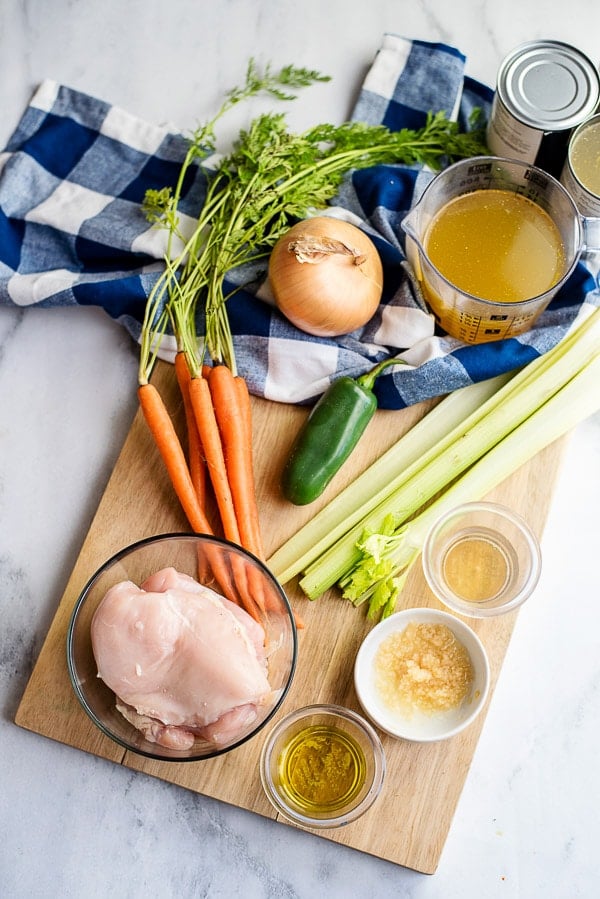 The most time consuming preparation of this recipe is the vegetables. Here are a couple of short cuts that speed things up and still create a delicious soup.

Jalapenos can vary greatly in their spiciness. When cutting them do not touch your eyes, nose or mouth before washing your hands first.

The seeds create most of the spiciness so removing those before adding the pepper into the soup is key.

What Type of Chicken to Use

Originally I would make this recipe with a small whole fryer chicken. It adds more flavor due to the skin and bones.

However it also takes three times longer to fully cook and requires straining out the bones and shredding the chicken.

If you have the time, it’s delicious.

I began making it with boneless skinless chicken breasts due to often making the soup with little notice and those being on hand.

The soup cooks faster and the chicken only needs to be cubed so it’s an easier method overall.

There is some information suggesting the salt in chicken soup is partially what makes people feel better.

I think the balance of the two types of stock taste good.

You can use EITHER regular or low sodium chicken stock.

A touch of apple cider vinegar brightens the flavor of the soup.

Some people believe it has home remedy properties for a cold but those claims have not been medically substantiated. 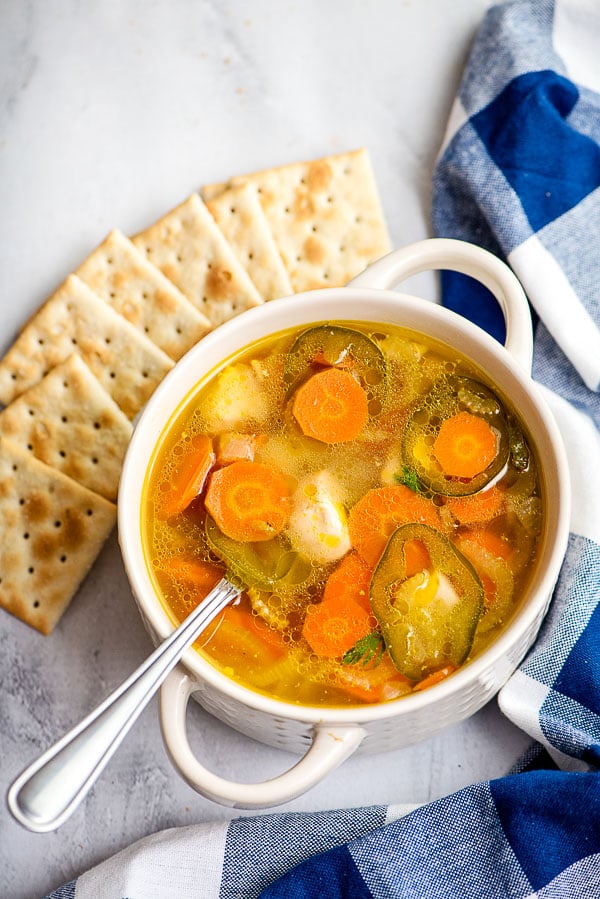 Simmering the Soup. If I have the time I let the soup simmer for a number of hours (or prepare it in my Instant Pot). It greatly reduces the broth to a rich taste.

Doing this causes some evaporation so I add 2 additional cups of water toward the end to dilute the broth a bit.

Chile peppers.  I think getting a good sweat on is great for moving a cold along (personal opinion only). I like the heat of the chile pepper in this soup for that very purpose.

Seasoning. The sauteed vegetables are all that is needed to flavor to the soup. I keep other seasoning to a minimum (salt and pepper only) for this soup. I find frankly when getting a cold I cannot taste much anyway. If you are making this homemade chicken soup under more normal circumstances, add whatever seasonings you like in soup (thyme, oregano, bay leaf would all be nice).

STEP 1: Prepare the vegetables by slicing and chopping (photos 1-3). TIME SAVING TIP: all of the vegetables can also be processed together in a food processor. 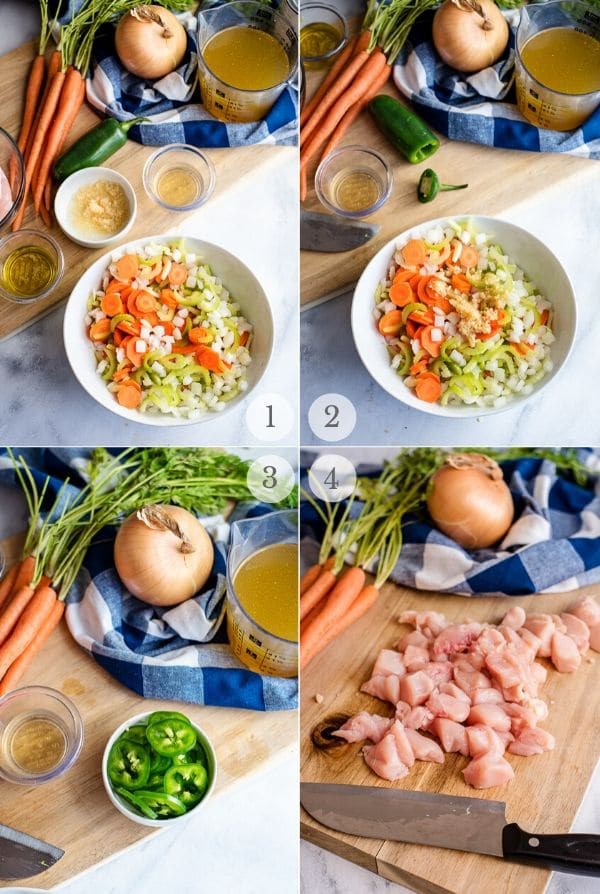 STEP 2: In a stock pot heat the olive oil over medium-high heat (photo 5). Add the vegetables (except the jalapenos) and saute until they begin to soften; 2-3 minutes (photo 6). 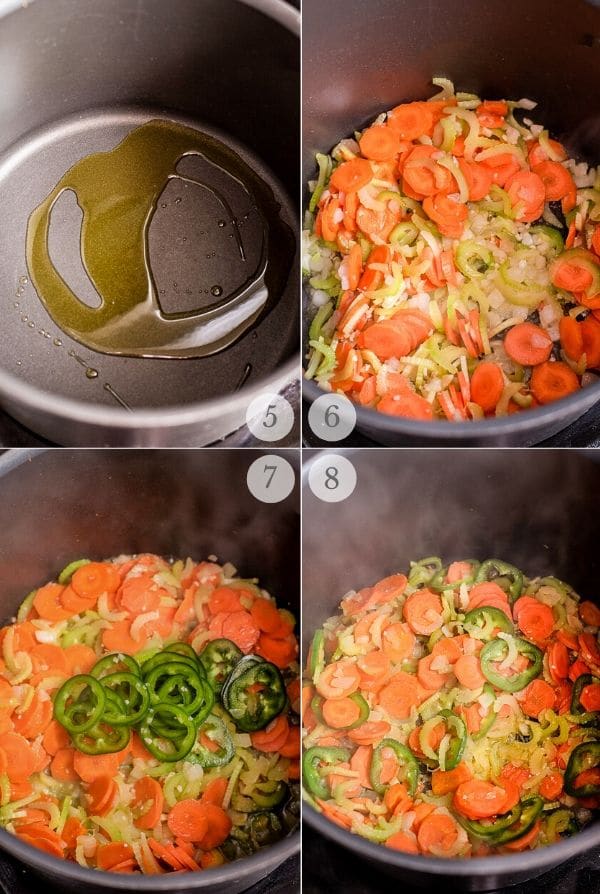 STEP 4: Add the chicken, chicken broth and water (photos 9-11). Bring to a boil then lower heat to simmer. Follow the cooking time in the recipe card below for the type of chicken you are using. 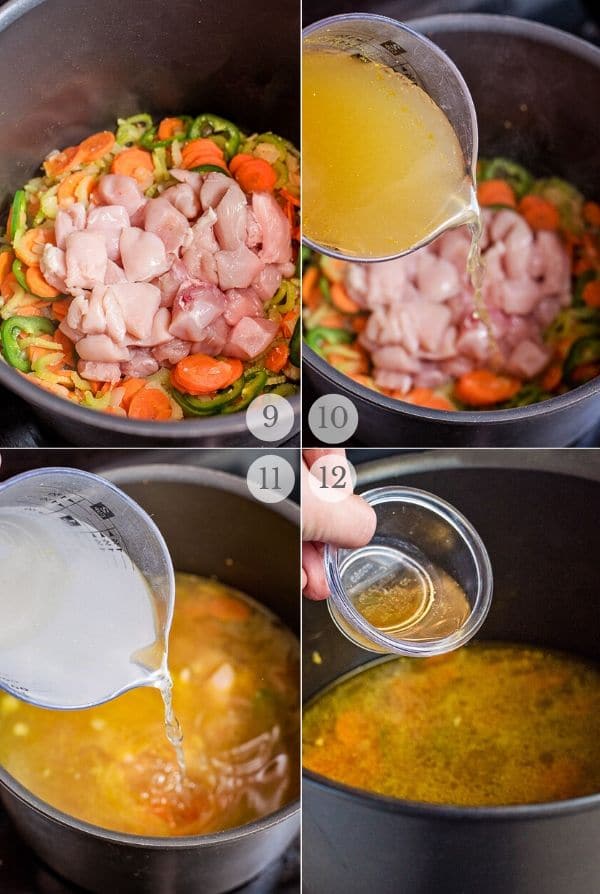 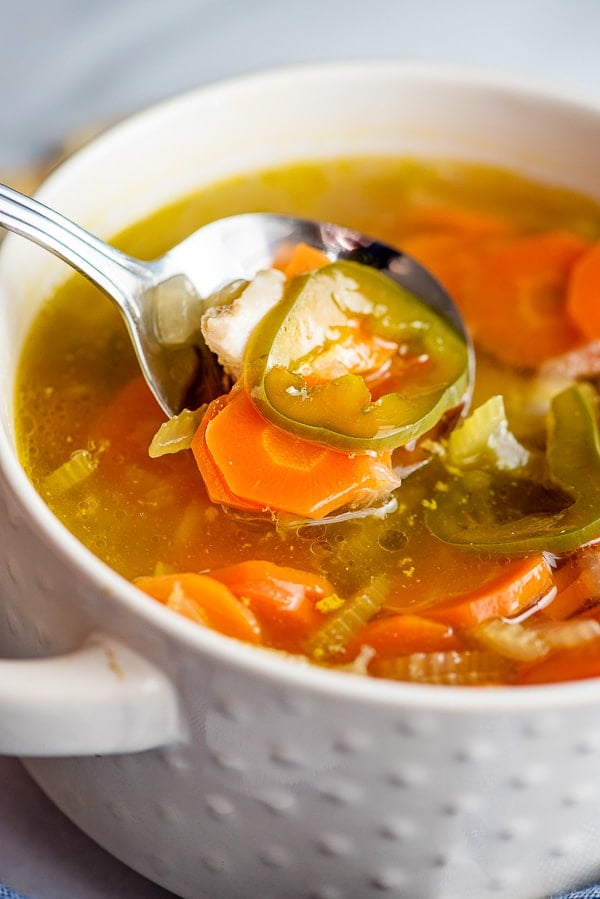 Store in a sealed container for up to 3-4 days.

This allows room for the expansion when freezing. 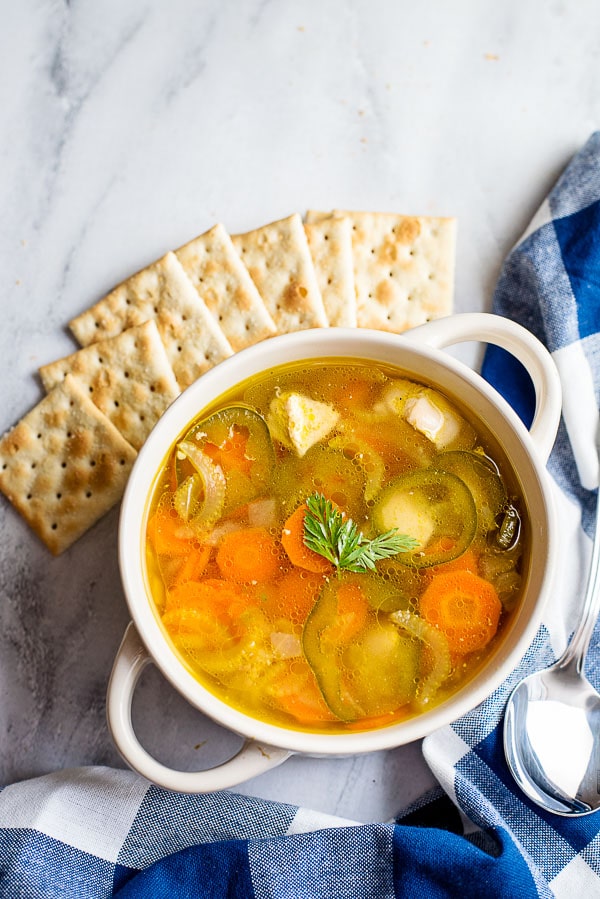 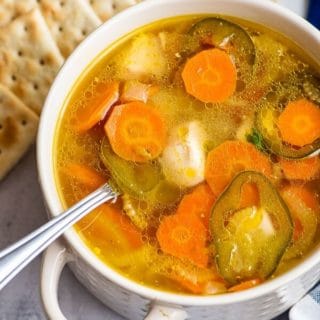 Ingredient Notes Whole Fryer Chicken: I use all natural, no antibiotic, no steroid, free range meat but any chicken will do. Boneless Skinless Chicken Breasts: using them simplifies the recipe with no need to remove the bones  and speed things up.

To deepen the flavor of the broth, the soup may be left to simmer on low temperature for a number of hours. If doing so check the liquid level and add more water as needed.

Store in a sealed container for up to 3-4 days.

Allow the soup to cool. Pour into a freezer-safe container leaving 1-inch between the top of the soup and the top of the container. This allows room for the expansion when freezing. Store for up to 4 to 6 months.