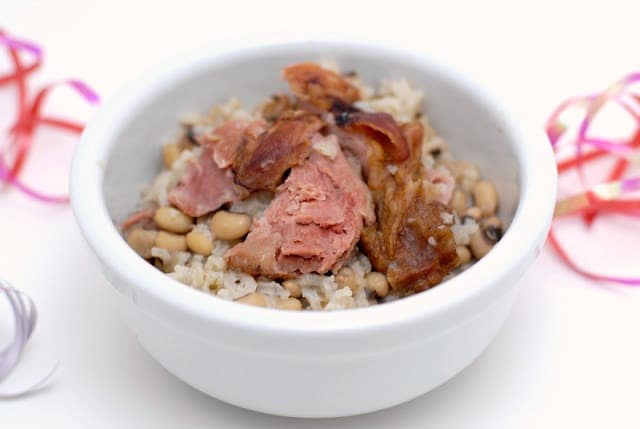 I’m not Southern, nor is Hoppin’ John a family tradition from my upbringing.   I am one however that will take good luck in almost any form it’s offered.
I don’t exactly remember where I learned about Hoppin’ John but once I did it became the first thing I eat on New Year’s Day; whether that is 1 minute after midnight on a well-caffeinated year or first thing when I wake New Year’s morning.  Personally I think eating a steamy, slightly spicy bowl of beans with pork is a very civilized breakfast anyway.

The roots of the dish are most likely from African slaves brought to the U.S. from rice plantations in the West Indies.  What is beautiful about this bean-and-rice dish is its uniform simplicity.  Variations consist literally of one herb difference or preparing it with pork or not!  It’s considered especially lucky to eat on New Year’s Day believing if you ‘Eat poor that day, you’ll eat rich the rest of the year’.  It should be the first thing to cross your lips by the way. I stand strictly behind that practice even if it is only a spoonful before coffee! 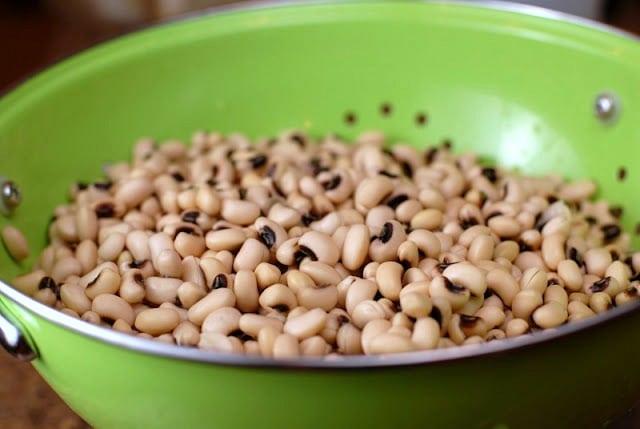 An aside: when I was chatting with my local butcher about the cut of pork to use for my recipe, he shared he always stocks a lot of ham hocks at this time of year due to this dish.  He also shared in the Japanese community it is customary to eat mochi, a pounded rice cake, first thing New Year’s Day for good luck! 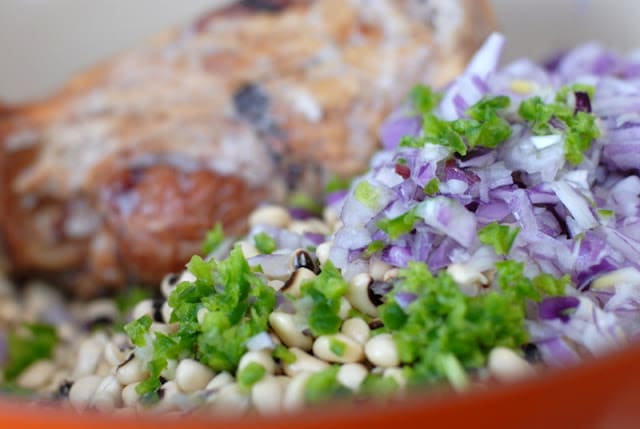 International Lucky Foods and Traditions to begin a New Year

I was intrigued about the international food customs to kick off the New Year and found some others I wanted to share with you. I’d love to hear of any food customs you practice to set your new year off with luck and promise!

Spain, Portugal and former Spanish colonies in South America:  12 grapes eaten at the stroke of midnight New Year’s eve; believing if a grape is sour, the month associated with that grape (e.g. if it is the third gape, the month of March) will be not so good.

Denmark:  The New Year’s menu includes boiled cod. The fish is believed lucky as their scales look like silver.

Holland:  Ollie Bollen, a doughnut-like fritter is believed to be good luck because it has a round shape like coins.

Italy:  Round foods (symbolizing coins or wealth) are also popular in Italy. Cotechino conlenticchie, or green lentils and sausage, is eaten after midnight for good luck.

Armenia:  A flat bread, Darin, with a coin often hidden inside is eaten. The recipient will be very lucky for the coming year!

Brazil:  First meal of the New Year is lentil soup (the roundness of the lentils mirroring the wealth of coins).

France:  Eat a stack of crepes for good luck and good health for the coming year.

Hungary, and the Netherlands:   Eat donuts, believing the round shape to represent a full circle or prosperity.

Japan:  Along with the mochi, soba noodles are served symbolizing long life.

Mexico:  They eat Rosca de Reyes, a ring-shaped cake decorated with candied fruit and baked with one or more surprises inside!

Sweden and Norway:   Hide a whole almond in rice pudding and whoever gets it will have good luck for the next year.

Greece:It is traditional to eat Vasilopita, a sponge cake, with a coin baked inside. The person to find the coin is sure to have a lucky year!

Seems as well that lobster (swims backwards) and chicken (scratches backwards) is to be avoided on New Year’s Day, believed this backward behavior leads to ‘set backs’! And New Year’s Day is not the best day to become a member of the ‘clean plate club’. Many cultures believe leaving some food on the plate signifies having full pantries for the upcoming year. 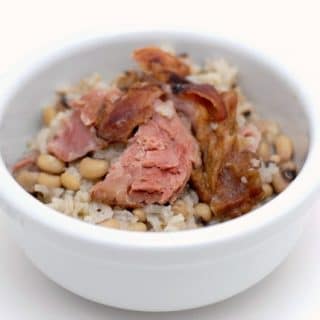 Hoppin' John is a rustic Southern dish of black eyed peas, seasonings and ham said to provide luck in a new year if it is the first food consumed! It's a simple, savory dish that reminds food doesn't have to be fancy to be soul-warmingly delicious. There are versions of Hoppin’ John that omit the pork. This is not an overly flavorful dish without the ham and I feel the pork is what really infuses the flavor.
5 from 1 vote
Print Save Recipe Recipe Saved! Pin Rate
Course: Main Course
Cuisine: American
Prep Time: 15 minutes
Cook Time: 2 hours
Total Time: 2 hours 15 minutes
Servings: 6 -8 servings
Calories: 463kcal
Author: Toni Dash
Prevent your screen from going dark