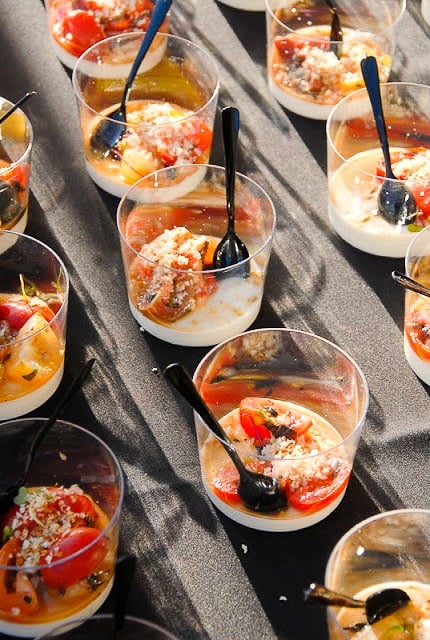 Picture this.  The perfect late heat of a sultry summer day circulated by playful trade winds.  A beautiful, happy group of party goers dressed festively to celebrate summer, carrying eye catching cocktails or small bites of precisely constructed food.  A verve in the air, an excitement for the evening and a sense that everyone belongs.  When glancing into the setting sun one might see the silhouette of a monkey traversing between trees or an elephant cooling itself with a dirt bath. 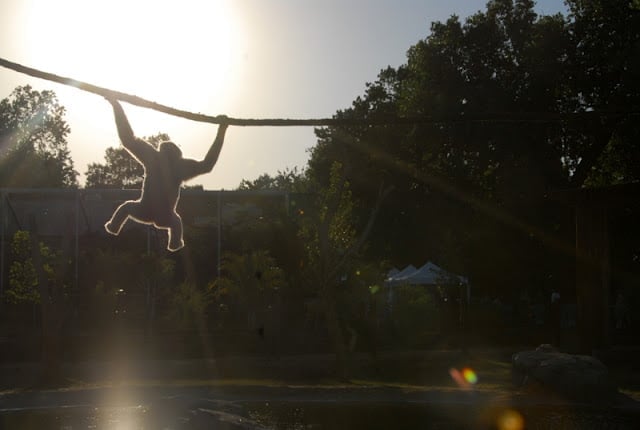 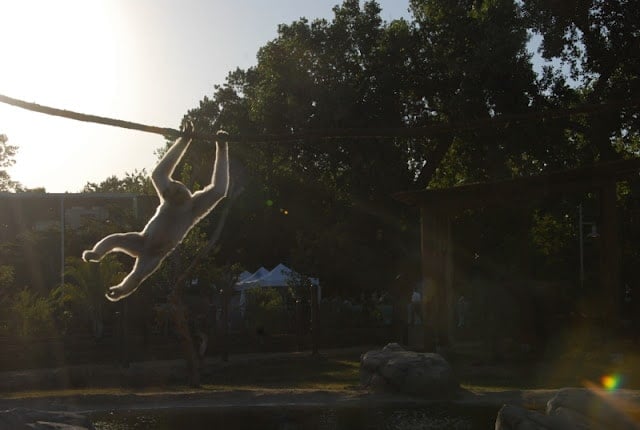 When I was on safari in Kenya and Tanzania I did enjoy similar vignettes but in this case one need travel no father then the Denver Zoo for the ‘Do at the Zoo’ event.  This year was my maiden voyage and almost instantaneously I questioned why on earth I had not attended before?  This event must be one of the most genius ideas I’ve heard.  The Zoo closes at noon the day of the event allowing the zoo staff and 63 of Denver’s best restaurants, artisan food purveyors and cocktail lounges to set up clean white canopies all around the zoo to receive the evening’s patrons.  Many of the ‘best of Denver dining’ list placers are here and I found it a perfect time to sample some of my personal long ‘must try’ list not yet visited as well as revel in well-loved familiar eateries.  The event runs for 3 ½ hours allowing plenty of time to nosh, imbibe, listen to bands and saunter the entire property. 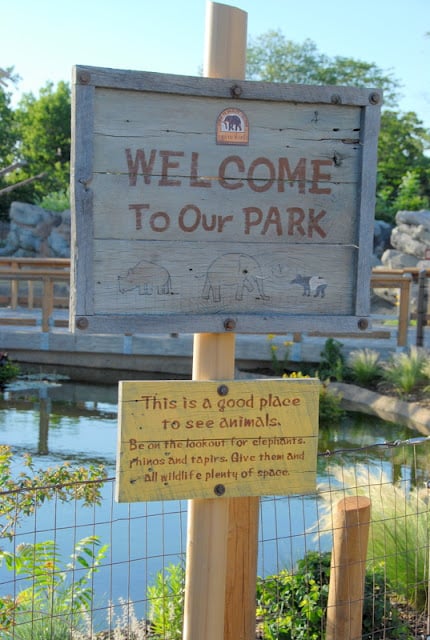 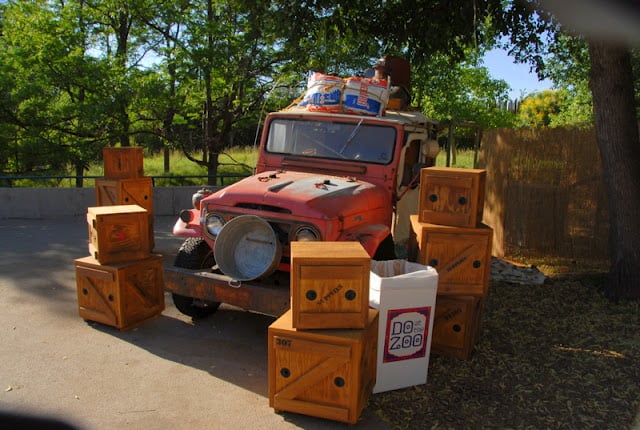 This year was extra special with the recent opening of the long awaited Toyota Elephant Passage exhibit.  With zoo membership at an historical high it was no surprise that the event sold out for the first time ever.  My evening began with a special VIP event hour prior to the overall event commencement.  We arrived to the zoo entrance having been completely transformed into an exotic departure.  Yards of billowy fabric enveloped the familiar entrance turnstiles; a band playing Asian instruments heightening one’s anticipation and signaled an evening of magical things. 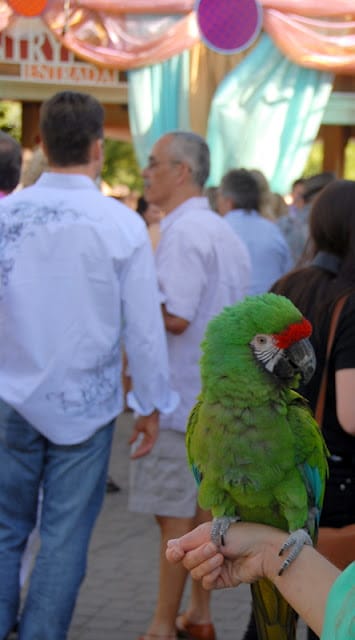 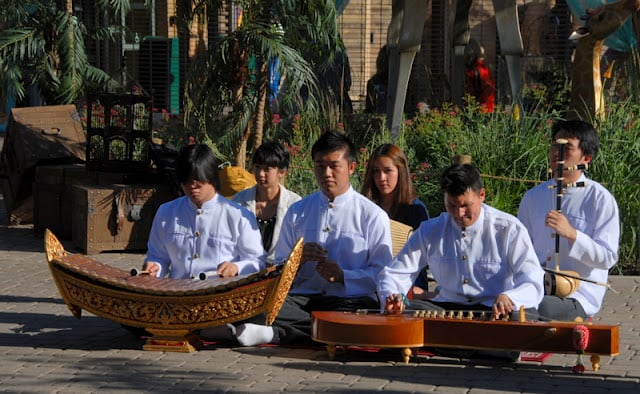 Guests were transported on extended mobile carts to the Toyota Elephant Passage to enjoy a welcome cocktail by Black Pearl (Pearl Plum Vodka with Cranberry and Pineapple juices).  Tall café tables dressed with brilliant colored fabric and contrasting ribbon dotted the landscape offering visual art and spots to perch.  The VIP hour was hosted completely within the new exhibit and offered three restaurants that were not participating in the rest of the ‘Do’: Fruition, ChoLon Modern Asian Bistro and twelverestaurant.  Regular readers will have seen my admiration for local Food and Wine Best New Chef (2010) Chef Alex Seidel of Fruition.  He’s a chef whose food commitment to ‘clean’, local, farm-to-table food (literally as he owns both a farm and a restaurant) mirrors my own as well as he’s a completely earnest guy.  I was thrilled to enjoy his Thai Style Octopus Ceviche (had thirds actually…..shhhh) as I am to share his recipe below for your next personal ‘do’. 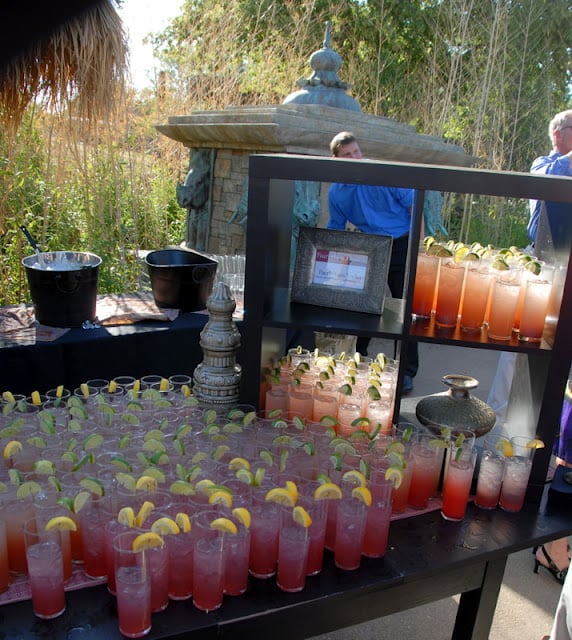 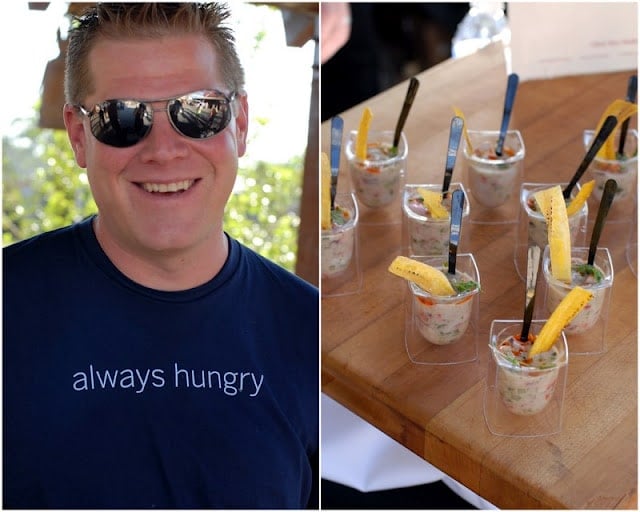 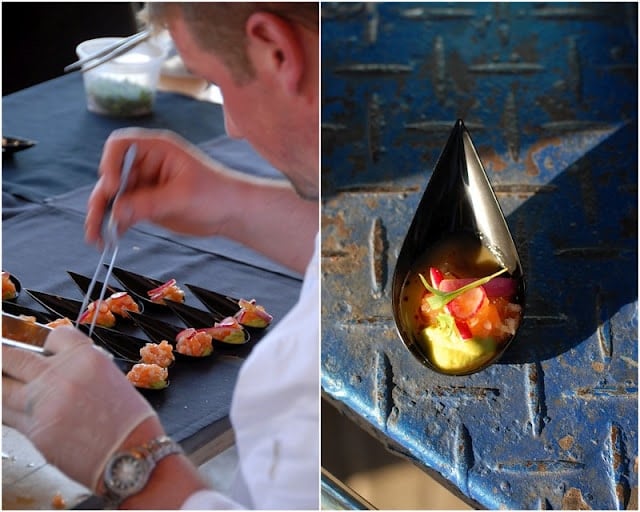 Before any dining began we were signaled that the heart of the Toyota Elephant Passage concept was about to be demonstrated.  The immersion-style exhibit is laced with areas where the elephants and rhinos pass to different areas an arm’s length away.  One of the most striking being the overhead bridge when entering the exhibit.  Bodhi, a new-to-the-zoo 8 year old ‘teenage’ bull elephant, christened the event by making an overhead pass en route to the watering hole area, elevating the buzz of the party-going crowd. 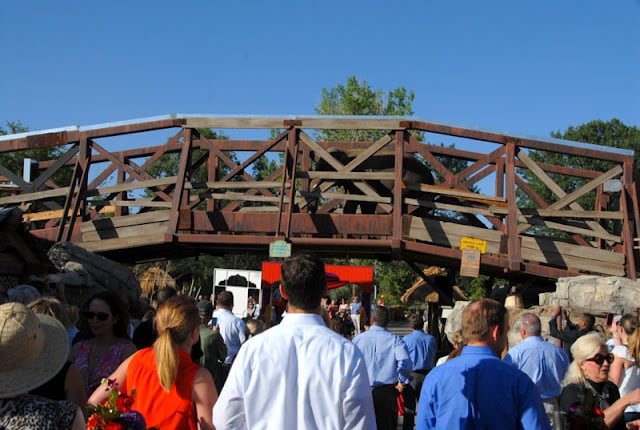 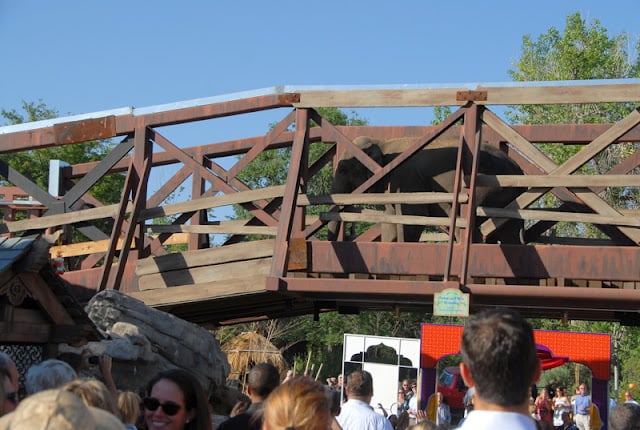 All of the elephants were outside leaving their indoor compound secured so we were able to ‘behind the scenes’ tour the facility.  ‘Impressive’ doesn’t begin to describe the soaring metal ‘barn’ capable of housing up to 8 bull elephants which is not typical of most zoos as males are more solitary and unpredictable when coming into their musk requiring more ample space.  One enters to a large central area visible to zoo goers.  The paddocks out of view are supersized, airy and well lit leaving me feeling if I were to come back as an elephant in a next life, I might want to check in here.  Two particularly interest-catching features were a large chamber allowing an elephant to enter and mechanically be rotated onto their side for examinations when needed as well as a wall panel in the main chamber that an elephant could depress with their trunk to engage a shower mechanism for a self-motivated spritz on a hot day. 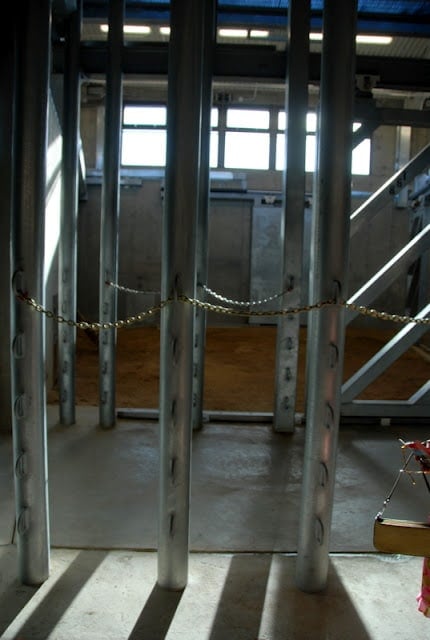 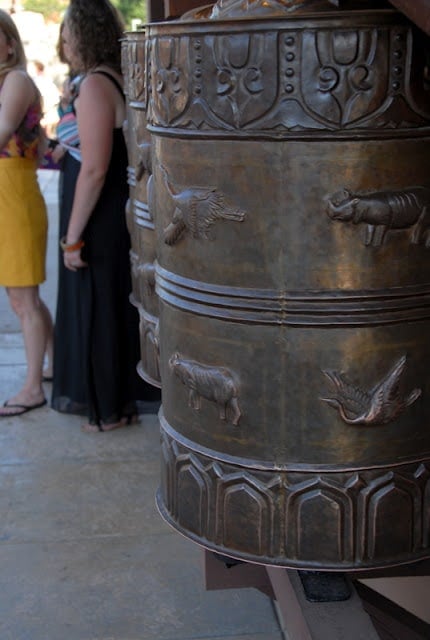 After enjoying the small bites from the special VIP restaurants, a champagne toast, watching Bohdi dirt bathe across the watering hole, strolling indoors to see the novel Fishing Cat and the Fruit Bats (who incidentally can have up to a 6 foot wingspan and are separated from viewers only through bamboo posts ever few feet with no glass) we headed out to explore the rest of the food and drink. 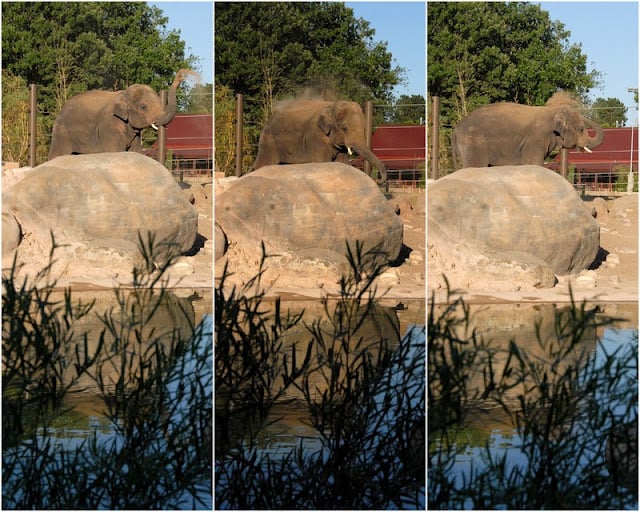 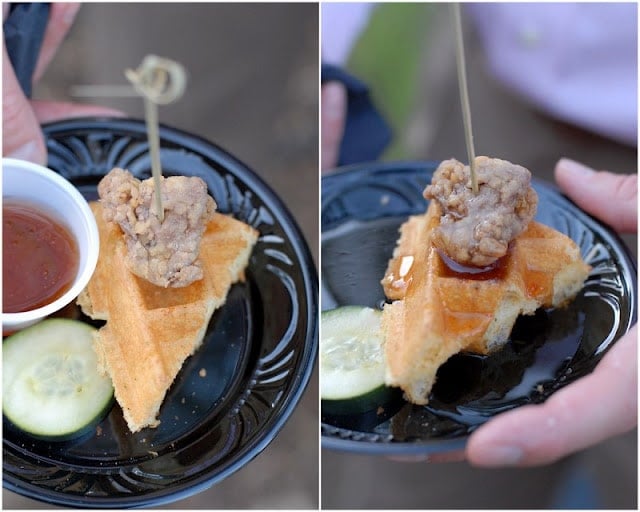 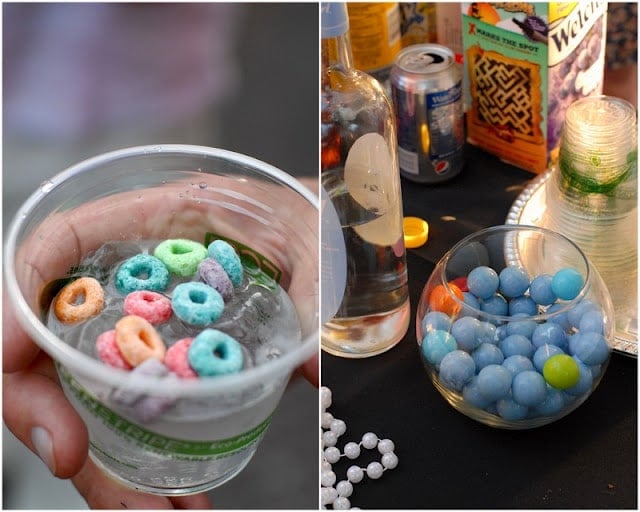 All participating restaurants donate their time and food, clearly bringing their A game and wild success to a most fabulous fundraising concept.   Not fully embracing the volume 63 booths offered we could not help taking seconds from a few of the first booths located in the Bird World area.  The dishes were all incredibly varied, all perfectly sized and suited for the warmer weather.  The restaurants ranged from familiar higher end chains (I define that by a restaurant with more than one of the same concept, like the Rio Grande, not nationwide typical chains) to the hip, chic venues foodies-in-the-know flock to.  The quality of the food was outstanding, the creativity on point.  Bands were positioned throughout the dining areas so at each main area there was musical accompaniment. 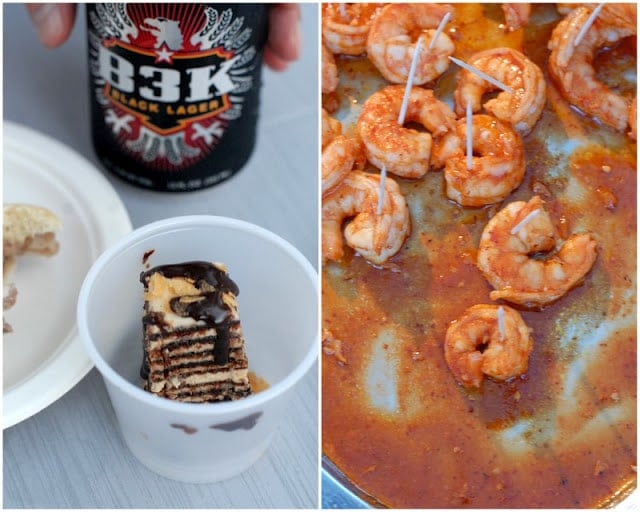 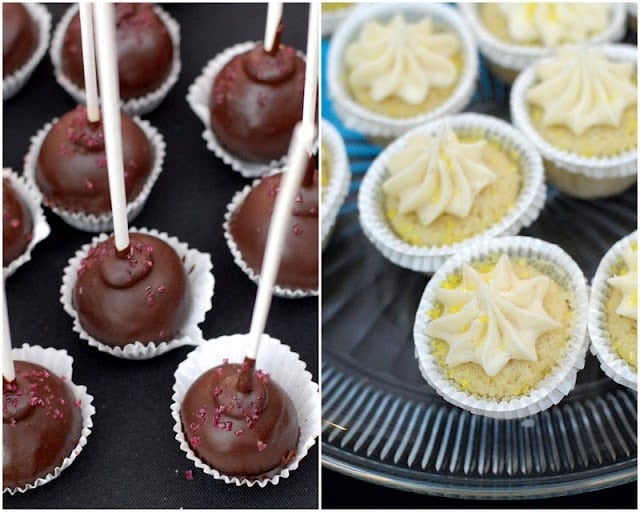 At several junctures I marveled at the evening’s perfection.  Enormous light globes were illuminated at dusk with strings of small white lights strewn throughout the trees.  Occasionally a male peacock would screech, flying into the trees above and the animals were out enjoying the cool of the day.  I found this event extraordinary.  Where else could one dine from so many restaurants at a time, drink the best of all brands featuring several local breweries and distillers in such a magical surrounding?  It’s no doubt that it’s the Zoo’s largest event and that it sold out.  Buy your tickets early next year.  It should not be missed. 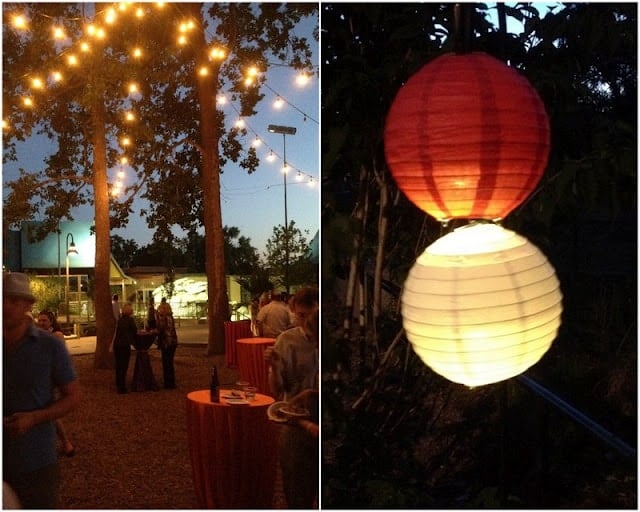 Do-At-The-Zoo Tips:
1.       Devise a ‘Food Map’.  When entering, the zoo patrons are giving a booklet detailing all the restaurants/bars, their location and offerings.  I found all booths educated on allergens making it an easy and safe dining experience for all needs.  When we were asked at the beginning if we had a plan it had been to taste a bit of everything.  It became quickly clear that unless we were to have a special stomach expanding technique that was not possible despite best intentions. Portions are small and cocktail size but one must pace themselves.   Some of my tasting was culled by my inability to eat gluten but it was still difficult to choose.  Really scope it out, pick your faves, take your time and enjoy.
2.      Wear comfortable shoes.  Cute shoes of course, but shoes you can walk in.  Everyone is dressed in cocktail attire but after two full zoo loops in my heels I questioned whether Converse sneakers would have really looked so bad with my sleek leopard print dress.
3.      Come ready to have fun.  We noted a very mixed crowd, all upbeat, fun, and dressed for the occasion, leaving it feeling a place for everyone and a fun place to interact with a wide group. 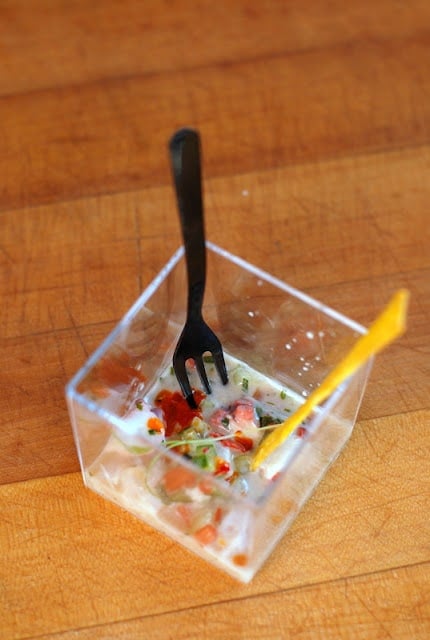 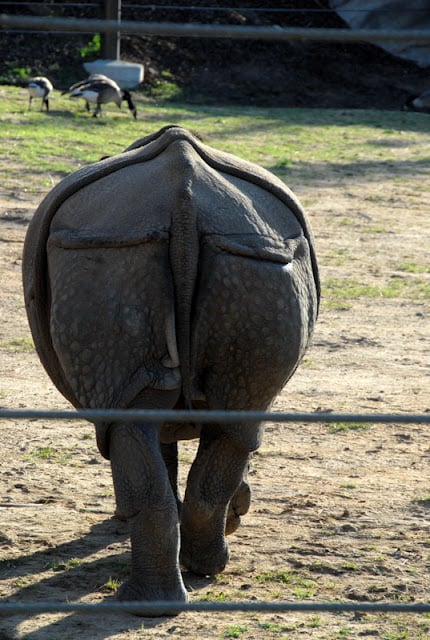