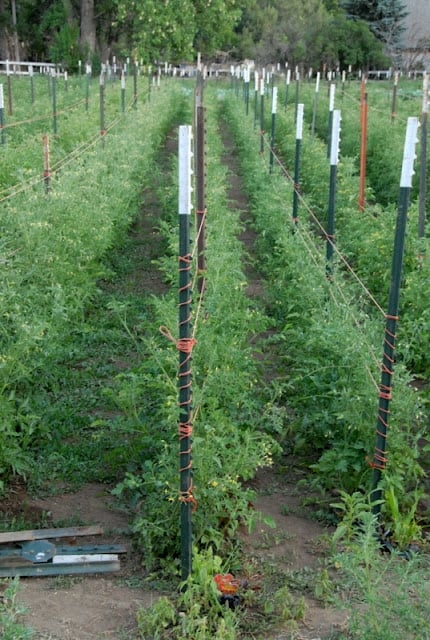 Despite my years of buying food from farms, having a CSA share and my adoration for the craft of small farming, I have never attended a Farm-to-Table dinner.  Until now.
I met Mark Guttridge of Ollin Farms in Longmont Colorado last fall when picking juniper berries at his farm with distiller friend Rob Masters of Rob’s Mountain Gin.  Mark struck me as a sweet, thoughtful person with an earnest devotion to the craft of farming.  Ollin Farms is not a huge farm by any means but they have a lot going on between offering a CSA in the summer, summer camps, selling bedding plants, running a Farm Stand, participating in the local Farmer’s Markets, conducting Farm dinners and maintaining significant community involvement including piloting the Boulder County Fruit Project and speaking publically about controversial issues such as GMO crops with a gentle manner attracting rapt attention.
For those unfamiliar with a Farm-to-Table dinner, it is exactly what it sounds to be; a multiple course dinner featuring the bounty from the hosting farm or other local sources.  The meals are conducted in a rural setting often in the farm fields themselves adding more ambiance to the exciting prospect of dining on the freshest food possible and supporting the local farm community. 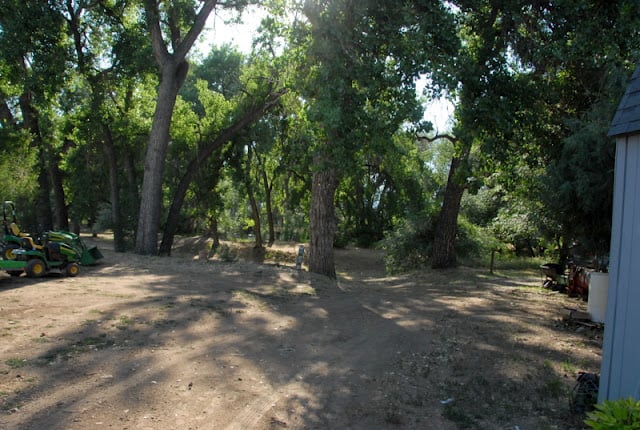 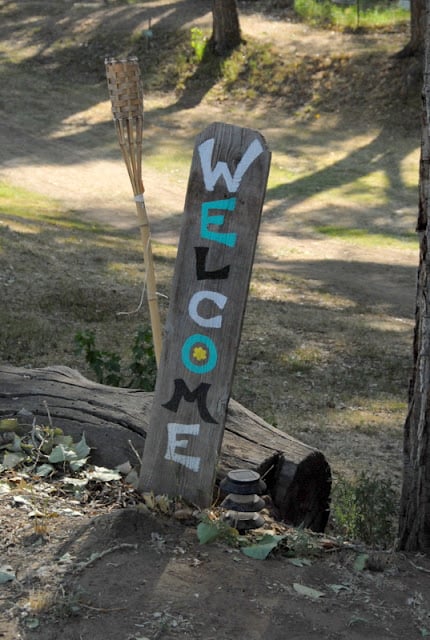 My car registered 102 degrees when I pulled into the Ollin Farms parking lot to partake in the Summer Solstice dinner, their first of the season.   I know the summer solstice is the longest day of the year but nowhere had I read it would also be the hottest thus far.  I scanned the landscape for a glimpse of heat salvation and was pointed toward a dirt road to stroll my way to the dinner.  I was quickly both relieved and enchanted to be shaded by towering trees overhead drastically affecting the temperatures in my favor.  The road lead us past a hand-crafted, ‘welcome’ sign, past several bee hives and into a shady glen where a roofed structure protected 4 tables each seating 18.  A songstress was already crooning inviting folk music and the charm of the evening had begun. 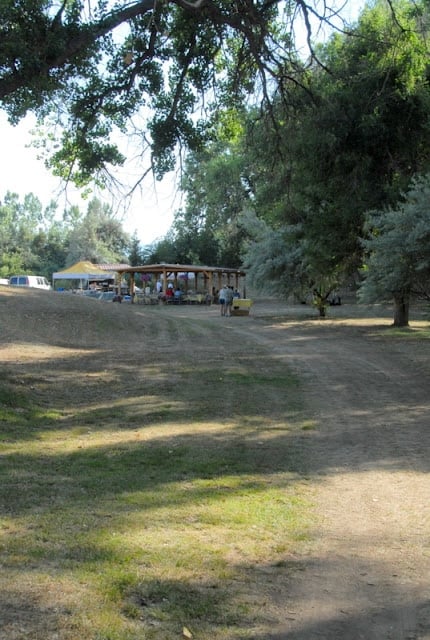 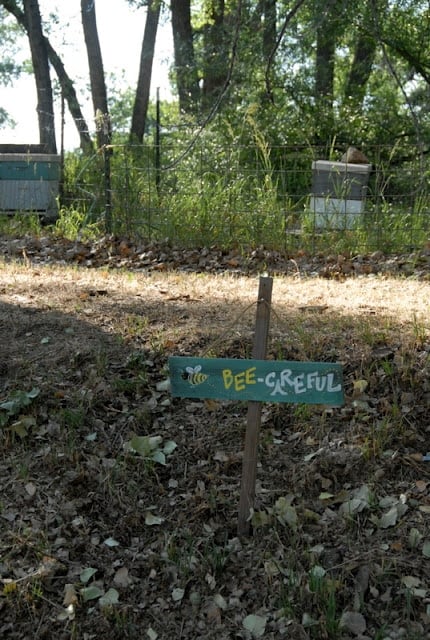 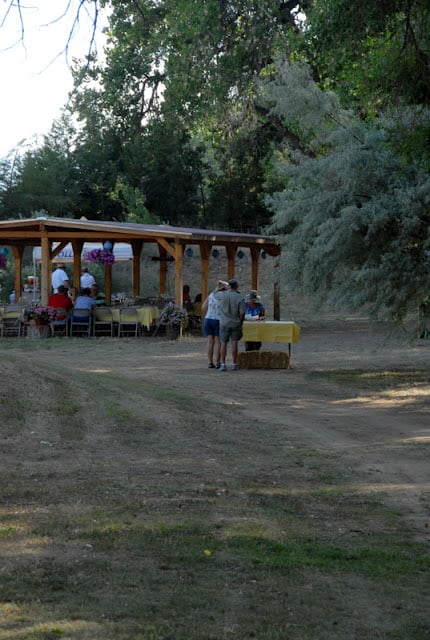 Mark’s wife, Kena, greeted us and directed us to our assigned table.  In our case, my husband and I were seated between two lovely groups of people.  All new to the farm dinner experience we waited with great anticipation for the evening to unfold.  Part of the goal of the dinners is to build a sense of community amongst the diners. Groups of diners would converse amongst themselves and interleave into each other’s dialogs making the social aspect of the meal inviting and warm.
The Guttridges have founded a partnership with local catering chef Dale Lamb.  They’ve worked with him for several seasons and feel they now share a mutual rhythm in the delivery of the experience.  Chef Lamb comes to the farm a few days prior to the dinner to craft a menu from what is available and ready for harvest. 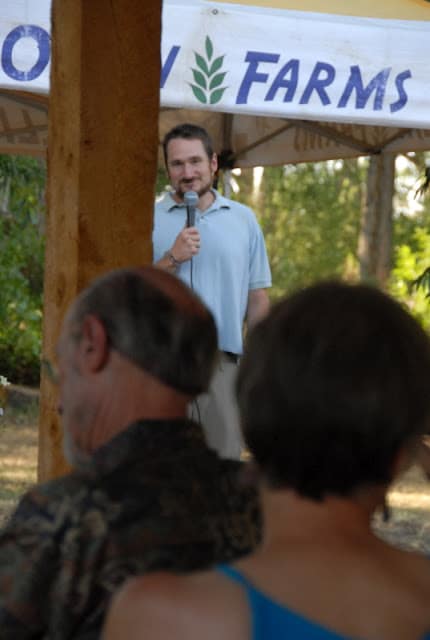 Before we began to dine Mark stood up to welcome everyone.  He bears an uncanny facial likeness to comedian Robin Williams, with an unceasing smile and genuine manner branding this evening as the authentic engagement most are seeking when coming to a farm for their food or for a meal.  He graciously thanked us, and humbly acknowledged some special family members and friends of the farm who were present.  Ollin Farms is a family run farm utilizing Mark’s father’s skills in many areas as well as his wife’s and four daughters.  The warmth he exudes is instantly welcoming and clearly conveys his deep appreciation for our part in supporting the system of small agriculture.
Mark went on to validate what several farmers have told me this year; we are having a drought and a scary one.  Perhaps in other regions temperatures of the intensity we have been experiencing are normal but not here.  Reaching 100 in June is almost unheard of and signals a rough road for crops and their farmers this year.  Along with his heart-felt thanks for participating in the dinner, Mark encouraged us to continue to support local agriculture as it is our consumer dollar that will help them through this. 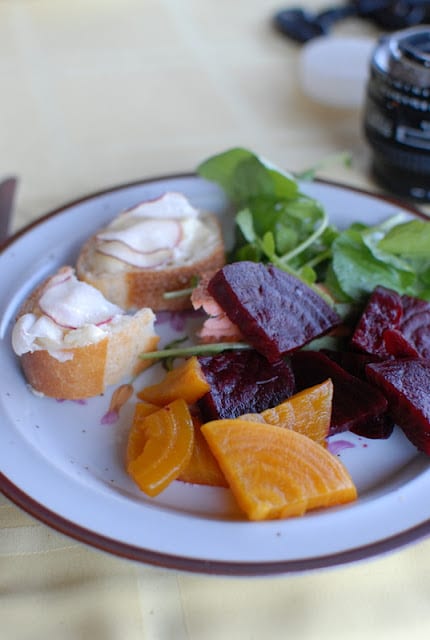 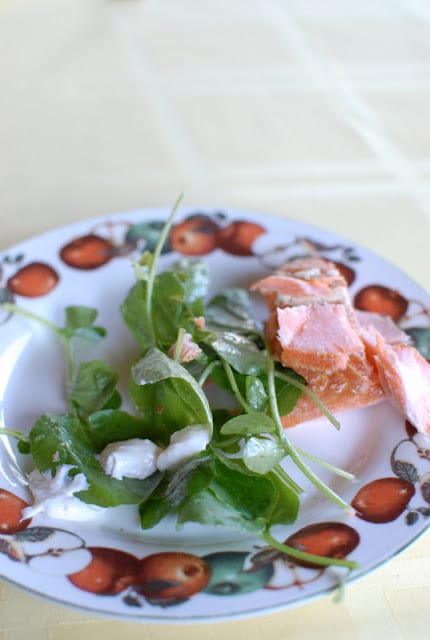 Our meal started off with self serve appetizers of freshly baked Baguette with French Butter, Guerande Sea Salt, Shaved Radishes and Sunflower Sprouts as well as Pickled Red and Golden Beets, Smoked Steelhead Trout and Horseradish Sauce.  It was a beautiful beginning between the colors and textures made all the more beguiling on mismatched vintage plates.  Each table was then served very large bowls of two salads to pass and share.  The artistry of handling the bowl lent itself to more meet-your-neighbor chat as it worked much better to help each other out in serving. 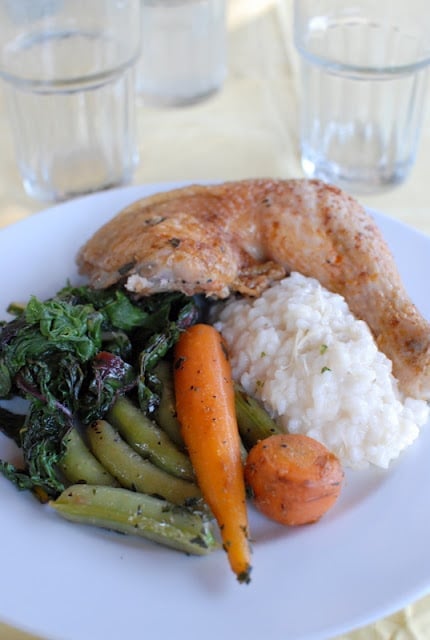 The main course was served buffet style.  All Natural Roasted Chicken from local Jodar Farms. Fresh Roasted Garlic Risotto.  Sauteed Sugar Snap Peas, Paris Market and Mokum Carrots with Tarragon.  Braised Baby Rainbow Chard.  The plate as served was nothing less than picturesque, with an alluring rustic authenticity.  One of my seat mates and I concurred about the freshness of the greens and how they truly do not compare to those sitting in stores after long routes of transport from far away states.  By this time the sun was beginning a slow descent, illuminating gigantic cottonwood trees swaying gently.   A balmy, heavenly breeze danced around the diners carrying the laughter and levity of the meal. 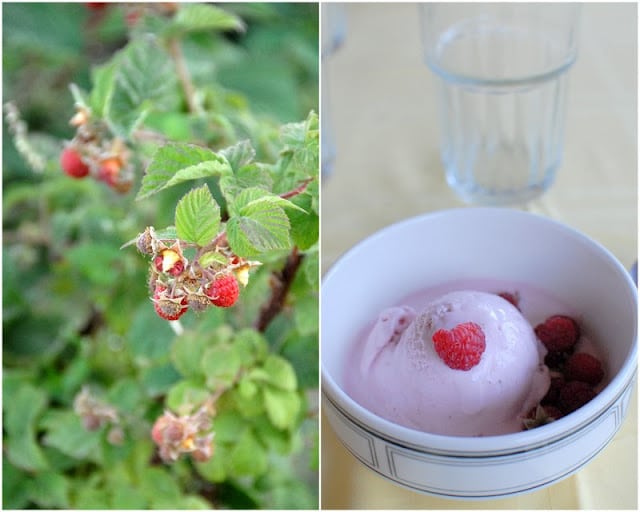 Our meal ended with a Shiraz Ice Cream topped with freshly picked Ollin Farms Raspberries.  Admirably the ice cream held up to quick scooping in the excessive heat and arrived in tact and soft in a way only homemade ice cream will present itself.
During the evening I had a few minutes to chat with Mark.  I recently learned he is an Environmental Engineer appreciating the steady pay check while pursuing his love of farming.  He gets going around 4 a.m. daily with the convenience of telecommuting from home.  Regardless of the farm’s size, there is a lot to be done especially with the strain of the heat.  Mark spoke of something I’ve heard in Michael Pollan and Joel Salatin’s work; tending to the strain of the soil.  When it comes right down to it, for any of this to work, the soil has to be a healthy living organism.  It requires nurturing as most people think of plants requiring.  Without that farms truly will not thrive.  Through our conversation I was struck with how farming really not only takes technical know-how but it takes a lot of courage.  It’s turned the corner to be square in the eye of foodies and the health-conscious alike however as a vocation it is certainly not for the faint of heart. 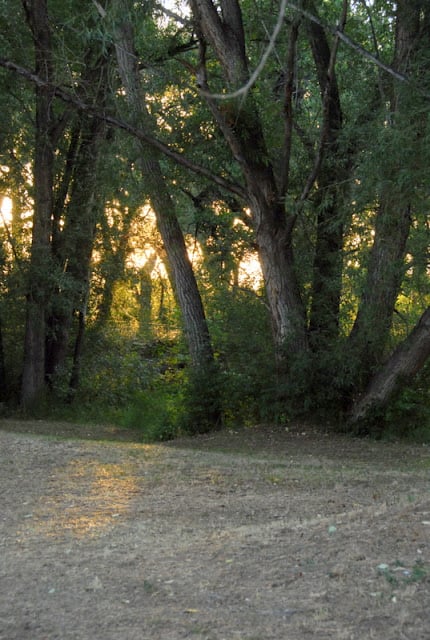 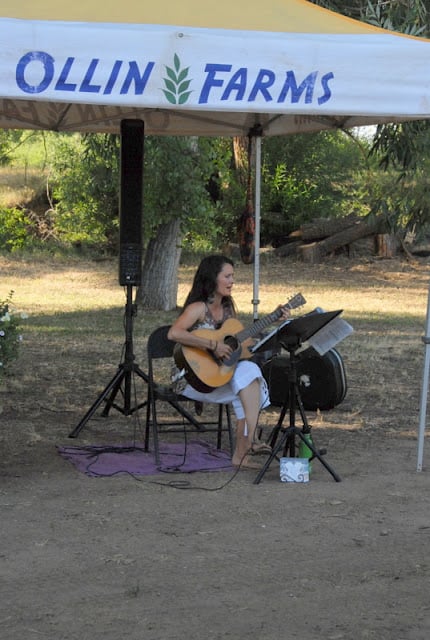 The evening began to draw to a close with sated and joyful diners enjoying each other’s company over wine and conversation set to dulcet tones of the singer who’d shared our evening into the waning golden light.  To echo Mark’s sentiments, it really takes all of us to support the local agriculture community of which we’ve grown so fond especially in the last years of ‘eating local’ and seeking the closest connection with our food producers.  Enjoying a Farm Dinner truly is the quintessential essence of that engagement and should not be missed! 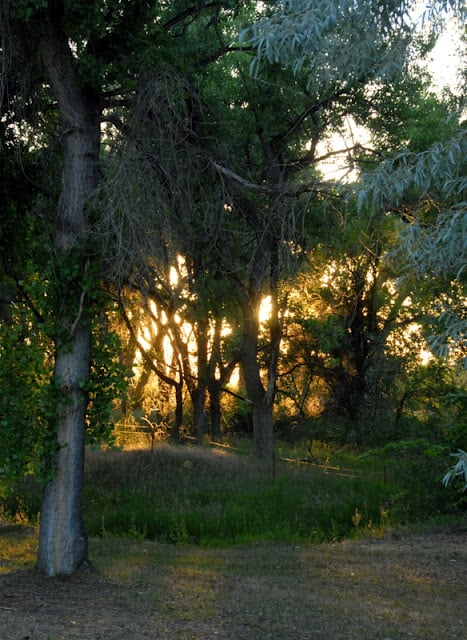 Ollin Farms offers several reasonably priced Farm Dinner during the summer.  Consider attending an upcoming dinner yourself.  For those out of the area, farm dinners have become a popular seasonal dining trend.  Check in your area or through your local Farmer’s Market to find farms holding them near you.
Post Script on Chef Dale Lamb.  The evening following the Ollin Farms dinner I attended a Summer Solstice Bacchanal Party at the home of some local friends.  Imagine my surprise when walking into their backyard to find the ‘Grill Guy’ they’d hired for the evening was Chef Lamb!  He prepared a grill feast of varied meats, corn, local vegetables (including those perfect, round Paris Market carrots again) leaving guests snapping up his card left and right for their next party.  The guy makes good food.
When the salads were served at the Farm Dinner, I asked my neighbor when the last time was she’d thought of Green Goddess dressing which was served on the fresh greens.  We both flashed back on 7 Seas dressings offering an array of exotic dressings of the time, Green Goddess being one of them.  When I returned home I knew I’d seen a recipe for it in a family recipe box.  With a bit of digging I indeed found a recipe card in my Great Grandmother’s hand.  I found the dressing so light and different as a compliment to the freshly picked greens I wanted to share it with you here.  When speaking with Chef Lamb he commenting it is a dressing that is becoming very popular again.
After noting Mark’s humble thanks to his extended family all of whom are involved to make the farm work I felt sharing something from my extended family would be a fitting way to close this post.
My great grandmother’s Green Goddess Dressing is a way we’ll remember this lovely evening.
« Chilled Strawberry Mousse and a Strawberry Spritzer
The Do at the (Denver) Zoo & Thai-style Octupus Ceviche recipe »