Look no further for a soul-warming soup recipe to take the edge of breezy fall days and snowy winter nights. Slow Cooker Chorizo Kale Soup is naturally spicy and chock full of great flavors. Fix it and forget it; the slow cooker has your back on the cooking front! 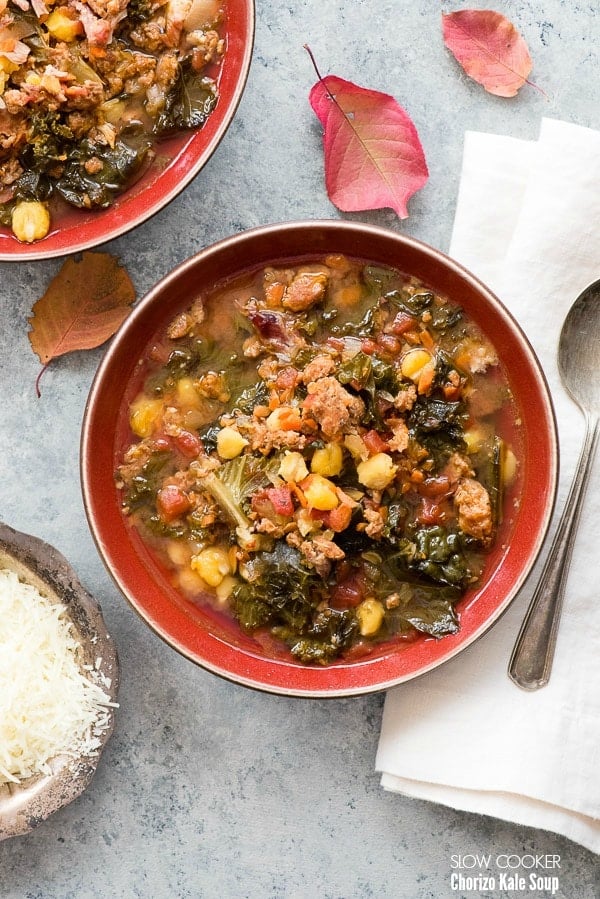 I’m just back from a food blogger conference in Austin Texas. The day I left last week it was pouring and threatening to bring the first freeze of the year. I loaded on the plane in jeans, a long sleeve shirt, bulky sweater, boots and a scarf. I emerged into 90 degree humid temps making me feel I was headed for vacation, not a few days of work!

When I returned, as if on cue, the weather in Boulder had become cool, windy and very fall-like. Our maple tree was boasting bright red leaves and my craving for soup ignited with a passion. Soup is one of those foods once summer passes that I would happily eat daily and for any meal of the day. I love everything about it. Flavor-packed broth, chunky seasonal ingredients and the soul-warming quality of of sipping a cup of it. 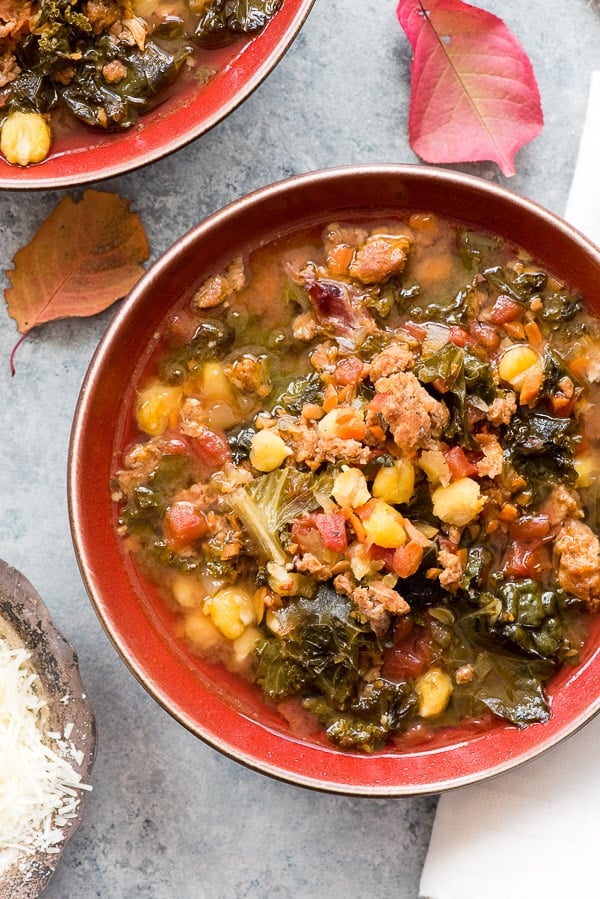 I tend to veer toward spicy soups when I make them and this Slow Cooker Chorizo Kale Soup is no exception. It’s a simple recipe really, though does require pre-cooking the ground chorizo to break it into small pieces and to render the fat before adding it to the slow cooker.

One thing I love about using ground chorizo in soups is that it delivers such concentrated spicy flavor it’s not necessary to really add other seasonings. I prefer to let the signature flavors of the other soup ingredients interplay to create a wholesome tasting soup. Using the holy stock trinity of carrots, celery and onion (shallots in this case) are a sure win to build a great tasting stock. 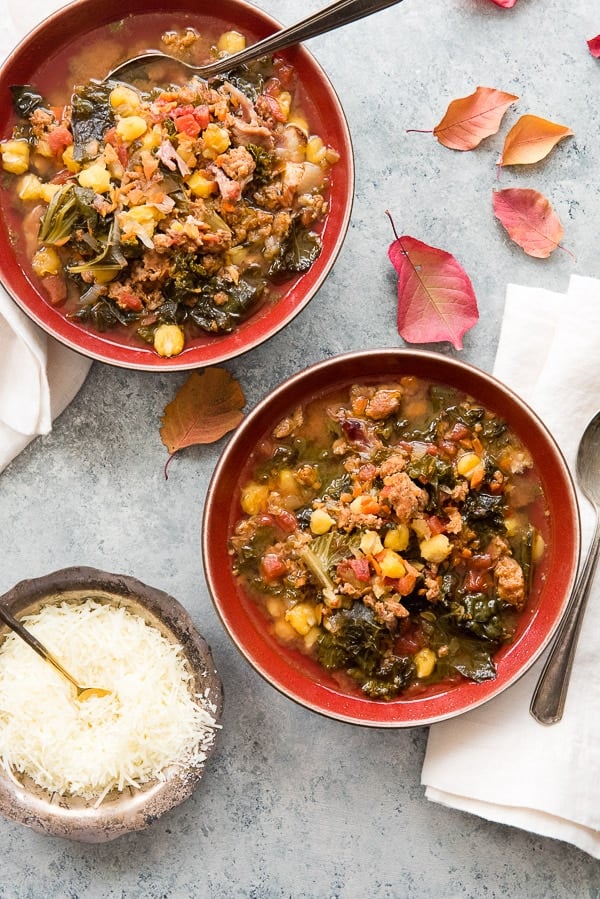 For those who aren’t big on greens, I’ll share a secret. I love kale because it does not have a particularly strong or pronounced flavor. It packs a nutritional punch that can’t be beat but it won’t over take your soup (or for me, smoothies) with a distinct flavor you might not love as other super greens do. 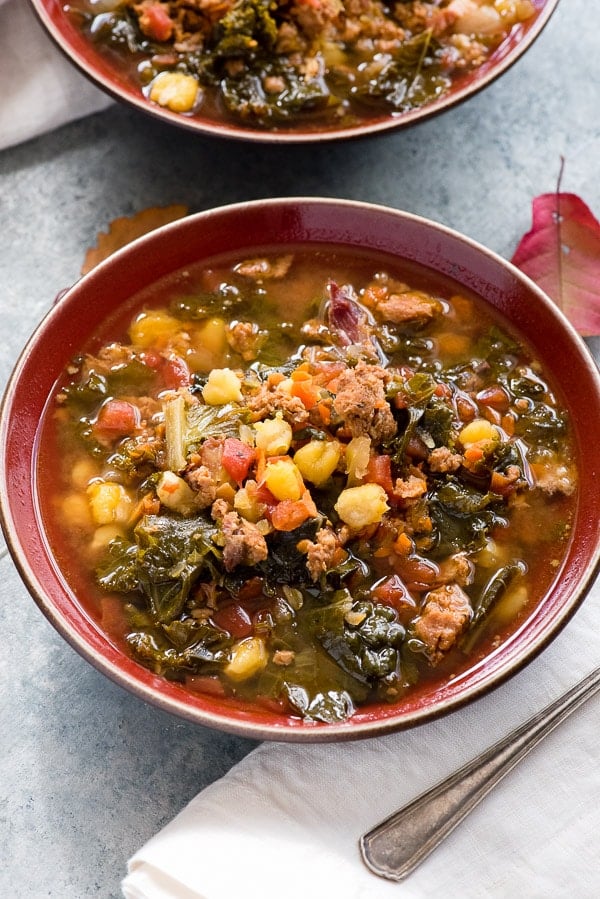 In the context of the soup the kale softens but still holds an appealing texture. It works wonderfully with the petite diced tomatoes, hominy (or corn), carrots, celery, and shallots. Adding ham bones or ham hocks (available from most butchers or HoneyBaked Ham stores year round) gives a buttery flavor to the broth too! 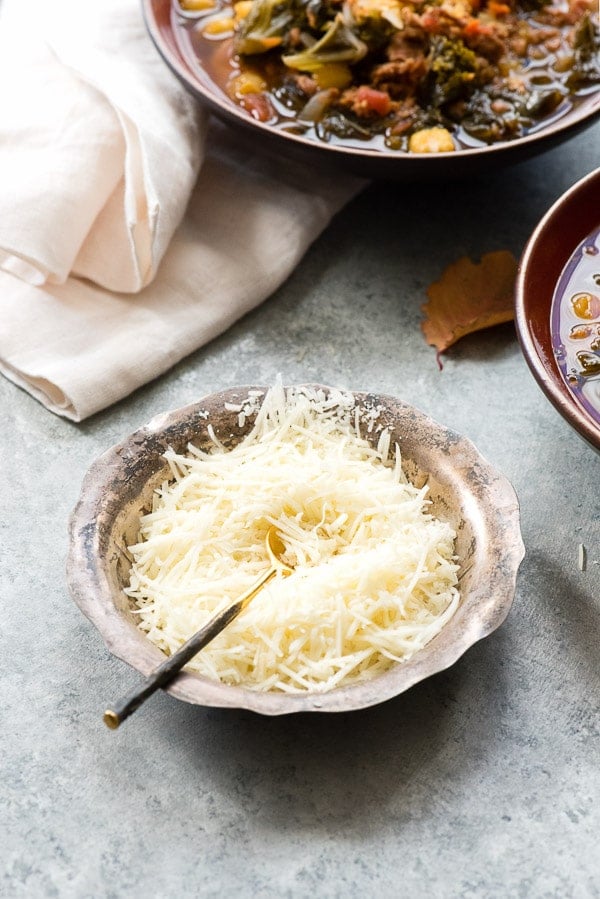 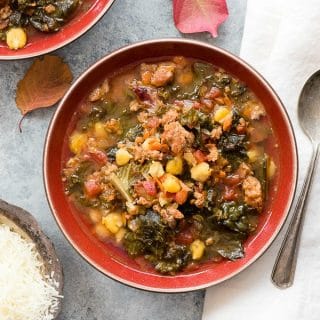