While on my recent excursion to Hygiene Colorado I had fully imagined dining at the Crane Hollow Café, whisking through the art gallery next door (which incidentally features many good local artists and jewelers) and popping briskly into Mary’s Market & Deli, the other main business for pedestrians in town. I expected Mary’s would be a quick look around, warranting a brief mention at the bottom of my Crane Hollow Café post and that would be it. I suppose the prompting by two friends (one whom I have not seen or spoken to for probably 5 years who went out of her way to tell a mutual friend I’d love Mary’s) should have been a clue.

When starting toward the door of Mary’s, my companion pointed at a small sign ‘All Gluten Free Bakery’, and winked. That’s great, I thought, feeling anyone can bake a few batches of cookies or a muffin and call themselves a gluten free bakery. When I swung the door open I do believe I inadvertently gasped and heard myself saying ‘This is SO unexpected!’ We were met by part old time General Store, part Flea Market/Antique Store, part Gourmet Market and full service Grocery. This place has the vibe I crave; authentic, lived in, hip, shabby chic and down to earth. I was ready to move in.

As I was taking a slow-mo 360 degree look I caught sight of a beautiful, vibrant woman with shoulder length brown hair, dancing green eyes and a fetching purple beret. She exuded warmth and the feeling we’d known each other forever. My friend re-introduced herself having stumbled into the store for eggs after a local hike during Christmas prior, to find a store full of carolers and happy holiday goers. Thinking it must have been a private party she stopped directly inside to be met by none other than Mary Magdalena (yes her real name), the store owner, who folded her into the mix of what was simply a happy holiday afternoon at Mary’s, not a party.

Mary is simply magical. She’s a retired art teacher who lives behind the market and runs an Organic Farm Camp in the summer for local kids. She took over the market about 2 years ago from long, long time owners who’d run the town’s General Store. There were dips and bumps in the road but now she is turning the store into a destination.

Mary has been gluten intolerant all of her life. She’s harnessed that and put it to work at her store. She’s converted all her baked goods and ready-to-heat frozen family dinners to be gluten free as well. There are things at Mary’s store I have not had since becoming gluten free over 7 years ago. Family style lasagnas, pot pies of different varieties, foccacia, pies, muffins, cookies, quiche (all baked in the store’s kitchen mind you), exotic wild game sausages, Chicken Cordon Bleu made fresh by their butcher Mark. Mary outed one of her sons who’d requested a care package of cookies but ‘not any gluten free cookies’. She sent him a box full, unlabeled, only to get a call raving over them and sheepishly asking if they were really gluten free. They were and a point was proven for any fearful of gluten absence compromising the quality or taste of food, at least on Mary’s watch. 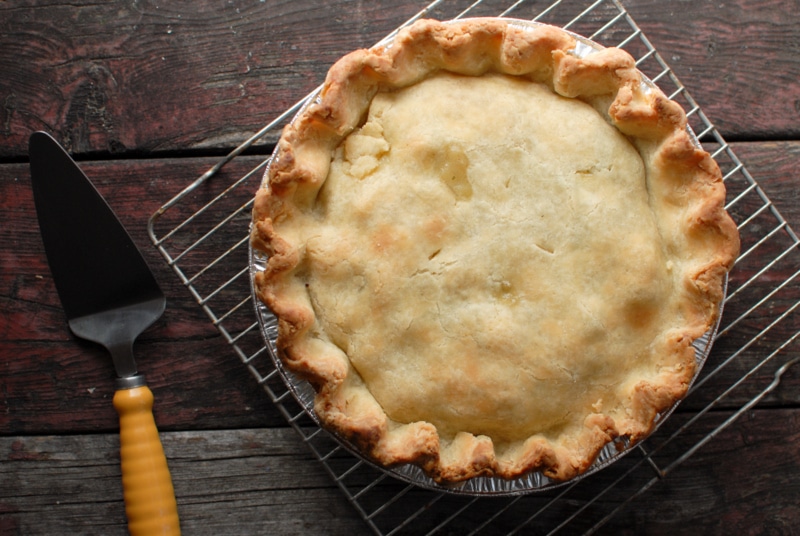 Mary’s Gluten Free Buffalo Pot Pie. ‘Out of This World’ would be an understatement about how delicious this is. She makes a number of different pot pies with different meats.

The store houses a large community table in the front for anyone picking up food and wishing to sit for a nosh. Expresso drinks are available as well and there are outdoor tables and chairs for warmer weather. Being the true General Store for the little town of Hygiene it has all one would need for normal grocery shopping. Fresh produce (which Mary keeps local during the growing season), perishable and non perishable goods.

The store is punctuated throughout by completely charming vintage finds which I learned are sold by a friend’s Aunt (Chrystal DeCoster) who has a fantastic eye and sense of aesthetics. For any vintage addicts, this is worth a trip and adds to the ambiance of the store.

We chatted about GMO’s. Local politics. Mary’s plans for gluten free classes toward the end of March or in April. How people can call ahead and order food specially for pick up. That customers drive for long distances to stock up on her delectable homemade foods which have been frozen. That she got the local guy who makes Green Chili to make it gluten free for her store.

I pulled an animal tarot card from the deck on her community table (the Owl which stands for Omens, suggesting I look for repetitive themes in my life and regard them; maybe the fact that I can’t ever get the family laundry done and put away?). We met her 29 year long friend who baked for the first Alfalfas in Boulder and is now the experimental gluten free baker in residence churning out Honey Oatmeal bread, Olive Rosemary Thyme bread, Sourdough, amongst the rest of the unending fabulous baked goods.

With a twinkle in her eye Mary confessed ‘I wrote down this morning I needed someone to write an article about the store and here you are!’ My friend volunteered to return the following day to do a press release for her which Mary eagerly offered a pie. Mary then shared she’d decided she needed a website the day prior, wrote it down and a woman she knew called that day and told her she could do a website in trade for gluten free food. It’s old school commerce with a bit of Mary’s magic. And she is; magical. So was her Buffalo Pot Pie. 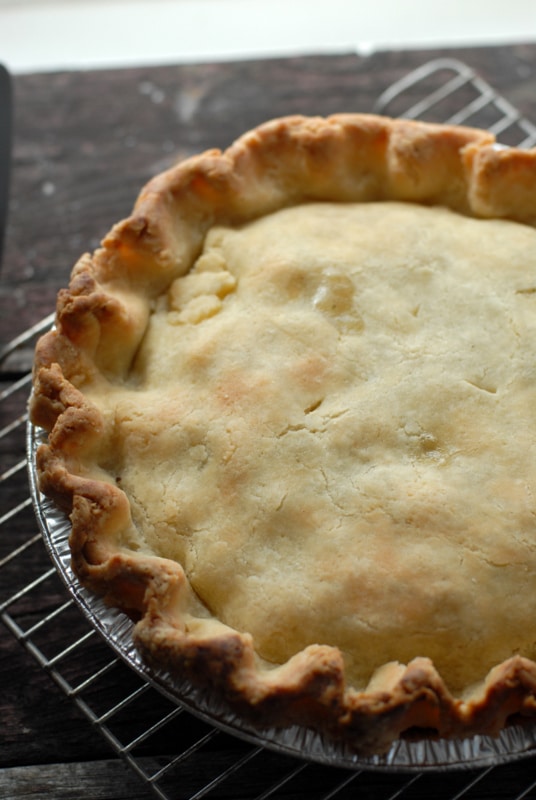 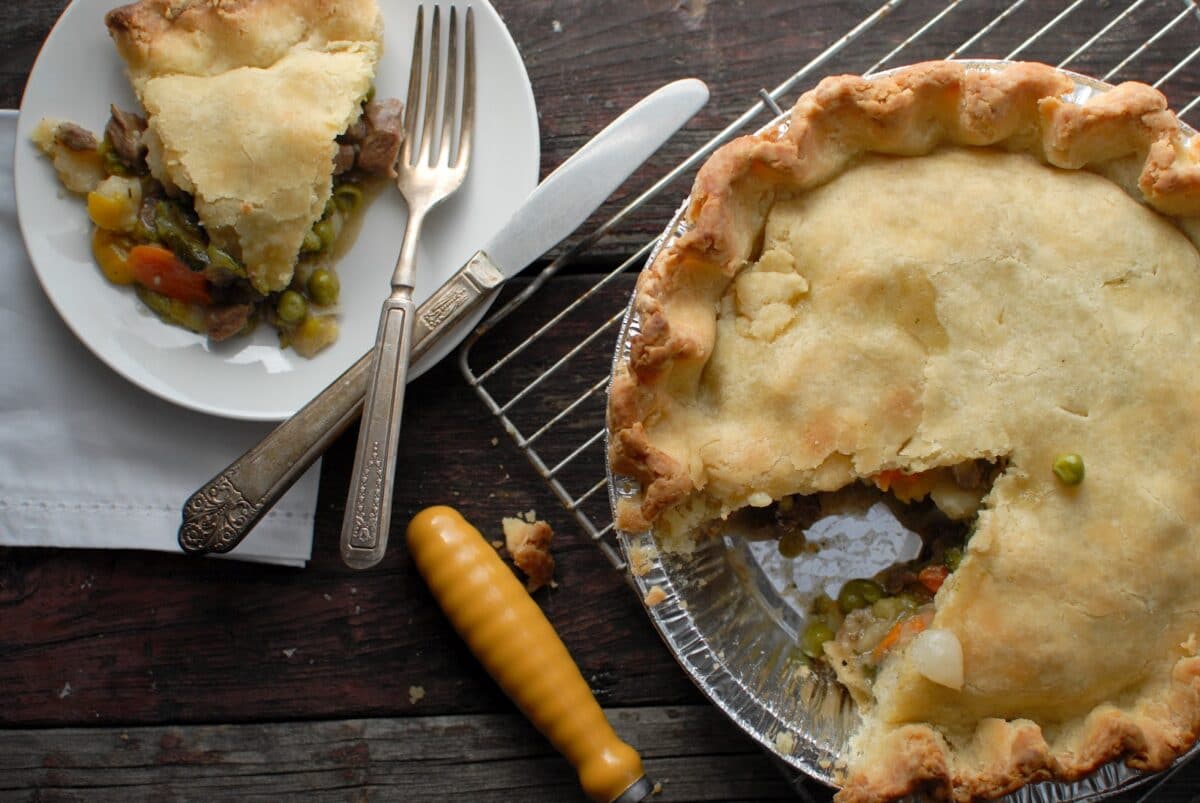 I have not had a pot pie since becoming gluten free and as I look back I do not believe I have ever had one freshly made.  I am so glad I brought one home because all the wonderful things I felt about Mary’s have multiplied by 200 percent in tasting this dish.  Mary did mention that she has a good pie crust recipe; that is an extreme understatement.  Mary has the best pie crust recipe I truly have ever tasted, gluten or gluten free.

A gluten diner was involved with our taste testing, also commenting about how incredibly good the pot pie was as well as that he’d never had one freshly made.  This is a completely different animal my friends; full of lean buffalo meat, abundant vegetables, both those traditional to pot pie and more.  The crust…..well I think Mary needs to begin selling the crust frozen.  I would not have called myself a pot-pie-kinda-gal; until now.  Mary makes good, honest food and the Buffalo Pot Pie is a prime example of that.

As I devoured my piece of pie I was calculating when I could drive back out to stock up for my freezer. Forget the gluten-free part; this is the best thing you will have eaten in a long time, gluten or not.