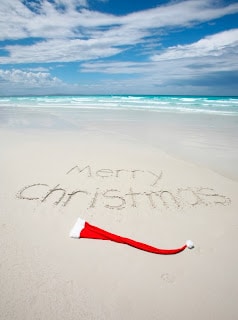 I had the opportunity to travel to Fiji a number of years ago where I was fortunate to meet my friends Janis and John from New Zealand. We clicked instantly and it became a joint vacation of sorts. I can say many things of Janis: she is an artist in so many forms, a socio-anthropologist in her view of people, adventurous in spirit and with her time, warm and THE funniest person on the face of the planet. I do not ever remember laughing harder than during our time in Fiji.

We’ve finally had our first snow of the season and it made me wonder what Janis does for Christmas. After all it’s summer there. Despite having spent random Christmases in more temperate regions myself it seems it should be a winter holiday everywhere. It somehow seems perverse to imagine people in bikinis and enjoying the early season spoils of their gardens while Santa is shimmying down chimneys.

Knowing she’d come from England originally I imagined it must have been a big adjustment. In one of our Skype chats when I was asking 4,000 questions about how they spend their holidays, what they eat and how it is for her, I convinced her as part of my international posse to write a guest post about this. I thought as we all toil toward Christmas a dose of holiday arm chair travel might be a welcome mental sojourn. Please note the American ‘translation to her Kiwi-speak found italicized in parenthesis!

I moved to New Zealand from the UK in 1985. The most difficult aspect of culture change for me was Christmas. In London the holiday had been cold – even snowing. And all the typical holiday food followed suit – turkey, roast potatoes, sprouts. In New Zealand these foods are inappropriate (although it doesn’t stop some expats from continuing with the full works). Most people spend Christmas day on the beach or out in the garden.

Over the years, we have developed our own traditions based on the produce that is around at the time. The star of the show is always strawberries. They are sold at farmer’s markets, PYO (Pick Your Own) from farms and at the side of the road from early November until February. They are in enormous demand at Christmas!

Here is the food that we have planned for this year…..it’s pretty much the same most years actually!

We eat this as we open our presents – a bit of a ritual in our house! 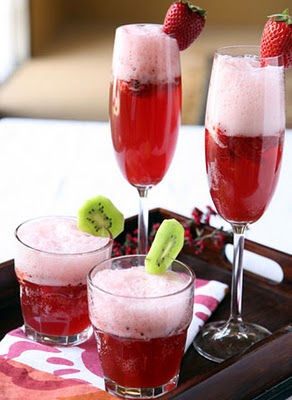 This is usually a BBQ featuring:

Then we drink wine, play games and talk until bed – then it all starts again on Boxing Day!

Traditional Christmas pudding is a bit too much for a hot day. This ice cream version looks similar and is great with strawberries. (Note:  though this photo is of Ice Cream Christmas Pudding it is not an exact replica of this recipe).

When you serve it, remove the film and sieve icing sugar over the top – or melt white chocolate and pour it over the top like snow. I put a sprig of holly on the top of mine and serve with strawberries and strawberry coulis.

Not a weight-watchers dessert but decadent! 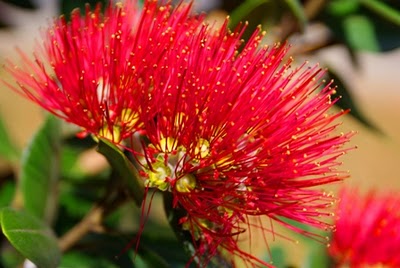 Janis explained they do keep traditionally decorated pine trees indoors though look to their seasonal surroundings for the traditional green and red ‘color scheme’; the New Zealand Christmas Trees which line the beaches where they would picnic on Christmas or the strawberry-kiwi topping on the Pavlova. She went on to describe how beastly hot and humid it is right now. That you can almost see the peppers growing, how she’s looking forward to making limoncello this summer and to the blooms of her frangipani cuttings. This all sounds like a dream sequence from a movie as I cannot get the first winter’s chill from my hands and wonder how many layers to put on for a Mid Winter’s Festival tonight at a local biodynamic farm. Could we really be readying ourselves for the same holiday?!

I so love her devotion to all things local, organic, ‘do it yourself’ and green. It reinvigorates that within me as it becomes bogged down by ordinary life logistics. And I think I’ll start by making that Ice Cream Christmas Pudding!

A bit more on Janis…

Janis first visited New Zealand in 1983 and loved it; she moved there from the UK in 1985 where she met and married her ‘Kiwi’ husband John. Janis and John live by the beach in Orewa growing as much as they can in pots! They love growing, cooking and organic principles. They have recently bought 5 acres of land at Matakana, about an hour north of NZ’s largest city, Auckland. They plan to build a sustainable, eco friendly life in the village and sell their produce at the local farmer’s market.

Janis’s day job is as a speaker and business facilitator. Her specialist subject area is workplace wisdom and development of better thinking. You can see her work at www.workplacewisdom.co.nz.

Her knowledge of the brain has been enhanced by her experience of a benign brain tumour in 2007.  She has successfully rewired her brain through practice and despite physical brain damage she is brighter than before her operation!  She is a living example of the brain’s ability to rewire itself endlessly throughout our lives – as long as we try! Her thoughts about this and other topics are regularly posted on her blog www.janisgrummitt.com and her art is on www.artfind.co.nz
« Pomegranate Martinis
Coffee Cake with Brown Sugar Cinnamon Ripple »