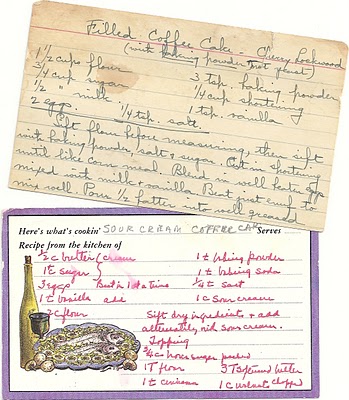 Have you ever noticed whatever traditions one is raised with become cemented in their consciousness as the gold standard for how things should be done?  I have found the same for holiday traditions.  The unfolding of Christmas morning is well ingrained from my upbringing and is still upheld in my current life.  Stocking gifts are always wrapped in white tissue paper.  Stockings are opened first thing and followed by coffee (for adults) and coffee cake.  Just a little bite before diving into opening the ‘big gifts’ underneath the tree which is followed by a more formal, hot breakfast.
My maternal Grandmother died about four years ago in her early 90’s.  She lived a rich and active life.  When we went through her belongings I found myself desiring items that were very ordinary.  I took her vintage red Swingline stapler.  A small white alarm clock.  Things that would slip into my everyday living and keep her present.
I also have her recipe box.  The old school tin box stuffed with handwritten treasures spanning decades of cooking.    Though I did not think of her as a culinary devotee I recently pulled out the box and went through all the recipes.  It was like a walk amongst  my family lineage.  There were recipes from my Great Grandmother in her handwriting as well as a myriad of other relations.  In this day of everything cyber, holding a piece of paper with their actual handwriting is like being in the kitchen with them. 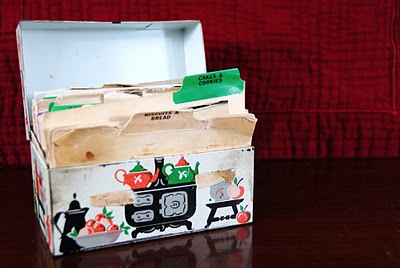 This year in preparation for the mandated Coffee Cake on Christmas morning I decided to try some recipes from Nana’s recipe box.  I selected one that was Nana’s (my grandmother) and one that was Grammy’s (Nana’s mother, my great grandmother).  I made them both not knowing what to expect.  I found myself wondering about when they made them?  In the case of Grammy’s it could have been mid last century or earlier!  I was struck by their similarities.  Wondering in the case of Grammy’s when baking powder and baking soda came on the baking scene with her overt notation on the recipe card that yeast was not used as though one might not know that.  It was refreshing to see no preservatives, no artificial colorings; just real food.
I wonder about YOUR food rituals, my cherished readers?  What are your tried-and-true food habits for the holidays?  How do you spend your Christmas Eve?  Christmas Day?  Boxing Day?  Do tell!
Whether you have Coffee Cake on Christmas morning or not, I’m passing along Nana and Grammy’s recipes.  Happy holidays from me and my maternal lineage of cooks! 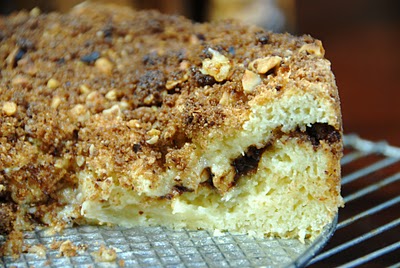 Filled Coffee Cake (Grammy’s Recipe)
Ingredients (cake):
Streusel Mixture:
·         ½ cup brown sugar
·         2 tablespoon flour
·         2 teaspoons cinnamon
·         2 tablespoons melted butter
·         ½ cup nuts (I used chopped hazelnuts because I had them; walnuts and pecans would also be great)
Gluten Free modification:  I substituted gluten free flour and added 1 ½ teaspoon xanthan gum.
1.      Sift flour before measuring, and then sift with baking powder, salt and sugar.
2.      Cut in shortening until like the consistency of corn meal.  I did this in the standing mixture but you could use a pastry whisk to cut it in the traditional way.
3.      Blend in well-beaten eggs mixed with milk and vanilla.  Beat mixture just enough to mix well.
4.      To make Streusel:  Mix sugar, flour and cinnamon.  Blend in butter and nuts.
5.      Pour  half of the batter into a well greased and floured 6x10x8 inch square heavy pan (Note: these measurements obviously do not make a square pan nor did the volume of the batter appear it would fill something of this size.  I used an 8 inch round pan with a removable bottom which worked great).  Sprinkle with half the Streusel mixture.  Add remaining batter and put remaining streusel over the top.
6.      Bake 25 to 30 minutes at 375 degrees (Note:  I’d cook this at least 30 minutes or until a toothpick comes out clean). 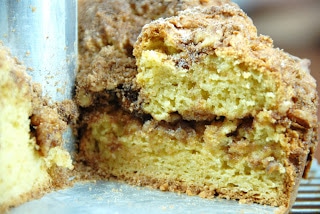 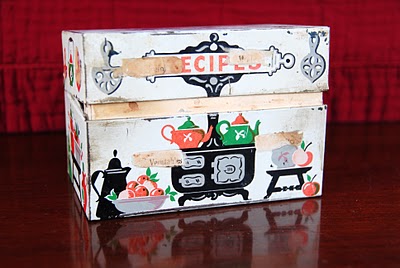